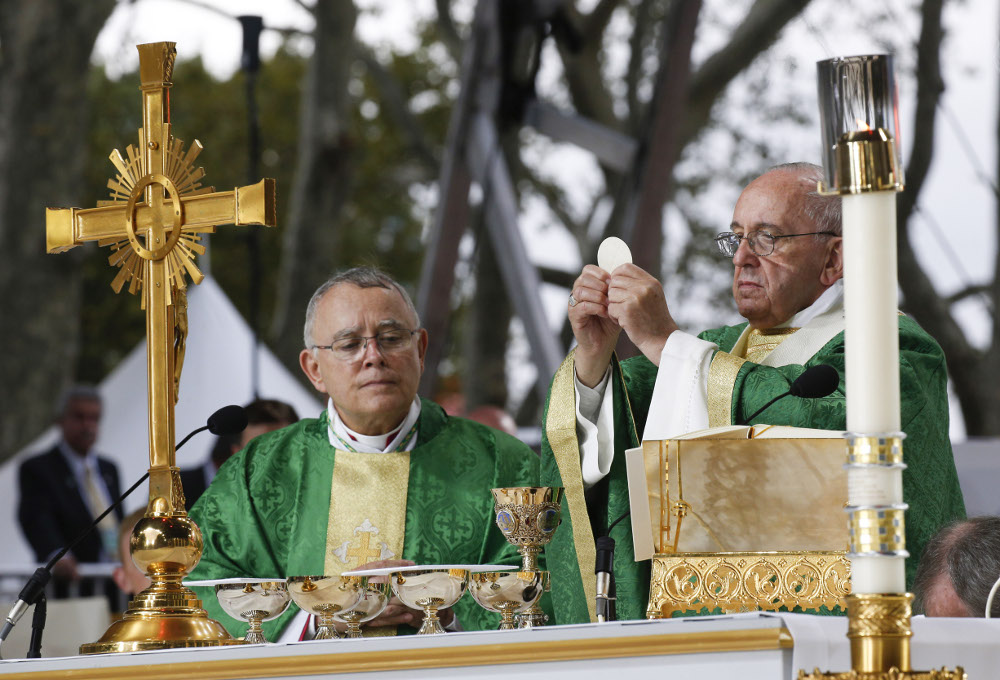 In this 2015 file photo, Pope Francis raises the Eucharist as he celebrates the closing Mass of the World Meeting of Families in Philadelphia. With him at the altar is Philadelphia Archbishop Charles Chaput. The Pennsylvania archbishop is asking the pope to call off the synod of bishops in Rome on the concerns of young people in the church, set for this October. (CNS/Paul Haring)

Philadelphia Archbishop Charles Chaput is asking Pope Francis to call off the Synod of Bishops on young people this October to focus instead on the life of the bishops.

"I have written the Holy Father and called on him to cancel the upcoming synod on young people. Right now, the bishops would have absolutely no credibility in addressing this topic," the archbishop said at an Aug. 30 conference at Philadelphia's St. Charles Borromeo Seminary, according to a report by the website LifeSiteNews.

Ken Gavin, spokesman for the Archdiocese of Philadelphia, confirmed the archbishop sent the letter to the pope, but he offered no additional comments.

The archbishop gave his comments about canceling the synod during a panel discussion called the "Cardinals' Forum," sponsored by the Cardinal John Foley Chair of Social Communications and Homiletics and the Cardinal John Krol Chair of Moral Theology, both at the seminary.

The archbishop, who is set to participate in the synod on youth, was one of three panelists speaking on the topic "Young People, the Faith and Vocational Discernment," the theme of the Oct. 3-28 synod in Rome.

Hundreds of bishops and young people representing youth from across the globe will engage in discussions at that meeting and typically, the pope attends some synod conferences. After the gathering's conclusion, the bishops make recommendations to advise the pope as he formulates pastoral policy to address the specific issues discussed.

Pope Francis had previously confirmed Chaput, chairman of the Committee on Laity, Marriage, Family Life and Youth of the U.S. Conference of Catholic Bishops, as one of only five American bishops to attend the synod, all of whom were elected by their peers in the USCCB.

Calls for reform in the Catholic hierarchy have risen throughout the summer as the clergy sexual abuse scandal has intensified, with bishops across the globe coming under scrutiny for their potential role in covering up cases of abuse of children and young adults.

And confidence in the credibility of Catholic bishops has been eroding in the wake of allegations against the former Washington Archbishop Theodore McCarrick, the Pennsylvania grand jury report on 70 years of clergy child sexual abuse in the state and the explosive letter of Archbishop Carlo Maria Viganò, the former U.S. papal nuncio, alleging the cover-up of McCarrick's abuse by bishops in the United States and in the Vatican.

In an Aug. 30 letter to the pope, Dallas Bishop Edward Burns asked for an extraordinary synod to address issues in the latest Catholic clergy sex abuse crisis.

"The current crisis of sexual abuse by clergy, the cover-up by leaders in the church and the lack of fidelity of some have caused great harm," the letter said. It suggests that this synod should include topics such as "the care and the safeguard of children and the vulnerable, outreach to victims, the identity and lifestyle of the clergy, the importance of healthy human formation within the presbyterate/religious community, etc."