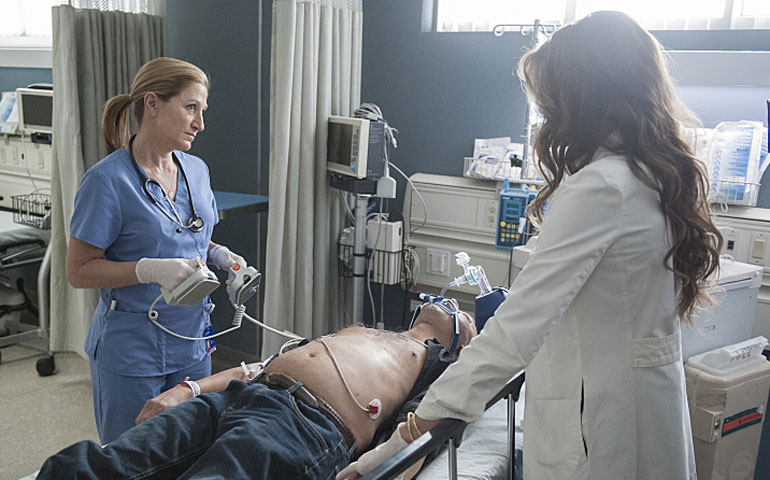 "Make me good, God, but not yet," says the female voice-over, paraphrasing St. Augustine who, as the speaker notes, "knew there was good in him, and he knew there was not so good. And he wasn't going to give up his earthly pleasures until he was good and ready."

That's Jackie in a nutshell: She does a lot of good, and she hurts a lot of people, too -- all while playing God in life-and-death situations at a Catholic New York City hospital called, not coincidentally, All Saints.

Although "Nurse Jackie" originally ran on Showtime from 2009 to 2015, all seven seasons are now available on Netflix for your binge-watching pleasure. With episodes titled "When the Saints Go," "Serviam in Caritate" (Latin for "I will serve in love") and "I Say a Little Prayer" (the final episode), this series definitely has a Catholic sensibility and even has a character -- a homeless, seemingly mentally ill man -- who thinks he's God.

I'm not generally a fan of hospital shows, but the deep religious and human questions in "Nurse Jackie" are compelling. The series' overarching question seems to be whether Jackie, who is both compassionate and selfish, is a saint or a sinner.

Some of her sins are pretty blatant. There's the drug use, which involves plenty of deception and theft, not to mention occasional negligence toward her two daughters. She is also having an affair with the hospital pharmacist who supplies her with drugs.

But then there are times she seems to be a savior, literally rescuing patients from the brink of death, even if it means playing by her own rules to thwart the bureaucratic health care system or work around incompetent doctors or administrators. You can't help but cheer for her when she fights the new boss from the corporation that takes over the hospital in Season 4.

She also seems to be an occasional good friend to Dr. Eleanor O'Hara, gay nurses Mohammed "Mo-Mo" De La Cruz and Thor Lundgren, and a tough but ultimately loving mentor to newbie nurse Zoey Barkow. She even becomes close to some of her adversaries, such as Dr. Fitch Cooper, administrator Gloria Akalitus and even that corporate boss, Dr. Mike Cruz.

Jackie and her hospital co-workers can often be found sprawled across the red-cushioned pews under the watchful eyes of religious paintings and statues in the hospital chapel, taking a break from the craziness of the ER and considering their own lives in light of the ones they save, or lose, at work.

When that chapel is deconsecrated by the diocese, which is pulling the church's support for the hospital, the loss of the saint statues becomes symbolic. Akalitus, who loses her battle with the diocese to keep the statues, decides to steal the statue of Virgin Mary.

As Jackie and her colleagues watch the statues go, O'Hara takes a sip of whiskey from a flask, declaring, "Last call for all that is good and holy."

In this and later seasons, it becomes clear that Jackie's drug addiction prevents her from being a real heroine to anyone, including her friends, colleagues and daughters.

Meanwhile, her older daughter, Grace, is developing an anxiety problem and becoming somewhat obsessed with saints herself. For a school production ("It's not a pageant, it's a litany," she tells her mom), Grace chooses to dress up as Christina the Astonishing, a Belgian woman given to fits of ecstasy, most likely caused by her epilepsy. At her funeral, Christina reportedly came back to life and levitated to the ceiling of the church.

Grace, who will later be haunted by some of her mother's sins, seems to be speaking directly to Jackie when, after describing Christina as the patron saint of "insanity and lunatics," she quotes from Psalm 102, the prayer of the afflicted: "For my days vanish like smoke, I am like an owl in the desert among the ruins. I have mingled my drink with weeping, and my days are like the shadow. Pray for me."

Jackie surely needs prayers as she attempts to overcome her addictions. By the sixth and seventh seasons, some viewers were growing weary of the storyline, but the series' ending is not neat and tidy.

The final episode begins with a prayer. Jackie, alone in a church, begs, "Make me good" -- this time without the "but not yet." Yet the "Amen" to her prayer is to pop a pill.

In the next scene, her younger daughter, Fiona, in preparation for her confirmation, can't remember the sixth sin of the Holy Spirit: final impenitence. Is Jackie able to repent and become the good and saintly person she wants to be? "Nurse Jackie" doesn't answer that question, but it does show that it's not easy -- for her or for any us.

A version of this story appeared in the Mar 11-24, 2016 print issue under the headline: Nurse Jackie: saint or sinner?.