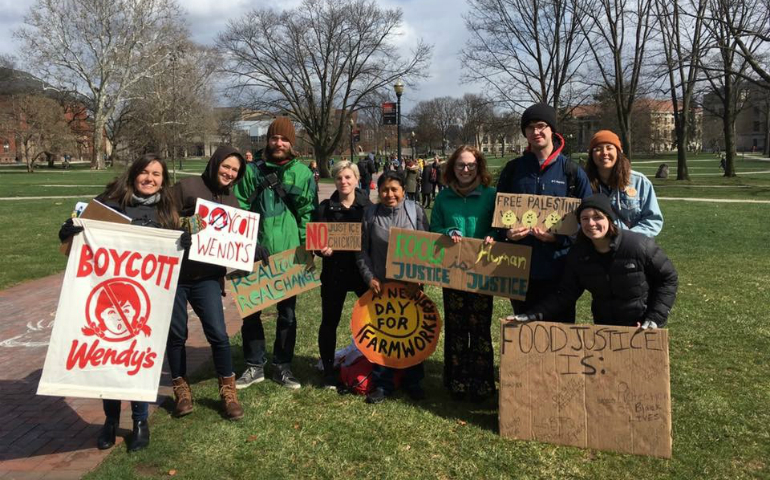 Student protesters at Ohio State University participate in a weeklong fast against Wendy's in March 2017 in solidarity with the Coalition of Immokalee Workers. (Courtesy of Rachael Birri)

Rachael Birri hasn't eaten anything in nearly a week. She's only been drinking water and tea, but the liquids don't prevent her stomach from rumbling during class.

Birri, a freshman majoring in environmental science at The Ohio State University in Columbus, Ohio, is one of 19 students who started fasting March 20 in response to the university renewing a lease that allows fast-food chain Wendy's to operate a restaurant inside the Wexner Medical Center on campus.

In November, Ohio State extended its lease with Wendy's, which is headquartered in the nearby suburb of Dublin, Ohio.

According to Birri, Ohio State officials had said the school wouldn't renew the lease unless Wendy's joined the Fair Food Program. "Extending the lease was a violation because those requirements were not met," Birri said

Since 1993, the Coalition of Immokalee Workers has been lobbying to improve rights for farmworkers. The organization, based in Immokalee, Florida, seeks to eliminate slave labor in farms, gender-based violence, sexual harassment and human trafficking.

In 2011, the coalition launched the worker-driven Fair Food Program, a partnership among farmers, farmworkers and food companies that ensures livable wages and humane conditions for produce pickers. The program was designed and implemented by workers, and now protects thousands of farmworkers.

Under the Fair Food Program, every farmworker must punch in and out of work to keep track of how many hours per week they're working. They are guaranteed a minimum wage, even if they don't meet their daily quota. The program has also instituted a 24/7 hotline for farmworkers to report any violations. Participating retailers in the program include Taco Bell, McDonald's, Burger King, Walmart and Whole Foods Market.

Wendy's, however, has yet to join the Fair Food Program.

"We support the goals of any organization that seeks to improve human rights, but we don't believe we should pay another company's employees — just as we do not pay factory workers, truck drivers or maintenance personnel that work for our other suppliers," said a statement on Wendy's blog, The Square Deal, posted Oct. 17, 2016.

The blog post says it used to purchase its tomatoes from Florida in the colder months, but now gets them from Mexico. In a rebuttal to The Square Deal's blog post, the Coalition of Immokalee Workers said importing tomatoes from Mexico is unethical, citing Richard Marosi's four-part series of articles on the slavery conditions Mexican farmworkers face that appeared in The Los Angeles Times in 2014.

"We require responsible business practices in our supply chain and will continue to work to bring greater transparency to these practices," Schauer said.

But according to de la Cruz, third party monitoring provides no kind of actual enforcement.

After 11 years as a farmworker, de la Cruz said working conditions are much better now thanks to the Fair Food Program. She said it's now common for farmworkers to work seven to nine hours per day, depending on the weather condition and current demand for tomato production. Farmworkers also no longer have to start working at extremely early hours and can take breaks when needed, something many farms outside of the program do not offer.

De la Cruz has been in Columbus for about a month educating consumers about Wendy's' alleged exploitation of farmworkers and the coalition's ongoing 12-city, two-week Return to Human Rights Tour. The tour ends March 26 in Columbus, when Birri, de la Cruz and other Ohio State students and community members will greet the farmworkers before marching at the Parade for Human Rights in Goodale Park. De la Cruz said she will return to Immokalee with her cohorts after the parade concludes.

Before the tour bus arrives, students in Real Food OSU and the Ohio State Student/Farmworker Alliance have been supplementing their hunger strike by staying in a tent on campus to share their cause with other students and hanging outside university president Michael Drake's office with the hopes of making direct contact with him.

Ohio State is aware that 19 of its students are participating in a hunger strike. Benjamin Johnson, Ohio State's director of media relations, said in an email to NCR that the university doesn't condone "the use of any potentially harmful actions that could jeopardize the health and well-being of our students." Johnson mentioned the university arranged for students to meet with Wendy's directly, but they declined the offer.

The university's administration "seemed so eager to get us there," Birri said. "We felt like it was a way to dissuade us from doing the fast and to be patronizing about what we're doing. And for the meeting to be out of eyes of public record it … it didn't feel right. There's no need for discussion right now, only decisions."

Students met with Ohio State officials March 24 to discuss the university's contract with Wendy's, but walked out of the meeting after 40 minutes when they were left with ambiguous answers. Drake, the president of the university, was not present.

Schauer also said Wendy's is aware of the current protests, and said they are a "business matter" for the Coalition of Immokalee Workers.

"We find it irresponsible for this group to support their commercial agenda by encouraging young people to forgo nutrition and endanger their health," she said.

Birri said she and other Ohio State students drew inspiration from the farm labor organizing of Cesar Chavez, who used fasting as part of his strategy. Chavez co-founded the National Farm Workers Association with Dolores Huerta in 1961. During his lifetime, he led union members and farmworkers in multiple hunger strikes as a nonviolent way to achieve humanitarian treatment, including fair wages and access to clean water, education, housing and medical care.