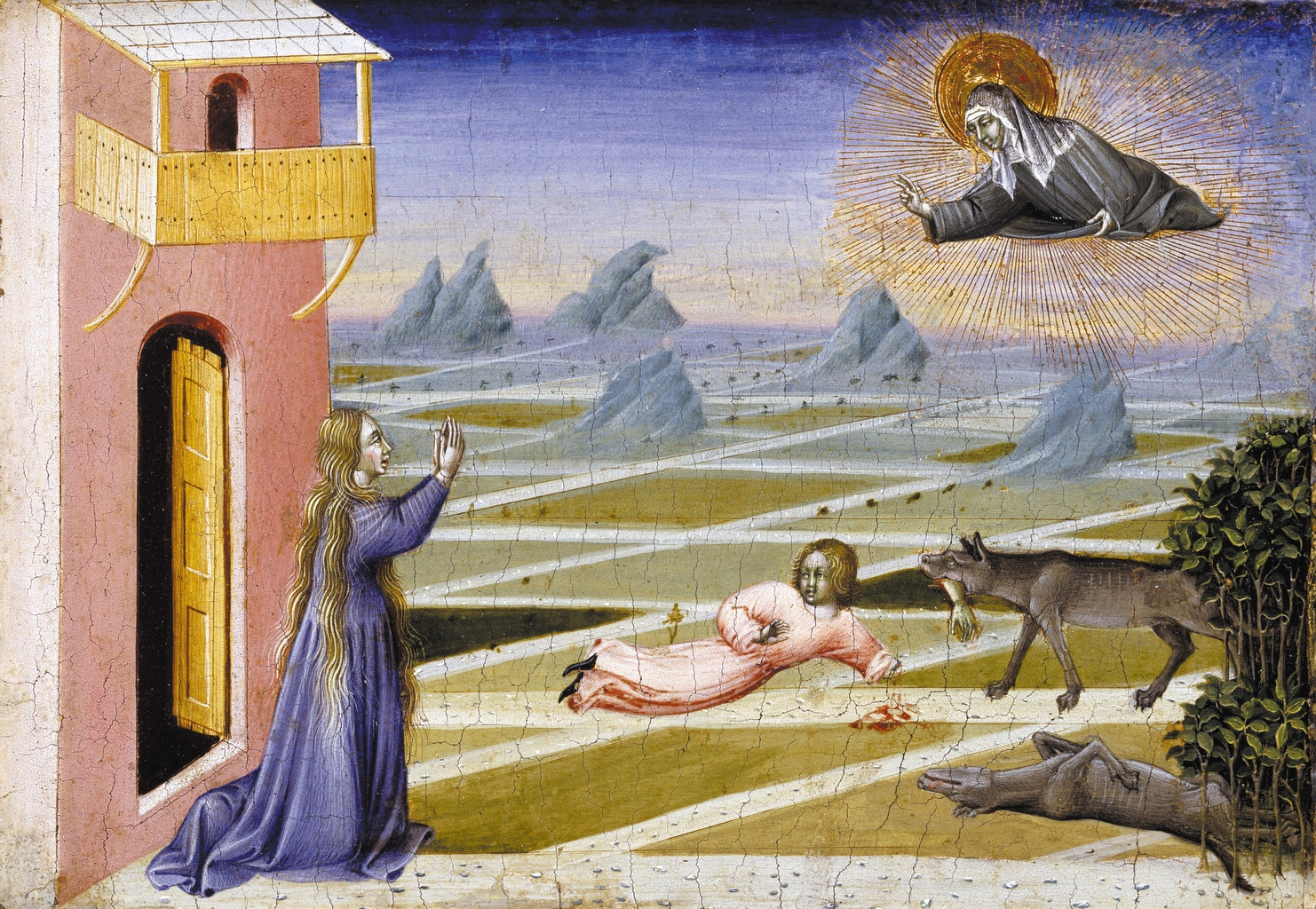 "St. Clare Rescuing a Child Mauled by a Wolf" by Giovanni di Paolo is pictured on exhibit at the Frist Center for the Visual Arts in Nashville, Tennessee in 2014. (CNS/Courtesy The Museum of Fine Arts, Houston/Thomas R. DuBrock)

by Julie A. Ferraro

As an avid student of Franciscan topics for nearly 50 years, I have always been puzzled by the wealth of information made available about St. Francis of Assisi and the limited resources on St. Clare.

Franciscan Sr. Margaret Carney, in Light of Assisi: The Story of St. Clare, seeks to remedy this imbalance by compiling a biography of St. Clare that will introduce her to those new to the Franciscan tradition and reveal previously unknown facts to those — like me — who have yearned to know more about this founder of the Poor Clares for years. 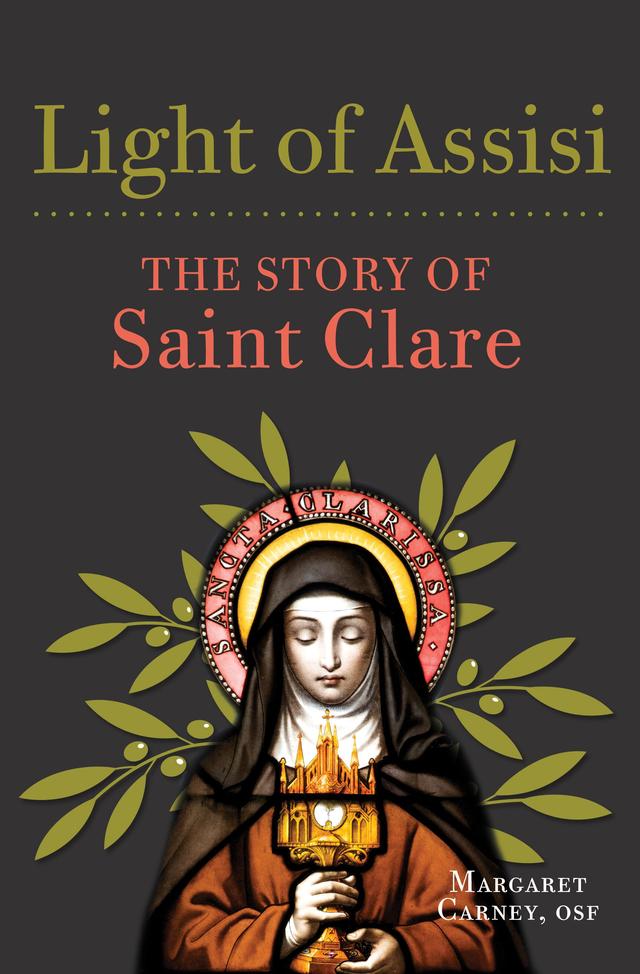 A member of the Sisters of St. Francis of the Neumann Communities, Carney is well suited to the task. She studied theology and Franciscan topics at Duquesne University, Pittsburgh, St. Bonaventure University in New York state and the Pontifical University Antonianum in Rome. Her background includes being part of the commission that revised the Rule of the Third Order Regular in 1982, and researching the Rule of St. Clare. Following her time as director of the Franciscan Institute (1999-2004), she was a founding member of the Commission of the Franciscan Intellectual Tradition. She served as president of St. Bonaventure University from 2004 to 2016 and, in retirement, continues to share her scholarship with universities and organizations across the United States.

Outlining in her foreword the purpose for her work, Carney touches on Clare's uniqueness, while avoiding the modern interpretations scholars often imposed on subjects whose time and culture would not have allowed for such decisions.

Carney sums up Clare's importance — beyond her relationship with St. Francis — in how the 13th century saint showed that it was not necessary to follow someone else's example to achieve sanctity, but "we need only have the courage to unlock what is within us, to spend our days powered by the graced anointing we already possess."

At the front of the book, a map shows Assisi and the churches in the district that are referenced in the text, making it possible to envision Clare's travels.

In part one, Carney's brief chapters cover the history of Clare's noble family, and Francis' middle-class household, along with the period from Clare's birth to Francis' death. Part two deals with the period after Francis' death, when Clare "came into her own" as it were. Part three deals with her final years, her death and the efforts toward her canonization.

Carney writes in an open and frank style, even using 21st century terms and phrases — such as "the room where it happened" from the Broadway musical "Hamilton" — to describe the political situation in Assisi at the time of Clare's birth or events during her life. She even refers to "Hamilton" directly, in the chapter between part one and part two, comparing how Francis' death did not end Clare's story, but she continued on, just as Eliza Hamilton carried on her husband's legacy after the infamous duel with Aaron Burr.

Carney presents a Clare who is educated, unusual for women in that period of history, skilled at diplomacy and interactions with high-ranking officials of the Catholic Church. Yet, in her simplicity and faith, she works with needle and thread, performs manual labor and is attributed with miraculous cures.

In instances where the historical records do not provide information, Carney poses questions, echoing the readers' wonder about the unknown details. One of these questions, in which she asks how Clare managed to leave her home that Palm Sunday night in 1212 without being detected, serves to dispel the previous accounts of her departure by the "door of the dead." Carney writes, "No such doors existed, however, and that appealing bit of theater has been cut from modern accounts."

The use of direct quotes from Carney's source material are limited in the text, though she recommends readers consult them: Clare of Assisi, The Lady: Early Documents, and volumes 1 and 2 of the four-volume Francis of Assisi set, all published by New City Press between 1999 and 2006. 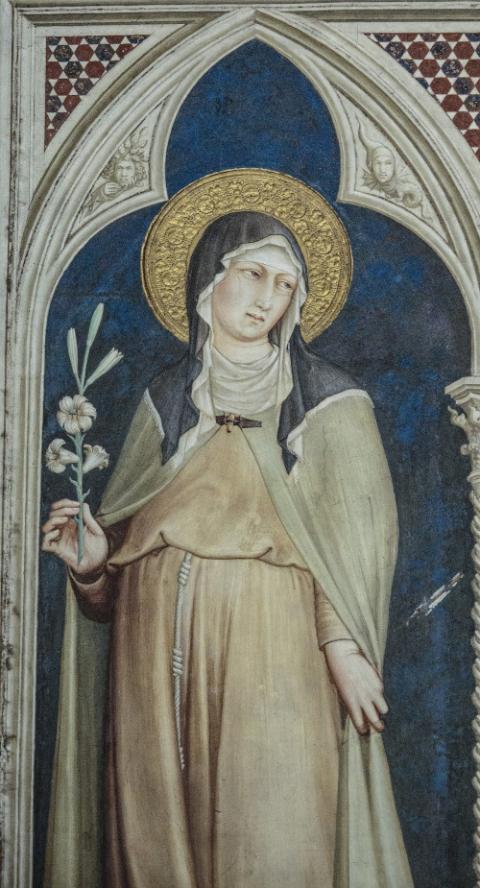 This mosaic in Assisi, Italy, photographed May 28, 2015, depicts St. Clare of Assisi holding a palm frond, a symbol of her entering religious life. (CNS/Octavio Duran)

Especially inspiring is how Carney emphasizes Clare's willingness and determination in the face of the church's hierarchical attempts to make her and the Poor Clares conform to their idea of how women religious should live. The text touches on Clare's relationship with Elias of Cortona, general minister of the friars after Francis' death, and her correspondence with St. Agnes of Prague who, herself, had to stand up against an oppressive male-dominated society to secure official approval of her community of women in following Clare's example.

In her afterword, Carney continues to deliberate about the relationship between Francis and Clare, postulating that the Two-Part Inventions of Johann Sebastian Bach, with their musical "imitative counterpoint" might be the best example of the saints' interactions.

From an editorial standpoint, Carney does occasionally repeat information in the text, when it might not be necessary to do so. There are a number of grammatical errors — "insure" instead of "ensure," for example — that should have been corrected by the proofreaders or copy editors (a pet peeve of mine).

Carney extensively researched her subject and, throughout the text, dispels myths about Clare — commonly circulated when promoting the holiness of prospective saints in that era. She lists the miracles Clare performed, clarifying that the monstrance bearing the Eucharist to protect against the Saracens, prevalent in paintings and statues of Clare, was actually a much smaller pyx, yet no less effective in turning those invaders aside.

This book is a worthy addition to the ever-growing library of resources about a humble woman who sought only to follow in the footsteps of Jesus, in loving service to all.

A version of this story appeared in the Oct 1-14, 2021 print issue under the headline: Who was St. Clare? New book delves into the life of 13th-century saint.