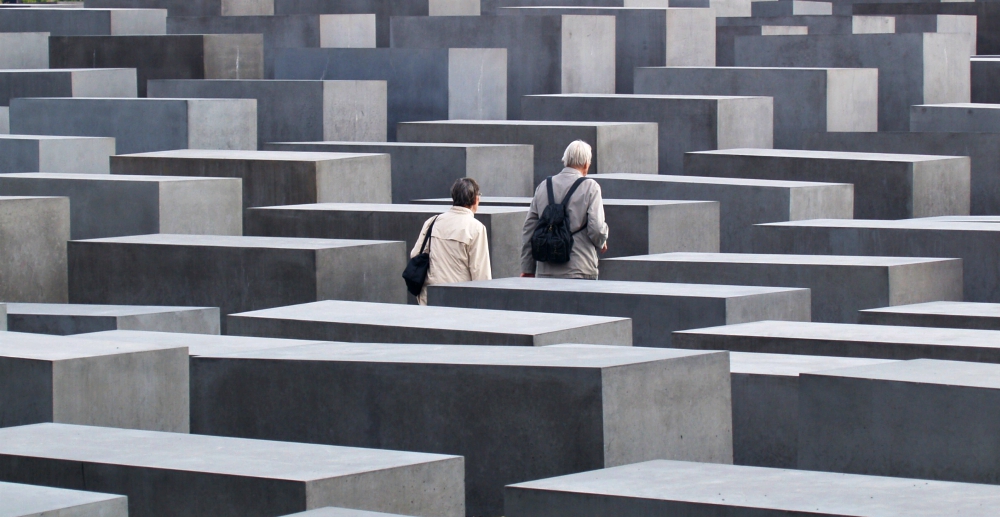 A couple walks through the Memorial to the Murdered Jews of Europe in Berlin. (Wikimedia Commons) 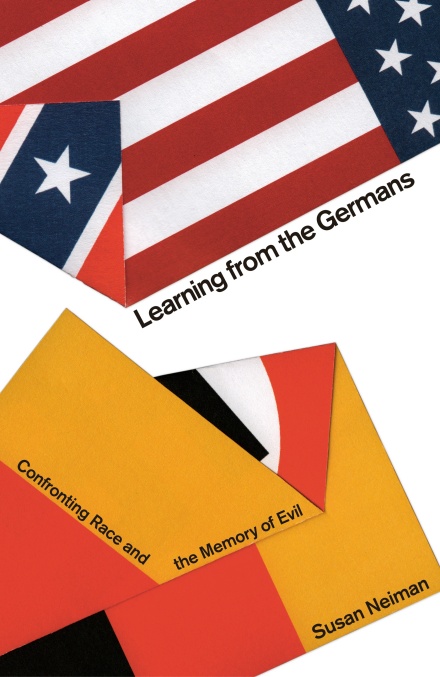 LEARNING FROM THE GERMANS: RACE AND THE MEMORY OF EVIL
Susan Neiman
416 pages; Farrar, Straus and Giroux
$30.00

Consider August 2015: As Britain and America turn insular, Chancellor Angela Merkel opened Germany to 1 million refugees. "Disgusted by a right-wing attack on a refugee shelter, thousands of Germans came out to welcome refugees by the trainload," Susan Neiman, an American scholar in Berlin, writes in Learning From the Germans. "The wave of support was truly popular, engulfing hip young artists and staid, settled shopkeepers alike."

Then she poses the hard question, one that has long vexed many U.S. white Southerners: "Do the sins of the fathers contaminate the children? And if so, for how long?"

As Neiman examines the reunification of East and West Germany since the 1989 fall of the Berlin Wall, a long-delayed reckoning with Nazi genocide gives way to a never-again ethos of human rights. Neiman spotlights Vergangenheitsaufarbeitung, a German term meaning "working-off-the-past" that threads through these pages, as the politics of memory shape an enlightened public square.

The author then embarks on a journey through Mississippi and parts of the Deep South, assessing the Lost Cause mythology by which hundreds of Confederate statues went up in the decades after Reconstruction and a mass denial of slavery took hold.

Today, even Mississippi dances to the bells of "cultural economy" and markets itself as "home of the blues." It is also last on just about every dismal index of social failure, with staggering sums poured into its flagship universities' football programs. Embracing black music, folk art and cooking has made little dent on the deep red South that thrilled to Trump's dog whistle about restoring American (white) greatness. Old-time Dixie is his biggest base.

Navigating between the major shift in Germany and the reactionary grip of Southern myth, Neiman orchestrates telling case studies and cameos of people facing a historical memory they want to change. Learning From the Germans is a brilliant work with the added value of being highly readable.

"This book is about comparative redemption, not comparative evil," remarks Neiman. Nevertheless, she avers, "I write appalled by my country's procrastination in confronting our own national crimes."

Raised in a liberal Jewish home in Atlanta as civil rights protests swept the 1960s, Neiman is a Harvard-educated philosopher who decided to raise her children in Berlin; she directs the Einstein Forum, a notable research institute. The Jewish scholar comfortable in German society feels uneasy driving roads of the Deep South that call to mind the murders of civil rights leaders that took decades to prosecute. The South, unlike Germany, has no consensus and few monuments to slavery, much less to the long post-Reconstruction legacy of 20th-century lynching.

Contrast Berlin, which in 2004 completed a Memorial to the Murdered Jews of Europe (otherwise called the Holocaust Memorial), a 200,000-square-foot monument to historical truth and atonement.

Neiman pinpoints a 1995 exhibit by the Hamburg Institute for Social Research, on the 50th anniversary on the end of World War II, as a catalyst in working-off-the-past. Using soldiers' letters and photographs, the exhibit showed that the Wehrmacht army, not just the elite SS, was deeply complicit in Nazi war crimes. The exhibit traveled to 33 cities and drew huge media attention. As a political consensus emerged from the nation's history lesson, the groundbreaking began for the memorial in a reunited Berlin.

So drenched is American popular culture in stories of the Holocaust that readers may think it a no-brainer for Germans to acknowledge the evil wrought by Hitler. But truth is the first casualty of injustice. Turkey officially denies the mass extinction of Armenians a century ago. Spain's confrontation with Franco's fascist violence divides the society nearly half a century after his funeral.

As West Germany experienced prosperity, the government of Konrad Adenauer knew that Adolf Eichmann, architect of the Final Solution, had found refuge in Argentina by 1952. Bringing him back, Neiman writes, "was not in the German government's interest; his defense could reveal how many of his comrades were filling powerful positions in the new era." In 1960, Israeli operatives nabbed Eichmann and brought him back to Jerusalem where he was tried and executed by hanging in 1962.

By 1982, when Neiman began living in Berlin, "from West German television I learned about the Soviet invasion of Afghanistan; East German television offered news about U.S. support for right-wing militias in Central America. Listening to both, I was pretty well informed."

In her Southern travels, Neiman pays great attention to monuments and statues. History has a split personality in the Southern mind: for African Americans, a story of liberties hard won and trailing inequities, yet a consciousness rising; for the white majority, a triumphalist denial, equating the Confederacy with honor, avoiding the mammoth cruelty of slavery.

Neiman considers the National Memorial for Peace and Justice (informally known as the National Lynching Memorial), a museum in Montgomery, Alabama, a step toward restorative thinking. The museum, under auspices of the Equal Justice Institute founded by Bryan Stevenson, has 800 columns representing counties of unpunished executions, with jars of soil from each.

The soil in jars from those counties represents blood, sweat and tears, Stevenson tells Neiman. "But it still possesses the possibility of life."

[Jason Berry is the author most recently of City of a Million Dreams: A History of New Orleans at Year 300.]

A version of this story appeared in the April 17-30, 2020 print issue under the headline: Germany, Dixie and 'comparative redemption'.