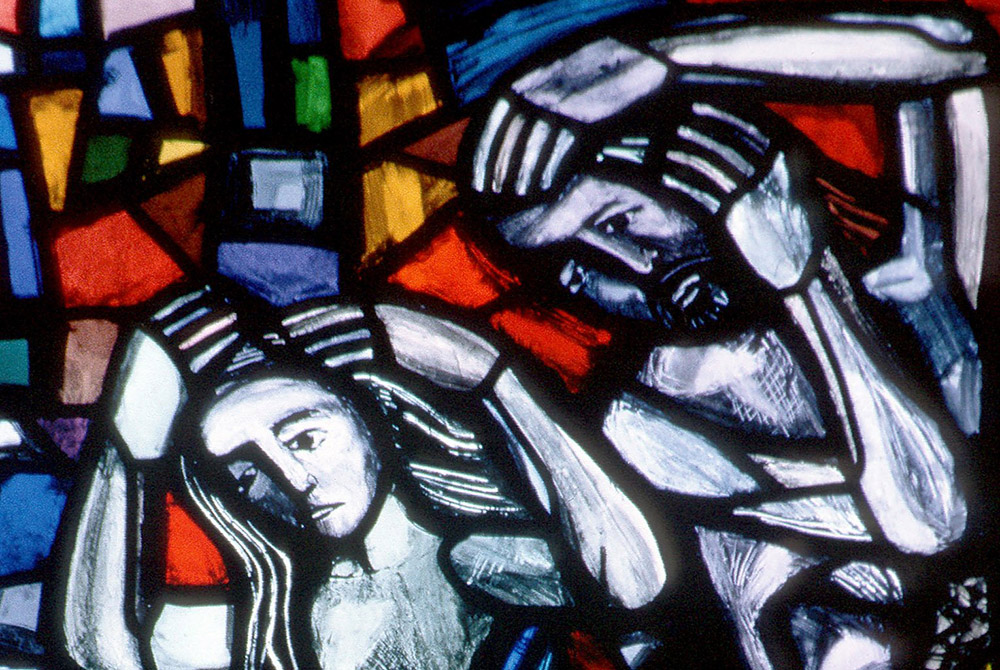 Adam and Eve are depicted in a stained-glass window at St. Nicolas Church in Feldkirch, Austria. In "The Making of Biblical Womanhood: How the Subjugation of Women Became Gospel Truth," historian Beth Allison Barr writes that "Biblical womanhood is Christian patriarchy." (CNS/Crosiers) 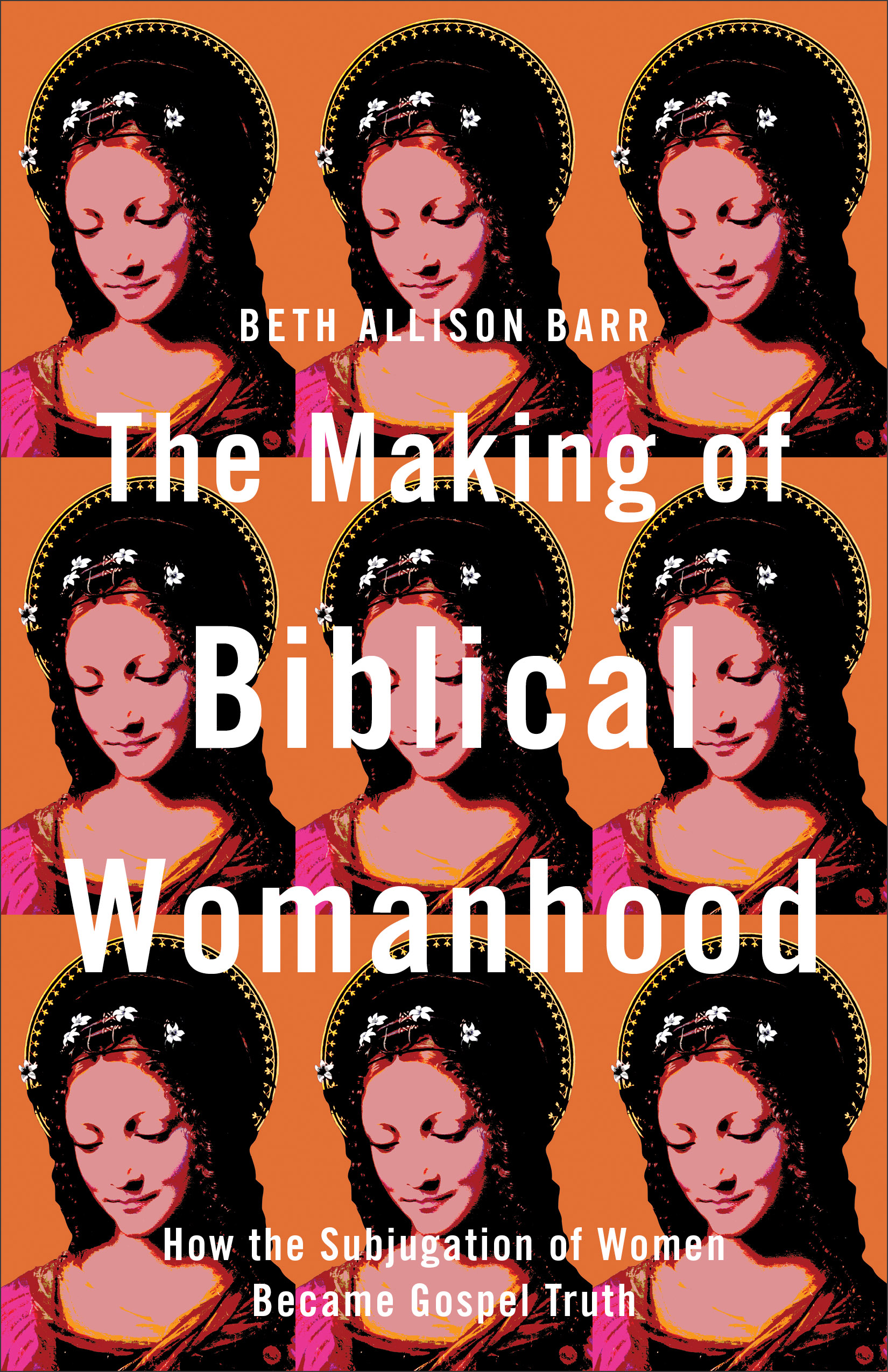 "Biblical womanhood is Christian patriarchy," writes historian Beth Allison Barr in The Making of Biblical Womanhood: How the Subjugation of Women Became Gospel Truth. The author's latest book, published in April by Brazos Press, details Barr's movement away from the theology of her conservative evangelical church.

Barr is the associate dean of graduate studies and associate professor of history at Baylor University in Waco, Texas. She earned her Ph.D. in medieval history from the University of North Carolina at Chapel Hill. The Making of Biblical Womanhood combines two genres: it is both a selective church history focused on women's subordination and a memoir that chronicles Barr's decision to support an egalitarian theology that makes room for women's leadership.

In a brief introduction, Barr shares how this book developed. Her husband had served for 14 years as a youth pastor at their church, yet in 2016 he was fired from his position because he expressed support for women in ministry. Barr shares how this incident became the catalyst for her decision to tell her story and to explain why she no longer believed in complementarianism.

Within evangelical circles, complementarianism holds that men and women are equal but distinct. As articulated by the conservative evangelical organization, The Council on Biblical Manhood and Womanhood, complementarianism supports male authority in what is regarded as a divinely ordained hierarchy with women playing a secondary and subordinate role to men. Thus, women are not allowed to serve as clergy and not permitted to teach men. Their ideal primary role is as wives and mothers. Complementarianism is contrasted with egalitarianism, which permits women to hold leadership positions. 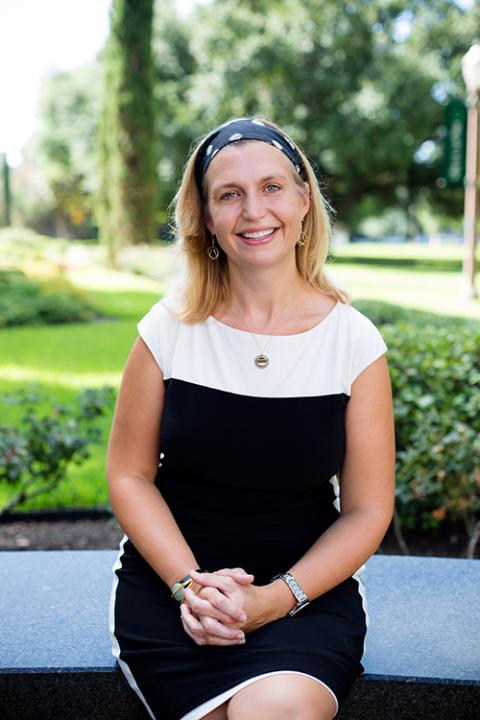 Barr contends that Christian patriarchy developed from the patriarchy of non-Christian religions. Taking the position that Christians are called to behave differently than others, she argues that Christians should be opposed to patriarchy. Next, she focuses on the New Testament Pauline epistles and highlights how texts such as 1 Corinthians 14 and Ephesians 5 have been used to support gendered hierarchy. She offers examples of other ways to interpret Paul's writings as resisting the Roman patriarchal norms of his day.

Barr also highlights the importance of women leaders in the medieval church in Chapter 3 "Our Selective Medieval Memory." She shares the work of women such as 15th century mystic Margery Kempe and discusses Christian medieval biblical interpretations that support women's preaching and teaching.

The Protestant Reformation, Barr argues, contributed to women's subordination in part due to its emphasis on the family and the authority of the husband over the wife. Barr contends that evangelicals connect to this legacy of the Reformation and stress the importance of the family and the submission of women as wives and mothers. In the 19th century, the "cult of domesticity" supported four cardinal virtues for middle- and upper-class women: piety, purity, submissiveness and domesticity. Barr connects these virtues with contemporary evangelical views on women's roles, including the belief that women should serve as caregivers and helpers in subordination to men.

Barr also discusses key texts related to women in English Bibles prior to the Reformation, including Genesis 1:27 and 1 Timothy 3:2. Also, she sketches the controversies among evangelicals regarding gender-inclusive English biblical translations. Additionally, the book focuses on the fundamentalist-modernist controversy within American Protestantism. This controversy was part of a theological conflict in the early 20th century. Fundamentalist Protestants sought to enforce traditional beliefs and understandings of the Bible, while modernists wanted the freedom to adjust to modern life. Related to this controversy is the doctrine of biblical inerrancy, which holds that the Bible is without error in its teaching. Also, Barr details the connections made between women's subordination to men and the belief in Arianism, the view of God, the Son as subordinate to God, the Father.

The author shares that she has had #MeToo or #ChurchToo experiences. Those who have survived sexual harassment and assault used these hashtags following actor Alyssa Milano's 2017 viral tweet (although activist Tarana Burke is the founder of the #MeToo movement). Barr does not detail the specifics of her encounters but connects them with complementarian theology and the ongoing oppression of women in evangelical churches. She ends by encouraging evangelicals to reject complementarianism and patriarchy and to "go, be free."

The target audience for The Making of Biblical Womanhood is Christian evangelicals.

While the specific language of "biblical womanhood" stems from evangelical circles, those seeking more in-depth treatment of women in Christianity more broadly may be surprised by the concentration on evangelicalism. Barr's focus is on women's subordination, but she does not disentangle the large category of "women" in different contexts or sufficiently acknowledge how patriarchy has affected women differently. In particular, she does not interrogate the intertwining of race and gender in American evangelicalism.

In The Making of Biblical Womanhood, the combination of historical research and personal story helps the reader to follow Barr's reasoning and to understand her pivot away from complementarianism. For Catholics, this book will probably read like inside baseball, as many of the evangelical issues raised and names mentioned will likely be unfamiliar.