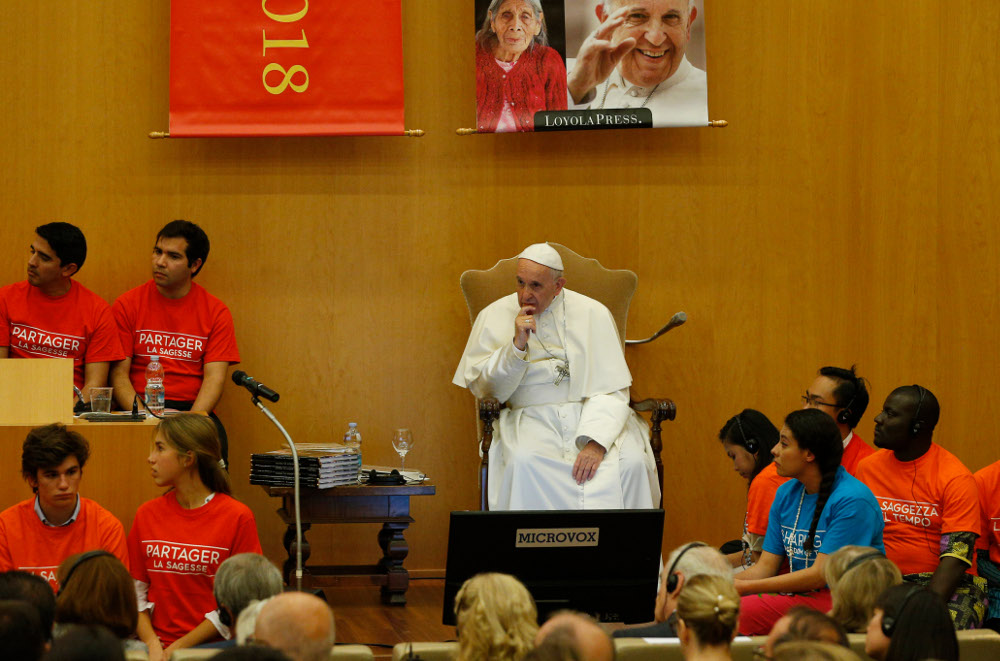 Pope Francis attends the release of the book Sharing the Wisdom of Time, Oct. 23, 2018, in Rome. (CNS/Paul Haring) 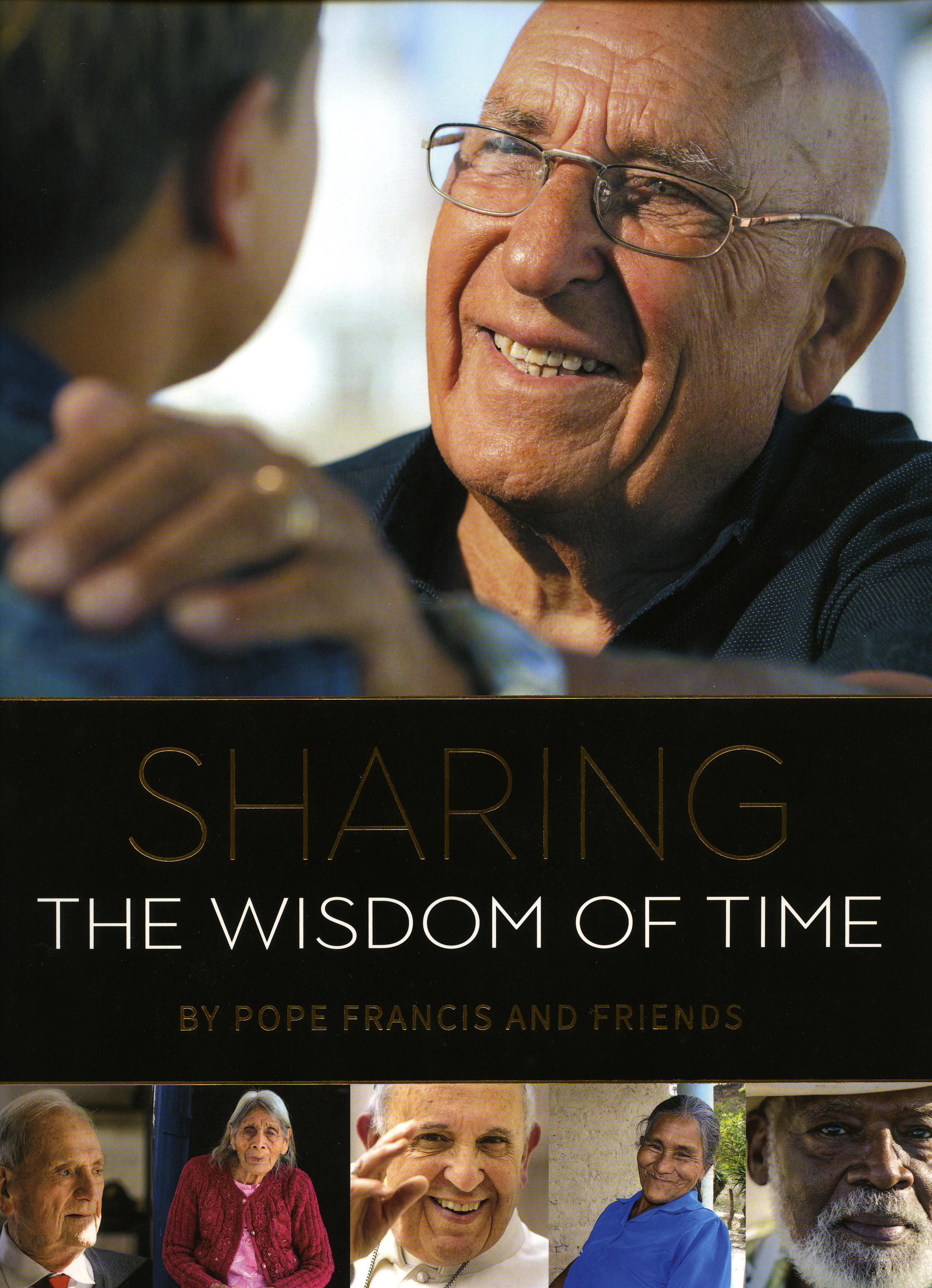 In a sense, this book began as a moment of inspiration when, during prayer, Pope Francis felt that God wanted him to say that "there should be an alliance between young and old people."

At first, the pope heeded the instruction by preaching about the need to pay attention to elders and to listen to their advice. Later, in 2016, he published Dear Pope Francis: The Pope Answers Letters from Children Around the World, hoping as an elder to connect with children.

Now in his 80s, Francis has published Sharing the Wisdom of Time, along with 250 interviewees, as well as editors and writers at Loyola Press and elsewhere — curated by Jesuit Fr. Antonio Spadaro, editor-in-chief of La Civiltà Cattolica.

Reminiscent of the bestselling 30 Lessons for Living: Tried and True Advice from the Wisest Americans — Karl Pillemer's 2011 collection of insights from those 65 and older — Sharing the Wisdom of Time promulgates words of wisdom from elders. But as one would expect, this book comes with a Roman Catholic viewpoint.

Francis responds to 31 of the book's contributors and writes the book's preface. Believing that older people are reservoirs of wisdom, he offers his own wise words as well as relatable biblical nuggets. He considers himself a grandfather to the young people in the church and calls elders "memory-keepers." He believes that old people need to reinvent themselves.

Mainly, he exhorts elders to pass on the faith to their grandchildren, an especially poignant gesture given the current scandals and upheavals in the church and the world. Who else can the pope turn to but his own generation — the elders who grew up educated and nurtured in Catholic schools and who have now become a remnant of the days of daily Mass with its Latin responses?

As Francis sees it, elders are too often ignored. The situation is unfortunate for both the young and the elderly. Separated from their families, old people are often shunted off to elder care centers, nursing homes or communities of senior citizens. Meanwhile, children are sent to child care centers and afterschool care.

All of which leaves little time for what the pope believes is necessary intergenerational communication. Older adults want to share their advice with the younger generation, who will face major decisions regarding their lives and careers. But as the pope says, today's world tends to separate people by age and offers little opportunity to bring the generations together.

What makes matters worse, as Francis writes, is the sorry condition of the world with its culture of waste, where used objects are blithely discarded, and even people — especially the elderly — are often bullied and considered unnecessary.

Francis includes little about his own personal life in Sharing the Wisdom of Time except for two notable exceptions. One involves his grandmother Rosa, who on the day of his priestly ordination wrote him a letter that he keeps tucked inside his breviary and still reads — often.

The other incident concerns Mrs. Palanconi, the midwife who helped his mother give birth to her five children. Francis was the oldest and knew when Mrs. Palanconi arrived with her suitcase that a brother or sister would soon arrive. He also says he witnessed the births of his siblings.

The editors say that all of those interviewed helped shape the book, but not all could be included. Ranging in age from their 60s to their 90s, the participants muse on the meaning of events in their lives that relate to work, struggle, love, death and hope as they share pivotal moments and the lessons learned.

Both wealthy and poor, educated and unskilled, the participants had worked as farmers, historians, teachers, recyclers, priests, pastors, chefs, nurses, writers and film directors, among other occupations. There's also a 98-year-old veteran (he died several months before this book was published), who reminiscences about his bombing runs during World War II.

Coming from numerous countries, including Kenya, Belgium, the United States, Norway, Mexico, Australia, Syria, Slovenia, Spain, India, Italy and Poland, the contributors offer short three- or four-paragraph reflections, with only a few discussions lasting two or three pages. Separating the anecdotes are large photographic portraits. Sometimes there are two portraits of the same person in a different pose. Although the photography is excellent overall, I would have liked fewer pictures and more text.

Aiming to bring the generations together, this book also presents a few warm reminiscences from young people about the elders they've encountered. Although some of the elders' reflections seem superficial, others go deeper while still others offer profundities.

One that's especially moving comes from 68-year-old Tom McGrath, one of this book's editors, who says he'll never forget his father's words spoken after a hospice nurse gave him additional pain medicine. After he awakened, looked at his family and winked, he said, "All in all, we're in pretty good shape."

Likewise, the message from this book's 90 contributors is generally positive. Here are a few:

Looking at hopefulness and persistence despite adversity, Jesuit Fr. Desmond O'Grady, a 76-year-old chaplain in an Irish mental hospital, speaks about how having Alzheimer's helps him connect with those he counsels.

The 75-year-old highly acclaimed film director Martin Scorsese offers one of the most striking reminiscences as he discusses growing up poor on the hostile streets of Manhattan's Lower East Side. One of the cruelest moments in his life happened when he was starting out and was rebuffed by the great filmmaker Elia Kazan. Later, after Scorsese had begun his career, a man — not named — who Scorsese had hoped would finance his work, told him that he saw not one thread of talent in Scorsese's endeavors.

Scorsese carried on despite rejection, eventually becoming an award-winning director in his own right, including receiving an Oscar for his efforts. Not bad for someone who had such an inauspicious beginning.

As Leah Chase, a 95-year-old former chef, puts it: "You don't stop when people criticize you. You keep going, and you do better every time."

Boyle recounts a lecture he gave about someone who was beaten to death. He describes the effect of his story on a 10-year-old boy who began sobbing loudly because, at first, he felt bad for the deceased and then he became upset because he thought he was embarrassing his mother. Boyle uses the incident to point out that the boy's mother only wanted to comfort her son, and likewise, in his view, God doesn't want anything from us. As Boyle puts it, "God only wants for us."

If there's a common theme in this thought-provoking book, it is not to worry. Everything's okay. There's an inner strength available to each of us. This strength comes from God and is also part of our human nature.

It's there for the taking.

A version of this story appeared in the Dec 28, 2018-Jan 10, 2019 print issue under the headline: Francis, friends share Wisdom of Time with youth.