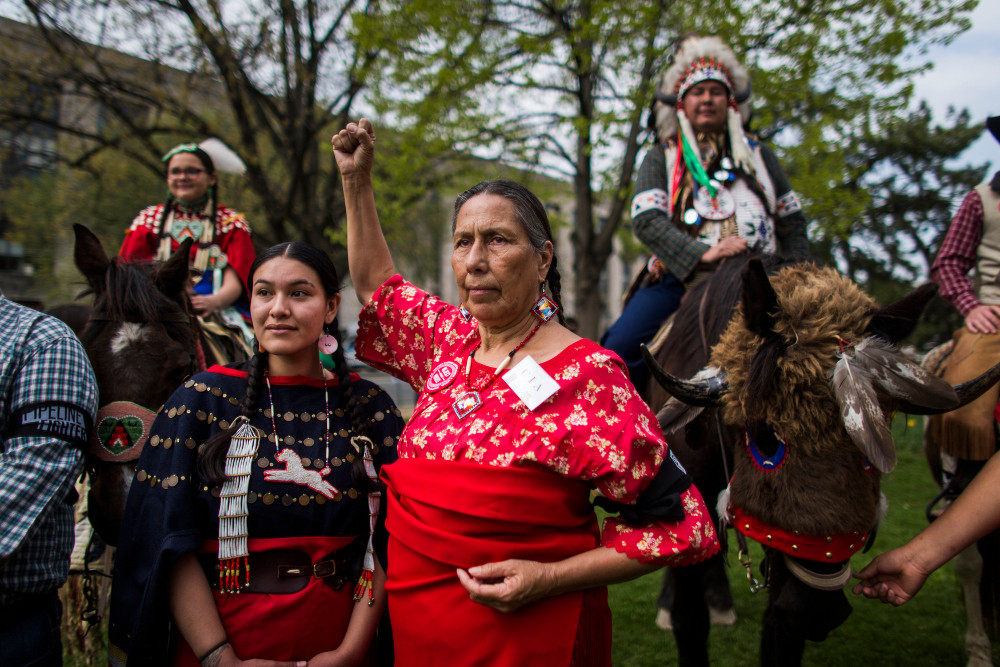 Samantha Jones of the Sicangu Lakota band of the Rosebud Sioux, left, and Casey Camp of the Ponca Nation, are seen in Washington in a 2014 file photo. (CNS/EPA/Jim Lo Scalzo)

Share on FacebookShare on TwitterEmail to a friend
THE HEARTBEAT OF WOUNDED KNEE: NATIVE AMERICA FROM 1890 TO THE PRESENT
David Treuer
528 pages; Published by Riverhead Books
$28.00

David Treuer was born in 1970, the same year Dee Brown published Bury My Heart at Wounded Knee, a chronicle of Indians in the American West that claimed that the "culture and civilization of the American Indian was destroyed." Treuer vividly remembers his dismay upon reading Brown's rehearsal and revival of the myth of the "dead Indian," a myth Treuer, an Ojibwe who was born and raised on the Leech Lake Reservation in northern Minnesota, knew to be false.

"All I had was the small hot point of hope that I mattered," he writes of that moment, "that where I was from mattered, and that someday I would be able to explain — to myself and to others — why." In his comprehensive and important new work, The Heartbeat of Wounded Knee, Treuer has done just that.

Treuer argues that to fully know America, all of us, Native and non-Native, need to look at and understand the Indian past and present. (He uses the words Indian, indigenous, Native American and American Indian interchangeably.) "It has always bothered me," Treuer writes at the close of his book, "that the very idea of paying attention to or knowing Indian history is tinged with the soft compassion of the do-gooder, as a kind of voluntary public service, like volunteering at an after-school program." But if we don't understand Indian history as part and parcel of everybody's history, then we miss "the full measure of the country itself."

Though the book's subtitle is Native America from 1890 to the Present, Treuer includes 80 pages of history from before that date, which refers to the massacre of 150 Lakota at Wounded Knee in South Dakota, and the end of the so-called "Indian wars." Thanks to archeological digs, we now know that human habitation of the Americas likely stretches back at least 19,000 years. The oral history of most American Indian peoples, Treuer explains, has always affirmed that they are indigenous to this continent; archeological evidence now more closely matches this understanding.

Though Treuer separately narrates, in whirlwind fashion, the traumatic history of colonization in each region of the country, painful themes echo throughout each: "disease, slavery, starvation, and disruption." In the Northeast, what is now known as New England, disease brought by European traders killed roughly 90 percent of the Native populace between 1616 and 1619. Out west, the U.S. military responded to indigenous resistance of colonial assault by the deliberate destruction of crops and the slaughter of stunning numbers of animals in order to force nations to accept the dependency of reservation life. Treuer quotes the first governor of California, Peter Burnett, when speaking of the state's policy toward Indians: "a war of extermination will continue to be waged … until the Indian race becomes extinct." By 1890, when Dee Brown's narrative ends, the American Indian population had plunged from a pre-contact estimated population of 20 million to fewer than 200,000.

Treuer labels the decades after 1890, the era of boarding schools and allotment, as "Purgatory," when the genocidal policy of the federal government shifted from overt violence to cultural destruction through assimilation. "As bad as the years of warfare and treaty making had been," he writes, "assimilation would be immeasurably worse."

Beginning in 1879, Native children were forcibly removed from their homes and sent away to schools, many of them run by churches. Their hair was cut, they were stripped of traditional clothing, barred from speaking their native tongue and frequently suffered abuse. Native communities today continue to feel the shattering impacts of boarding schools as they deal with intergenerational trauma and work to reclaim their culture.

In 1888, referring to the recently passed Dawes Act that broke up communally owned reservation land in order to assign individual allotments to native families, the commissioner of Indian affairs wrote that the Indian "must be imbued with the exalting egotism of American civilization so that he will say 'I' instead of 'We,' and 'This is mine' instead of 'This is ours.' " As the allotments did not account for all reservation land, anything left was sold to white settlers, and the money used to support the new boarding school program. "It is impossible not to feel a kind of sickness," writes Treuer, "at the thought that the government stole Indian land in order to fund the theft of Indian children."

By the close of the First World War, for the first time in a century, Native population births outstripped deaths. In 1924, Native Americans were finally granted U.S. citizenship (though several states still denied Indians suffrage). Still, progress was slow: by the Second World War, the average Indian could expect to earn only half of what a white worker made.

By 1970, thanks to relocation policies that encouraged Native communities to leave their reservations for cities, half of all Indians lived in urban areas. This created opportunities for different tribal communities to interact on an unprecedented level. "Red Power" activism spread, and in the fall of 1969, a group of native activists took over Alcatraz Island. The year-and-a-half-long protest impacted the Nixon administration, which decided to end the catastrophic 1953 policy of termination, which had made "Indians — legally, culturally, and economically — no longer Indians at all." 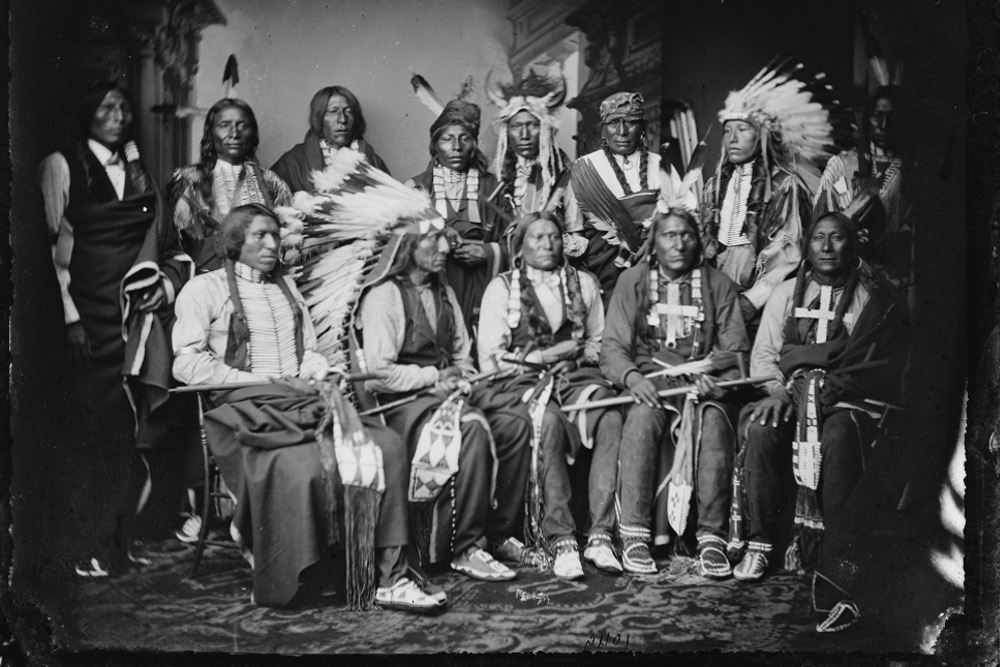 The importance of Treuer's writing can be found in his articulation of the Indian present. This is where Treuer's counter narrative to Dee Brown's is at its most engaging and hopeful. Woven throughout his account are personal stories and interviews of people he knows or had met over the nearly four years he spent on the road creating this chronicle. People who are modern and Indian, simultaneously.

The most memorable character in the book may be Bobby Matthews, who makes his living solely off the land, gathering what he can to sell for money. "Welcome to my office!" Matthews tells Treuer as they walk into the woods in search of white spruce cones.

There's Sean Sherman, who makes his living by cooking all pre-colonial foods gathered from places like Wozupi Tribal Gardens near Minneapolis. And Sarah Agaton Howes, an Ojibwe mother who inspires other Native women to engage in running and other modes of healthy living. (Obesity and diabetes rates are high in Native communities.)

Of course, there is Standing Rock, the largest gathering of American Indians since 1876, who stood up in 2016 to protect the water against the Dakota Access Pipeline. Though unsuccessful (President Donald Trump quickly wrote an executive order to allow access for the pipeline), Treuer recognizes that the convergence woke up other Native groups to the realities of pipelines within their own communities.

Near his narrative's end, Treuer writes, "We are not only 'still here' — we are here and working to undo the violence of the ages." In the 2018 election, more than 80 Indians ran for public office. Several won.

For too long, Native history has been written by white historians. Treuer offers a view of Native America from a Native American. He has done a great service in sifting through a painful history to offer up an ultimately hopeful story. For anyone living in the United States, this book is vital reading.

[Eric Anglada is co-founder of St. Isidore Catholic Worker Farm and works for the Sinsinawa Dominicans, both in southwest Wisconsin.]

A version of this story appeared in the April 19-May 2, 2019 print issue under the headline: The Native America of today.