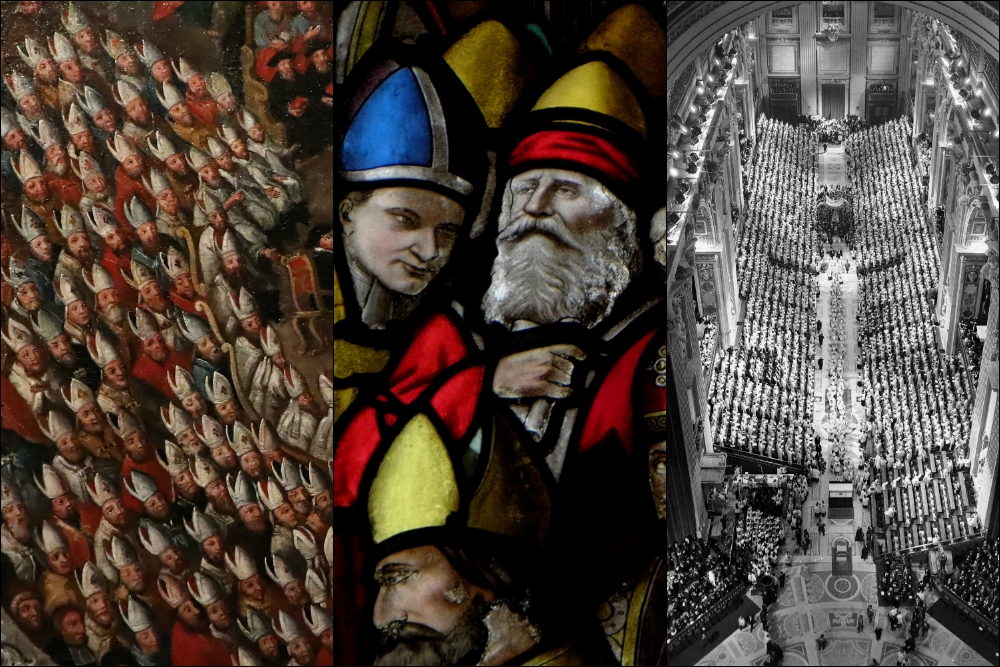 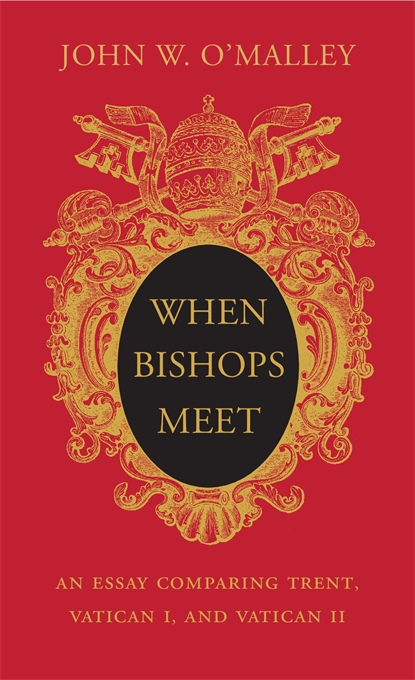 Anyone familiar with church history will know that Jesuit Fr. John W. O'Malley is one of the greatest Catholic Church historians of the last century. Currently University Professor in the Theology Department of Georgetown University, he holds a doctorate in history from Harvard University. His specialty is the religious culture of early modern Europe. Probably his best-known work is The First Jesuits, which was published by Harvard University Press in 1993 and has been translated into 12 languages.

With such outstanding academic credentials, it was with great enthusiasm that I picked up When Bishops Meet: An Essay Comparing Trent, Vatican I, and Vatican II. I was not disappointed.

Countless books, of course, have been written about the three great post-Reformation councils of the Roman Catholic Church:

O'Malley has written detailed monographs on each of these councils (Trent: What Happened at the Council; Trent and All That: Renaming Catholicism in the Early Modern Era; Vatican I: The Council and the Making of the Ultramontane Church; and What Happened at Vatican II). Yet, according to O'Malley, his latest work is unique because no one has written a book comparing and contrasting the three councils and exploring the relationship among them. O'Malley proposes to study the three councils synchronically rather than diachronically, or side by side rather than historically, from the earliest to the most recent.

The book is valuable and a worthwhile read for people of very different backgrounds. For those who know little in detail about the three councils, they will learn a considerable amount; for others who are already knowledgeable in modern conciliar ecclesiology, they will be surprised at the new insights they discover through O'Malley's depth of presentation and subtlety of interpretation.

If there is one sentence that summarizes what O'Malley sees as central to the radical shift in understanding on the part of the bishops at Vatican II from the earlier two modern councils, it is this: "Tradition is not inert but dynamic."

As he says, "What is special about Vatican II in relationship to the two previous councils is, therefore, that it made its decisions with full awareness of the reality of change and full awareness that that reality affected the church in all of the aspects. For a council to act with such awareness of change is itself a significant change."

And he makes this final point on change: "If such change achieved its goal, it entailed a process of redefinition that was both continuous and discontinuous with the past."

A significant aspect of O'Malley's book is his noteworthy historical detail in presenting each of the three councils, while not sacrificing a broader vision and a historical overview that is essential to the nature of the work. In the first part of the book, O'Malley address three vital questions: What do councils do? Does church teaching change? Who is in charge?

In Part 2, he examines the participants at councils: popes and the Curia, theologians, laity and an unusual group he calls the Other. The Other could include people like civil rulers, such as kings and princes. But far more important, the Other was the historical context and the world in which the councils occurred.

For Trent, of course, it was the reality of Protestantism; at Vatican I, the Other was classical liberalism, including "rationalism, atheism, democracy, disrespect for authority, disdain for tradition, contempt for religion, and the radical secularization of the society," the litany of mistakes described so vividly by Pope Pius IX in his Syllabus of Errors in 1864.

At Vatican II, the Other included representatives from other Christian traditions, even other world religions. But the overwhelmingly important Other was the contemporary world itself, and all that the world had become as a result of two World Wars, the quantum leap in science and technology, and the final separation of religion and culture, so that a truly secular culture controlled daily life.

In the concluding section, O'Malley asks two crucial questions: What difference did the councils make, and will there be another one?

The answer to the latter question, as tradition tells us, is resoundingly yes. While Trent was "quintessentially bishop-centered," and Vatican I "pope-centered," Vatican II was a council for the emerging new world church, the goal of which was "to explore in depth the church's identity, to recall and make operative its deepest values, and to proclaim to the world its sublime vision for humanity."

When Bishops Meet is a must-read for the church historian, the theologian or anyone interested in continuity and discontinuity in the historical tradition of the church. The book is a lens into seeing the church as both a mystery of grace and a community of sinners. When I teach a course on ecclesiology again, O'Malley's latest contribution to church history will be at the top of my reading list.

[Frederick J. Parrella is professor of theology and religious studies at Santa Clara University. He is the editor, with Raymond F. Bulman, of From Trent to Vatican II: Historical and Theological Investigations.]

A version of this story appeared in the Nov 1-14, 2019 print issue under the headline: O'Malley finds new insight putting three church councils side by side.