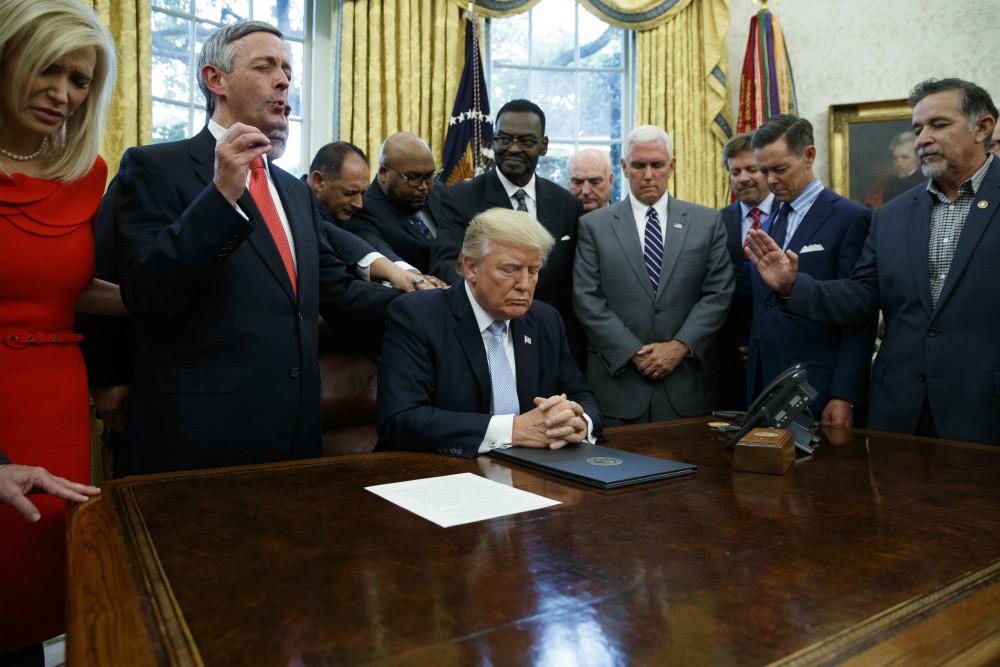 On Sept. 1, 2017, religious leaders pray with President Donald Trump in the Oval Office of the White House in Washington after he signed a proclamation for a National Day of Prayer to occur on Sunday, Sept. 3, 2017. (AP Photo/Evan Vucci) 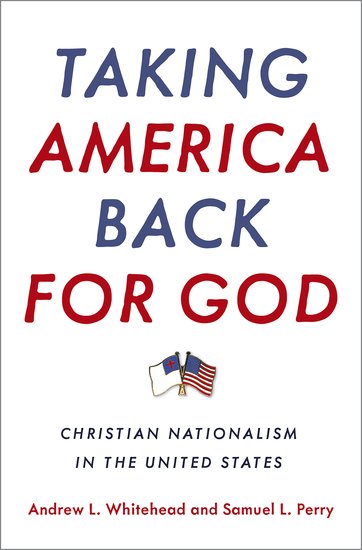 In the early stages of the coronavirus pandemic, Donald Trump, relying on the successful rhetoric of his 2016 campaign and his ensuing presidency, shifted attention away from any narrative that would portray him as not winning. As the spreading virus betrayed his lack of preparedness, he deflected blame onto non-Americans, be they the Chinese or the president from whom he tried to deprive citizenship, Barack Obama. He excepted the English-speaking countries Great Britain and Ireland from his initial travel ban because they have "great borders," until he had to face the fact that the virus doesn't share his respect for boundaries.

When called out by the media on his slow response to a pandemic that he at first minimized as if it were nothing more than a bad cold, Trump condemned reporters as "bad," and blessed reporters from conservative media who fed him opportunities to brag and gloat.

As many Americans unhealthily buried their heads in their hands in disgust and despair at Trump's misinformed, propagandistic press briefings, nearly half of all Americans still trusted in him, even as he spouted obvious misinformation. Not a few self-professed religionist Trump supporters stood firm in their belief that this louche, unreligious TV star descended on a golden escalator to return American to a utopia when everyone was white, women served their husbands, and the Bible dictated morality and political decisions.

For them, returning America to greatness meant asserting "Christianity" and "Christian values" as the guiding principles of American life, rescuing them from the continual assault of modernity. Because Trump had championed policies valued by those who clothed their preferences in religious piety, he earned undying support, regardless of his well-known adulteries and malfeasance.

One of the key points in Andrew L. Whitehead and Samuel L. Perry's Taking America Back for God: Christian Nationalism in the United States is that the ideological framework of Trump's base, Christian nationalism, bears little resemblance to Christianity. Christian nationalism, argue the authors, works in a decidedly un-Christ-like manner by supporting policies that marginalize those who, through their beliefs or identity, don't conform to a biblically ordained order that reverences the traditional family, militarism, closed borders, and white, Protestant supremacy.

For the Christian nationalists, keeping refugees on the other side of a wall takes precedence over caring, feeding and seeking social justice for migrants, acts of love that many would associate with Christianity. Indeed, argue the authors, Christian nationalism is a "hollow and deceptive philosophy that depends on human tradition and the basic principles of this world, rather than on Christ."

By playing the role of an oppressed minority, Christian nationalism adds moral strength to its position while hiding the truth that its ideology is aging out and driving young people away through its intolerance.

In other words, Christian nationalism is a political power broker masquerading as a religion. And the power wielded by the adherents of this movement is great. The authors find that no other factor better predicts a vote for Trump then adherence to the Christian nationalist ideology.

Wright and Perry, both sociologists of religion, draw their conclusions from survey data, testimonial evidence and direct observation at events like the conservative Baptist church-sponsored "God and Country Celebration" to define Christian nationalism, identify its level of adherence among American citizens, and to outline how Christian nationalist ideology affects public policy and elects presidents.

Their research finds that Americans, on the basis of their adherence to the values that characterize Christian nationalism, can be classified as "Ambassadors," "Accommodators," "Resisters" and "Rejecters."

Ambassadors, those who most fervently embrace those positions that characterize Christian nationalism — that America is a Christian nation that risks divine sanction for violating the tenets of social conservatism — are about equal in number to Rejecters, each at about 20%. The two middle-ground positions — Accommodators and Resisters — compose the majority of Americans, however with more identifying as Accommodators.

Nor does strong adherence to the Christian nationalist agenda correlate with one's level of religiosity. In fact, the data show that people with high levels of religiosity (evidenced by the level of prayer and attendance at worship services, among other factors) are less likely to support stronger immigration controls or discriminate on the basis of race or ethnicity.

Still, Christian nationalism resonates with many Americans, as it taps into fears and uncertainties that the global pandemic has only exacerbated. Looking ahead to November, Whitehead and Perry argue that, if Democrats wish to loosen the grip of Christian nationalism and disempower its greatest and most cynical Ambassador, they must understand the role that religion plays in both private consciences and the political views of most Americans. The authors suggest that, to reclaim American dignity, we first must reclaim Christianity from those who have distorted and exploited it.

[Dennis McDaniel is associate professor and chair of the English Department at St. Vincent College.]

A version of this story appeared in the Aug 21-Sept 3, 2020 print issue under the headline: US Christian nationalism.