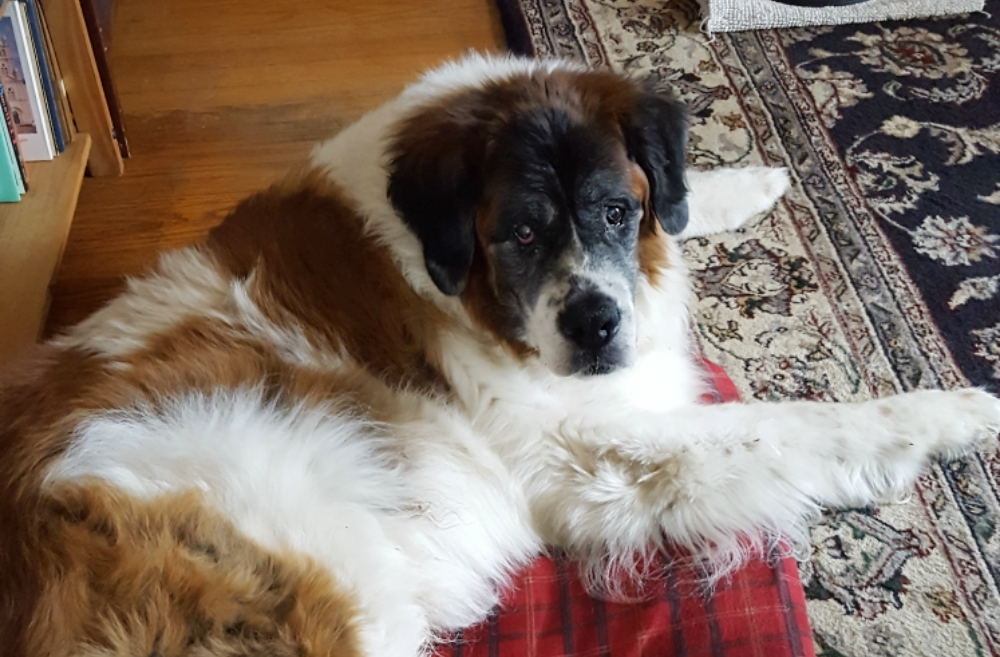 Last week, the nicest member of my family died. Ambrose, my beloved St. Bernard, would have been 12 this autumn, a remarkably long life for a St. Bernard. Their typical life expectancy is eight to 10 years. I want to think he hung around so long because he wanted to be with his daddy, but I suspect the salmon jerky treats had something to do with it also.

It wasn't just the salmon jerky. Dogs lack guile but they do not lack an appetite. When Clementine, my border collie, had to go through chemotherapy, the only way to get her to eat was to include pot roast in her breakfast and pork tenderloin in her dinner. Of course, I could not give them to her and not give any to him. When she died, Ambrose insisted we keep that menu. He always approached his meals as if he had not eaten in weeks. After his meals, he would almost jog back into the study he was so happy.

On Sundays after Mass, I always make an omelet and he stood at the table, waiting to split each piece of bacon, doing his part to help his daddy keep down the cholesterol. When I ordered a pizza, he would do likewise waiting for the crusts. I think he loved me as much as he loved the food, but I will never know for sure.

In 2013, I wrote an article for NCR's special section on Spirituality, and I wrote about the spirituality of dogs. I began that article by recalling a recent visit to the vet with Ambrose:

There was little traffic and we arrived early. While we were waiting to be seen, a woman came in to retrieve some medicine for her pet. She took one look at Ambrose and put her face down to his, letting him lick her with his very large tongue. She rubbed his ears. She kept saying, "You are so beautiful." This went on for several minutes.

Then, the woman stood up and turned to me. "My husband told me last week he wanted a divorce, and I have just come from my first meeting with the divorce lawyer," she said. "I can't tell you how much I needed this time with your dog." Then she left.

I sat there, dumbfounded. I began to wonder: Could a human being have had the same effect on this woman that Ambrose did? What is it about dogs, and especially big, sweet dogs like Ambrose, that evoke something very profound in the human heart, something that touches the ineffable, something to do with grace?

Ambrose was a great grace to many people. He was ridiculously sweet and always gregarious. When I lived in Washington, and walked him several times a day, the neighbors would always come over to pat him, especially the children. They called him "Big Head." 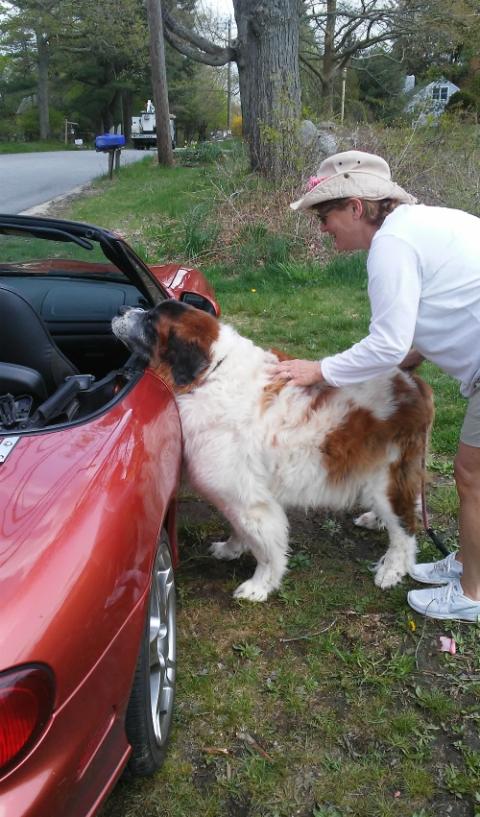 Ambrose considers how he will get into a convertible. (Provided photo)

When I first moved back to Connecticut two years ago, I would walk him down to the Congregational church and back each morning. The old-timers in town knew me as "Claire and Felix's son," but the newcomers came to know me as "Ambrose's dad." Both are fine ways to be known, better than I deserve.

No one received more blessings from Ambrose than me. When my black lab Bernie died and when Clementine died, hugging Ambrose was how I got through those losses. When I moved back, the house was in worse shape than I had realized and it has taken me some time to get the guest bathroom and bedrooms ready to receive company. I think he knew that he needed to hang on so his daddy would not go stir crazy all alone in this big old farmhouse in the country.

It is natural to bond with dogs, and that bond only grew stronger as we navigated Ambrose's health issues. When he tore his crucial ligament and had major surgery, he had to be kept perfectly quiet and heavily sedated for the first two weeks. It took two of us to get him down the stairs so he could do his duty. Then, he could walk no more than five minutes the first few days, six the next few, and so on.

It was a long, slow recovery and by the end of it, I could hear him stir from the next room and one glance could tell me if he was in any way anxious. The past six years, when he went outside, it was always on a leash lest the crucial ligament in the other leg tear.

As he grew blind in these last few months, walking him was a challenge at night, but we managed to keep him from running into trees. He would occasionally need help standing up, and knew precisely the look that told me across the room to get over and help him lift his back end.

His first bout of laryngeal paralysis occurred last autumn and the vet said that heat would make it worse so we kept the house at a toasty 62 degrees all winter long. He took his many medications like a trooper: no need for pill pockets, just open that big mouth and throw them down.

Through it all, Ambrose never lost his playfulness until the last hour and a half of his life, when the final attack of laryngeal paralysis robbed him of his usually jaunty personality. The "Ambrose Song," sung to the tune "On Top of Old Smokey," captured some of that personality:

Oh, beautiful Ambrose,
You take half the bed,
You think you're a toddler,
We call you "Big Head."

He liked it when I sang him his song. He liked being a toddler, even as his arthritis told him it was not the case.

Ambrose, like all my dogs, was a rescue, meaning he came from a shelter because someone did not want him. I would look at his handsome face and wonder who would not want this wonderful beast?

In this vale of tears, dogs bring more than companionship. They bring love, the unconditional love of a kind we humans are not capable and that we associate with the divine. The central dogmatic claim of our Catholic faith is that God revealed his unconditional love in the passion, death and resurrection of his Son, Jesus Christ. If we humans seek such love in one another, from our parents or our siblings or our spouses or our children or our friends, we will meet with disappointment, not entirely of course, but disappointment nonetheless. We humans have our agendas and our egos and our grudges and our betrayals. We come with conditions.

It may be different for the saints and for the mystics, but for the rest of us, the closest we get to an experience of that unconditional love disclosed in the Gospels on this side of the abyss comes from our dogs. Ambrose was an evangelist. He was my evangelist. And that made me the most blest of men.