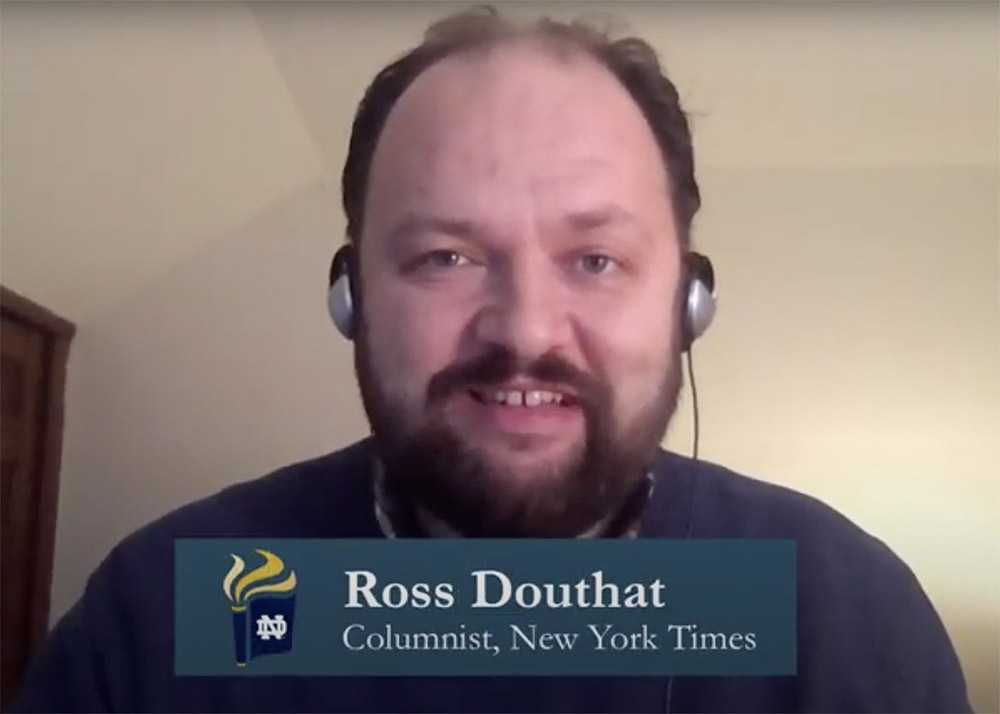 Author and New York Times columnist Ross Douthat is seen in a screenshot of a Jan. 14 panel about "Recovering Our Institutions" during a virtual conference focused on unity and the common good hosted at the University of Notre Dame. (CNS screenshot)

Whenever The New York Times columnist Ross Douthat takes to the pages of a conservative Catholic journal like First Things, you know the result will be off the mark. There will be erudite comments and the occasional thought-provoking observation, but his writing about Catholicism is akin to someone who studies the spider's web in all its intricacies but forgets the spider!

So it was when he published "Catholic Ideas and Catholic Realities" last week. He posits that the post-conciliar Catholic Church in the United States had a liberal Democratic Party wing and a conservative Republican Party wing, but both wings represented "an American Catholicism fully reconciled to liberal democracy." And while those two essential camps still exist, he argues that "among younger Catholics, in the intelligentsia especially, both syntheses have come under severe strain."

Douthat proceeds to sketch what he deems "a tentative taxonomy" of the new, emerging expressions of Catholic thought. He seems unable or unwilling to recognize and name the principal difficulty of each position.

The "populists," in his reading, view former President Donald Trump's changes to the conservative movement as "a welcome corrective to the libertarian errors they associate with figures such as Paul Ryan."

The populists "generally favor immigration restrictions to protect domestic workers and rebuild social solidarity," as if racist nativism played no part in their calculation. And they see their populism as a leavening within the liberal tradition, shoring it up with religious groundings. Their politics may differ from that of Richard John Neuhaus, but they operate with the same points of reference. Douthat fails to acknowledge that association with Trump brings nothing but grief.

The "integralists," on the other hand, hold that "liberalism is beyond correction because it was rotten from the start."

According to Douthat, the integralists "ultimately believe in Catholic empire, not Catholic nationalism, and they regard some of the leftward elements of Pope Francis's magisterium as implicitly integralist — particularly the ecological encyclical Laudato Si', whose admonitions and prescriptions do not feature prominently in populist politics at the moment."

Douthat fails to note that in their commitment to "Catholic empire" they place themselves in direct opposition with the authoritative teachings of the Second Vatican Council.

The so-called "benedictines" are those who follow Rod Dreher's commitment to a "smaller, purer" church that removes itself from the ambient culture so as to preserve and protect a distinctly Catholic culture.

They view "internal renewal as a precondition for any new form of Christian politics," a teaching that finds warrant in Vatican II, but they come up short on the church history scale: The way of the church has never been to remove itself from the culture. St. Benedict did not create a monastery in order to preserve a Christian culture; he built his monastery so that he and his friends could live holy lives. Douthat fails to see this, no doubt, because his categories are always derived from politics and social science.

Finally, there are the "tradinistas," a movement that grows out of the Catholic Worker and "a belief that late capitalism more than late liberalism is fundamentally incompatible with Christian faith, and that the recent revival of socialism can be adapted and deployed by Catholic social thought." They are less interested in the secular left's sexual politics, Douthat insists, though not to the degree that some conservative Catholics would want. He fails to acknowledge that this group, alone among the four, correctly sees materialism, the lived dominance of consumer culture, as the thing that suffocates religion.

So much for the "Catholic ideas." The second half of Douthat's essay is consumed with "Catholic realities," by which he means demography and, specifically, "widespread institutional collapse." He collects a raft of depressing statistics, all of which point to the uncontestable fact that the structures of the ethnic Catholic Church of the mid-20th century have lived beyond their expiration date and no longer serve to pass on the faith to the next generation.

Douthat concedes that the four groups he surveys are limited to intellectual circles, that "allowing for a few sympathetic Republican politicians in the orbit of the populists, these tendencies belong, for now, to the intelligentsia and the intelligentsia alone. They are all especially distant — as is much Catholic punditry — from the American Church's burgeoning Hispanic population and disaffected white working class."

The concession is insufficient. The problem is not simply that these four iterations of Catholic identity exist in an intellectual ether. It is that with the exception of some "tradinistas," these groups are using religion to bolster their politics, not the other way round — or at least to bolster their Twitter profile. We should all be glad, even proud, that most Americans assume a Catholic's intellect and politics are related to their membership in the church in a way people do not often assume about a Presbyterian or a Methodist.

But the integralists, for example, are using arcane 19th-century ideas associated with the papacy at its most ultramontane to aid their political critiques and ambitions, which is not the same as engaging one's faith (and its intellectual and moral tradition) here and now to determine how that faith can and should shape one's politics.

Any time a person removes a body of ideas from their cultural setting and applies them to their own, very different situation, they should exercise great care. My fear is that the integralists are a conservative Catholic version of the 1970s Hollywood actors who, having seen a television show about Buddhism, announced they were now Buddhists.

Intercultural dialogue is fascinating and the study of history is essential to any education. But that dialogue and that study should counsel intellectual humility first and foremost, an attentiveness to difference and complexity. Instead, ideas are ripped from their context, turned into intellectual Silly Putty, and molded any which way.

There is a deeper problem with Douthat's approach. He acknowledges that "public policy, political order, partisan commitment and ideological rearrangement" have been the primary focus of these groups, and that:

much more ink needs to be spilled on, and much more thought and effort given to, the internal questions facing American Catholicism — questions of how parishes, schools, and dioceses can transition to the likely realities of 2040, how renewal can be achieved within weakening structures, how contemplative and active forms of Catholic life can be revived, how the five thousand can be fed when the supply of loaves and fishes seems to be in steep decline.

How to feed the five thousand is a question of grace, not demography, and grace makes virtually no appearance in his little essay.

The "supply of loaves and fishes" is not in "steep decline." The supply of loaves and fishes are the cries of unredeemed humanity, searching for a Savior whose flesh is real food, and whose blood is the cup of a new and everlasting covenant. The intellectuals on Twitter may be too busy to notice — although I think the tradinistas are the real deal — but there is human need all around.

The struggles for the church today are not primarily between ideas of left and right. The struggles now as ever are to comfort those who mourn, to be present to those who are ill and dying, to feed the hungry and clothe the naked, to proclaim liberty to captives and a year of favor from the Lord.

Douthat, in passing, writes: "Of course, the Holy Spirit may have other plans for the Church." Indeed.

A version of this story appeared in the Aug 6-19, 2021 print issue under the headline: Church's struggles are not just left vs. right.