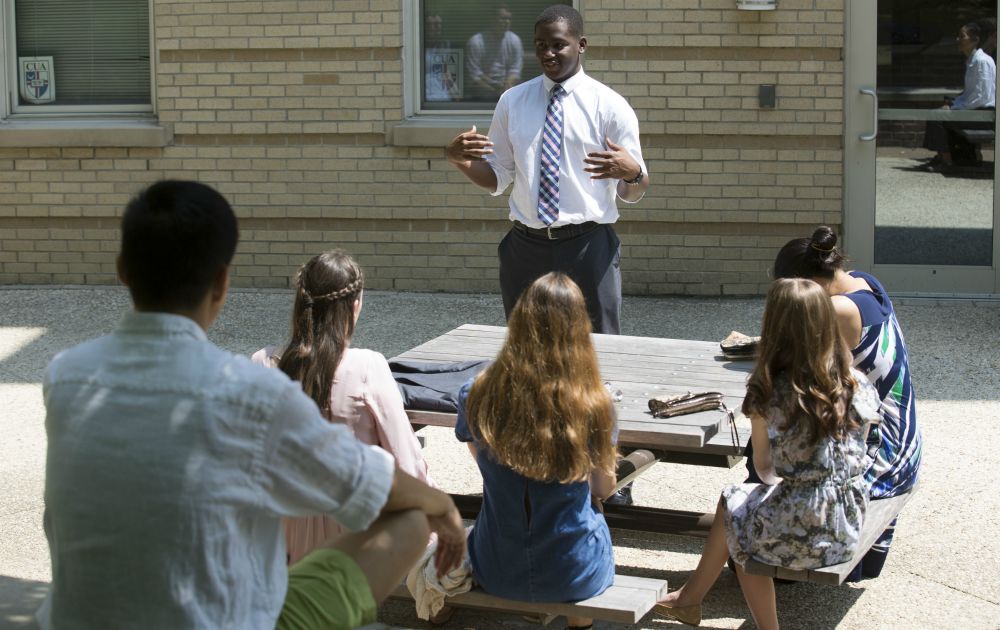 Catholic University of America student Isaiah Burroughs leads a discussion on the Washington campus with members of the Rite of Christian Initiation of Adults group he helped guide. (CNS/Chaz Muth)

There are very few things in this life more gratifying to a columnist than to pen a sentence that ignites a controversy.

When I linked to a video of a debate between Austen Ivereigh of Catholic Voices and Matthew Schmitz of First Things, I had no intention of starting a controversy.

In that video, Mr. Schmitz accuses Pope Francis of "building his program of supposed reform at the expense not only of the church but also at the expense of its most vulnerable members, children who have been orphaned by the culture of divorce and remarriage that was left to us by the 1960s and the baby boomers."

In America, the divorce rate began to tick up in the 1950s, but never mind. When he said this papacy represents "a revenge of the past," I threw up my hands. Like Ivereigh, I find Schmitz's claims "ridiculous." And so, in linking to the video I voiced the additional complaint that I am tired of converts (Schmitz, Rusty Reno, Ross Douthat, among others) standing in judgment of the pope of the church they have just joined. In fact, my actual sentence was: "I am so tired of converts telling us that the pope is not Catholic."

Then all hell broke out on the Twitterverse. I was accused of attacking converts per se, when anyone can discern by the context of my remark that I was writing only about converts who denounce the pope. Mr. Schmitz complained he did not actually say "the pope was not Catholic," but he said the pope indulged the antinomian heresy, and, as I am sure he learned in convert class, heresy places one outside the church. He also is the literary editor of a magazine that recently published an article that began: " 'Is the pope Catholic?' used to be an answer, not a question."

The controversy has now produced two thoughtful commentaries to which I should like to call attention. At Commonweal, Massimo Faggioli brings his acute theologian's eye to the differences between cradle Catholics he has met here in the U.S. and converts. He also looks at how the current crop of converts, since Vatican II, enter the church at a time of "crisis of Catholic ecclesiology" and how their entry touches on ways all Catholics understand differences between the pre-Vatican II era and the post-Vatican era. It is, like all of Faggioli's contributions, incisive and of more substantial theological depth than I can bring to this or any subject. A tip of the biretta to him.

Austen Ivereigh, who endured Schmitz's rude interruptions in the interview, wrote at Crux:

Winters wasn't being sniffy about converts either, but simply pointing out the — let's just call it, for the time being, incongruity — of those who join the Catholic Church in a blaze of Damascene fervor later announcing noisily, after a new pope is elected, that the pope is not doing what they believe popes should do.

Incongruity. It is a morally neutral word, which is both its advantage and its weakness.

Apparently, Ivereigh's column struck a nerve and he has since issued an apology, as has the editor at Crux. To be clear, like the controversy surrounding the Civiltà article about conservative Catholics and evangelicals, this controversy about converts criticizing the pope is not, repeat not, the result of something being written that was wrong or hurtful. Spadaro and Figueroa, myself, Faggioli and Ivereigh struck a nerve. That is why there has been controversy.

When I said I was tired of converts attacking the pope as insufficient, I meant what I said and to register a moral complaint. These attacks are tiresome the way a dinner guest is tiresome who complains that the soup is not hot enough, the pasta is not spicy enough, the steak is overcooked, and that I neglected to purchase their favorite cheese for the cheese course. Just as those complaints minimize the work that goes into a dinner, so too do the complaints against Francis minimize, to my mind, the work that goes in to conversion, work on the part of converts and work on the part of those of us who have volunteered for the initiation rite classes over the years. You see, conversion doesn't stop when you join the Catholic Church. In important ways, we are all constantly converting to an ever more faithful clinging to Christ. It is this fact that counsels us to humility, a humility that has been lacking in these criticisms of Pope Francis from people who are still newcomers.

I always tell a Rite of Christian Initiation of Adults (RCIA) class: You think we are the ones helping you — and it does take work to prepare lectures, meet weekly as a group and another time individually with the candidate or catechumen you are sponsoring, to go to the retreats, to answer their questions, to accompany them and their loved ones in this year-long process. But, in truth, it is the candidates and the catechumens who help us. They renew our faith. The dynamic is akin to that I mentioned last week in reviewing Fr. Lou Cameli's book in which he said that we must not only evangelize but must be evangelized; the two are concurrent, not consecutive. And, indeed, the people who go through RCIA invariably have become the most active members of our parish.

This should not surprise. The dynamic first generations of Christians were all converts. Very few cradle Catholics in the history of the church have effected as much influence over Catholic theology as did the convert Augustine. The church in the United States has no greater source of pride than her daughter, the convert, Dorothy Day. And all of us involved in the intellectual apostolate, especially in the English-speaking world, undertake our work in the happy and luminous shadow of the convert John Henry Newman.

Newman, of course, also ran into trouble after his conversion, not with a pope but with a council. He did not support the doctrine of papal infallibility being debated at Vatican I. But once it was adopted, he overcame his difficulties with the dogma on the strength of the church's having defined it. Newman understood that the burden was on him to think with the church, sentire cum ecclesia, not the other way around. When he had a concern, he voiced it respectfully, and when he had a difficulty, he did not advertise it with the intention of spreading doubt. He did not accuse the pope of committing a heresy. He did not suggest a schism was in the offing and avoidable but for the faulty theology of the pope. And, lest we forget, the pope of his time was Pio Nono!

Ivereigh quotes an Irish friend who returned to the church, so not really a convert but a lapsed and returned RC, and the quote gets to the heart of the matter and echoes Newman:

I keep seeing people who seem to have converted mainly because the Church teaches things that match their ideological outlook, whereas when I came back it was a case of doing so because I thought the Church had historical authority to teach things even if they sounded mad or were inconvenient.

Historical authority. It is this belief that undergirds all our particular arguments. Of course, we can, like Newman, believe that certain doctrines need development, but in the end, all of us as Catholics are called upon to say and believe what the candidates say at the Easter Vigil when they are received into the church: "I believe and profess all that the holy Catholic Church believes, teaches and proclaims to be revealed by God." The tense is important, the present tense, not the past tense. The church is still believing and teaching and proclaiming. Faulting a pope for developing the teaching of the church is like accusing a comedian for being funny. It is the pope's job to do that, and if you don't like what the pope has to say, there are ways to voice your concern that are appropriately humble and not obnoxious.

At no time have I suggested that hubris about the faith is limited to recent converts. Quite the contrary. George Weigel's famous "red pen, gold pen" hermeneutic regarding Pope Benedict XVI's encyclical Caritas in Veritate evidenced a "more Catholic than the pope" stance. My article at the time in America magazine was entitled "New Heights of Hubris from George Weigel."

Nor is hubris confined to the ecclesial right. The most recent issue of contained an editorial that included these remarkable sentences: "We strongly encourage dialogue between laypeople and church leaders regarding all issues in the sexual sphere. But we also recognize that dialogue can have its limits, particularly if those in leadership do not demonstrate an openness to developing the church's teaching on sex and sexuality." There was no call for those who struggle with, still less dissent from, church teaching in these matters to "demonstrate an openness" to the possibility that the church might have something to teach them.

I am sure I could, if I were so inclined, point to half a dozen or so instances of journalistic hubris that carry the byline Michael Sean Winters. But I leave such unpleasant tasks to my critics, and it is the mutual criticism of each other that keeps the journalistic craft from descent into boredom and the discussion within the church vibrant.

In the final analysis, I personally subscribe to the ecclesiology of James Joyce: "Here comes everybody." And while nobody among the everybody is free from criticism, not even the pope, the relentless hounding of him by journalists whose clothes are still wet from having swum the Tiber is a thing I find tiresome. I shall work on being more patient if they will work on submission of intellect and will to the teaching of the church as proclaimed by Pope Francis.