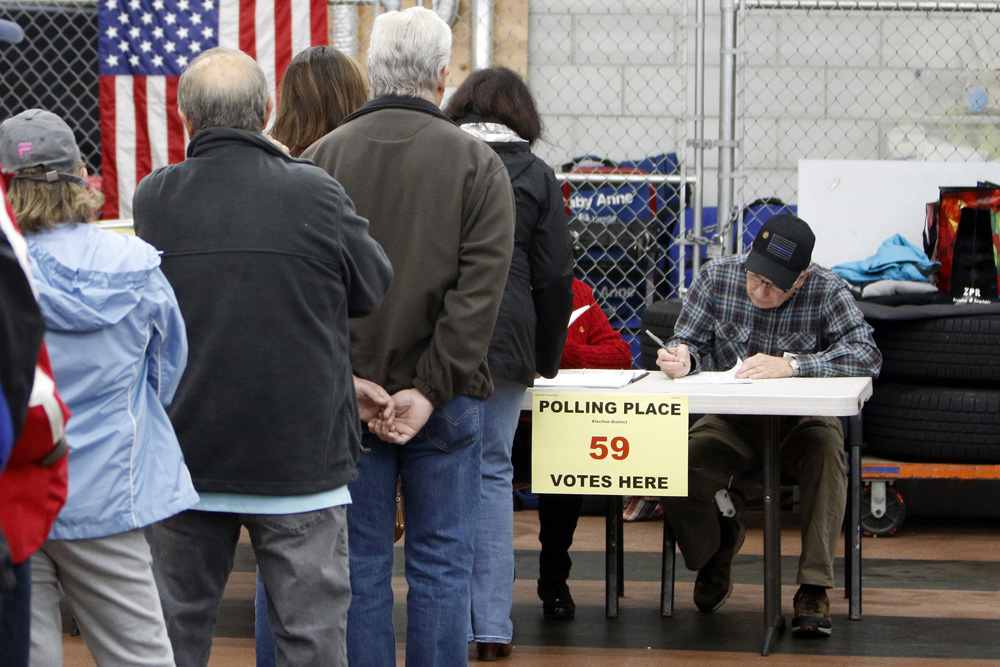 Voters line up prior to casting their ballots at a polling station in Nesconset, New York, on Election Day Nov. 6, 2018. (CNS/Gregory A. Shemitz)

Back in January, I pointed out that "candidates whose campaigns are based on their opposition to an incumbent — Mitt Romney in 2012, John Kerry in 2004 — or on the strength of their résumé — Clinton in 2016, Bob Dole in 1996 — lose elections." I noted that Sen. Elizabeth Warren rarely mentions President Donald Trump in her campaign appearances or in the debates.

The Democrats, not just the presidential candidates but also congressional candidates in districts Trump won, need to find ways to speak to Trump voters, to make sure those voters know that while Democrats may want to indict Trump, they do not want to indict his supporters. They need to help fashion a rhetorical and policy "off-ramp" for Trump voters, not only so that they have a better chance at winning, but so they have a shot at winning big. Only a truly large win in 2020 will position the next president to begin uniting the country, or enough of it, so as to move the nation forward.

The first key is to focus on new facts that will allow those who have spent the last three years assuaging their conscience to regain it. In an interesting column in The New York Times, Peter Wehner interviewed many Republicans about how Trump has changed the party, and done so in ways that make it difficult for Republicans to suddenly jump ship: " 'At this point,' this person went on, 'condemnation of Trump is condemnation of themselves. They've let too much go by to try and assert moral high ground now. Calling out another is one thing; calling out yourself is quite another.' "

But, the rationale for "asserting the moral high ground now" is found in the transcript of the president's call with Ukrainian President Volodymyr Zelensky. Democrats need to say to Trump voters: In 2016, we didn't know about any connection with the Russians. The Mueller Report detailed some of those connections, even while concluding it could not indict the president. But, surely, if you could excuse a first-time candidate for not recognizing the danger of cavorting with a foreign power to influence an American election, going forward, the president had to know this was something he could not do. And he did it anyway. People who voted for Trump were not voting for this kind of illegal behavior and political corruption.

That transcript yields more fodder. Candidate Donald Trump argued that the Washington insiders like the Clintons were more interested in serving their own interests than in taking care of the American people. They cared more about being nice to our allies than watching out for hardworking Americans. He promised the American people he was the guy who would fight for them, which had the further effect of making his frequent missteps and vulgarities seem like an asset, not a liability. But, when he spoke with Zelensky, he did not say he needed a favor for the American people. He said he needed a favor for his own reelection effort. In fact, I counted 27 times the president said "I" in that conversation and only four times he said "we." Add in several mentions of the United States, and you still have a solipsist of the first order on your hands.

Another related part of Trump's pitch was that he was already rich, and so he would not line his pockets the way the Clintons had done. The charge carried some merit: No one ever accused Bill and Hillary of being disinterested on the subject of money. But, in office, the president has been keen to line his pockets and to let his subordinates know they should line his pockets too. How else to explain the U.S military's sudden penchant for staying at Trump-owned resorts overseas? Or his decision not to place his own company and assets in a blind trust?

The core of Trump's 2016 campaign appeal was anti-establishment. That is how he won over some voters who had previously voted for President Barack Obama. They voted for change in 2008 and were still voting for change in 2016. His appeal was especially aimed at working class voters who have been getting the shaft from the neoliberal economic policies presidents of both parties had pursued in the past 40 years. Then he filled his administration with guys from Goldman Sachs and the working class is still getting shafted. This may be a harder case for former Vice President Joe Biden to make. But, last weekend, Kate McKinnon on "Saturday Night Live" did a great impersonation of Warren. The key moment was when Colin Jost asked about "some big money donors for Democrats who said they would rather vote for Trump than you." She answers, "You're kidding me. The billionaires don't like me? Oh no." Watch the video. McKinnon then moved effortlessly into a slap at Hillary Clinton's willingness to take checks from Wall Street. It was splendid.

In the days after Trump's election, Krystal Ball at The Huffington Post wrote a searing critique of Clinton's campaign and its inability to even hear working class concerns:

They said they were facing an economic apocalypse, we offered "retraining" and complained about their white privilege. Is it any wonder we lost? One after another, the dispatches came back from the provinces. The coal mines are gone, the steel mills are closed, the drugs are rampant, the towns are decimated and everywhere you look depression, despair, fear. In the face of Trump's willingness to boldly proclaim without facts or evidence that he would bring the good times back, we offered a tepid gallows logic. Well, those jobs are actually gone for good, we knowingly told them. And we offered a fantastical non-solution. We will retrain you for good jobs! Never mind that these "good jobs" didn't exist in East Kentucky or Cleveland. And as a final insult, we lectured a struggling people watching their kids die of drug overdoses about their white privilege.

I do not know if the upper echelons of any Democratic campaigns really recognize the degree to which their perspectives and experiences have been shaped in ways that make it hard to connect with middle America.  Borrowing a page from Pope Francis, they need to dialogue, dialogue, dialogue, and really listen to the concerns of working class voters who resent being lectured about their values and lifestyles.

The eventual Democratic nominee will also need to say something like: If you voted for Trump because you wanted to shake things up, and realize now he did no such thing, and you were willing to look past some of his unsavory remarks because you really thought he might change things for the better,  come and join our campaign. If you voted for Trump because of his race-baiting and immigrant-bashing and women-demeaning comments, you need a conversion before you can join our campaign. We should sympathize with those whom Trump snookered, not those who warmed to his vileness. And we know many Trump voters were not racists: They had voted for Obama twice.

Yesterday, I called attention to E.J. Dionne's column that pointed out Trump's base is smaller than some think it is. "Those of us who support impeachment don't deny that there is a 'Trump base' but insist that mountains of polling evidence show that it amounts to 25 to 30 percent of voters at most," Dionne wrote. "The rest of the 46 percent who voted for Trump have real doubts about who he is, how he behaves and what he is doing to our country. Even those of us who disagree with them on a variety of issues see this substantial part of Trump's constituency as made up of rational and engaged citizens open to persuasion."

The more former Trump voters break with the president and support the Democratic nominee, the better the chance our next president will be able to address not only the mess Trump will leave, but the mess that got him elected in the first place — the long years of neoliberal economic policies that devastated whole communities. The next president may not be able to achieve everything that needs to be done, but if she can at least reset the economic rules, and denude corporations of some of their political power, the country can move again in the direction of the common good and the social re-enfranchisement of millions of Americans who currently feel they are collateral damage in a globalized economy. That is how you build the kind of political coalition our country has not seen since Franklin Roosevelt, aided by Msgr. John A. Ryan, built the New Deal coalition and truly changed the social compact.

A version of this story appeared in the Oct 18-31, 2019 print issue under the headline: Candidates must fashion an 'off-ramp' for Trump voters.