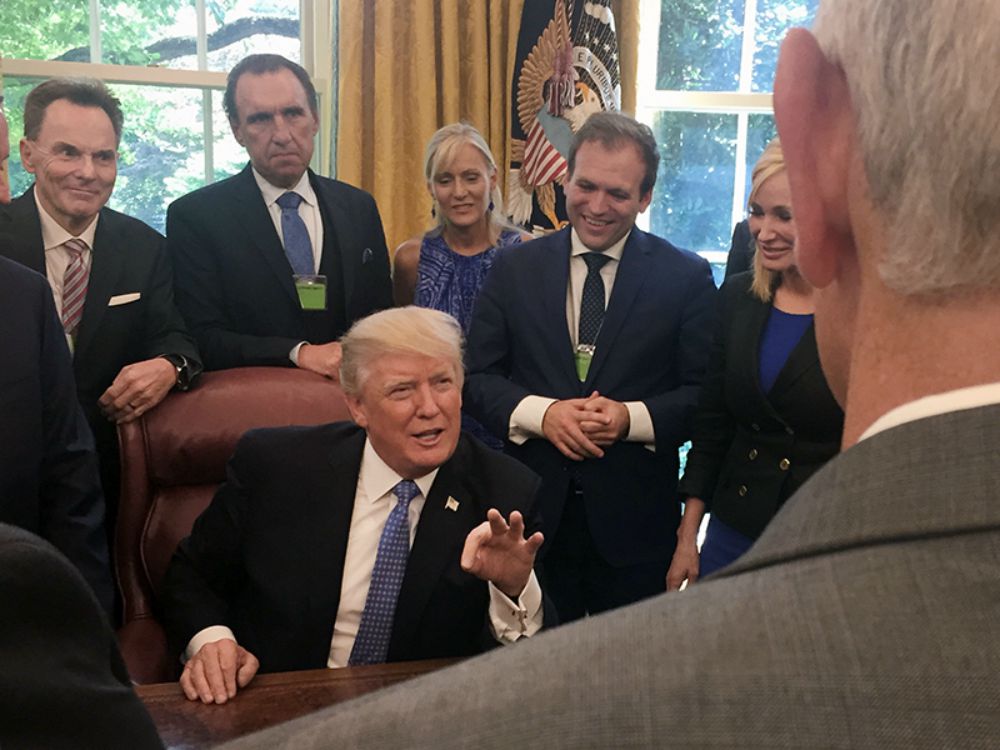 Elisabeth Dias at Time magazine reported this week on a letter from a group of evangelicals who advise President Donald Trump. The letter was sent to Pope Francis requesting a meeting.

According to that article, and a subsequent article in The Washington Post, the letter was sent through the Archdiocese of Washington, D.C. Well, I remember writing letters to Santa Claus as a boy and to similar effect: A source at the archdiocese told me that they certainly did not forward any such letter to the Vatican and, in fact, they never would because any such letter would be redirected to the papal nuncio.

"Ah!" you object. "Why would evangelicals know to go to the papal nuncio?" Well, remember they got Kim Davis in to see the pope through the nuncio. And the "they" in question is not a figment of my imagination. Davis' lawyer was Mat Staver of Liberty Counsel, and the current letter was signed by Johnnie Moore, a former vice president at Liberty University and colleague of Staver's.

"We think it would be of great benefit to sit together and to discuss these things," the letter to the pope reads in part. "Then, when we disagree we can do it within the context of friendship. Though, I'm sure we will find once again that we agree far more than we disagree, and we can work together with diligence on those areas of agreement." How lovely.

I have a message for Francis too: Don't do it! Better to meet with the dubia cardinals than with these pastors who seek to give cover to a presidency that is repulsive to almost everything we Catholics believe about the social and political significance of the Gospels. It is a trap.

The outlines of the trap were set forward in the very same article that provoked the letter: the Civiltà Cattolica article by Jesuit Fr. Antonio Spadaro and Presbyterian Pastor Marcelo Figueroa that discussed the alliance of conservative Catholics and fundamentalist evangelicals, and the regrettable consequences of that alliance. I have written about that article extensively and need not revisit my arguments here except to note that the signatories of the letter demonstrate better than any argument I can make how right Spadaro and Figueroa are.

The author of the letter, Moore, is also a kind of spokesman for the pastors who support Trump. I first encountered him when researching my biography of the late Rev. Jerry Falwell. Moore was a traveling companion and communications expert for Falwell and went on to become a vice president at Liberty University, the school founded by Falwell père and now run by Falwell fils. As I made clear in the epilogue to that book, there is no person in America who is more responsible for the rise of the "nones" than Falwell, that he "provoked many Americans to see a lack of religious affiliation as preferable to accepting his brand of conservative Christianity." During last year's campaign, many of my friends and colleagues were surprised by the warm embrace Trump received from Falwell Jr. Not me. The crude politicization of the faith that was the trademark of Falwell Sr. had been passed on to the son, and he wasn't going to let Trump's vulgarity or seeming lack of Christian formation get in the way.

Another signatory of the letter is Pastor Paula White, a prosperity gospel preacher from Florida whose prayer Donald Trump Jr. credited with repairing the teleprompter that had broken just as he prepared to address the Republican National Convention. (You can't make this stuff up.) The prosperity gospel is arguably the grossest aberration of the Christian faith to emerge from contemporary fundamentalism, gross not only in how it distorts the Gospel but also in how the pastors who extol it seem to make millions of dollars while doing so. White, like all evangelicals, is a great defender of traditional marriage from the scourge of gay marriage. In fact, she likes marriage so much she has had three of them, just like Trump.

Then there is my personal favorite evangelical pastor, the Rev. Robert Jeffress, pastor at First Baptist Church in Dallas. This is the same pastor who wrote that Barack Obama was "paving the way" for the Antichrist. The same pastor who said that businesses that were "transgender-friendly" were a greater threat to the United States than the Islamic State group. The same pastor who said Jesus Christ would not protect undocumented immigrants. I am all for ecumenism, but I do not worship the hateful God that Pastor Jeffress invokes with such regularity and with such simplistic callousness.

What these pastors share is a willingness to squeeze the Christian Gospels into a pre-arranged ideological narrative, and when the fit is obviously inexact, the ideology wins, not the Gospels. It would be one thing for the pope to meet with Christian pastors who simply have a different interpretation of the Bible. But there is nothing to be gained from a meeting in which the agenda is political and the interlocutors have shown themselves to be more concerned with their political orthodoxy than anything else. This invitation is a set-up, an attempt to get a photo op with the smiling pope, a blessing on their mission to help Trump "make America great again."

That mission is not Francis' mission. He does not seek to reduce the Christian Gospels to a prop for Americanism, still less a prop for the consistently xenophobic and occasionally racist nationalism that is at the heart of Trump's political creed. These fellow travelers in clerical garb are not seeking a meeting of the minds with the pope. They are seeking political advantage. I fear that they were encouraged in their letter by some conservative Catholics, which would, again, only prove the point made by the original article in Civiltà. I am confident our Holy Father is astute enough to see through this faux ecumenism to the political agenda at its core, and that he will want no part in it.

A version of this story appeared in the Sept 8-21, 2017 print issue under the headline: Evangelicals request papal audience, but it's a trap.