What we don't know about Francis' Kim Davis meeting 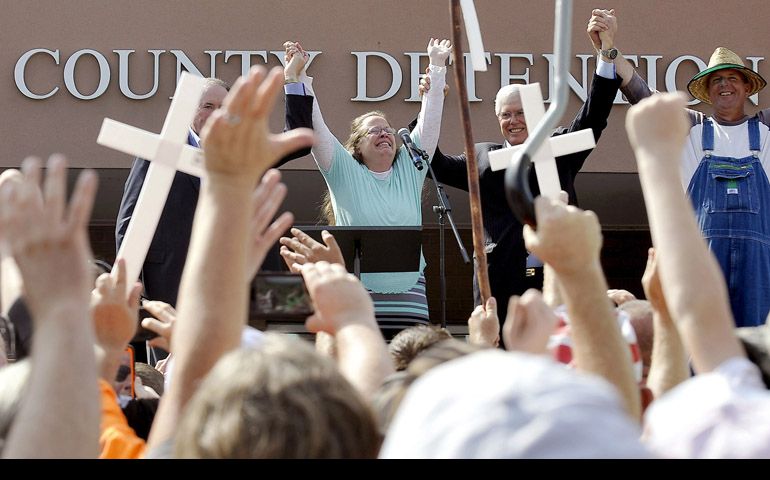 Kim Davis, a Rowan County, Ky., clerk, celebrates her release Sept. 8 from the Carter County Detention center in Grayson, Ky. The Vatican Sept. 30 did not deny reports that while in Washington, Pope Francis briefly met with Davis, who was jailed for refusing to issue marriage licenses to same-sex couples. (CNS/Chris Tilley, Reuters)
This article appears in the Francis in the United States feature series. View the full series.

Rome — For a while there, we had become used to papal mis-messaging.

The examples during Pope Benedict XVI's papacy were legendary. Take, for one example, his 2006 speech in Regensburg, Germany. Meant as an invitation for dialogue between Christians and Muslims, the message of the speech was overcome by a phrase he quoted from a 14th century Byzantine emperor that deeply offended Muslims.

Until now, Pope Francis had seemed much better about sticking to his message and not undermining himself. But that's exactly what some think he has done by meeting secretly during his U.S. visit with Kim Davis, the Kentucky county clerk who has refused to issue same-sex marriage licenses.

Just hours after giving his incredibly well-received speech to a joint meeting of Congress, Francis apparently met with Davis at the Vatican's Washington embassy and told her to "stay strong" in her objection, for reasons of conscience, to issuing the licenses.

For many, the mis-message is rather stark.

Throughout the U.S. visit, the pontiff was very careful in what words he offered about issues of religious freedom -- placing it always in the context of other freedoms, and refusing to use harsh language about the issue.

In the Congressional message, for example, Francis only spoke of religious freedom once -- in the context of fighting religious fundamentalism.

"A delicate balance is required to combat violence perpetrated in the name of a religion, an ideology or an economic system, while also safeguarding religious freedom, intellectual freedom and individual freedoms," the pope told U.S. political leaders a the Capitol Sept. 24.

In a later speech in Philadelphia originally described as an address on religious liberty, Francis focused much more on tying together rights to religious and cultural freedom.

Speaking outside the iconic Independence Hall Sept. 26, the pope turned to recent Latin American immigrants and asked them "not to forget that, like those who came here before you, you bring many gifts to your new nation. You should never be ashamed of your traditions."

So, what happened? Why arrange a meeting with someone who has become a touchstone of controversy for her refusal to issue same-sex marriage licenses, even after a compromise was worked out where she would not have to sign the licenses?

And why keep the meeting secret, in a sign some are taking as a duplicitous desire by the pope to say one thing and then do another?

Part of the problem with the story at the moment is that no one affiliated with the pope is offering explanations. The only persons who have given interviews about the meeting to this point are Davis and her lawyer, Mat Staver.

Vatican spokesman Jesuit Fr. Federico Lombardi has offered what can only be described as a non-committal non-denial. "I do not deny that the meeting may have taken place, but I have no comments to add," Lombardi told journalists in a brief Italian-language press release Wednesday.

In lieu of answers, here are some key questions:

How was the meeting between Davis and Francis arranged?

Papal trips are planned meticulously. Journalists who travel with the pope receive thick booklets outlining their movements almost by the minute. It tells them where to be exactly when each day, leaving only small windows for improvisation.

Surprise meetings do happen, but those are normally not much of a surprise. Francis, for example, nearly always meets with members of his Jesuit order during his trips abroad, even though those trips are not usually mentioned on the official schedule.

Meetings with sexual abuse survivors, while normally telegraphed far in advance by the Vatican, are also normally not formally listed on the schedule. The Vatican says that is to protect the privacy of the survivors, who may choose not to speak about their meetings.

The question: How did Davis' meeting get on Francis' schedule while he was in D.C. for only two days?

Which leads to more questions. While the Vatican can set up meetings on its own, it normally relies on advice from local bishops and its ambassadors during papal trips to different countries.

What, if any, advice did the Vatican receive from the U.S. bishops' conference? Did someone close to Davis reach out to the conference, or to an individual bishop?

The meeting took place at the apostolic nunciature. What, if any, advice did the pope's embassy give to trip organizers about this meeting? Did someone close to Davis reach out to the nunciature, or even to the nuncio himself, Archbishop Carlo Vigano?

Somebody had to help make the arrangements. The question is who.

What did Francis know of Davis' background and views?

There is no real direct evidence to say whether the pope knew about Davis' stance in Kentucky or not. While Davis says the pope told her to "stay strong" and gave her and her husband rosaries as a sign of solidarity, Staver says there was no translator in the room for their conversation.

Although Francis is able to speak some English -- and even spoke from English language texts several times during his U.S. visit -- his fluency in the language is limited. Anyone watching him speak English in a YouTube video can see that.

Interestingly, during a press conference on his flight back to Rome Sept. 27, the pontiff was asked about cases like Davis' and gave a very general, almost bland answer. He did not refer to meeting Davis or her arguments for not issuing marriage licenses to same-sex couples.

Given the opportunity, the pope did not mention Kim Davis or a specific right to deny marriage licenses to same-sex couples.

What signal did the pope wish to send with the meeting?

This question is perhaps the most difficult, as it's hard to answer without answers to the first two questions.

If Francis had the meeting arranged with a clear understanding of Davis' views, then the signal sent is rather different than if she was just someone he was introduced to at the embassy without specific knowledge of who she was.

But one common theme the pope frequently expresses is his idea of a "culture of encounter." Such a culture, for him, means that relationship is always possible, even with those with whom we might disagree.

The pope's keyword is dialogue, and his frequent exhortation is that people speak with parrhesia, or boldly and without fear.

In fact in a meeting with some 300 U.S. bishops in Washington Sept. 23, the pontiff told them: "Dialogue is our method, not as a shrewd strategy but out of fidelity to the One who never wearies of visiting the marketplace, even at the eleventh hour, to propose his offer of love."

That method of dialogue and parrhesia has led the pope to meet with all sorts of people.

That activist, Simón Cazal, leads a group called SomosGay that helps thousands of young gay people who are physically harmed by their families because of their sexual orientation.

At the time, Cazal said he hoped the encounter would lead others to think the pope was "defending the life and integrity" of gay people.

Vatican | What we don't know about Francis' Kim Davis meeting

Pope's quotes: Agents of their own destiny

The Amazon synod is about the concept of social sin, not married priests