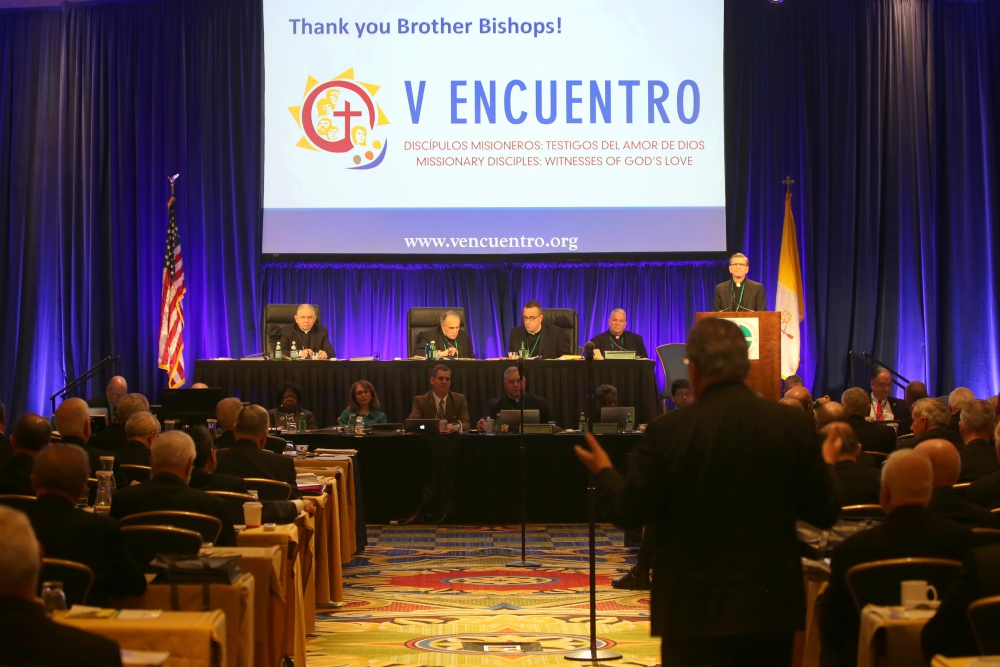 San Antonio Archbishop Gustavo García-Siller, at podium, listens to a question as he gives a report on V Encuentro at the 2018 fall general assembly of the U.S. Conference of Catholic Bishops in Baltimore. (CNS/Bob Roller)

Monday, I began my curtain raiser for the upcoming plenary of the United States Conference of Catholic Bishops, focusing on the election of new officers and committee chairs. Now, the conference has released the agenda and we can look at the items under discussion.

The agenda buried its lede, as the most important item did not appear until the sixth paragraph: "to lead the process of developing a new formal statement and comprehensive vision for Hispanic/Latino ministry in response to the V Encuentro process, to be developed and approved by the bishops during the next USCCB strategic planning cycle, 2021-2024."

Ignore the lousy syntax. The successful Encuentro process in 2014-18 was not just a bit of good news in a sea of bad: The future of the Catholic Church in this country is either Latino or it is nonexistent. The stated need to wait until the next round of strategic planning shows the lack of nimbleness we expect from a bureaucracy, but it shows something else, too.

The U.S. bishops' conference has spent much of the last 15 or so years focused on ephemera. It has made plans about plans. It has conflated its work with that of several special interest groups like the Becket Fund and the National Right to Life Committee. The latest Pew numbers indicate that for the first time, Hispanic Catholics are less than half of all Hispanics in the country. None of the bishops will stand up and insist that the usual planning process be speeded up to focus immediately on the needs of Hispanic ministry, but someone should.

The bishops, according to the press release announcing the agenda, will also vote to approve a short letter and five short video scripts to supplement "Forming Consciences for Faithful Citizenship," the teaching document for the faithful on the political responsibility of Catholics. The decision not to undertake an entirely new document was made at the spring meeting in 2018 and, as I noted at the time, that decision amounted to an admission that the conference was unwilling to try to negotiate their differences. Indeed, many bishops who agree that the current document is insufficient nonetheless voted to retain it, worried either that a new debate would expose the depth of the divisions within the hierarchy, or that the document might come out worse than what they had.

The core "Faithful Citizenship" document was drafted in 2007. Pope Benedict XVI was in his second year as pope and George W. Bush was in his second term as president. We had not yet elected our first black president, nor discovered the resurgence of racism that election occasioned. The Affordable Care Act had not been adopted. The acute danger of climate change was only coming into focus for most people. Donald Trump was a reality TV star. Congress was close to delivering comprehensive immigration reform, and the current horror at the border was unimaginable.

Yet, the bishops will be debating a few videos and a short letter. It is to weep.

Second, how does this new material deal with immigration? Will the bishops denounce the inhumane policies of the Trump administration for the assault on human dignity that they are or will the bishops soft-peddle their position with some rhetorical nonsense about how you can't be a country without a border?

Third, will the new items deal with the issue of character, the need to vote for candidates of integrity? I predict there will be a basic balance, achieved by means of vagueness. It will be strong on immigration, and it will duck the now-clamant issue of character.

The agenda press release states that the bishops will vote on "Revised Strategic Priorities" for their 2021-24 strategic plan. In addition to highlighting the need to focus on Hispanic ministry, will the new priorities include something on protecting the environment?

As a body and individually, the bishops have done squat on implementing Laudato Si'. Very few bishops have begun converting their physical plant to sustainable energy, and chancery staff around the country raise fears about liability or cost to kill any initiatives in this area. (One cannot but wonder how many such staff are Republicans who harbor doubts about the science behind climate change.)

Focusing on the environment is also a twofer: Not only is there no more urgent moral issue, indeed no more urgent life issue, but young people who are increasingly identifying as "nones" are deeply motivated by environmental concerns. Too many environmental activists lack the moral language and logic, beyond simply assertion of scientific data, that will galvanize our society to the kind of radical action the climate emergency demands. Let Pope Francis come to the rescue. He has done the heavy lifting. The bishops need only to follow his lead.

The press release made no mention of a presentation on evangelization by Los Angeles Auxiliary Bishop Robert Barron, a presentation he announced at the June meeting would take place. I have already registered my concerns on that score. What Barron does is more properly called apologetics, and it is a far cry from the approach to evangelization that Francis has recommended. Indeed, the just-concluded synod overwhelmingly rejected the idea that evangelization should begin from the premise that we Roman Catholics have all the answers.

A priest friend told me that on his first assignment, the pastor gave him sage advice: "People don't care what you know. They care that you know them." That is not exactly the model Barron follows.

We are told the bishops will receive a report on the new third party reporting system by which victims of clergy sex abuse can file an allegation against a bishop. The bishops probably will not discuss the implementation of Vos Estis Lux Mundi in open session, but someone, maybe the nuncio, has to impress upon the bishops that if they do not police each other, and do so promptly, what little credibility they have left will evaporate. This long summer of inaction on the situation in Buffalo, New York, was inexcusable.

It has been two months since I ventured the opinion that the bishops should scrap their agenda and focus on how they can prevent the emerging schism on the right. The reaction to the Synod of Bishops for the Amazon from the anti-Francis crowd has only confirmed me in my belief that this, along with addressing the needs of Hispanic Catholics, is the most pressing issue facing the bishops.

Again, I do not expect any conversation along these lines in open session but in executive session, someone has to speak up.

I am not a bishop-hater. Indeed, I bristle whenever someone says, "The bishops this ..." or "The bishops that ..." Which bishops? Some are clowns, and some are among the most competent people I have met. Some are genuinely holy, some are hilarious, and some are both. Others give me the creeps. But ever since Francis was elected, I have approached these meetings with one verse of Scripture running through my head, Isaiah 43:19: "Behold, I am doing something new. Do you not perceive it?"