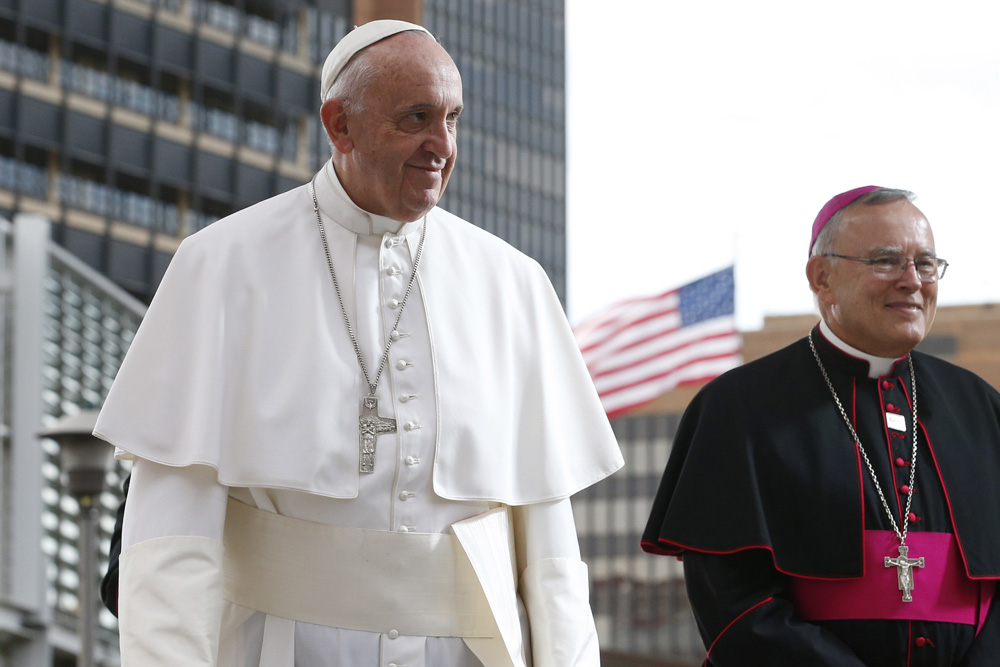 Pope Francis and Archbishop Charles Chaput of Philadelphia leave Independence Hall Sept. 26, 2015, during the papal trip to the United States, after the pope gave an address about religious liberty and immigration in Philadelphia. (CNS/Paul Haring)

Last month, I called attention to an article at First Things by Francis Maier, Archbishop Charles Chaput's longtime amanuensis. In it, he criticized Fr. Antonio Spadaro, professor Massimo Faggioli and myself for writing articles that he termed "bullshit." That same Maier delivered a lecture at St. Charles Borromeo Seminary in Philadelphia last month that confirms at least some of the theses he labeled bullshit in his First Things' article. The lecture is a little masterpiece, a quintessence really, of the conservative Catholic worldview.

The first characteristic of conservative Catholic commentary is they misunderstand the founding of the American republic. Maier states: "America is, in a sense, a legal fiction. We have no common ethnicity. We have no long national history. We were created ex nihilo as a rational experiment in ordered liberty. And we're held together by a common commitment to the law; law that we sustain — or at least, that we were intended to sustain — by a common biblical morality."

The Enlightenment was in full swing when the American experiment began, and while it is true that a biblically inspired morality was in the air that the founders were breathing, it is also true that their understanding of biblical morality did not bring them to conclude that slavery and killing native populations were wrong. And, Roman Catholics in the late 18th century derived most of their moral ideas from natural law thinking. And, what is more, the reduction of religion to morals in the public square has been one of the consequences of Protestant ideas drawn from that same Bible and from the founders' grounding in British political ideologies, one of the points Spadaro made in the essay Maier criticized.

Does the lecture pine for the 1950s as a kind of golden age from which there has been nothing but decline? "The country we were six decades ago, and the country we are now, are two distinct creatures: similar on the surface; different underneath," he states. "And one of the differences is that we're now cocooned in a kind of narcotic haze of noise and consumer appetite that distracts us from understanding our situation and changing it for the better. We Catholics have been very quick to accept words like 'diversity' and 'inclusiveness' as positive values — and of course they are, when they're properly understood. But we've been very slow to grasp how and to what end those words are being used against us by a sexual revolution that's deeply intolerant of Christian belief."

This dystopian vision seems to be missing some logical connections. What does the "narcotic haze" have to do with "diversity" or "inclusiveness"? Of course, the marker of cultural decline with our conservative Catholic friends always comes down to sex. Why not focus on how the "consumer appetite" has diminished our sense of social solidarity? In the next paragraph, Maier rightly criticizes modern libertarianism as antithetical to Catholic belief but, again, focuses only on sexual issues and abortion. Do not libertarian ways of thinking, combined with a consumer appetite, affect the environment in immoral ways too? Multinational exploitation of poor countries? And, did the "sexual revolution" use the idea of diversity against "us" because it was previously intolerant of Christian belief? Might the millions spent by Christian and Catholics organizations on efforts to keep gays and lesbians from achieving basic civil rights have something to do with the hostility? And why is the "sexual revolution" personified, as if it could make a decision to attack the church or not?

Real collegiality among bishops can often seem to occur in spite of, rather than because of, formal ecclesial structures. Why is that important? It's important because it makes current arguments for decentralized Church "synodality" so problematic. In an age of confusion, decentralization can be a bad idea. But it's an especially bad idea when the successful creatures of a national Church bureaucracy become — in effect — the formative authority in national Church life.

You see the problem. Synodality is not primarily about a different organizational model. It is primarily about learning to listen and dialogue. It is about a different model of building collegiality from that used in the U.S. throughout the 20th century, one that is indeed heavy on bureaucracy. (And, there have been times when the U.S. bishops' conference acted in a synodal way, before it was taken over by culture warriors.) Instead, synodality is unsurprisingly more akin to the model adopted by the Latin American bishops in the last half of the 20th century, and by our Eastern brothers in the faith through the ages. It starts not with bureaucracy, but with prayer. Conservatives may have forgotten but the pope more or less had to insist the U.S. bishops take a group retreat together, before trying to figure out a response to the resurfacing of the sexual abuse mess.

Of course, if you think you already have all the answers, and have mastered the riddles of salvation, you tend not to see much value in listening or dialogue. And, it is hard not to see the phrase "an age of confusion" as a swipe at Francis, another typical conservative talking point even though one of the things that really bothers them about Francis is that his trenchant critique of capitalism and modern day pharisaical attitudes is so unconfusing, so simply stated, so accessible.

If you think I am jumping to conclusions about the veiled swipe at Francis, on the next page we find this:

Humanae Vitae — which Paul VI, John Paul II, and Benedict XVI all repeatedly reaffirmed — is now again being undermined. The sea change in spirit and purpose at Rome's John Paul II Institute, which focuses in a special way on marriage and the family, is very revealing. Talk about 'new paradigms' in Church life too often masks a hunger to sign a peace treaty with the world; to make the Christian path more congenial and less embarrassing. But the cross is never congenial and always embarrassing; yet it's the unavoidable door through which we follow Jesus Christ.

In what way is Francis seeking a "peace treaty with the world?" Or those like Cardinal Pietro Parolin who first spoke of "new paradigms" or Cardinal Blase Cupich who gave a major talk on new paradigms at Cambridge, in what way are they failing to take up the cross?

A final item on the conservative checklist: What diatribe would be complete without an attack on gays? The lecture reads:

Our Church leaders deserve the respect due their offices. But when they claim that the sexual abuse of children by clergy is mainly an issue of "clericalism," a lot of lay people hear that as insulting and absurd. My wife and I don't believe that. None of our friends with a family believes that. And we don't believe it because it's just not true. The fact that a man has a same-sex orientation does not mean he's going to abuse kids or even be attracted to them. But to downplay the major role homosexuality has played in the clergy abuse problem is frankly infuriating.

I do not know what Maier's wife and his friends believe or don't believe. But, most of the studies I have seen about pedophilia indicate that it is a crime of opportunity, that perpetrators attack the victims that are most accessible, so that usually when found within a family, it is a father attacking a daughter and if it is in the church, it is a priest attacking a boy. Just as importantly, the arguments about the role of clericalism made by myself and others invite the church to consider the culture in which both the abuse and, even more, the cover-up of the abuse happened, and why it seemed so natural for a bishop, liberal or conservative, circa 1975, to hear about a case of a priest abusing a minor and saying to himself, "Poor Father."

Maier's boss, Archbishop Chaput, has already sent in his letter of resignation and will soon be leaving the ecclesial stage. I do not know if Maier will join him in retirement. I wish them both well but I cannot wish them, and those who follow them success, in the propagation of their ecclesial and cultural vision.

The conservative Catholic culture warriors do not like Francis, but following them, not him, these past 40 years has led the church in the U.S. to where it is at. They want you to forget it, but the decline in Mass attendance, the drop in vocations, the covering up of clergy sex abuse, the rise of Theodore McCarrick, all this happened on their watch, not Francis'.

"The wind blows where it wishes," we read at John 3:8. "You hear its sound but you cannot tell where it comes from and where it goes. So it is with everyone born of the Spirit." I do not think the collapse of the cultural Catholicism of the early 20th century was the fault of the conservative culture warriors anymore than it was the fault of "the '60s" or "the sexual revolution." These kinds of things are complex and a variety of events and trends and changes conspire to make them happen. But, I am quite tired of them blaming Francis for sowing confusion when their certainty has hardly helped, aren't you?