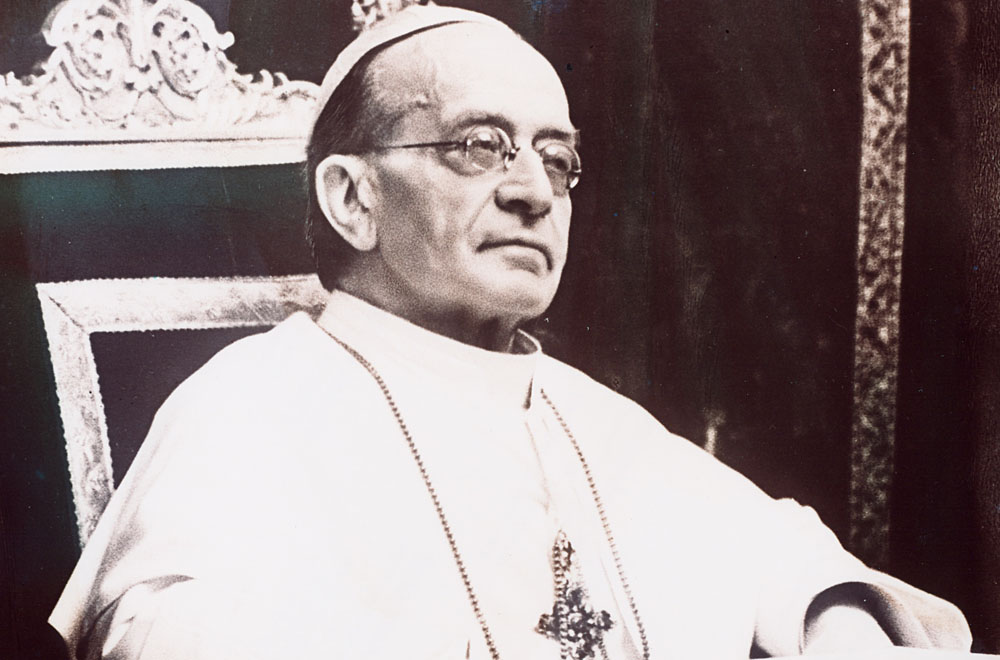 Pope Pius XI, who served as pope from 1922-1939, is seen in this undated photo (CNS/L'Osservatore Romano)

I do not think 10 minutes passed after America magazine's publication of Stephanie Slade's essay "A Libertarian Case for the Common Good" before my inbox filled with emails asking when I would respond. Pointing out the incompatibility of libertarianism and Catholic social thought has been one of the principal focuses of my writing here at NCR and of my work with Professor Stephen Schneck organizing the three "Erroneous Autonomy" conferences, all of which furthered the argument that libertarianism cannot be baptized. Ms. Slade's essay had struck a nerve and people are accustomed to my playing whack-a-mole with conservative and especially libertarian writers.

But, when I read the essay, I realized that responding to it would be difficult. Not because it raised issues I had not before considered. She writes, "When capitalism spreads to new corners of the world — especially as it begins to reach the 2.7 billion residents of India and China — it brings enormous prosperity along with it." I will stipulate that ending the Cultural Revolution was a good thing, but that is not evidence for why we should roll back environmental regulations here in the U.S., is it? And, besides, if capitalism is going to take credit for the alleviation of material poverty, it must take responsibility for those still left behind and for the nasty fact, which should be of special concern to someone writing in a journal published by the Society of Jesus, that capitalism seems to spread spiritual poverty, specifically materialism, integrally with its spreading of material wealth. This argument of hers was not new and it was no more persuasive than when it was argued by others.

Nor was I intimidated by the logic of her argument. She jumps from the benefits of capitalism to libertarian support for criminal justice reform (failing to mention libertarian support for private prisons, a truly bad idea at several levels) to the Little Sisters suing the Obama administration over the contraception mandate, not really connecting any dots but unintentionally demonstrating the limits of this, or any excessively ideological, point of view.

When you focus on one thing and one thing only, in this case individual liberty, you eventually distort your vision and you become like a prisoner kept in the dark for a very long time who is suddenly thrust into the light. The person flails his or her arms around, looking for something to hold on to. That is what Slade's essay was like.

She never finds anything much to hold on to. No, that is not right. She finds a kind of logic, a kind of evidence, a kind of an argument, but none of it has a whit to do with Catholic social doctrine.

Take what I would consider the core of her essay:

One way to think about libertarianism is that it is a political philosophy that prefers voluntary, nonviolent human interactions over coercion. Because government dictates are by nature coercive — we do not get to choose whether to pay taxes or comply with zoning restrictions — libertarians advocate relying on private solutions to problems whenever possible. Civil society institutions — family units and neighborhood groups, labor unions and trade associations, churches and charities — must do the heavy lifting. State interference in people's lives should be a last resort and then undertaken only for grave reasons.

Catholic social teaching begins with the community, not the individual. We believe that government is a positive good in social life and, while all human activity is stained by original sin, government springs from pre-lapsarian yearnings of the human heart to live in community. Since Rerum Novarum was issued in 1891, the church has taught that government must step in when private charities are insufficient to meet basic human needs and that the market does not always yield the best solutions and should be subject to regulation by the state. To characterize state involvement in the life of society as "interference in people's lives" is to fundamentally misunderstand how Catholic teaching views the state, society and the individual. Slade wrestles with none of this.

Her ignorance of Catholic teaching is matched by ignorance of how capitalism actually works. At one point, she asserts, "People exercising their values in the market can also be a check on the market." So, pizza parlour owner Teresa Ratti pays her workers a living wage. Her competition, Mr. Hayek, pays slave wages to his workers and he also refuses to let them organize. Hayek's pizzas are, therefore, much cheaper than Ms. Ratti's and, what with all the advertising about cheaper pizza, and other struggling families wanting to get pizza for their kids and needing to pay as little as possible, Hayek will put Ratti out of business unless she also reduces her payroll by paying slave wages. The market forces — you might say it coerces — people who wish to live by Catholic social teaching to act as if they were heartless libertarians. This is not mere fiction: Mr. Hayek's business model is the Walmart business model, is it not? Put differently, the formal freedom Slade and other libertarians ascribe to the market holds that the rich man and the poor man are both free to rummage through the dumpster for their dinner.

Slade quotes David Hollenbach. She doesn't understand him. She quotes Pius XI's Quadragesimo Anno but not the singular quote that is most apposite:

"Just as the unity of human society cannot be founded on an opposition of classes, so also the right ordering of economic life cannot be left to a free competition of forces. For from this source, as from a poisoned spring, have originated and spread all the errors of individualist economic teaching."

This is not whack-a-mole. Engaging this essay is like imagining Giancarlo Stanton coming to the plate and having the pitcher throw a wiffle ball at him. It is not that he couldn't hit the ball, it is that the whole scenario is more than a little weird. To the readers, it is insulting.

Which leads to a larger question I had as I read it: Why was this published? Apparently, I was not the only person to ask that question because editor-in-chief, Jesuit Fr. Matt Malone published a comment that, while referring to a different libertarian essay published last year at America, and written by Arthur Brooks, came out now, in the wake of Ms. Slade's libertarian essay.

Malone's comment is obviously self-serving: He aims to defend publishing these essays even while also asserting that they represent points of view that the editors of America do not share. Malone offers some nonsense about how those who objected were on-line readers not print readers: I am both and I suspect the reason he got so many complaints from online readers is because people did not want to wait for the print edition to arrive, they were so angry.

Malone claims America is decidedly "nonideological" and, instead, that their outlook is "Catholic and Jesuit, in that order." But that is the problem. Libertarianism is not Catholic. It is not even close to Catholic. In its premises, in its arguments, and in the real world consequences that it engenders, libertarianism is the enemy of Catholic social thought. Malone may have been wowed by the admittedly charming Mr. Brooks at some fancy event for "public intellectuals" at Aspen or on the Upper West Side, but his failure to recognize that libertarianism is not an option for Catholics who actually believe what the church teaches about social justice is astonishing. Publishing Slade's sophomoric essay in entirely inexplicable.

It breaks my heart to see what has happened to America. At a time when Donald Trump is president and Francis is pope, they are publishing Arthur Brooks and Stephanie Slade? It just doesn't make any sense. Malone should do penance at the tomb of Pope Pius XI and decide what it means for America to be a Catholic and a Jesuit journal at a time when the insights of Catholic social doctrine are so obviously needed in our body politic.