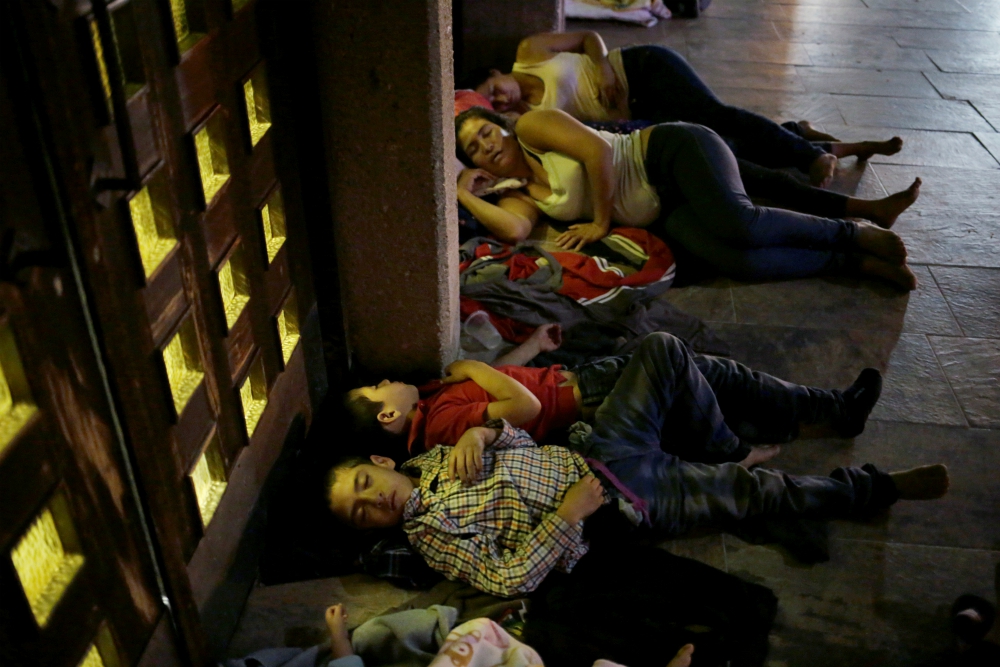 Central American migrants sleep outside Our Lady of Guadalupe Cathedral in Ciudad Juárez, Mexico, July 14. As part of the legal proceedings under a new policy established by the U.S. government, they were returned to Mexico from the United States to await their court hearings for asylum. (CNS/Reuters/Jose Luis Gonzalez)

In Puerto Rico, "RickyLeaks" may force Gov. Ricardo Rosselló from office after leaked chats showed him speaking in the most vulgar terms about fellow politicians and even the singer Ricky Martin. As well, a corruption scandal has engulfed his administration. I have long worried that Rosselló was being too generous to creditors in the negotiations to resolve the island's debt crisis. The secretary of state on the island, who is also the lieutenant governor, an office that carries much more authority than secretaries of state in the mainland, also resigned over the weekend. It's a mess.

Also at The New York Times, Michael Wear, who worked in President Barack Obama's faith-based office and on both of his presidential campaigns, warns Democrats not to be so sure of themselves about abortion. Nothing new here, but nice to see it published in the Times.

The Democrats' internal fight got pretty ugly over the weekend before President Donald Trump managed to unite Democrats by showing everyone what a real racist sounds like. But it is important to plant some markers for next time. When Rep. Ayanna Pressley says that the party doesn't need "any more black faces that don't want to be a black voice," she should be reminded that she was elected to represent the people of the 7th Congressional District in Massachusetts. So far as I know, no one elected her to be the Torquemada of black political authenticity. If Trump had not intervened, I expected we would soon be hearing about false consciousness. Yikes.

Relatedly, The Washington Post ran an interesting profile of Saikat Chakrabarti, chief of staff to Rep. Alexandria Ocasio-Cortez. I am not disturbed by his willingness to challenge the status quo, but I am concerned by his apparent moral idiocy, which is on full display in his tweets attacking moderate Democrats like Rep. Sharice Davids. And since when do Democrats need to take morality cues from someone who worked at the Bridgewater Hedge Fund? And why hasn't he filed a financial disclosure form? He may not be legally obligated to do so, but I thought progressive Democrats cared about transparency?

Adam Serwer, at The Atlantic, puts his finger on the truth in a way that is compelling and nauseating: For Trump and his base, the cruel conditions to which asylum seekers and other migrants have been subjected are not an unfortunate but necessary means to disincentivize people from trying to enter the country. The cruelty is the point and, not for the first time, it is a source of a kind of community that is frightening, not least in its ability to recur every few generations.

In listening to anti-Francis clerics like Cardinal Raymond Burke, it is hard not to think that their contempt goes beyond Papa Francesco, that it is really the Second Vatican Council to which they object. Turns out, after their latest screed was published in the National Catholic Register, those who have rejected Vatican II all along, the Society of St. Pius X, published an article commending the clerics. QED.

So, ridiculous political correctness has crossed the pond: In the UK, a civil servant in the government's Northern Ireland Office complained that for many years he had to walk past a portrait of the queen. The man said he was "offended" and he was awarded 10,000 pounds in compensation. I am no great fan of the queen or the rest of her family, but this is absurd.