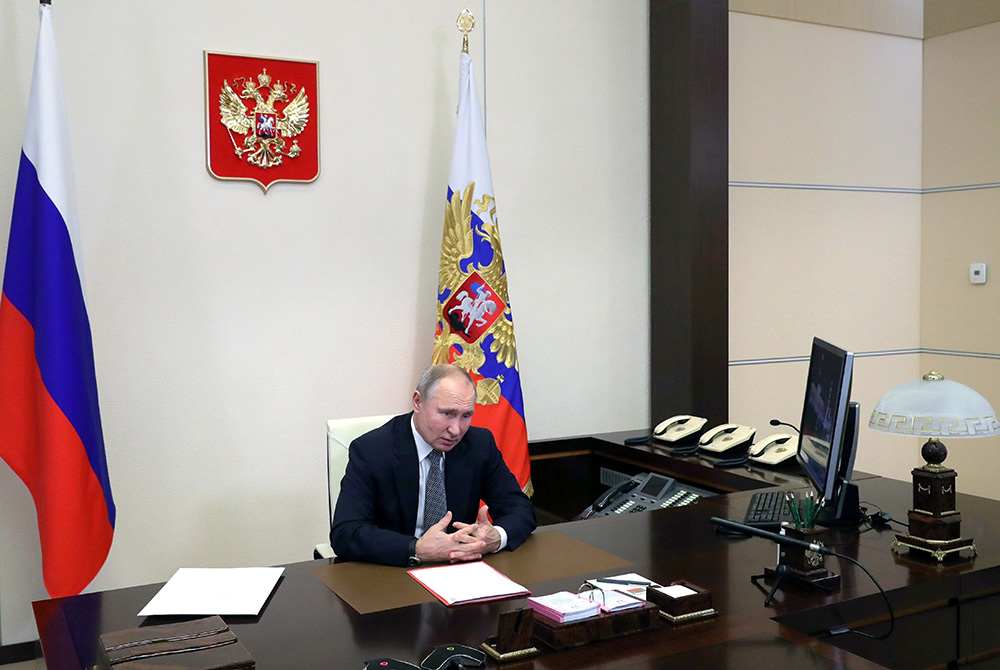 At Politico magazine, Max Bergmann and Edward Fishman write about the first major foreign policy challenge of Biden's administration: The imprisonment of Alexei Navalny and arrest of thousands of protesters in Russia. Will Western sanctions be enough to deter Putin's heavy-handed crackdown on dissidents? If not, what then? Will European countries go along with a tough stance in the face of an apparent Russian breakthrough with a coronavirus vaccine? Putin is a sinister and powerful man and dealing with him is both unavoidable and fraught.

Yesterday, I wrote about the Republicans needing to choose between Trump and democracy. Turns out that even Newsmax, the media outlet that is trying to outflank Fox on the right, has limits in its support for the former president. Mike Lindell, the pillow guy, did an interview with the network and he started to repeat debunked conspiracy theories about Dominion voting machines. I do not know what Newsmax would have done if Dominion had not announced a massive lawsuit against Rudy Giuliani for his allegations, but what they did do is shut down Lindell who, as if on cue, complained about cancel culture. When you lose Newsmax. …

At the U.S. Capitol Tuesday night, the remains of Capitol Police Officer Brian Sicknick were given the rare honor of lying-in-honor in the Capitol rotunda, an honor only accorded to very few Americans. The president and first lady went to pay their respects and, of course, CNN and MSNBC carried it live. Over at Fox News, Laura Ingraham couldn't be bothered. I suppose she did not want to admit that all those Trump supporters who had "I support the police" signs next to their "Trump 2020" signs now need to choose. If they refuse to choose, they need to explain themselves to Sicknick's family.

Looking for a bit of schadenfreude? At The New York Times, residents at 432 Park Avenue, once the highest residential tower in the world and still one of the most exclusive, have complains about the design. Surprise, surprise: A 1,400-foot-tall building will creak in the wind. Apparently, the building has other issues, including with the elevators, which must really peeve whoever bought the penthouse on the 96th floor. Most of these buildings are hideously ugly, but that did not deter the billionaires who purchased the luxury apartments. They wanted status and they got it. But one wonders if these people have ever heard of Icarus?

At Working-Class Perspectives, Joseph McCartin, who directs the Kalmanovitz Initiative that publishes the blog, writes about the current crises our nation faces and how three institutions are key to overcoming them: the Biden administration, the labor movement and the Catholic Church. The United States boasted the largest church-going working class in the West, in large part because of the Catholic Church's strong ties with organized labor.

Rebuilding those ties must now be undertaken without the assistance of one man whom McCartin mentions and who did a great deal to strengthen the ties between organized labor and Catholicism: John Sweeney died this week at age 86. Among other accomplishments, he opened union leadership to minorities and women, and he began the enormously consequential effort to realign the labor movement on the issue of immigration. When we fight for immigrant rights, labor is on the frontlines. Eternal rest grant unto him, O Lord, and may perpetual light shine upon him.

At Where Peter Is, an increasingly indispensable website, Pedro Gabriel has a thoughtful piece about the consistent ethic of life. But he errs in one regard. There is a great deal of prudence required in determining how to approach an issue, the degree to which a legal strategy might backfire for any one of a number of reasons, or why such a strategy is necessary right now. What he is absolutely right about is that no Catholic should be making excuses for the hideous disregard for unborn life that characterizes our laws today.

The website "A Broad and Ample Road" has an interesting post from Michelle Kuo and Albert Wu in which they challenge Ross Douthat's cultural myopia, and his willingness to see opinions that differ from his own as always involving some kind of secularist bias, when the bias may be something altogether different. Nicely done and I am grateful for the shout out they give to my review of Douthat's last book.

Need some music to put a smile on your face this week? Here is the great Yo-Yo Ma playing Bach's Cello concerto No. 2 in C minor while sitting all alone on Crane Beach not far from his home in Cambridge, Massachusetts. The performance was part of a global concert connected with the World Economic Forum. Let's hope the other attendees are inspired by the beauty of Ma's playing to rebuild a more humane economy!