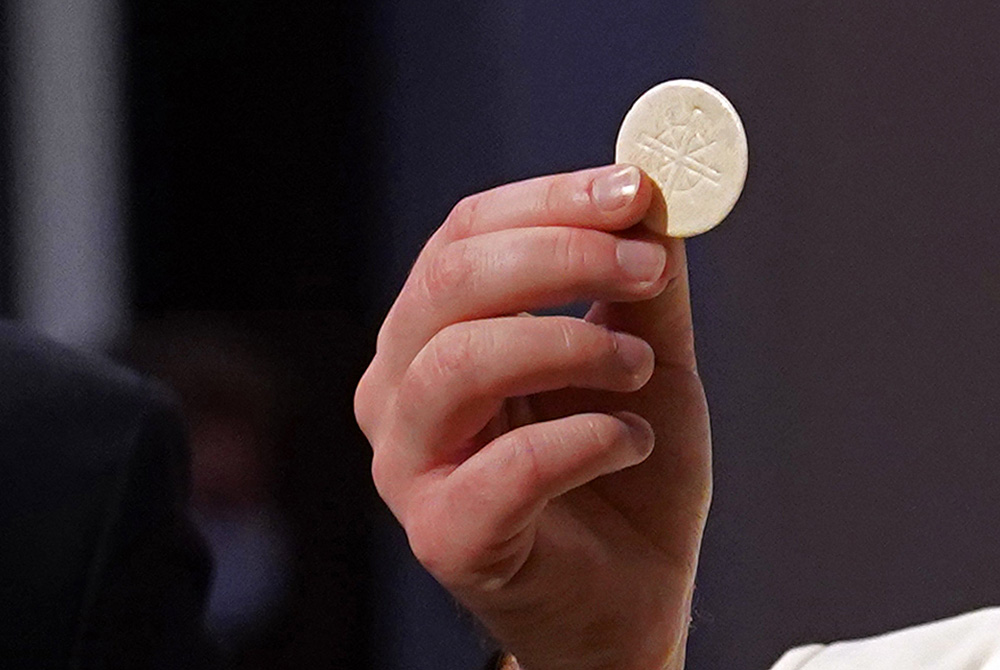 A priest gives the Eucharist to a communicant during a Mass at St. Agnes Cathedral in Rockville Centre, New York, in 2020. (CNS/Gregory A. Shemitz)

The definitive article on the issue of denying Communion to people in same-sex marriages, from Fr. Lou Cameli and published at America. Cameli carefully balances the issues involved — yes, Virginia, there is another side to the argument — and comes down decisively for the kind of pastoral accompaniment for which the Holy Father has repeatedly called. "Discernment" does not mean "go for it." "Accompaniment" does not mean "anything goes." And there is a teleology to canon law: It is meant to serve the salvation of souls, not reduce the kerygma to a Jansenistic talking point.

Okay, I admit it: I did not see this one coming, not any of it. Former President George W. Bush has published an op-ed in The Washington Post about immigration reform. Bush has been admirably quiet in retirement, so an op-ed is rare. He has always been good on immigration reform, but the occasion for the current op-ed is new. Bush is coming out with a new collection of paintings he made, all of them portraits of immigrants. His upbeat understanding of America is not merely the reflection of his undoubted privilege. It is the way most immigrants feel about America. Today's Republican Party has no room for someone with Bush's views on this issue, but there are not many liberal outposts where his enthusiasm for this country is welcome either.

At The Hill, a student loan bill I could support. Republican Sen. Mitt Romney and Democratic Sen. Kyrsten Sinema have introduced legislation that allows states and nonprofits to match a student's savings on an 8-1 ratio. To be eligible, a student must be eligible for a Pell Grant, that is to say, the plan is needs-based. I would encourage Romney and Sinema to expand it so that a young person who is saving to start a small business or go into a trade might also benefit from the program. Still, it is important for the country that we enact some bipartisan bills where possible and this effort would save the Democrats from a catastrophic mistake of supporting wholesale student debt forgiveness.

From Politico, former U.S. Attorney General William Barr and newly minted U.S. Supreme Court Justice Amy Coney Barrett have both secured book deals. Barr is out of office and can do what he wants but surely Barrett's new job demands her full attention. President Joe Biden announced a bipartisan panel to look into reform of the judiciary. Here is an easy change: Proceeds from anything published by a sitting justice revert to the Treasury and are used to pay down the national debt.

At Time magazine, a look at rich people from the states moving to Puerto Rico to take advantage of its tax laws. Becoming a tax haven is no future for the island and the commonwealth's pro-statehood governor should come up with more creative solutions to bolster the economy. Tax havens are the exact opposite of Fratelli Tutti economics: The diminution of the commonwealth to help the already rich who need help the least. Add in the self-satisfied arrogance of American meritocracy and you get something antithetical to the solidarity that has so long characterized Puerto Rican culture.

At The Salt Lake Tribune, Peggy Fletcher Stack on why the newspaper will always cover the religion beat. I wish more local newspapers were so committed to this most fascinating and ever-changing beat. Without granular news stories, the national news will become more and more prone to stereotypes and generalizations. Kudos to Stack and The Tribune.

At La Croix International, Bernard Prusak reviews a new book, Secular Surge: A New Fault Line in American Politics. He warns that the increasing secularity of Democratic Party activists could break the party in two, a concern I share. He also worries about the affect of confessional politics on religion, writing: "The risks to the U.S. Catholic Church, and to U.S. Catholic schools from kindergarten through college, are no less existential. The more the Church becomes associated with right-wing politics, the more Catholics repelled by that politics will vote with their feet."

From Pro Football Talk, a lesson in not rushing to judgment. A man was assaulted outside of a club in Pittsburgh and he originally accused Aaron Donald, who plays for the Los Angeles Rams, of being one of the attackers. Surveillance video shows that Donald tried to push the attackers off the man — and at 6'1", 284 pounds, he was pretty effective. If anybody ever attacks me, I hope Donald is around to help out.

I was only 2 years old when my parents brought me to the 1964 World's Fair at Flushing Meadows so I do not remember it but have pictures attesting to my attendance. I do remember the 1967 World's Fair in Montreal, and revisited the site during the 1976 Olympics when the rowing competition was held on the same islands in the great river that has hosted the fair. A few of the pavilions were still standing. I suspect that the advent of cheap air travel made such fairs less profitable and the idea is virtually defunct. Two articles caught my eye this week about them, however. One, from Architecture Daily, looks at the influence the fairs had on architectural trends. A second, from Treehugger, looks at 15 "leftovers," pavilions or symbols that remain extant. The oldest and most famous is also, undeniably, the most beautiful, the Eiffel Tower in Paris, built for the 1889 fair in Paris.