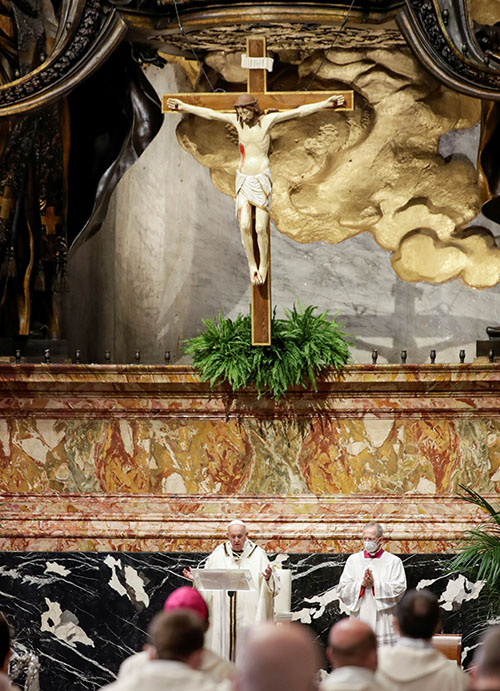 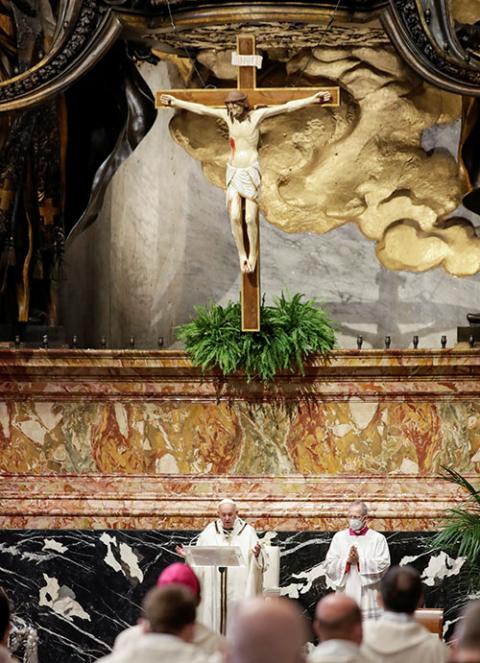 Pope Francis' homily at the chrism Mass on Holy Thursday was one of his finest. After commenting that "the cross is nonnegotiable," the pope said:

There is an aspect of the cross that is an integral part of our human condition, our limits and our frailty. Yet it is also true that something happens on the Cross that does not have to do with our human weakness but is the bite of the serpent, who, seeing the crucified Lord defenseless, bites him in an attempt to poison and undo all his work. A bite that tries to scandalize — and this is an era of scandals — a bite that seeks to disable and render futile and meaningless all service and loving sacrifice for others. It is the venom of the evil one who keeps insisting: Save yourself.

How often do we allow the serpent's bite to cause us to abandon the work, to delude ourselves into thinking we can save ourselves? Be sure to read until the very end when a woman religious gave the future pope a lesson he still remembers vividly.

In The New York Times, good news from the National Labor Relations Board, which determined that two women fired by Amazon were fired illegally. The board ruled that they were terminated because of their efforts to organize a union, which is against the law. Let's hope corporate boardrooms are paying attention. Nothing would do more to revitalize our nation's political health than a resurgence of the labor movement.

Also in The New York Times, a look at how major corporations like Delta and Coca-Cola, both based in Atlanta, are navigating the political headwinds caused by that state's effort to restrict voting rights. There is a bit of hypocrisy on the left, which welcomes their interference now after complaining for years about their political influence. Still, the fact that these corporations are opposing the new law speaks to the law's radical and anti-American nature: Expanding the franchise, not restricting it, used to be a nonpartisan goal. Think of the League of Women Voters registering people to vote at the mall on weekends. Buying into Donald Trump's big lie about election fraud and then enacting laws like Georgia's should worry all citizens, even our corporate citizens. (But I still don't trust them!)

In The Washington Post, Philip Bump looks at the Latino vote in the 2020 election and why Joe Biden underperformed Hillary Clinton in heavily Latino precincts:

Democrats were caught asleep at the wheel while it was Trump who motivated previously inactive Latino voters to turn out for him, not against him. Bump examines some new data from Equis about why that is. I looked at these same issues a few weeks ago in a three-part series here, here and here.

From The First, the monthly online journal of Catholic Theological Ethics in the World Church, Aline Kalbian reflects on COVID-19 and the "everyday ethics and solidarity" found among women religious in the U.S. These women have given their lives to the church and yet, as Kalbian notes, moral theologians usually do not consider their lives and ministry as a kind of theological data. I suspect there is more power in their prayers than in all the arguments of all the canonists and theologians in the world.

From Business Insider, and related to the Times story about how corporations are responding to the Georgia voter restriction law, a couple who refused to wear their masks on an airplane are told by the crew to deplane and the rest of the passengers applaud the crew. Part of building a healthy society entails the stigmatization of harmful behaviors. Kudos to the crew and the other passengers.

Good news for tourists: The BBC reports that Venice has banned cruise ships from docking there. There is concern the large ships, and they have become very large, are undermining the city's foundations. In addition, albeit unmentioned in the article and not of special concern to UNESCO, these huge ships disgorge thousands of people into the narrow streets and canals of the city, making it a place impossible to visit.