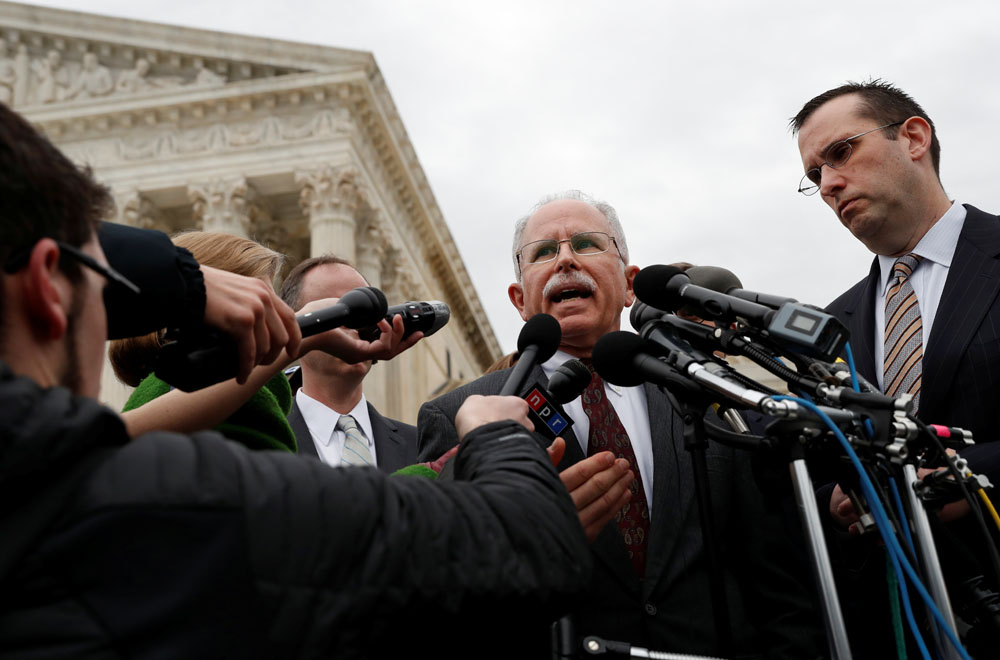 Mark Janus addresses the media outside of the U.S. Supreme Court in Washington Feb. 26. Janus, an Illinois state employee, sued over the union at his workplace making him pay fair-share fees as a nonunion member. He said it was unconstitutional and the high court in a ruling June 27 sided with him in the case, Janus v. AFSCME. (CNS/Leah Millis, Reuters)

Last week, I called attention to an article that documented efforts by Planned Parenthood to fight efforts by its workers to unionize. Indeed, not only does Planned Parenthood engage in the kind of union-busting tactics we have come to expect from corporate America, they are even in cahoots with the Trump administration in trying to stop organizing efforts; they have contracted with a notorious union-busting law firm to help them.

Yet, every few years, the leaders of some unions call for a pan-left alliance in which unions would join forces with groups promoting abortion rights. And, given the odd way our politics has shaped itself these days, there are times when organized labor will find itself on the same side of a fight with groups like NARAL Pro-Choice America.

For example, organized labor is opposing the nomination of Judge Brett Kavanaugh to the U.S. Supreme Court. He has a long record of siding with corporate interests, of interpreting rights in libertarian ways that vitiate labor organizing and in vaulting property rights above all others.  That record is why I would vote against his nomination too. But, those are not the reasons pro-choice groups oppose him. They want to protect the jurisprudence that found a constitutional right to an abortion in the Constitution.

Related: Would Brett Kavanaugh stand up for the rule of law or for Trump?

Among the complaints hurled by anti-union activists like Ed Whelan at the U.S. bishops' conference for filing their brief in support of organized labor in the Janus v. AFSCME case was the fact that Mark Janus' union, the American Federation of State, County and Municipal Employees, or AFSCME, had given money to Planned Parenthood's political arm. Did Whelan bother to find out why? Because Planned Parenthood had the best voter rolls in Wisconsin where conservative Republicans were embarked on enacting right-to-work laws, and AFSCME purchases those lists. Politics makes strange bedfellows.

I am not really surprised, however, to find out that in the conduct of their business, Planned Parenthood is so aggressively anti-worker. The effort to legalize abortion began with a concern for women facing crisis pregnancies, but it has moved beyond any sense of solidarity to a libertarian assertion of autonomous right: "You can't tell me what to do." It is ironic that the Catholic pro-life movement, which initially suffered from a failure to sufficiently consider the plight of the mother, has been moving in recent years to recognize and act upon the need to demonstrate solidarity with both the mother and the child. The pro-choice movement has become merely libertarian.

The problem runs deeper than Planned Parenthood. If you are an NCR reader, chances are you work at, or on the board of, or volunteer with some kind of progressive Catholic organization, or with a diocese or religious order. We all know what Catholic social teaching says about the right-to-organize. Does the organization with which you work, does it have a policy that requires you check at Unite Here's easy-to-use website to make sure you are booking a reservation at a socially responsible, union hotel when you travel? Does your Catholic organization reimburse you for using Uber even though Uber is aggressively anti-union, and is teaming up with the U.S. Chamber of Commerce and the Trump administration to decertify unions that have already won their elections? Does your diocese have a contract labor agreement so that large projects are being done with union labor? If not, why not?

Three years ago, Cardinal Donald Wuerl gave a keynote address at a conference I helped organize at the AFL-CIO headquarters in Washington. The text of his talk can be found here. Among other things, the cardinal recalled as a young priest, he was walking distractedly down the sidewalk when he heard a woman say, "Please, Father." He looked up and realized he was about to cross a picket line!

"Needless to say, I stopped," the cardinal told the conference. " 'Thank you,' she said to me. Growing up it was clear – you don't cross a picket line. The efforts to stand together on behalf of all human development, to be inclusive in our outreach to all people, to demonstrate the commitment to protect the environment and our respect for all human life are the new picket lines of today which we ask all, with us, to respect."

Every time you stay at a hotel that denies its workers their right to join a union, every time you take an Uber rather than a union-driven cab, every time you even think of shopping at Walmart, you are crossing a picket line, disrespecting workers and making Catholic social teaching seem irrelevant. And, sadly, many Catholic activists I know, from people who focus on pro-life issues to those who work on environmental issues, labor rights are an afterthought at best.

This indifference to unions and the good that they do is characteristic of the modern aristocrats, the 9.9 percent that Matthew Stewart wrote about at The Atlantic Monthly and which I analyzed in two columns here and here. To them — to us, really — a worker at Planned Parenthood, like a worker at the hotel, like the cab driver at the airport, they are service workers and they are there to serve us and our convenience. We are the busy ones, right? Who has time to make sure the hotel is union?

What is amazing to me is that while so many so-called progressive Catholics have lost sight of their own best traditions regarding organized labor, labor leaders, including non-Catholics, are rediscovering the value of Catholic social teaching, not just the church as a political ally, but the church qua church as a part of the labor movement. Look at what Damon Silvers, policy director of the AFL-CIO, told John Gehring last year for his excellent article at the American Prospect:

The labor movement needs a larger ecosystem to grow and thrive. A critical part of that ecosystem is the Catholic Church. We have to be embedded in the lives of working people in a multidimensional way and have a connection to the spiritual life of its members. There is a deeper thing here we're trying to do as a movement. People are not simply the sum of their economic parts. Workers are not a commodity. The Church at its best is trying to help people live as something more than a thing. In that sense, the Church and labor need each other because we're engaged in a common project.

A common project. The libertarians in the pro-abortion movement, like the libertarians who spread right-to-work laws and who engineered the Janus case, they do not like the word "common" in any context. But if organized labor ("There is a deeper thing here we're trying to do as a movement") and that most organized of religions, the Catholic Church, can get back on the same page, we can really give the libertarians something to worry about. What an irony that the union-busting activities of Planned Parenthood may help the cause along.