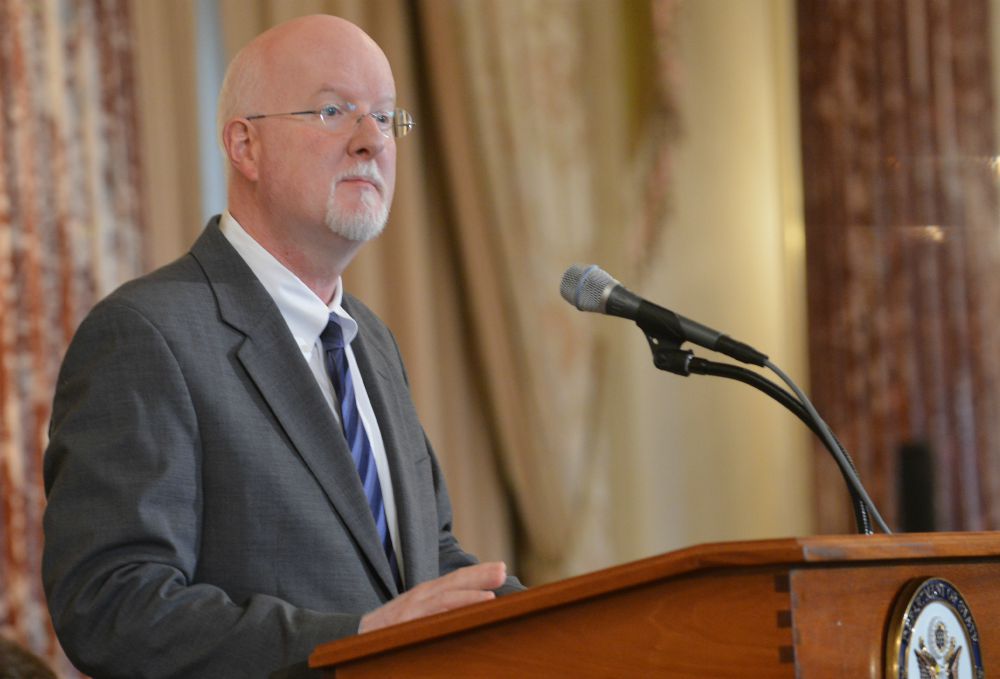 Shaun Casey was the inaugural director of the U.S. State Department's Office of Religion and Global Affairs. He is pictured in a 2013 photo. (CNS /Courtesy State Department)

This week, Shaun Casey, former head of the State Department's Office of Religion and Global Affairs and now director of the Berkley Center for Religion, Peace and World Affairs at Georgetown University, came to the land of steady habits to deliver a talk at the Greenberg Center for the Study of Religion in Public Life at Trinity College. The always entertaining and erudite former diplomat found an eager audience, given the focus of the Greenberg Center's work, but he brought with him a tale of woe.

Casey was the founding director of the Office of Religion and Global Affairs at the State Department. His official title was Special Representative. The office had been authorized previously, and, curiously, Secretary of State Hillary Clinton did not act on it. Only when Sen. John Kerry became the nation's top diplomat did he activate the office and select Casey to lead it, in August 2013.

The need for an office that analyzes the role of religion in the world of diplomacy and seeks to forge connections with religious leaders around the world would seem pretty obvious. As Casey explained, when Dick Cheney said American troops entering Iraq would be greeted as liberators by Sunni and Shiite alike, he betrayed a woeful ignorance of the religious politics of the country.

That ignorance was not ameliorated anytime soon. The U.S. imposed a secular government on Iraq as soon as we could, not only misunderstanding their history but ours: Casey pointed out that the West went from the wars of religion to religious toleration to our modern understanding of church-state separation over the course of a couple centuries. We expected the Iraqis to leap into disestablishmentarianism in a year. The geniuses advising Cheney seemed not to know about Iraq's history of toleration for religious minorities. I wonder why that didn't work out? Nor did it help that the people designated to reach out to Iraqi religious leaders by the occupying U.S. forces were U.S. military chaplains, who tended to have crosses on their uniforms and had little training in diplomacy or the history of Islam or Iraq.

Now, the Trump administration has dismantled Casey's old office and appears ready to make similar bone-headed mistakes. Casey noted that Mike Pence has championed the policy of delivering aid to Iraq via religious non-governmental organizations, rather than through the U.N. Evangelical Christians, the one religious group that shapes the world view and policies of the current administration, have long had a suspicion of the U.N. But, Casey pointed out, the Archbishop of Erbil knows it imperils his position, it does not strengthen it, if the local Sunni and Shiite imams need to come to him to get aid.

Casey did not hide his concerns about how President Donald Trump is handling diplomacy. He cited Trump's first trip abroad as president, when he went to Saudi Arabia, Israel and Rome. In Saudi Arabia, he essentially told the government that the U.S. was not going to tell them how to run their country. But part of the job of U.S. diplomats is to promote religious freedom around the globe, and the Saudis have been among the worst abusers of that freedom. Now, when the diplomats ask for progress, the Saudi officials can simply roll the tape of Trump's remarks.

The office Casey once headed has been eliminated. Two positions that conducted outreach to the Muslim world have been eliminated: Even if Trump hates Islam, you would think his Secretary of State could make the case that American diplomats need to understand Islam. The office that monitors anti-Semitism has been moved to another division where it will have a harder time being heard and affecting policy, this at a time when not only the number of anti-Semitic incidents is on the rise but the character is changing, as they are more public and more violent.

While there are 65 million displaced persons throughout the world, the Trump administration has made the U.S. indifferent to their fate. That said, Casey explained one way in which populist, xenophobic politics cannot speak for the people of the U.S. He told of speaking with refugee policy analysts and leaders of religious organizations that help refugees assimilate upon arrival. They said that every time an anti-immigrant and anti-refugee comment came out of the mouth of some high official in government, they would get a call from local religious communities asking how they could help resettle the refugees.

Casey worried, as well, that in this administration the only religious group with any influence is the white evangelical community, which has its own, often quirky, approach to public policy issues. For Casey, dealing with the eccentricities of biblical fundamentalism is nothing new. He spoke about growing up in a small town in southeast Missouri. The local Church of Christ had a small sanctuary and they decided to build a fellowship hall so that the community could come together for a meal. The church modeled itself after the pattern of early Christian life as recorded in the Scriptures, and when the architects came with their plans for the hall, a theological struggle broke out: The architect had included a kitchen, but the New Testament makes no mention of a kitchen. Some, including Casey's mother, pointed out that the sanctuary had a men's room and a ladies' room and that they, too, were not mentioned in the Good Book. The congregation split in two, and the division remains to this day.

Casey is now the director of the Berkley Center at Georgetown, and I am glad there is such a calm, well-versed expert on the estuary where religion and politics intersect within easy reach of whatever sane people are left in Washington. I hope the Democrats call on him to discuss not only the role of religion in diplomacy, but also the way religion affects domestic politics too. He came to Kerry's attention because of his research on this latter issue after Kerry's mishandling of religion in his 2004 presidential bid may have cost him the race. By comparison to some leading the party today, Kerry was a genius at handling religion. I have a message for Democratic National Committee Chair Tom Perez: Call Shaun Casey and, to invoke the words of the Blessed Mother at Cana, do whatever he tells you.