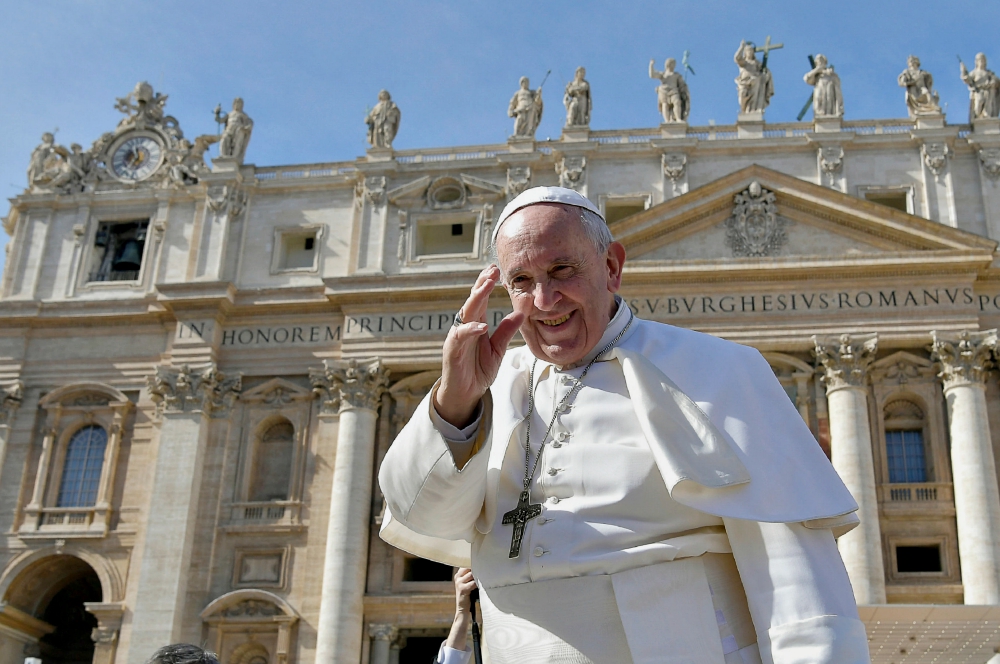 It was the early afternoon Eastern time when the smoke started to billow from the chimney atop the Sistine Chapel. At first, it was hard to tell if it was white or not, but as the camera stayed trained on it, and the TV anchors debated its color, the smoke grew whiter and whiter, and then the bells of St. Peter's Basilica began to ring. Habemus papam.

It has been six years to the day since the cardinals elected Jorge Mario Bergoglio as pope, and Cardinal Jean-Louis Tauran, the senior cardinal deacon, announced: Qui sibi nomen imposuit Franciscum.

The new pope emerged on the loggia wearing a simple white cassock and greeted the people gathered in the square below with the simple words of greeting: "Buona sera." The choice of name indicated a concern for the poor, and the simplicity of his manner suggested a less exalted or, at any rate, a less fancy papacy.

Unlike his concern for the poor and a more simple papal style that were immediately apparent, something not discernible that first night turned out to be foundational: Pope Francis has retrieved a sense of synodality that had been obscured, but never eliminated, after almost two centuries of Ultramontanist ecclesiology. As Jesuit Fr. Antonio Spadaro, one of the Holy Father's closest confidants, wrote earlier this week:

First of all, the Pontiff has given the Church a synodal "rhythm" through which in six years three synods (on family and on youth) were celebrated, a synodal encounter (on the protection of minors) was held and the Synod on the Amazon is in preparation. The latter will have — as is already well understood now — a universal value, certainly not just regional. Reform is not the gesture of an isolated Don Quixote, but is the fruit of a long process of involvement for the Church.

It is hard to overstate how significant this change is: Throughout the post-conciliar era, there has been a tug of war between those who wished to pursue new avenues opened by the Second Vatican Council and those who wanted to restrain any new pursuits, and as time went on, the forces of retrenchment appeared to be winning. Nowhere was this more evident than in the long years of St. Pope John Paul II in which synods of bishops became meaningless.

Clinging to a rigidly hierarchical conception of the church in which the pope reigned supreme and bishops were mere branch managers, the conciliar vision was effectively suppressed. The questionnaire sent out to vet candidates for the episcopacy reflected this vision, heavy on adherence to church teaching on neuralgic issues, light on pastoral experience.

A generation of largely infantilized bishops was created, incapable of acting on their own initiative, relying on Roman congregations for decision-making that could really only be made at the local level. The vision of Lumen Gentium receded and few bishops could lead their flocks, so busy were they quoting "John Paul the Great."

That was the experience of the church in the United States and in large parts of Western Europe. But the experience in Latin America was different. There, a more dialogical approach was brought to bear, ministry was rooted more in reaching out to the millions at the margins and less on propping up a decaying infrastructure, and, at least in Argentina, a theology of the people emerged that did not have the academic abstractions that too often characterized the work of both the traditional Neo-Scholastic theologians and the more ideological among the liberation theologians. Francis also has brought the synodal experience of CELAM, the continent-wide meetings of Latin American bishops' conferences, to the universal church.

Synodality is about more than structures. It is about listening to each other. Synodality requires that we do not seek to "win" an argument about what the church should do, so much as we, together, seek the Spirit's promptings and move forward together, always together.

In 1968, Pope Paul VI worried that lifting the absolute ban on artificial birth control would undermine papal authority. For millions of Catholics, his decision to reaffirm the ban had the opposite effect. Francis recognizes that appeals to papal authority are no longer enough and, in any event, reflect a distorted ecclesiology, one in which not just the Curia, but all bishops lived in the atmosphere of a princely court. It is the authority of the church, as a whole, that synodality seeks to strengthen. 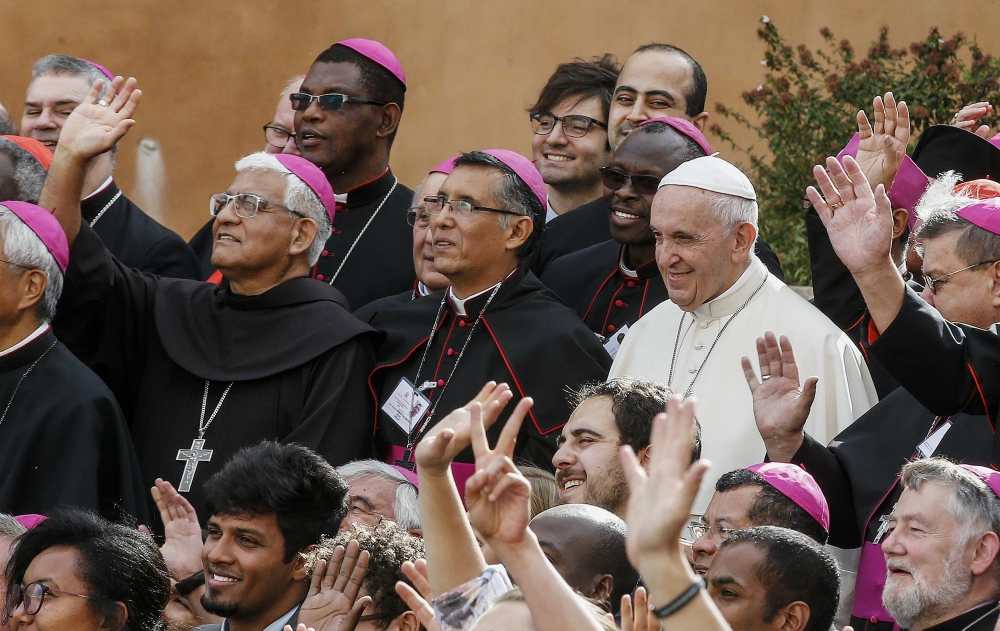 Pope Francis poses for a group photo with bishops and participants at the Synod of Bishops on young people at the Vatican Oct. 27, 2018. (CNS/EPA/Fabio Frustaci)

The pope invites us to a different way of being a Christian church in which the new evangelization is no longer tied up with technological, still less managerial, questions, as too often happened here in the U.S. under John Paul II and Benedict XVI, as if learning to use Twitter was the heart of the matter. Under Francis, the new evangelization means leaving our sacristies and getting our hands dirty in the streets. It is about getting back to basics, and nothing is more basic that seeking Jesus where he can always be found, among the poor.

I have said it before but will say it again: The Catholic Church in this country was in danger of becoming an upper-class club for people with conservative politics and conservative sexual ethics. The influx of Latino immigrants has combined with the leadership of Francis to make that danger far more remote.

This synodal approach has frustrated not only some conservative cardinals. Some liberal Catholics are frustrated too. They want change and they want it now. They know the outcomes they seek and want to see Francis embrace them and ratify them for the universal church.

Besides — and here is the real rub — I believe Francis is more concerned about how we follow Christ than he is with any particular outcome, still less agenda. He worries that if we are too programmatic, we will only succeed in enacting our own desires. Francis leaves the determination of outcomes to the Lord.

Nowhere was this pope's willingness to leave room for God to act more obvious than in the silence he kept after the ugly and insidious denunciation of his leadership leveled by Archbishop Carlo Maria Viganò last August. No PR specialist would have counseled silence. Twitter and other venues for commentary were rife with speculations and suspicions, all of them implying Francis' guilt or stupidity, as to why the pope would not respond.

Yet, on a first reading of Viganò's screed, Francis knew that there were as many falsehoods in that text as not, and in the days and weeks that followed, others reached the same conclusion. In such an unprecedented moment, Francis did not turn to his own resources but let the truth manifest itself.

In that same article cited above, Spadaro writes, "Francis is at this point as well the only global leader who can give a message of hope to humanity. And in this regard, documents like the encyclical Laudato sì have led the church on a collision course against those powers that are imprinting a nationalistic, populist and fundamentalist direction on the political dynamics of our world."

The observation about being on a collision course is certainly accurate, even if EWTN and other conservative Catholic venues are shy about admitting it as they continue to defend Trump whenever possible.

And it is a sign of how corrupted politics have become — in the West, in the developing world, in China — that the claim to be "the only global leader" has a ring of truth. But I suspect Francis would not agree. The church is filled with men and women who are evangelical mustard seeds. We lost four of them this week, Catholic Relief Service workers downed in the tragic plane crash in Ethiopia. Wherever you find a religious sister, you will find the Gospel's mustard seed growing. I can think of many bishops who are not servile but have their mustardy moments, too.

In the church, Francis sees, the real leaders may not be in Rome, they are out at the margins and they are many. 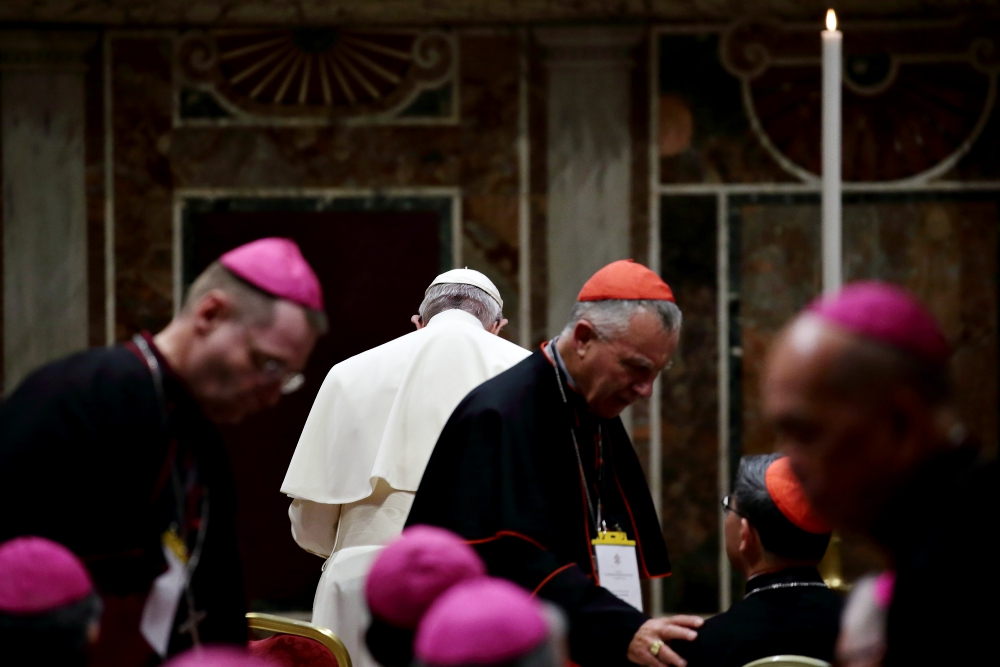 Pope Francis, cardinals and bishops attend a penitential liturgy during a meeting on the protection of minors in the church at the Vatican Feb. 23. (CNS/Evandro Inetti, pool)

The sixth year may go down as the most decisive in Francis' papacy. His decision to convoke a meeting of all the presidents of the world's episcopal conferences not only was an unprecedented, and overdue, response to the sex abuse crisis, but he did not predetermine the outcome. He insisted the bishops take ownership of the problem, and not simply revert to Rome for leadership, or its lack.

Yes, that means there were no immediate "solutions" to the crisis, but life does not offer such solutions except as false dreams. Synodality is about much more than simply a different mode of decision-making. It is about putting childish ways aside and becoming adult Christian disciples. It carries forward the vision and the ecclesiology of Vatican II and, more importantly, of the Gospels.

The clergy sex abuse mess has become a threshold issue for many Christians: If we can't get it right at long last, why stay? I think Francis continued to show his trust in the Lord's work among us all in this hour, and it is that work, not some management theories or accountability seminars, that will make any procedural and legal reforms real and lasting and life-giving.

This year, even more than in the previous five, Francis showed that it is not he who will enact reforms in our church. They will either emerge from the Spirit's bidding or not, and perhaps our role is first to get out of the way with all of our plans and our agendas.

The night of his election, I had the sense that this papacy was going to be different and a verse from Isaiah came to mind: "Behold, I am doing a new thing; now it springs forth; do you not perceive it?" This last year, I perceived it more deeply than before.

A version of this story appeared in the April 5-18, 2019 print issue under the headline: Sixth year may go down as the most decisive in Francis’ papacy.