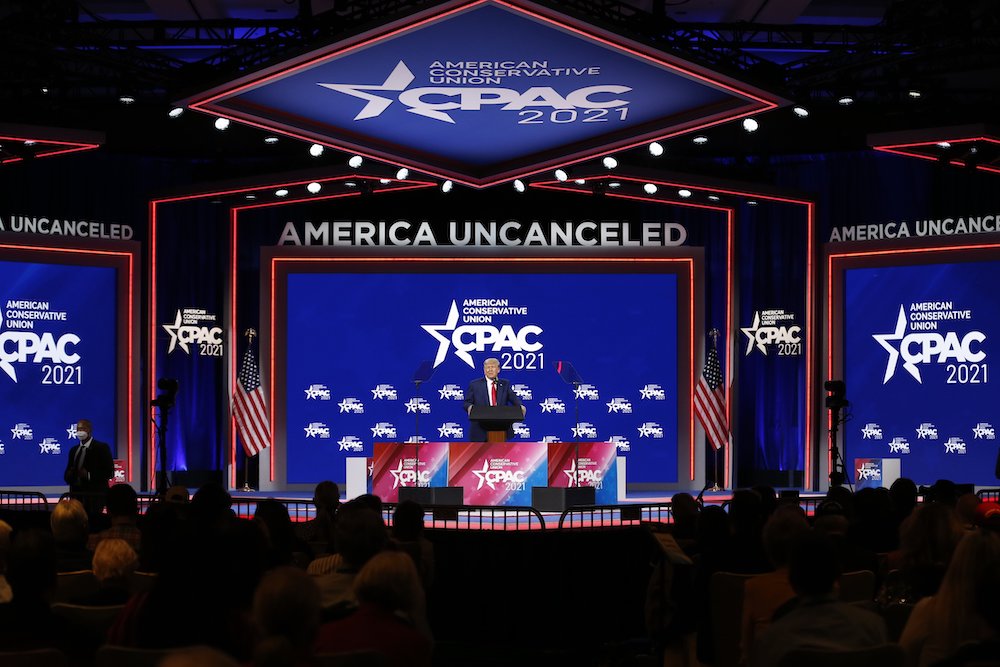 Former President Donald Trump headlined the Conservative Political Action Conference meeting in Orlando last weekend. He wrestled the truth into submission, and with it, any opposition from fellow Republicans, demonstrating once and for all that conservatism today stands for no ideas, no values, only for him. The Republican Party is Trump's, he knows it, and the assembled conservative activists seemed content to set mind and morals aside and embrace a vision centered only around celebrating the man from Mar-a-Lago. Like the ancient Israelites with their golden calf, Trump's supporters even crafted a golden image of him.

Trump was not two minutes into his speech when, apropos of nothing, he asserted, "We've been doing a lot of winning." Has he forgotten he no longer lives in the White House? Did the audience forget that the GOP lost two Senate seats in a special election in Georgia? Later in the speech, he would remind the audience that he received more votes than any incumbent president, which is true but meaningless because, while he reminded the audience that he motivated 74 million Americans to vote for him, 12 million more than did so in 2016, he neglected to mention that he also motivated a record 81 million people to come out and vote against him.

In that same second minute of his speech, Trump made clear that the GOP is committed to a culture war. He told the CPAC crowd that they were in an "historic struggle for America's future, America's culture, and America's institutions, borders and most cherished principles."

Ronald Reagan advocated for a laissez-faire economic policy to help achieve the promise of a better future for Americans. That policy was, as George H.W. Bush rightly dubbed it, "voodoo economics," but at least it was a policy. Reagan pursued a similarly flawed foreign policy, but it too was rooted in ideas. Trump is the ultimate identity politician: For him, the only thing that matters is that he be in power. Policy and ideas are like secondhand clothes, easily donned and easily set aside.

There were other lies peddled along the way. Speaking of the supposed border wall, Trump said the "wall has been amazing." How so? Because Mexico never paid a peso for its construction or because, in four years, so little of it was actually constructed? It was a grim irony to hear him say, "We have to stand tall for law abiding Americans," apparently forgetting the lawless mob carrying Trump flags that stormed the U.S. Capitol on Jan. 6. He rightly claimed some of the credit for the rapid development of COVID vaccines [24:30] but he had to take a dig at the Food and Drug Administration, which should actually be credited with the expedited process as much as any politician.

Trump doubled down completely on his allegations of election fraud — "Ballots are indiscriminately pouring in from all over the country, tens of millions of ballots," and, "Illegal aliens and dead people are voting" — and that he really would have won but for nefarious tampering with election law: "This election was rigged."

One wonders when — and if — his sore loser routine will wear thin? Perhaps it is already is for some. Still, according to a poll of CPAC participants, 68% said they would like Trump to run again.* It was chilling that the crowd welcomed him and interrupted him with chants of "USA! USA!" as if it is possible to conflate the country with the man. This is politics, for Pete's sake, not the Olympics, and Trump is not the 1980 U.S. hockey team.

Trump made it clear that if he has his way, only those who swear fealty to him have a place in the GOP's future. He called out, by name, all 10 Republican members of Congress who voted for his impeachment and all seven Senators who voted for his conviction. The crowd booed on cue. He criticized RINOs — "Republicans in Name Only" — and "establishment Republicans," although he did not mention Sen. Mitch McConnell by name. McConnell, recall, voted "not guilty" on impeachment but then said that Trump had been morally responsible for the attack on the Capitol. He subsequently said he would support Trump if he were the GOP nominee in 2024. This head-spinning makes most people dizzy, but not the Donald. He wants McConnell and every Republican to know that he not only expects them to kiss his ring, he expects them to French kiss his ring.

It is hard not to simultaneously admire and fear Trump's creepy ability to hold a crowd in the palm of his hand for an hour and a half. The next generation of Republicans who addressed CPAC utterly lack it. Sen. Tom Cotton did his best to mock liberals, but he came across as didactic and stiff. It is quite an accomplishment to be boring when you are advocating sending in the U.S. military to stop protests on the streets of our cities. Like Trump, he celebrated the police — "Conservatives should never apologize for backing the blue" — forgetting the mob that killed one police officer on Jan. 6 and wounded several others.

Sen. Ted Cruz tried humor: "Orlando is awesome," he began. "It's not as nice as Cancun, but it's nice." The rest of his speech seemed as off-pitch as his decision to flee Texas for the Mexican Riviera: He said we are living in "dark times" when, in fact, more people are getting vaccinated than had been predicted, spring is in the air, and soon those COVID relief checks will be in the mail. It is hard to imagine him inheriting Trump's mantle, but it was hard to imagine any of the presenters doing so. They may traffic in the same themes of resentment of the elites that he does, but they do not bring the conviction to it that oozes from Trump's every pore.

Trump really hates the elites. The others seem to be pretending. And it shows.

Once upon a time, conservatives stood for ideas and values that mattered and so did the Republican Party that gave them a political home. For example, in recent years, at least since the Obama presidency, our conservative Catholic friends have been keen to champion the rights of conscience. They have done so at a time when too many liberals have abandoned their birthright as guardians of the rights of conscience. Even if I have thought our conservative friends at times were excessive or worse in their claims, at least conscience is a principle worth fighting for.

Then along came Trump. He does not, as Obama did, confront conservatives with a challenge to conscience on this point of policy or that. They are expected to abandon it altogether if it conflicts with fealty to their liege lord. The proceedings in Orlando last weekend would be sad if they were not so frightening. What has happened to conservatism and to the once great party of Lincoln? And how will we, as a culture, retrieve the parts of conservatism that balance the whole?

* This article has been updated to reflect the percentage of people polle at CPAC who would like Donald Trump to run for president again.