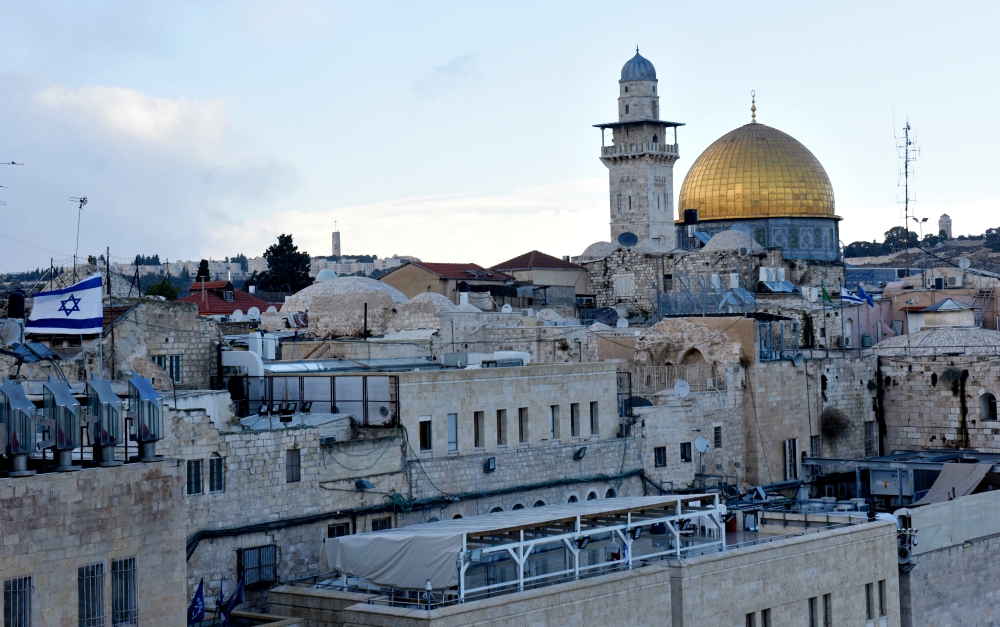 The gold-covered Dome of the Rock at the Temple Mount complex is seen in this overview of Jerusalem's Old City Dec. 6. (CNS/Debbie Hill)

The hyperventilation over President Donald Trump's decision to recognize Jerusalem as the capital of Israel was remarkable, not least because Trump, like his predecessors, then signed a six-month waiver from a law passed in 1995 that required the United States to move its embassy to Jerusalem. So, in the end, not much had changed except this: The suggestion that Jerusalem is not the capital of Israel was exposed as a fiction.

German Foreign Minister Sigmar Gabriel said, "We all know the far-reaching impact this move would have." Really? I am not part of that "we" because I am not at all sure what impact this will have.

The Saudis denounced the president's decision. "Any announcement prior to a final settlement would have a detrimental impact on the peace process and would heighten tensions in the region," Prince Khalid bin Salman, Saudi ambassador to the U.S., told CNN. One is tempted to defer to Saudi expertise about tensions in the region: Their war in neighboring Yemen has done more to destabilize the region than anything Trump has done.

The Swedish foreign minister, Margot Wallström, was the most apocalyptic: "It's catastrophic" she pronounced. How it is such a catastrophe, she did not explain.

To be clear, there is a criticism to be made of Trump's decision, but it is not the criticism being lobbed by the diplomats. I am all for diplomacy. And sometimes a useful fiction must be employed to make diplomacy work.

For example, in the negotiations to end the War of the Spanish Succession in the early 18th century, the allies had to deal with the fact that the Spanish people had embraced the Bourbon claimant, Philip V, and rejected the Hapsburg heir, Charles , yet the British government was pledged to the policy "No peace without Spain." The French wanted peace and Louis XIV promised to exert pressure on Philip to abandon Spain: That was a useful fiction. In fact, Louis was powerless to force Philip out of Spain.

The fiction didn't work, in the event, because the allies wanted a guarantee, and the negotiations broke down. A few years later, the fiction was adopted without the guarantees, the war ended, and a Bourbon still reigns in Spain today.

The idea that Jerusalem is not the capital of Israel is another useful fiction. If you grab a cab at Ben Gurion Airport, and tell the driver you want to go to the capital, he will make a left and head south toward Jerusalem, not northwest toward Tel Aviv. The Knesset, Israel's parliament, as well as the official residence of the president of Israel, are both in Jerusalem.

The reason for the fiction is that East Jerusalem is claimed as the future capital of the future Palestinian state. Its usefulness lies in the fact that diplomats can convince themselves they are making progress by putting off such an intractable problem until the end of negotiations.

When Israel won the 1967 Six-Day War, and took possession of the whole of Jerusalem, East Jerusalem was not the capital of the Palestinian state because there was no Palestinian state. The Arab states support the Palestinian claim to Jerusalem with their voices but they have their fingers crossed behind their back. The last thing Jordan wants is a militarized Palestinian state on its border: The Hashemite leaders of Jordan had to expel Yasir Arafat and his Palestinian Liberation Organization once, in 1970, and they would not relish the prospect of having to do so again. But they would do so if they had to. 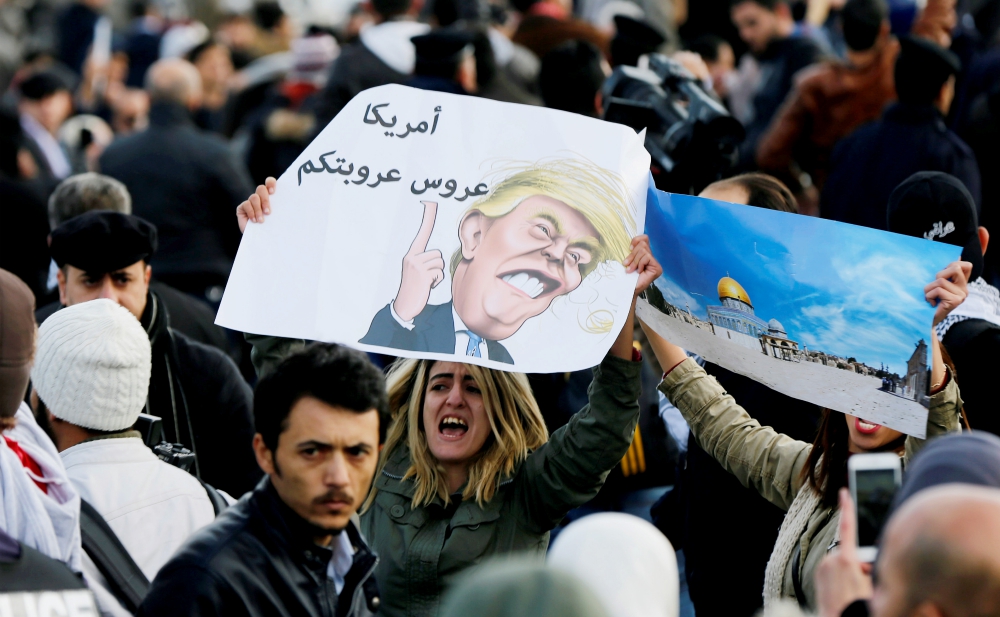 A protester near the U.S. embassy in Amman, Jordan, holds a lampoon of President Donald Trump Dec. 7. The cartoon reads, "America is the Arab leader." (CNS/Reuters/Mohamad Hamed)

We are told that Trump's decision will be destabilizing, but who can realistically suggest that the political culture of Palestine today would result in a successful and peaceful state if Israel gave back half of Jerusalem tomorrow? When Israel withdrew from Gaza, did peace come? Can you describe the brutal rule of Hamas as peace?

Perhaps as a result of Trump's decision, the Palestinian Authority will begin providing military pensions to the families of terrorists. Oh, wait. It already does that.

Will the "Arab street" rise up? Perhaps, but does anyone think we should give the Arab street a heckler's veto over U.S. foreign policy?

In the end, the authoritarian rulers of most Arab countries will suppress their own protesters if things get out of hand. And no one except a few academics still subscribe to the bizarre claims of the late Edward Said that Islamic militancy would help bring about democracy in the region.

The Democrats certainly could not complain about what the president did. They have called for the relocation of the U.S. embassy to Israel in each of the last four party platforms adopted at their national convention. Most members of Congress, Democrat and Republican alike, were enthusiastic or quiet about the president's announcement.

All of that said, the reason Trump's decision worries me is that it was not undertaken with a view toward advancing peace in the Mideast or even making Israel more secure. This decision was taken because a group of evangelical Christians has theories about the end times that require all Jews to be gathered in Israel so that Jesus can return in glory.

As I explained in my book God's Right Hand, the Rev. Jerry Falwell and other evangelical pastors became firmly committed to the state of Israel as a result of their beliefs about how the apocalypse will play out.

This had the happy consequence of allowing Falwell and others to remove the cancer of anti-Semitism from the American right. It had the unhappy consequence of making American foreign policy beholden to a loony theological idea. And it produced the hypocrisy that Falwell and his colleagues were simultaneously condemning any government program in the U.S. as socialism, even while they celebrated Israel, which was founded by socialists.

According to a 2013 Pew survey, 82 percent of white evangelicals believe that God gave Israel to the Jewish people. Ironically, this belief is held by only 40 percent of American Jews.

Trump knows his base. I don't think he cares one way or another about the apocalypse or about the Mideast. He cares about his poll numbers and his image. Now, a crackpot theological idea has been fortified by the president's desire to appear like a tough leader, and we have a decision that, while not catastrophic, is probably not very helpful.

Once the hyperventilating stops, maybe the world's diplomats can address the real impediments to Mideast peace: the existence of too many Israeli settlements on the West Bank in lands not even contiguous with the pre-1967 border; the lack of a political culture among the Palestinians that is committed to peace with Israel; the usefulness of Palestinian grievances to Arab potentates wishing to redirect their people's hatreds away from themselves.

These are the riddles that must be overcome, and in trying to solve them, it won't matter one way or the other where the U.S. embassy is.