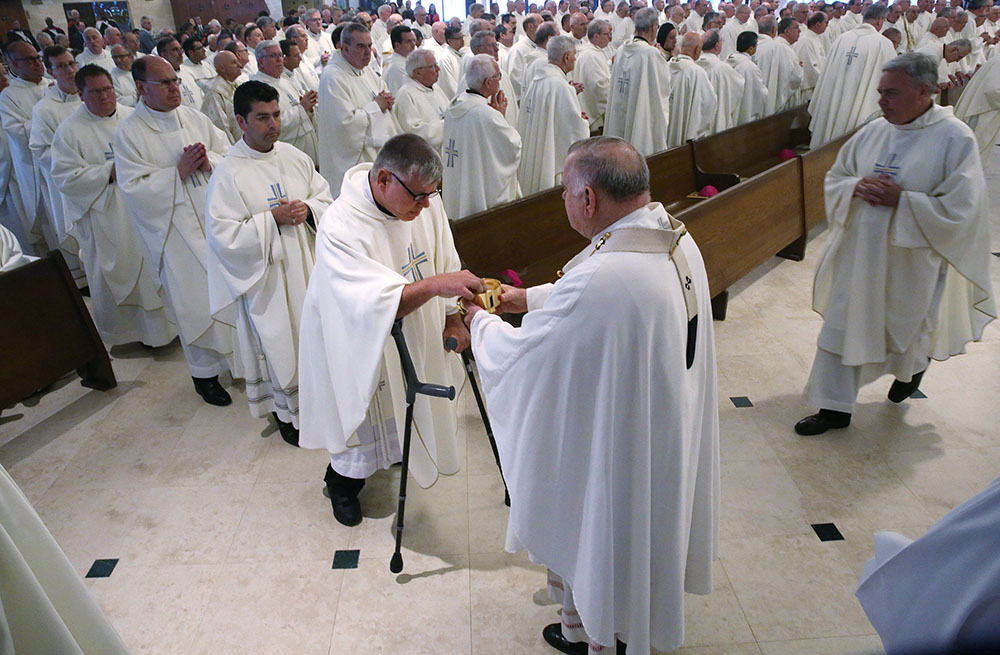 After a week of headlines stating the U.S. bishops were set on denying Communion to the most prominent Catholic in the country, President Joe Biden, the U.S. Conference of Catholic Bishops issued a "Q&A on the U.S. Bishops' Vote to Draft a Document on the Meaning of the Eucharist in the Life of the Church" last week. The four questions with clarifying answers were necessary, apparently, because the bishops themselves kept saying contradictory things during their meeting June 16-18.

The document is a tad disingenuous at times, employing a tactic similar to the age-old one of announcing a change in the teaching of the church with the words, "As the Church has always taught ..." In response to the question "Why are the bishops doing this now?", the document states:

For some time now, a major concern of the bishops has been the declining belief and understanding of the Eucharist among the Catholic faithful. This was a deep enough concern, that the theme of the bishops' strategic plan for 2021-2024 is Created Anew by the Body and Blood of Christ: Source of Our Healing and Hope. This important document on the Eucharist will serve as a foundation for the multi-year Eucharistic Revival Project, a major national effort to reignite Eucharistic faith in our country. It was clear from the intensity and passion expressed in the individual interventions made by the bishops during last week's meeting that each bishop deeply loves the Eucharist.

They evidently forgot that their "working group," formed to deal with the "problems" associated with the election of a pro-choice Catholic to the nation's highest office, recommended that the doctrinal committee draft a document on "eucharistic coherence" in January, and it was that recommendation that got the ball rolling.

So, why all the fuss? Could it be that during the spring meeting several bishops, including a committee chair, Archbishop Joseph Naumann, specifically referenced politicians and Biden during their interventions?

The problem bishops' conference president Archbishop José Gomez and Doctrine Committee chair Bishop Kevin Rhoades have set for themselves is obvious: They need to produce a text that will satisfy the vast majority of the bishops and comply with instructions from Rome not to single out politicians, and they need to do this while not angering the pro-life base that wants Biden denied Communion nationwide. Their situation is, ironically, akin to that of Biden, who wants to unify the country and needs bipartisan cooperation to do so, but must be cognizant of the demands of his progressive base.

So when the bishops issued this clarification, I wondered if the pro-life base would attack?

Church Militant's Christine Niles included a short segment titled "Bishops Slammed for Hypocrisy," in which she cited a few online criticisms from pro-life activists. They voiced "their dismay" that the bishops may be backing off their original plan to focus the document on denying Communion to Biden. Niles then moved on to a lengthier discussion of the "fraudulent 2020 election."

At LifeSiteNews and at the website for the Lepanto Institute, I found nothing about the bishops' conference Q-and-A.

Was this going to be a 21st-century version of the 1892 Sherlock Holmes short story "Silver Blaze," in which the key to solving the mystery was the dog that didn't bark? Were the leaders of the bishops' conference publicly signaling moderation while giving private assurances to the zealots?

Then the dog barked.

On his weekly EWTN show, "The World Over," Raymond Arroyo hosted his "papal posse" and they were clear that they were not interested in any nonconfrontational document on the Eucharist of the kind outlined in the bishops' conference Q-and-A.

Robert Royal, editor of The Catholic Thing, said, "We've never had a chief executive of the United States being a professed Catholic but at the same time doing so many things that are anti-Catholic."

He said we were at an "American Catholic Rubicon" and failure to take on Biden would result in the bishops losing all credibility.

"The proof is going to be in the pudding because mere words are not going to stop this horrible situation, this horrible, unprecedented situation that we find ourselves in," he added.

Fr. Gerald Murray recounted the short history of the document, that it grew out of a specific recommendation of the working group dealing with Biden, and made clear that he thought the bishops could not now step back from the fight.

"If they do nothing, if they produce a document that could have been produced before this whole thing started, and says nothing special about it, then it really will be a defeat for the church."

My fear is not that the eventual document will adopt this lousy EWTN theology hook, line and sinker. Rome will not permit it. My worry, as mentioned in a previous column, is that the bishops will do what they did with "Faithful Citizenship": find language that appears anodyne but that allows for the kind of hyperpartisan interpretation the pro-life crowd placed on the adjective "preeminent." For all intents and purposes, "preeminent" was rendered as "determinative" at EWTN and other conservative Catholic media. These conservative media and pro-life groups would then criticize Cardinal Wilton Gregory and others, as they already are doing, but will perceive that this forthcoming document agrees with their stance.

In short, if the bishops give so much as an inch to the zealots, the divisions will continue. The harm to the church will continue. The Manichaean fantasy of a "smaller, purer church" will become a self-fulfilling prophecy. Sectarianism and schism are where this path leads. It is a frightening prospect.