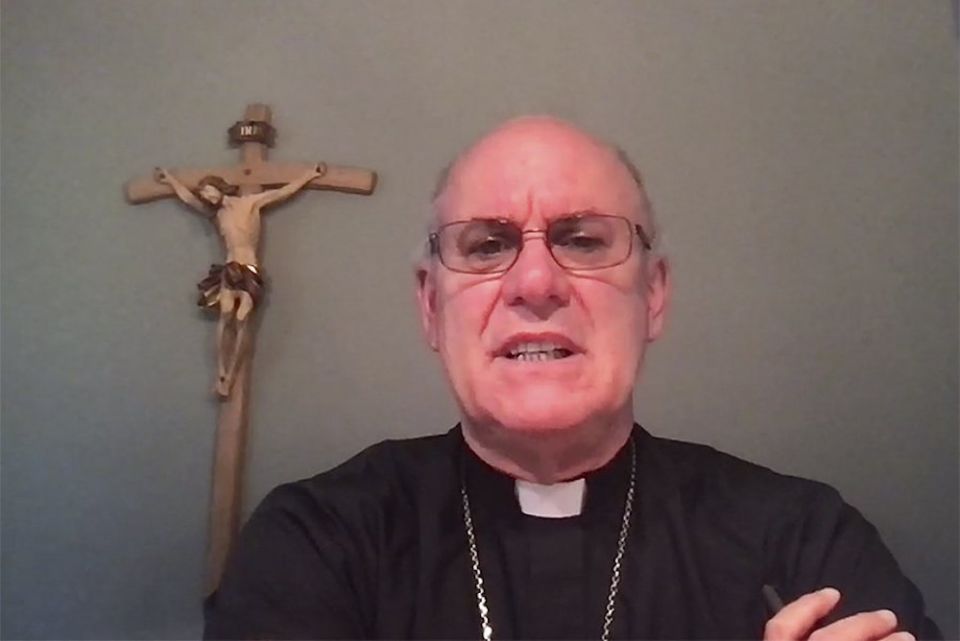 If there was any question that the U.S. bishops' conference is drowning in bad blood and failed leadership, the answer came early in this week's spring meeting. After a routine motion to adopt the agenda, St. Louis Archbishop Mitchell Rozanski asked that enough time be allotted so that any bishop who wished to speak about drafting a document on the Eucharist be given the chance to do so. This issue, so obviously fraught, warranted such a discussion, especially because this meeting is virtual, not in-person, the archbishop said.

The response was a shocking breach of episcopal protocol. Kansas City, Kansas Archbishop Joseph Naumann, one of the architects of the "no communion for Joe Biden" push, questioned Rozanski's motives, suggesting his proposal was a "delaying tactic." Archbishop Paul Coakley of Oklahoma City, who serves as the "ecclesiastical advisor" to the rightwing Napa Institute, did the same, calling Rozanski's request for adequate discussion time a "filibuster."

There was a time not so long ago when Bishop Fabian Bruskewitz of Lincoln, Nebraska, would challenge the motives of one of his brother bishops. I do not recall the issue, but I do recall Bishop William Skylstad, then the president of the U.S. bishops' conference, cutting Bruskewitz off and instructing him that, in this assembly, the questioning of a brother bishops' motives was not going to be tolerated and that Bruskewitz should confine his remarks to the issues. In short, Skylstad showed leadership.

Alas, this week, Los Angeles Archbishop José Gomez is in the chair serving as president of the bishops' conference, and if you look to Gomez for leadership, you are going to be severely disappointed. When he was named to Los Angeles in 2010, I held out hope that his pastoral instincts would triumph over the culture warrior attitudes of some of his colleagues. I was wrong.

Gomez has led the bishops to this point. His inability to stand up to the bullies in the conference has crippled it. Now, this man who once said, "There are no single-issue saints," has allowed the conference to descend into a functional schism.

Consequently, when Gomez used his presidential address to tell his confreres, "It seems to me that in these times when society is so divided, the church has a great duty to more fully reflect the unity that God wants for his creation and his people," the question arose: Is he being disingenuous?

In an organization, unity is more than a word. It takes work, hard work, the work of dialogue. Sadly, as the debate that followed on June 17 showed, dialogue was not to be had. Gomez had thrown in with one side in the dispute, and that side was determined to press ahead at all costs. The cost is disunity.

The debate on Thursday began with Bishop Kevin Rhoades of Fort Wayne-South Bend, Indiana, chairman of the Committee on Doctrine, discussing the reasons for wanting to draft a document on the Eucharist, but he neglected to mention that the idea had a very specific genesis: The "working group" set up to deal with Biden recommended such a document.

This failure to acknowledge the reason the group was discussing the issue now rendered suspect his subsequent claim that the committee never, ever intended to single out anyone in particular. He assured us that the faith, not politics, was the motivating factor behind the effort to draft this document and to do it now.

Rhoades spoke about the many chances the bishops would have to amend the document, which is true. What he neglected to mention is that once the document is prepared, it becomes the baseline for subsequent discussion. In 2019, the drafting committee added the adjective "preeminent" to the bishops' voting guide so that removing it was portrayed as sending the signal that the bishops were retreating on their commitment to the pro-life cause. And, once ratified, "preeminent" became "determinative" for many Catholics who suggested somehow that our faith required us to overlook all the many moral and political failings of President Donald Trump and vote for him for the simple reason that he appointed justices determined to overturn Roe v. Wade. The same bishops who pushed "preeminent" in 2019 are pushing for this document now, and you can be sure it will find some way to recommend that bishops deny communion to politicians who support abortion rights. 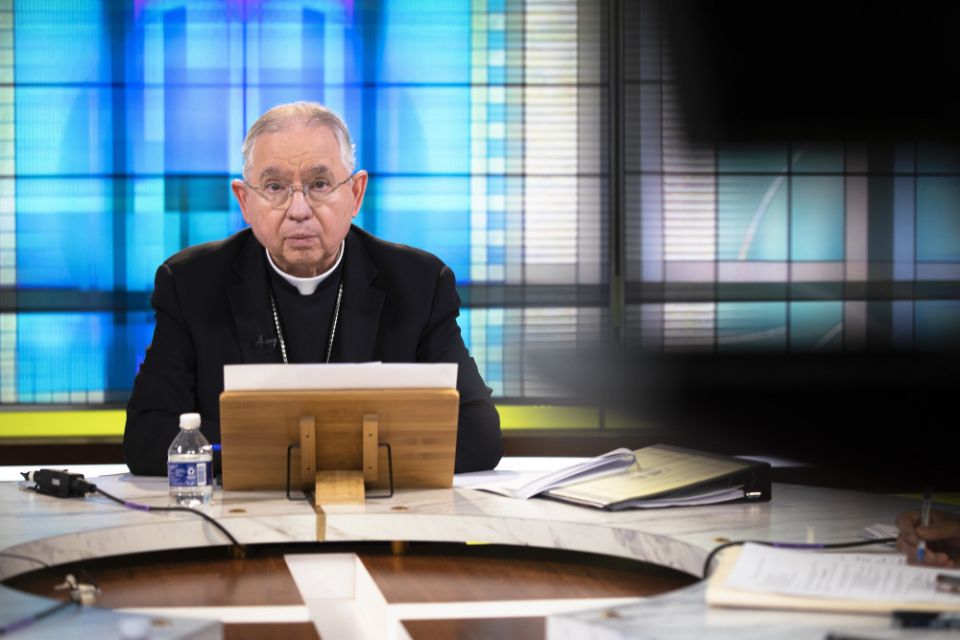 Archbishop Alexander Sample of Portland, Oregon, said that there was nothing in the proposal to contradict the letter from Cardinal Luis Ladaria of the Vatican's Congregation for the Doctrine of the Faith, because the bishops did not plan to adopt a national policy. But, as a practical matter, what is the difference between a national policy and a set of recommendations? The American Life League and other such groups would be denouncing bishops who did not apply whatever recommendations emerge, and do so with the kind of zealous interpretation such groups demand. Sample also said the dialogue with political leaders that Ladaria called for had been going on all along, which is true, but he ignored Ladaria's request that the U.S. conference consult with other episcopal conferences.

Many bishops spoke against proceeding with a document. I was especially impressed by Bishop Robert Coerver of Lubbock, Texas, who identified the various points over the past eight months at which the political cart was getting in front of the doctrinal horse. San Diego Bishop Robert McElroy explored the theological complexities in explaining why this process should not be rushed.

Cardinals Wilton Gregory of Washington and Joseph Tobin of Newark, New Jersey, spoke movingly about the need for unity. "The choice before us at this moment is either we pursue a path of strengthening unity among ourselves or settle for creating a document that will not bring unity, but may very well further damage it," said Gregory. "Voting in the affirmative will produce a document but not unity," Tobin said.

The really instructive comments, however, came not from the bishops who rose to oppose the document, but from those who spoke in its favor. No matter how hard Gomez and Rhoades tried to convince everyone that this was not about politics, one bishop after another got up and insisted this was all about President Joe Biden.

Bishop Liam Cary of Baker, Oregon, bless his heart, gave the game away, saying, "We've never had a situation like this where the executive is a Catholic president who is opposed to a teaching of the church."

So, it is about Biden.

No matter how hard Gomez and Rhoades tried to convince everyone that this was not about politics, one bishop after another got up and insisted this was all about President Joe Biden.

Read this next: Ahead of Communion document vote, Pope Francis' US allies urge delay

If there was any doubt, Naumann made clear it was the politicians who forced the bishops' hands, and then proceeded to argue Biden had essentially invented the idea that abortion was a right, although the language of the Roe decision, written in 1973, used that language. Bishop Thomas Daly of Spokane, Washington, doubled down on the political nature of the document and, what was different from the others, dragged up the McCarrick report, which he criticized for being incomplete.

One of the emerging memes among conservatives is to mention McCarrick's and Biden's name in the same breath as often as possible. Bishop Donald Hying of Madison, Wisconsin, did not mention McCarrick, but he did mention that many people in his diocese want the bishops to address the Biden situation.

So, how is this not about politics? The attempts to blame the media for politicizing the issue were as laughable as they were predictable.

I am not much of a fan of the adjective "sophisticated." Sometimes, simple and rustic are much to be preferred. Still, the lack of theological sophistication on display during the debate was shocking. Watching "Mother Angelica Live" reruns does not count as ongoing theological formation.

As I write, we do not know how the vote went but I suspect the proponents of drafting a document won the ballot. But they have lost something far greater than a single vote. They have divided the conference in ways it has never been divided in my lifetime, perhaps ever. And it is difficult to see how they will ever build back a spirit of communion and affective collegiality.

As the universal church begins a profound exercise in synodality, the United States is saddled with a bishops' conference that is not only divided on issues but is filled with men who can scarcely contain the contempt they have for one another. So much for knowing Christians by their love!

Column | US bishops' meeting: Disrespect and disunity on full display

Links: A popular pope, Garry Wills on abortion and the 'barstool' party

Your thoughts on Sen. Kaine's commentary about Biden and the bishops

Your thoughts on the bishops, Biden and Communion