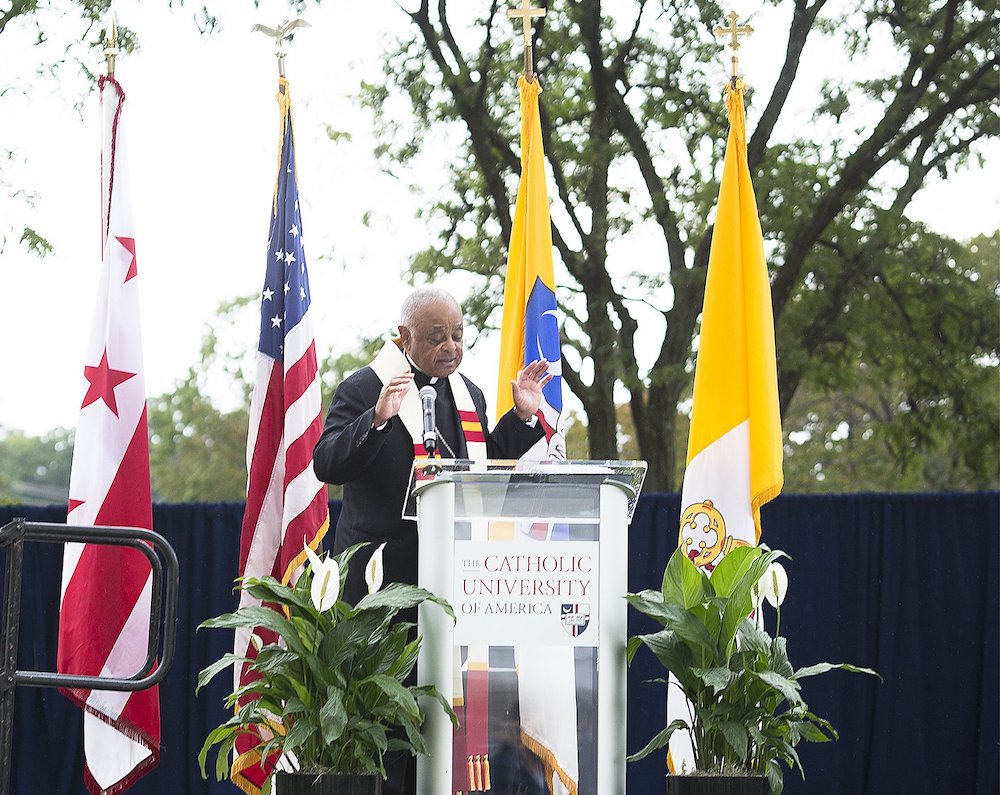 Washington Archbishop Wilton Gregory blesses the "Angels Unawares" sculpture at The Catholic University of America in Washington Sept. 27. The life-size sculpture, which depicts a group of migrants and refugees crowded on a boat, is a replica of the original one Pope Francis unveiled in St. Peter's Square at the Vatican during the 2019 World Day of Migrants and Refugees. (CNS/Tyler Orsburn)

It is rare to find a moment in the life of the Catholic Church, a 2,000-year-old global institution, that truly merits the adjective "historic." But Pope Francis' naming of Washington Archbishop Wilton Gregory as one of 13 new cardinals certainly fits the bill.

Gregory, who has led the church in the nation's capital since May 2019, will be the first African American to receive the red biretta, the first to be assigned honorary leadership of a parish in Rome, and the first to be included among the most select and influential group of Catholic prelates.

The significance of those firsts is hard to overstate. As University of Pennsylvania professor Anthea Butler told NCR on Oct. 26, Black Catholics have "waited a very long time for this to happen."

Or as Fordham University's Fr. Bryan Massingale put it: "This is a way of saying that Black Catholics are seen; that we matter in the church."

Beyond its history-making nature, there are many other reasons to praise Francis for choosing Gregory as a cardinal. Two in particular are worth noting.

First, the choice recognizes a prelate who has been at the often-lonely vanguard of Catholic bishops who have sincerely tried to confront the clergy abuse crisis. When coverage of the abuse scandals in Boston in early 2002 led to an unprecedented eruption of public outcry, it was Gregory who was in the unenviable position of leading the U.S. bishops' conference.

Eighteen years later, it is hard to recapture the sense of absolute crisis that was enveloping the prelates at the time. Then-Bishop Gregory, head of the small Diocese of Belleville, Illinois, somehow maneuvered his some 300 shell-shocked colleagues — including archbishops and cardinals years his senior — into creating a charter to establish uniform procedures for handling abuse cases.

While that Dallas Charter is certainly not a perfect document — the decision to apply its standards only to priests and not the bishops themselves remains a substantial failing — it represented a major step forward, and continues to serve as a model for the global church.

That last fact is partially due to Gregory's own skillful shepherding of negotiations with Pope John Paul II's intransigent Vatican officials to make some of the charter's procedures binding norms for the American church.

Especially now, when the Archdiocese of Washington, D.C., is reeling from the shocking revelations contained in the Vatican's Nov. 10 report on disgraced ex-cardinal Theodore McCarrick, honoring Gregory's work to protect children and vulnerable people in the church makes good sense.

The second reason to laud Francis' choice has to do with the way Gregory has deftly handled his role in Washington, at least so far. 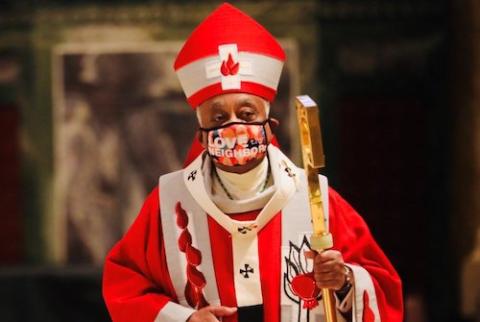 Washington Archbishop Wilton Gregory processes to the altar during the 68th annual Red Mass sponsored by the John Carroll Society at the Cathedral of St. Matthew the Apostle in Washington Oct. 4. (CNS photo/Catholic Standard/Andrew Biraj)

Although the 72-year-old has long been known as a quiet leader, he spoke up and spoke up loudly when the Knights of Columbus-owned St. John Paul II National Shrine hosted a visit by President Donald Trump only a day after he had ordered the dispersal of peaceful protesters near the White House with tear gas.

In words that are still striking in their force, Gregory said: "I find it baffling and reprehensible that any Catholic facility would allow itself to be so egregiously misused and manipulated in a fashion that violates our religious principles."

Francis has certainly made a wise choice in tasking a Cardinal Gregory to represent the church in a capital dominated by Trump, even if only for a few more months.

Read this next: Gregory's selection as first African American cardinal shows 'Black leadership matters'
A version of this story appeared in the Nov. 13-20, 2020 print issue under the headline: Francis makes historic, wise choice with Cardinal Gregory.