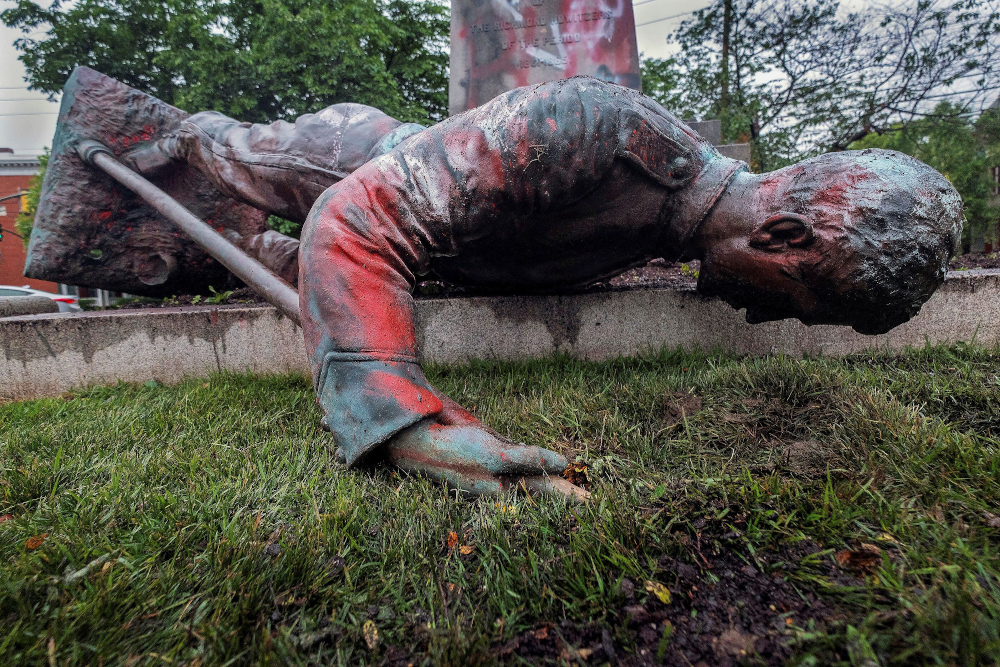 The toppled Richmond Howitzers Monument, erected in 1892 to commemorate a Confederate artillery unit, lies on the ground June 17 after protesters against racial inequality pulled it down overnight in Richmond, Virginia. (CNS/Reuters/Jay Paul)

The United States has again been forced to reckon with its complex and painful history in the wake of more instances of police brutality and murders of unarmed Black women and men. What began in recent weeks as public cries of righteous anger, galvanizing massive protests across the country and globe under the heading of Black Lives Matter calling for police reform and addressing systemic racism, has in recent weeks shifted to include critical evaluation of statues and public monuments of controversial figures of our nation's past.

I think this is, in general, a very good thing. While some of my colleagues, including fellow NCR columnist Michael Sean Winters, have argued that such critical evaluation ought to proceed but that the statues should not be toppled, my personal view on the statue question is not yet completely settled.

Some statues and monuments are incontrovertibly offensive, erected to recount a traitorous movement of rebels that fought against the founding principles of this nation in order to preserve their claim to have a right to own other human beings and profit from their labor. These should never have been permitted in the first place, and their presence is reprehensible and embarrassing. They should be removed. Period.

However, the memorial controversies have understandably moved from the political sphere to the ecclesial, raising more questions with an eye toward the West Coast. Even as a Franciscan friar and Catholic theologian who knows well the controverted legacy of my Franciscan brother and saint, Junípero Serra, I am slow to join the reactive voices such as those of the California bishops in absolutely defending the statue's presence, particularly in civic spaces. Like the U.S. as a whole (and in many countries including England, Germany, Australia, Denmark, among others), I think we need to ask some tough questions. What is gained by having such public monuments? What is lost in their absence?

While I generally agree with San Francisco Archbishop Salvatore Cordileone's recent presentation of the admirable qualities of Serra's life and legacy, I am still left wondering what purpose statues representing and public monuments honoring particular individuals serve. This is an especially important question when there are historically subjugated and disenfranchised communities for whom such public monuments symbolize something quite different from whatever admirable individual characteristics are attributable to the long-deceased Franciscan saint.

Just as so much of our nation and church's conversation about race is dictated and governed by the needs, comfort, ego and interests of the powerful — in this case, white people, including white church leaders — so too the terms according to which conversations about the validity of maintaining monuments to controversial individuals in the public square are shaped by those in power.

Whereas over the years many white people might not have even stopped to look at or consider the symbolic significance of these public shrines to racist traitors, many people of color are regularly forced to confront again the grotesque history of a country that denied them of their very humanity. And this is not merely limited to the most overt and offensive monuments, but is likewise the case when those descendants of enslaved people look at statues built to honor "national heroes" and "founding fathers" that benefited from and protected a system of chattel slavery.

White people often self-righteously and ignorantly reject such experiences, claiming, as did New York Cardinal Timothy Dolan recently in The Wall Street Journal and his personal blog, that, "Defacing, tearing down, and hiding statutes and portraits is today's version of puritanical book-burning." Dolan's commentary is a prime example of the solipsism, ignorance and unrepentant racism that motivates such myopia around white interpretations of public monuments. In addition to comparing the removal of controversial statues to the "cultural revolution" of "Mao's China," he followed up this white-person-as-victim diatribe with an offensive op-ed in the New York Post uncritically defending the police in the face of legitimate concerns around police brutality, budgetary spending and systemic racism.

Dolan, as is common in the assessment of the public monument debate through the lens of the white gaze, introduced false equivalencies to justify his dominant perspective, citing his own family's "bad apples" (what he calls "some embarrassing lemons," in a fruit-metaphor change-up) and his decision to not "erase their names from [his] family tree." But here's the thing, no one is calling for an erasure of our collective social history. Dolan's self-justification is premised on a straw man of his own making, his fear of "historical dementia" ironically sustained by his own uncritical advocacy for the status quo. 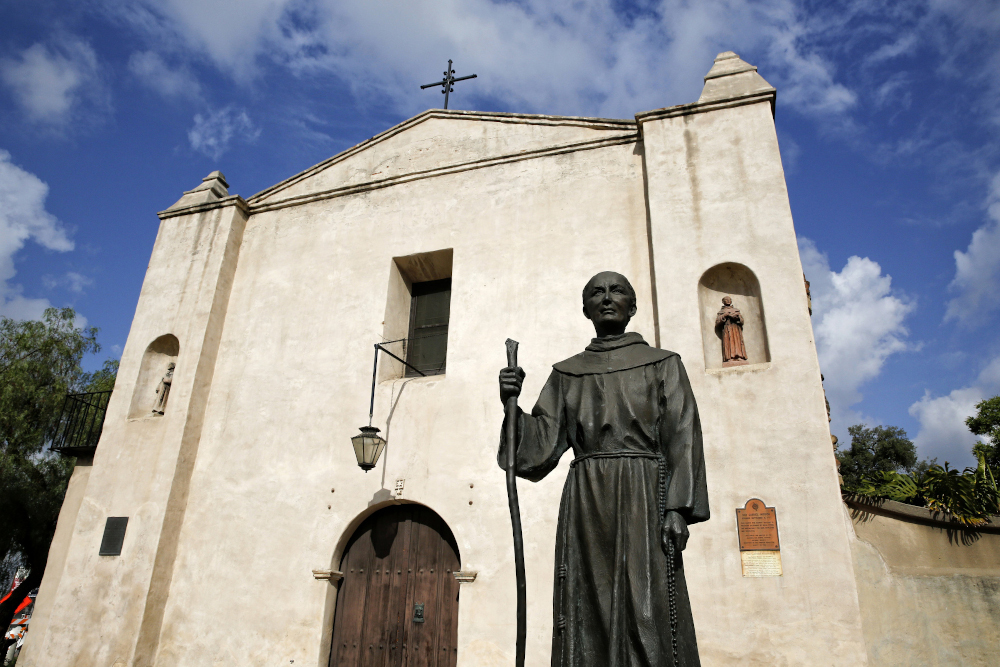 The problem is not whether controversial historical figures also have some meritorious features. The problem is how we remember such figures and what narratives we construct about and around them. Expensive, large and prominent statues and memorials in public spaces function; they operate in symbolic ways to signal to the community that this person is venerable and we ought to emulate them. Such monuments say almost nothing more about the individual cast in metal or stone but says a lot about the community that erects these shrines.

The New York Times columnist Jamelle Bouie spoke last week on "The Argument" podcast about the problem with honoring individuals with monuments when what we actually wish to memorialize are significant episodes in a shared history. He said, "A monument is a statement about what we want our public memory to be, how we want it to be represented. And it is an open question whether or not you can honor any singular individual in that way, in a way that captures the full complexity of who that person was, in a way that does not erase the things that ought not be erased about that person."

History needs to be told and told accurately, but when we prioritize the views and feelings of the powerful and privileged, those who have the least to lose and most to gain by the persistence of such controversial public displays, we continue to contest, silence, dismiss and erase the experiences and history of minoritized populations in our communities.

Which brings me to the Catholic social principle of the preferential option for the poor and vulnerable. According to church teaching, this principle is expressed primarily for the sake of adjudicating economic policy, but its reach extends beyond to include shaping the way we ought to make all collective decisions, including what voices and experiences are prioritized throughout the process. The U.S. bishops explain in their document Economic Justice for All that:

The "option for the poor," therefore, is not an adversarial slogan that pits one group or class against another. Rather it states that the deprivation and powerlessness of the poor wounds the whole community. The extent of their suffering is a measure of how far we are from being a true community of persons. These wounds will be healed only by greater solidarity with the poor and among the poor themselves.

What has been missing from much of the discussion about statues is an affirmation that the voices that are most important to be heard in the debates are those of the poor and marginalized — and not just the financially poor, but the poor in political power and poor in historical representation.

What has been missing from much of the discussion about statues is an affirmation that the voices that are most important to be heard in the debates are those of the poor and marginalized — and not just the financially poor, but the poor in political power and poor in historical representation.

I am less concerned about the removal of a statue of my Franciscan brother in California, a friar who has been dead for centuries, than I am about what the insistence by the powerful that his bronze representation stay in place means for Native Americans and other minoritized communities in our country and church. Historically, their voices have not been heard, nor their experiences taken as equally valid. Instead of defending the products of decisions made without their consent in the past, we as a society and church should be prioritizing their experience of these public symbols in the decision-making process of these monuments in the present.

While the question remains open about what to do with monuments to individuals like Serra or Washington or Lincoln, Bouie makes a compelling case for the lesson we should learn now about those edifices we might build in the future:

But if we're thinking of building new things, I'm not sure that what we should be looking for are individuals whom we can build a collective mythology around, but moments and events because that's really what we're talking about when we're talking about the things that hold us together as Americans.

The very same can be said about the church.