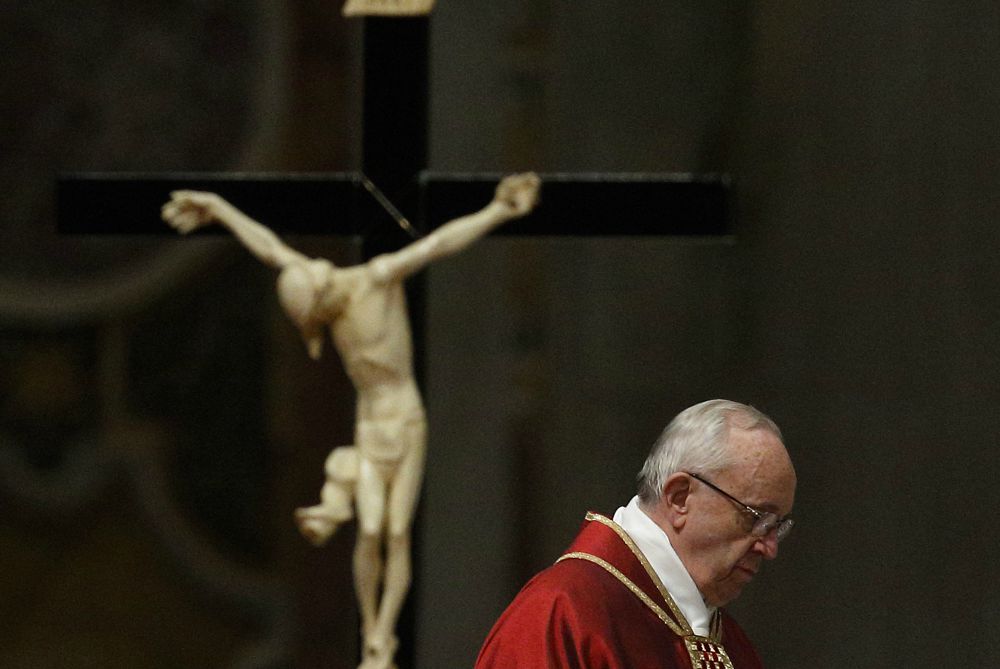 Pope Francis walks by a crucifix as leads the Good Friday service in St. Peter's Basilica at the Vatican March 30, 2018. (CNS/Paul Haring)

To avoid preaching about the evil of the death penalty on Good Friday is akin to not preaching about the joy of the resurrection on Easter Sunday. The central scriptural context of the liturgical readings is focused on the state execution of Jesus Christ. And yet, if previous experiences are any indication, anecdotal evidence suggests that few Catholics will hear their pastors deliver a homily this Friday in which the Passion of the Lord is connected to the sin of capital punishment.

The very nature and purpose of the Good Friday homily begs such an engagement. As the General Instruction of the Roman Missal makes clear, the homily ought to be an explanation of the readings that ties together the mystery we celebrate in faith and the needs and contexts of the people gathered in assembly. But the homily is not merely an opportunity for exegesis or catechesis, it is meant to inspire, challenge, lift up and embolden the faith of the hearers.

The important 1982 U.S. bishops' conference document "Fulfilled in Your Hearing," on the role of the homily in liturgy, reminds us that "the homily is preached in order that a community of believers who have gathered to celebrate the liturgy may do so more deeply and more fully — more faithfully — and thus be transformed for Christian witness in the world" (no. 43). Likewise, in 2012, the U.S. bishops' conference issued another document on the homily on the 30th anniversary of "Fulfilled in Your Hearing." This text, titled "Preaching the Mystery of Faith," states: "The purpose and spirit of the homily is to inspire and move those who hear it, to enable them to understand in heart and mind what the mysteries of our redemption mean for our lives and how they might call us to repentance and change" (p. 30).

Given the purpose and place of the homily, the subject of the death penalty in the context of the United States offers both the preacher and the assembly an important opportunity. For the former, while it takes courage to discuss a subject that will surely find a mixed reception in many congregations, it is an opportunity to directly address the continued and pressing relevance of the church's teaching on the inexcusability of capital punishment as borne witness to in the Lord's passion and in the many hundreds of death-row inmates today. For the assembly, it is an opportunity, as the U.S. bishops' conference documents on preaching recall, to grow in understanding of the faith, see the connection between that faith and an injustice in our midst, and thus move toward greater transformation in order to be Christian witnesses in the world.

Beyond the homiletic impetus for it, the need to address capital punishment as a pressing moral issue in our day is heightened by the recent Amnesty International report on global trends in the death penalty, which was published just last week. While some of the statistics will not be surprising — the greatest number of state executions took place in nations like China, Iran, Saudi Arabia, Vietnam, and Iraq — some of the report should be a particularly disturbing reminder of how unjust the United States' judicial system remains. For example, the report says that: "For the 10th consecutive year, the USA remained the only country to carry out executions in the region [of North and South America]."

Think about that for a minute. The national narrative and accompanying rhetoric used by politicians on both sides of the aisle often claims that the United States is a beacon of democratic hope and a model of integrity for the world. Furthermore, many of our leaders and ordinary citizens alike enjoy thinking of our country as a "Christian nation," but one of the starkest signs of our moral hypocrisy is witnessed in the data that show we are the only nation in the Western Hemisphere that sentences its own citizens to death. And, according to the Amnesty report, as of 2018 the number of death sentences and executions increased in the United States from 2017. We are in the worldwide minority of countries that still maintains the death penalty, and those with whom we share that appalling company include an embarrassing collection of dictatorships and promoters of state terrorism.

One of the traditional go-to justifications for supporting the death penalty among American Catholics had been a clause in the 1992 Catechism of the Catholic Church that acknowledged the possibility that state execution of criminals could be justified as a last resort and for the sake of the common good. That document was promulgated under St. John Paul II, who was an outspoken critic of the death penalty (including in the United States) and who, according to reporting by Jesuit Fr. Thomas Reese, didn't want to include the exception and would have preferred to see the practiced entirely abolished. "But some in the Vatican were concerned about how the church would explain its change in teaching," Reese explains. So, to avoid having to provide a difficult explanation, "John Paul had the catechism say that the death penalty was only permitted 'if this is the only possible way of effectively defending human lives against the unjust aggressor.' The catechism quotes John Paul, who stated that cases requiring the execution of the offender 'are very rare, if not practically nonexistent' (no. 2267)."

Last August, Pope Francis accomplished what John Paul could not during his own ministry as bishop of Rome. The pope instructed the prefect of Congregation for the Doctrine of the Faith to revise paragraph 2267 of the catechism. This summary of the church's teaching now reads:

2267. Recourse to the death penalty on the part of legitimate authority, following a fair trial, was long considered an appropriate response to the gravity of certain crimes and an acceptable, albeit extreme, means of safeguarding the common good.

Today, however, there is an increasing awareness that the dignity of the person is not lost even after the commission of very serious crimes. In addition, a new understanding has emerged of the significance of penal sanctions imposed by the state. Lastly, more effective systems of detention have been developed, which ensure the due protection of citizens but, at the same time, do not definitively deprive the guilty of the possibility of redemption.

Consequently, the Church teaches, in the light of the Gospel, that "the death penalty is inadmissible because it is an attack on the inviolability and dignity of the person" and she works with determination for its abolition worldwide.

This week marks the first Good Friday liturgy since this clarification of the church's teaching on the death penalty. I cannot think of a more auspicious time to address it than when we gather in prayer and worship to commemorate the time our Lord and Savior was executed as a victim of capital punishment. As we call to mind the end of Jesus's earthly life, may we open ourselves to becoming ever-more "pro-life," remembering that those on death row have as much dignity and value as any other person, born or unborn; and that no one, not even the state, has the right to take another's life.

[Daniel P. Horan is a Franciscan friar and assistant professor of systematic theology and spirituality at Catholic Theological Union in Chicago. Follow him on Twitter @DanHoranOFM]

Editor's note: We can send you an email alert every time a Faith Seeking Understanding column is posted to NCRonline.org. Go to this page and follow directions: Email alert sign-up.