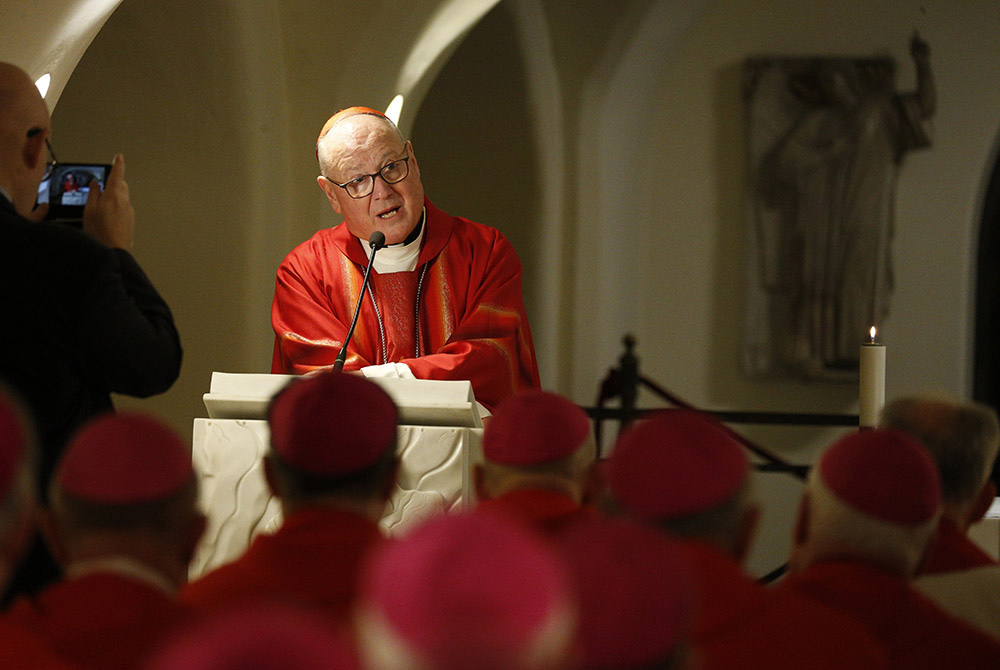 Cardinal Archbishop Timothy M. Dolan of New York gives the homily as U.S. bishops from the state of New York concelebrate Mass in the crypt of St. Peter's Basilica at the Vatican Nov. 14, 2019. (CNS/Paul Haring)

The ongoing collusion between certain U.S. bishops and President Donald Trump hit its nadir point this weekend. Or at least we have to pray it did.

Crux's Christopher White obtained a recording of a phone call that took place on Saturday between Trump and an estimated 600 Catholics, among whom were bishops and Catholic school superintendents. Leading the pack was New York's Cardinal Timothy Dolan, who seems to like to boast about his relationship with Trump almost as much as Trump likes to boast about himself.

In the call, Trump repeatedly emphasized his support for the "pro-life movement" — by which he means the "anti-abortion" crusade — claiming that it has "been at a level that no other president has seen before, according to everybody."

In addition to his anti-choice record, Trump also hailed his own support for school choice and, specifically, for Catholic schools.

It was clear that Trump was begging for some sort of backing from church leaders as he repeated warnings of dire consequences for the Catholic Church should he fail to be reelected.

After his opening comments, Trump then took questions from a pre-selected group, beginning with New York's Cardinal Timothy Dolan. According to Crux:

Dolan was the first to speak, whom the president hailed as a "great gentleman" and a "great friend of mine," adding that he respects what the cardinal "asks for."

The New York cardinal said he was "honored to be the lead-off batter, and the feelings are mutual sir," noting that the two had been on the phone often in recent months and joking that the cardinal's 90-year-old mom in Missouri says "I call you more than I call her."

This schmooze, of course, was nothing new. Dolan has publicly cozied up to Trump since his election, even offering the invocation as his inauguration.

At the time, Dolan claimed that he wasn't endorsing the president's policies, but only attempting to show civility in a polarized time in the country. In this call, though, the cardinal has shown his true colors, so seduced by power and celebrity that he has deluded himself into thinking he is using his influence for good. 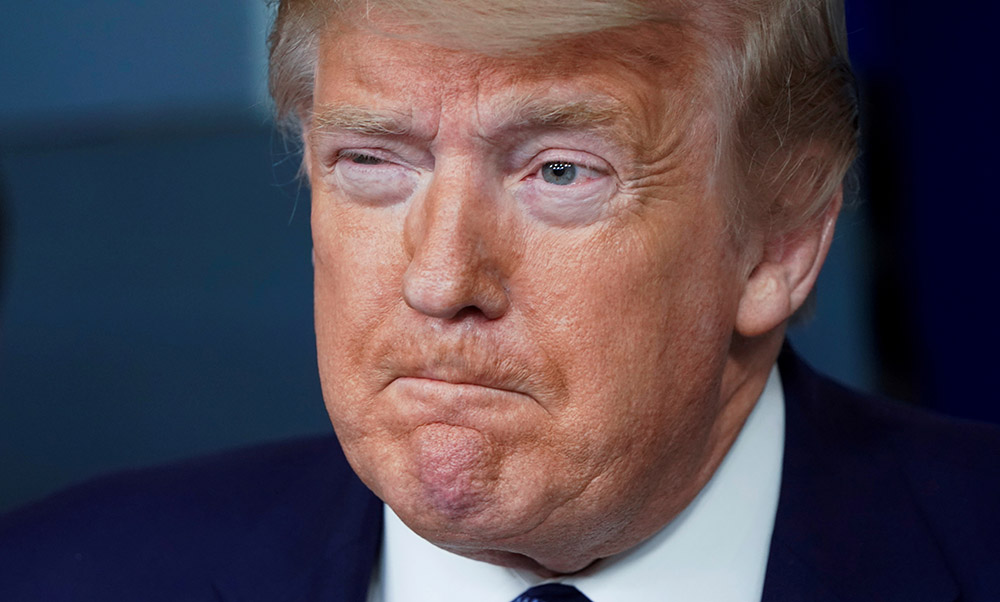 Dolan was on the call ostensibly to advocate for Catholic schools, begging the president for help with tuition assistance programs and lamenting the ways that the pandemic has put Catholic institutions in mortal danger.

"We need you more than ever," he pleaded.

But the real threat to Catholic schools is not a lack of funds, it is a leader who obsequiously strokes the unquenchable ego of the most dangerous and immoral president in U.S. history. What kind of example does it set for children, when one of the most powerful Catholic clerics in the country calls a man who boasts of being able to "do anything" to women, to "grab them by the p***y," a "gentleman"?

As I have written previously, Dolan and other bishops have been happy to oblige Trump with their tacit support, in exchange for certain political advantages, like appointing extremely conservative, anti-choice Catholics like Brett Kavanaugh (like Trump, also accused of sexual assault) to the Supreme Court and signing executive orders to protect the so-called religious freedom of religious institutions, an issue particularly close to Dolan's heart.

But what has the cardinal really gained through Trump's support of his anti-abortion and religious freedom crusades?

Dolan and his church have won the right to deny loving same-sex couples the chance to adopt children; the ability to flout employment laws and fire ministers and teachers at will for any reason; the freedom to deny women, both Catholic and non-Catholic, access to contraception; the privilege of blocking millions of dollars of critical funding to international aid organizations if they even dare to advise poor and victimized women about the option of abortion; the chance to obstruct women from their constitutional right to reproductive choice.

And in order to achieve these goals by ingratiating himself to Trump, think about who and what Dolan has thrown under the bus. Consider the refugees on our border who are treated like they are in concentration camps, their children put in cages; the people of color and Jews living in fear of the white supremacists and anti-Semites who feel emboldened by this president; the poor and hungry Americans who have had their food stamps programs gutted.

Also sacrificed are those who are suffering or dead from the coronavirus because this president in his hubris closed the office of pandemic preparedness and presided over one failed federal response after another. As The Huffington Post reported, the president also used the shock of the outbreak to push forward callous rollbacks on our environmental protections, suspending the enforcement of bedrock clean air and water laws and pushing forward a proposal to open a portion of an Alaskan National Park to copper, zinc and other minerals mining.

That is just the tip of the iceberg of the ravages that Trump has unleashed on the American people and our planet. What a "great friend" the cardinal has in this president.

Yes, Dolan and other bishops are probably desperate for funding for Catholic schools, but prostituting the church to Trump is the worst possible solution to save an institution that is supposed to teach morality and hope to our children.

Rather than pander, why not just peddle one of the dozens of parishes he closed down in Manhattan to keep these entities afloat? Some of these properties are worth tens of millions of dollars.

After Saturday's call, the mutual smarminess oozed into Sunday morning, with Trump attending the livestream of Sunday Mass at St. Patrick's Cathedral. The president, via Twitter, encouraged everyone to join him.

Dolan opened his homily by playing cutesy with Trump, saying he heard we have a "former neighbor worshipping with us," alluding to the fact that Trump Tower, the Mordor of 5th Avenue, is just blocks away from the cathedral.

Dolan, for good measure, heaped a bit more mendacious praise on Trump, thanking him for "working so hard to see that we can safely return to church as safely possible."

In his media appearances, Dolan often likes to put on an aw shucks, simple servant kind of image. (Those of us who watch CBS News were subjected to three such appearances by the cardinal on Easter Sunday.) But this latest episode reveals that this shepherd of the church is also a cynical, political operative, as willing to manipulate as he is to be manipulated. This might be easier to bear if he were just another one of Trump's dupes, but Dolan has shown too many times that he is eagerly complicit.

Long after the president finds his rightful place in the trash heap of history, one question will still linger over Dolan: What did it profit you to gain Trump's utterly corrupt world?