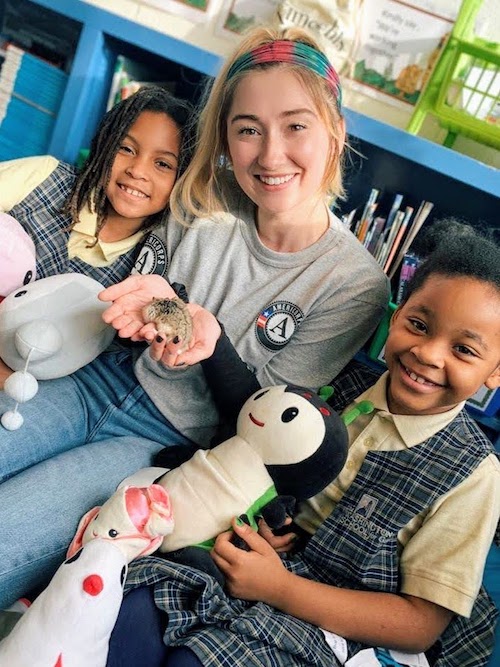 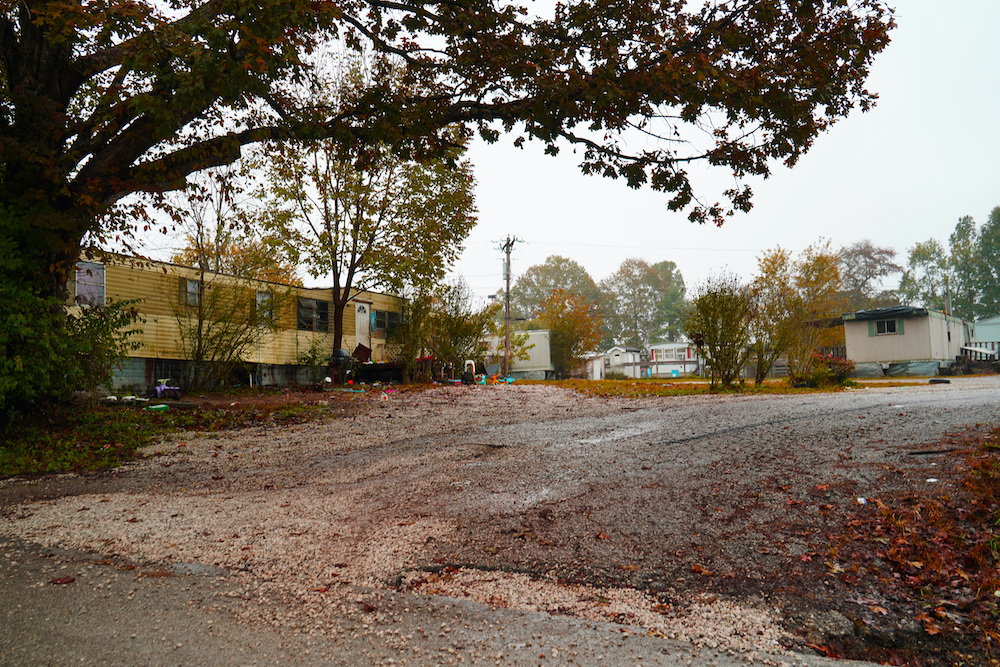 A trailer park in Clay City, Kentucky, near the Appalachian Mountains, 2018 (CNS/Katie Rutter)

Christ's followers are to be known by their fruits. As I wake from my slumber, I am compelled by the thought of all the fruit at the food pantry that must be sorted and distributed today. This service is fruit borne by belief in Christ. Before I head off, I affix a small pin with an 'A' on it — a reminder of my responsibility to the nation which supports my position through government programs for national service. I remember that the inseparability of theory and practice is not just a biblical idea; it is also an American idea.

Benny Mattis wrote this last year while serving as a year-long AmeriCorps volunteer with Christian Appalachian Project (CAP) in Kentucky. AmeriCorps volunteers meet critical human and community needs across the country and receive benefits to, among other things, help with professional opportunity and growth.

CAP is one of hundreds of programs across the country that offer full-time, faith-based service to help transform communities and lives. Based on the unique mission, calling and context of these programs, each one supports the spiritual, vocational and career development of volunteers living out faith in service to the world. Many volunteers in these programs are recent college graduates.

For decades, these programs have acted on the principles in Christus Vivit, Pope Francis' 2019 apostolic exhortation on young people, which recognizes that "social commitment is a specific feature of today's young people."

Especially now, young adults need pastoral guidance, good mentoring and chances to adjust their plans. They need opportunities to contribute to the common good. Looking back today, Mattis said his service experience "allowed me to build relationships across cultural divides, prayerfully discern God's will for my life during a time of uncertainty, and pursue further education with an AmeriCorps Education Award."

Government efforts can provide opportunities for young Christians to give and receive — and are not without precedent. 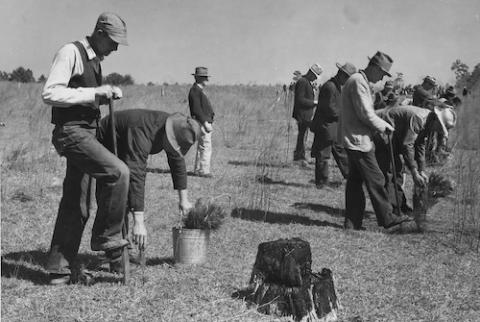 The Civilian Conservation Corps (CCC) was a voluntary public work relief program that operated from 1933 to 1942 for unemployed, unmarried men ages 18 to 25. It was the most popular of all the New Deal programs. An individual's enrollment in the CCC was believed to lead to improved physical condition, heightened morale and increased employability.

The National Youth Administration (NYA) assisted young Americans during tumultuous times to prevent them from falling victim to current hardships, and to maintain their potential for future achievement and societal contribution. Young people were provided with work experience and learn-by-doing training in a wide variety of fields.

Both programs responded to a great need to not only strengthen the common good, but also to help huge numbers of young people to have purpose and opportunity.

When President Franklin Roosevelt created the NYA in 1935, he stated: "I have determined that we shall do something for the Nation's unemployed youth because we can ill afford to lose the skill and energy of these young men and women.  They must have their chance in school, their turn as apprentices, and their opportunity for jobs — a chance to work and earn for themselves."

More recently, voices from across the political spectrum have supported the idea of national service that offers opportunities for personal and spiritual growth.

In 1990, leading conservative William F. Buckley Jr. said: "When they are students, young people hear airy speeches about the sacrifices of our ancestors, the wise statesmanship of our Founding Fathers, the richness of Western culture — but never in the context of: And what are you going to do to repay that debt?"

Buckley, a Catholic, recognized that secular work can be spiritually relevant: "The work is, of course, secular, but much secular work generates spiritual animation. Most of the time Mother Teresa is engaging in manual labor, but her work is self-sanctifying."

Mattis' volunteer work helped him on the inward/outward journey. "My volunteer service allowed me an opportunity to make a difference in the lives of others during a time of career transition," he said. "Living in community with other volunteers, I discovered new potential in myself as a leader and a teammate."

The COVID-19 pandemic presents challenges that young adults of faith can meet — and that will deeply shape them. An expansion of programs offering opportunities to act would help them serve communities, become better citizen leaders and growth in faith.

The CORPS Act is bipartisan legislation, recently introduced in the U.S. Senate, that would greatly expand national service programs to respond to the COVID-19 pandemic. It would fund 600,000 national service positions (an increase from the current 75,000) over a three-year COVID-19 response and recovery period. 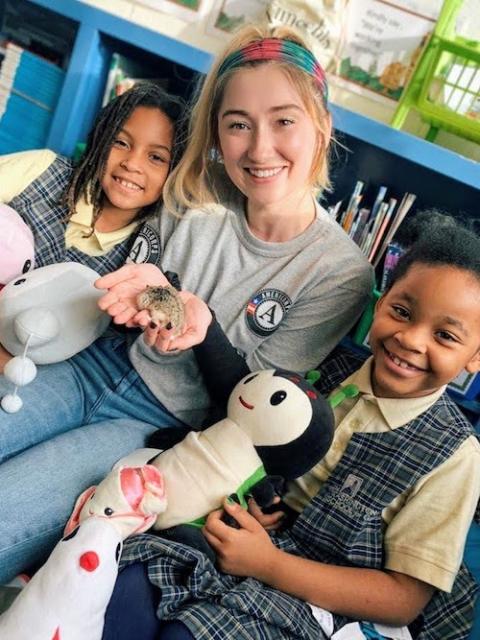 More individuals would be able to serve in the AmeriCorps program and help with critical community needs like increasing academic achievement, mentoring youth, fighting poverty and more. Because of this service, they receive student loan deferment, a living allowance, health benefits, education awards to help pay for college/graduate school or repay student loans, and career opportunities with the private, public and nonprofit sectors.

While respecting the separation of church and state, these opportunities allow individuals like Mattis to deepen faith by living out commitment to Gospel principles such as Catholic social teaching.

Moreover, a 2013 study of former full-time, faith-based volunteers by the Center for Applied Research in the Apostolate (CARA) showed that nearly half attend religious services at least once a week, which is significantly higher than the U.S. population (27%) and U.S. Catholic population (25%) in general.

Almost two in five former volunteers have considered a vocation to ordained ministry or religious life. And more than two-thirds of former volunteers say their volunteer service was important in influencing their choice of career, according to the CARA study.

Mattis said his faith was "shaped through the witness of program participants at the food pantry, who demonstrated the unseen, uncelebrated service which is the true life-long calling of Christ's followers of all ages.

"Through their example, I learned that service with CAP is just a starting point: Christ's followers are called to serve neighbors wherever they are, and regardless of whether we are blessed with the recognition that comes from wearing the AmeriCorps logo," he said.

Young people want to commit. They want to transform. They want to be part of the solution. Young people are showing up at protests and vigils to seek racial justice. Many of them are acting out of a deep commitment to faith – and need more opportunities to channel that desire and energy.

The opportunities created by the CORPS Act would allow thousands to be "accompanied and encouraged." Expanding national service is a way to act on Francis' call to empower "active citizenship." It can help a generation of young leaders "take up their responsibilities" to build a better world. 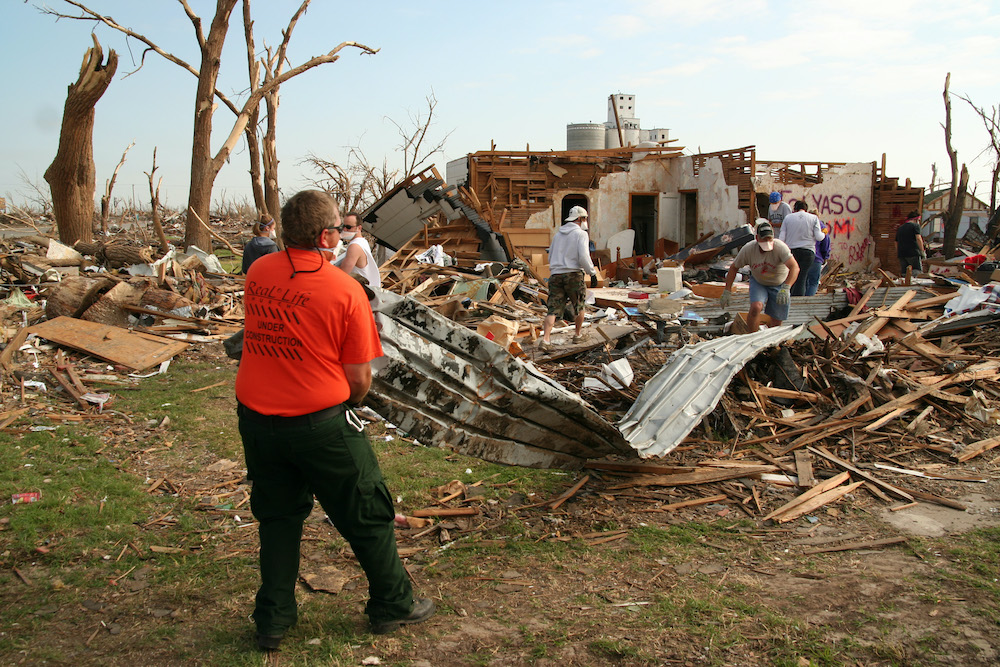 Americorps members from Manhattan, Kansas, clean up debris on May 19, 2007, created by the F5 tornado that struck Greensburg, Kansas on May 4. (Wikimedia Commons/FEMA/Greg Henshall)