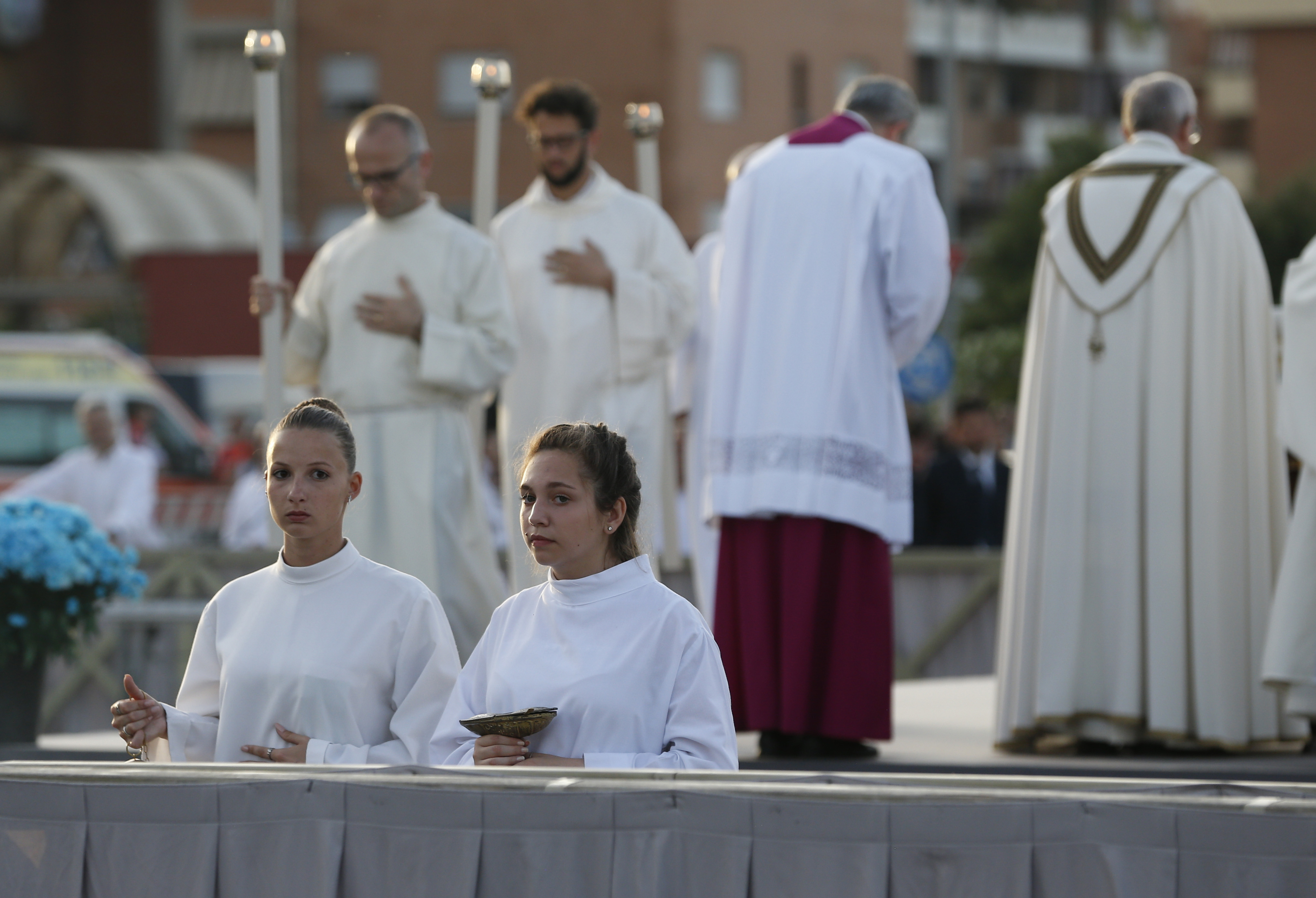 Altar servers are seen as Pope Francis leads Benediction in observance of the feast of Corpus Christi in Ostia, a suburb of Rome, June 3. (CNS photo/Paul Haring)

What do these popes have in common? Nicholas V (1454) authorised Christian conquerors to enslave native peoples. Innocent VIII (1484) endorsed the torture and execution of witches. Benedict XIV (1745) condemned taking interest on capital loans as a mortal sin. Pius IX (1864) declared non-Christians could not obtain eternal salvation. John Paul II (1994) taught that priesthood is reserved only to men.

All defended errors based on a mixture of misread scripture and ill-informed prejudice. The only difference is that whereas the other erroneous teachings have now been discarded by the official church, the prefect of the Congregation for the Doctrine of the Faith last month still repeated Pope John Paul II's mistaken view.

Archbishop Luis Ladaria writes: "The impossibility of ordaining women belongs to the 'substance' of the sacrament of order, a fact the Church recognizes. She cannot change this substance. … It is not just a question of discipline, but of doctrine." This is a massive claim that needs to be exposed for the fallacy it is.

Take note: the archbishop asserts that the exclusion of women is not just a practical custom going back to Jesus. A fundamental obstacle is at stake, a trait that makes every woman an intrinsic mismatch to the eucharistic priesthood of Christ. What is he talking about?

Editor's Note: Full original documentation for all the texts quoted in this article — and many more resources — can be found on John Wijngaards' website womenpriests.org. The site features introductory materials in 26 languages.

Jesus only chose 12 men in the original band of apostles. This was a symbolic act. He wanted these leaders of the new Israel to match the 12 tribal patriarchs of old. But he never created the 12 as a permanent institution. Nor did he want to establish a permanent norm of male leadership. The intention of instituting a male-only priesthood was only ascribed to Jesus by later generations who projected onto him their own conviction of female inferiority.

Some women presided at the Eucharist in early Christian communities. But the Hellenistic-Roman context in which the church grew up soon strangled such "anomalies."  The reason? Women were considered mentally and physically inferior. Roman law deprived them of public office. As Augustine succinctly remarked: "Women rank below men by nature and law."

In other words, the substantial obstacle to ordaining women lay in their inferiority as human beings. No one explained this as fully as Thomas Aquinas, heralded by the church as the champion of orthodoxy. "Even though a woman were made the object of all that is done in conferring Orders, she would not receive Orders," he taught, "for, since woman is in the state of subjection, the female sex cannot signify eminence of degree" (Summa Theologica, Suppl. 39, 1).

Why not? Like his contemporaries, Aquinas believed that the whole future child is contained in the male sperm. In procreation, a woman only contributes her womb — which is like a ploughed field in which a grain of seed has been sown (ST II, 18, 1). Every woman is flawed. Aquinas held that at birth the "female offspring is deficient and caused by accident. For the active power of the semen always seeks to produce a thing completely like itself, something male. So if a female is produced, this must be because the semen is weak or because the material [in the womb] is unsuitable, or because of the action of some external factor such as the winds from the south which make the air humid … " (ST, I, 92, 1, ad. 1).

"God's image in the full sense of the term is only found in man," Aquinas says elsewhere. "Women are created in God's image only to the extent that they too have a mind" (ST, I, 93, 4 ad 1). But women cannot use their brain fully because God "ordered men not women for intellectual activity" (ST, I, 92, 1). To use a metaphor, a woman may look like a luxury car, but she lacks a proper engine.

So is this why Jesus excluded women from his priesthood? Were they simply not fully human? Then-Cardinal Joseph Ratzinger, in his 1977 commentary on Inter Insigniores, rejected women's inferiority as a valid reason. But he did not acknowledge that throughout the centuries this prejudice justified the presumed 'tradition' of barring women from the priesthood.

And if women's inferiority is not the substantial obstacle in Ladaria's view, what can he be referring to? John Paul II provides a clue in his 1988 encyclical Mulieris Dignitatem.

Not in the driving seat?

A commentary on Inter Insigniores by the Congregation for the Doctrine of the Faith (1976) had already stated: "Christ is the Bridegroom of the Church, whom he won for himself with his blood. By using this language, revelation shows why the incarnation took place according to the male gender. It makes it impossible to ignore this historical reality. For this reason, only a man can take the part of Christ, be a sign of his presence, in a word 'represent' him in the essential acts of the covenant."

In Mulieris Dignitatem John Paul II expands on this theme. It was God's will from the start, he says, that the incarnation should happen in a man, a male.  "The Bridegroom — the Son consubstantial with the Father as God — became … the 'son of man,' true man, a male. The symbol of the Bridegroom is masculine," he writes.

John Paul II then goes on to explain that we may "legitimately conclude" that this was the reason why Jesus disqualified women from priestly service. He wanted to link the Eucharist to male priests who could represent him in his masculine bridegroom role. He writes, "It is the Eucharist above all that expresses the redemptive act of Christ the Bridegroom towards the Church the Bride. This is clear and unambiguous when the sacramental ministry of the Eucharist, in which the priest acts 'in persona Christi,' is performed by a man." To continue our metaphor, a woman does not qualify for the race for she is not a driver, only a spectator.

Are John Paul II's speculations sufficient ground to claim that the masculinity of the ordinand is substantial to the sacrament of holy orders? He cannot claim real support in tradition. On the contrary, as numerous theologians have pointed out, his view contradicts the overwhelming evidence for the incarnation embracing both men and women. "The Word became flesh," we read in the Gospel of John. The word flesh does not have a gender. As theologian Sr. Elizabeth Johnson points out, if the incarnation was restricted to the male, the female would not be redeemed since the ancient principle applies here quod non assumitur, non redimitur – "what is not taken up [in the incarnation], has not been redeemed."

The truth of the matter is that Jesus did not, in principle, exclude women from holy orders. Attempts through the ages to conjure up intrinsic reasons for linking maleness and priesthood have failed the test. And history delivers the knockout blow. Women have been verified compatible. Enter women deacons.

During the first millennium, tens of thousands of women were ordained deacons. Their rite of ordination has been preserved. It proves that women were ordained like the men, that is, sacramentally, to use the classic term. In other words, they qualified for holy orders. For the diaconate belongs to Orders. As the Council of Trent instructed, "If anyone says that in the Catholic Church there is not a hierarchy constituted by divine ordination, consisting of bishops, priests, and deacons: let him be anathema" (Session IV, Canon 6). So where does that leave the prefect of the doctrinal congregation?

[John Wijngaards is a theologian and writer, professor emeritus of the Missionary Institute London, and founder of the Wijngaards Institute for Catholic Research.]