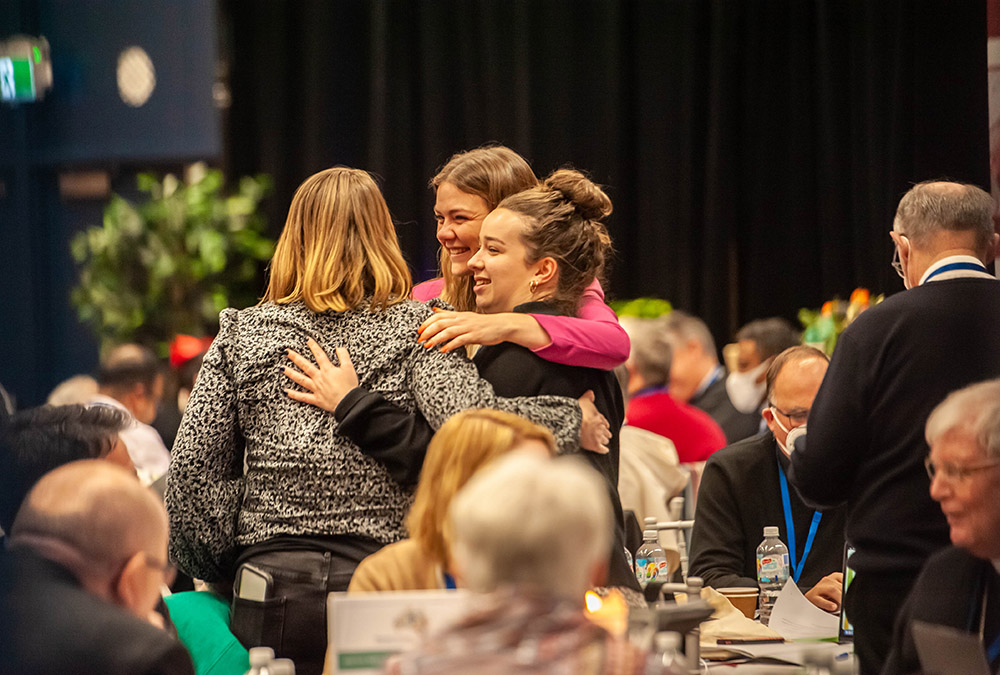 Women embrace on the final day of the second assembly of the Plenary Council of the Australian Catholic church in Sydney July 8. (CNS/The Catholic Weekly/Giovanni Portelli)

Editor's note: This article was written before the Oct. 27 release of the Working Document for the Continental Stage of the Synod of Bishops.

I was curious when the announcement was made, thinking that the pope's decision took its cue from the Second Vatican Council, with its four sessions where the time between sessions was a crucial period of fermentation. Clearly, the time between the two synods would also be a period of fermentation and therefore very much part of the synod process rather than just time-out.

I became more curious when, to my surprise, I was elected as one of the two Australian representatives to the second synod in 2015. As part of my preparation, I studied the Second Vatican Council, especially the work of the late Jesuit Fr. John O'Malley. I could see more clearly that the council was a process rather than an event, and that the two synods (or the one synod with two sessions) were also a process rather than an event.

I came to see that synodality meant not a gathering of some of the bishops some of the time but a journey of all of the church all of the time. Not many other than bishops gathered in Rome for the two synod sessions, but in the preparation for the first session and the time between the two sessions many others were part of the journey. 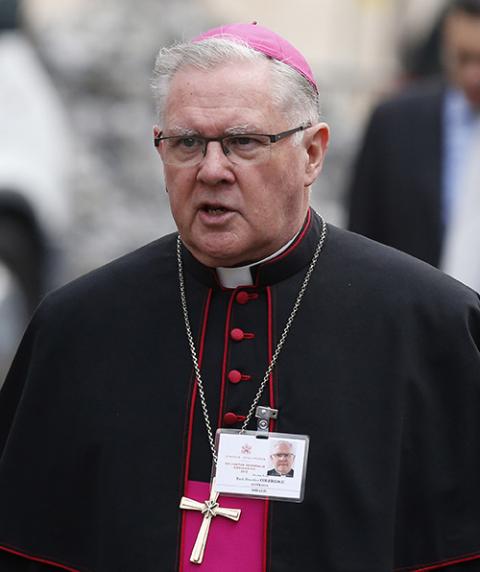 Archbishop Mark Coleridge of Brisbane, Australia, arrives for a session of the Synod of Bishops on the family at the Vatican Oct. 14, 2013. (CNS/Paul Haring)

The second synod session in 2015 was an extraordinary experience for many reasons. Halfway through, I couldn't see how we could achieve anything worthwhile. It seemed all over the place.

Yet by the end of the three weeks, we did produce something, which wasn't the last word but which was a real achievement that would lead to the pope's 2016 apostolic exhortation Amoris Laetitia. That experience taught me more of what discernment looked like, how it felt; it taught me to be patient and to trust the process.

That was why when in 2016 the Australian bishops decided for a Plenary Council, I proposed that we opt for two sessions, taking our cue from the Second Vatican Council and the synods of 2014 and 2015.

Some questioned the wisdom of this, thinking either that one session would be enough or that we should be open to more than two sessions. But we opted for two sessions, and in retrospect that seems to have been the right decision. It gave us time for the fermentation that true discernment requires, but it also gave us, as a kind of creative pressure, a time frame within which to work.

The journey of the Plenary Council had three phases: preparation, celebration and implementation. The first phase was long and complex, not unlike what we're seeing with the global synod now. The second phase comprised the first weeklong session (delayed by a year because of COVID-19 and eventually held online), a 10-month period of fermentation, and then the second weeklong session, this time in person. The third phase began once the second session concluded, and it will continue indefinitely into the future.

The global synod seems to have adopted a similar dynamic and has also, unlike the synods of 2014 and 2015, decided that the same people will attend both sessions.

Through that journey, we have learned that the process is, in many ways, the product. The challenge was not to come up with quick-fix solutions to the church's many problems or facile answers to our many questions. The work of discernment is slower and messier than that. 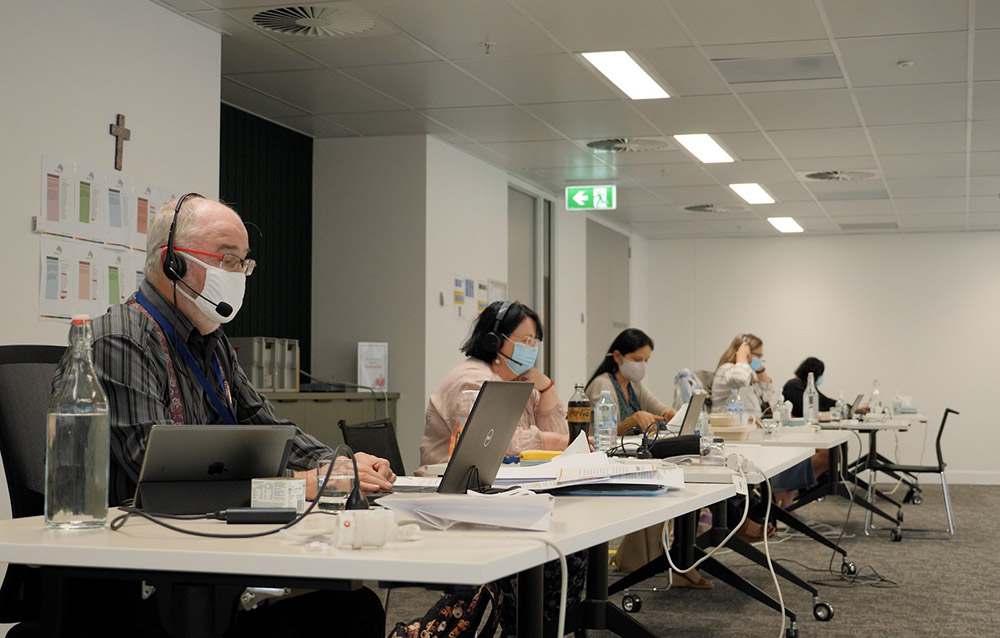 Attendees wearing protective masks and maintaining social distancing take part in the Oct. 6, 2021, session of Australia's Plenary Council in Brisbane. Most of the plenary was virtual because of COVID-19 lockdown rules, but in some areas people were allowed to gather in small groups. (CNS/Courtesy of Brisbane Archdiocese)

By undertaking that work, we become different, and that was the challenge: to become a different kind of church, a listening church, a humble servant church — poor, simple, welcoming, contemplative, joyful, missionary. That was what the Spirit was doing among us, moving us into God's future in a time of diminishment and disarray in the church.

The sense that this whole journey is the work of the Holy Spirit was crucial from the beginning and remains so now. That is no less true of the global synod than it was of our Plenary Council. It's what I came to see at the synod in 2015: that there was "something greater than Solomon here" (Matthew 12:42).

If that isn't true, then all you're left with is politics or ideology, and neither is enough to take us into the future God has in mind. Some critiques of both the Plenary Council and the global synod fail to see beyond the political and ideological. They see only Solomon.

Yet the Holy Spirit is both the great comforter and the great disrupter. In fact, the true comfort of God comes only through the disruptions of God, which means that comfort can come painfully. This was especially clear at the second session of the Plenary Council.

Halfway through the week, we reached a point of crisis. In the morning, a motion concerning the participation of women in the church was voted down in the deliberative vote, and that caused great distress for many of the members.

The negative vote brought to the surface years of frustration, grief and anger, and many members — not all of them women by any means — found this simply unacceptable. They stood in silence at the back of the hall in a gesture that wasn't political: It wasn't a protest or a demonstration.

When requested, they returned quietly to the tables for the scheduled spiritual conversation. But something had to be done to break the impasse.

At a lunchtime meeting of the bishops and the steering committee, decisions were taken to redraft the preamble of the motion, to have a second vote and to change the modus operandi on the floor of the assembly. The mood of the assembly changed through the afternoon, largely because members felt they had been listened to, and the second vote produced a different result.

This was a turning point in the assembly and in many ways its greatest achievement. I felt sure that this was the work of the comforting and disrupting Spirit.

Two other things appear more clearly as I look back. The first is that the art of improvisation is a vital part of the work of discernment.

No matter how thorough your planning — and ours was very thorough — you don't see certain flaws until you actually start putting it into practice. You can then either stick stubbornly to what you have planned or, more humbly, agree to improvise and change tack. You can't be too attached to your plans; they may not be the same as God's. 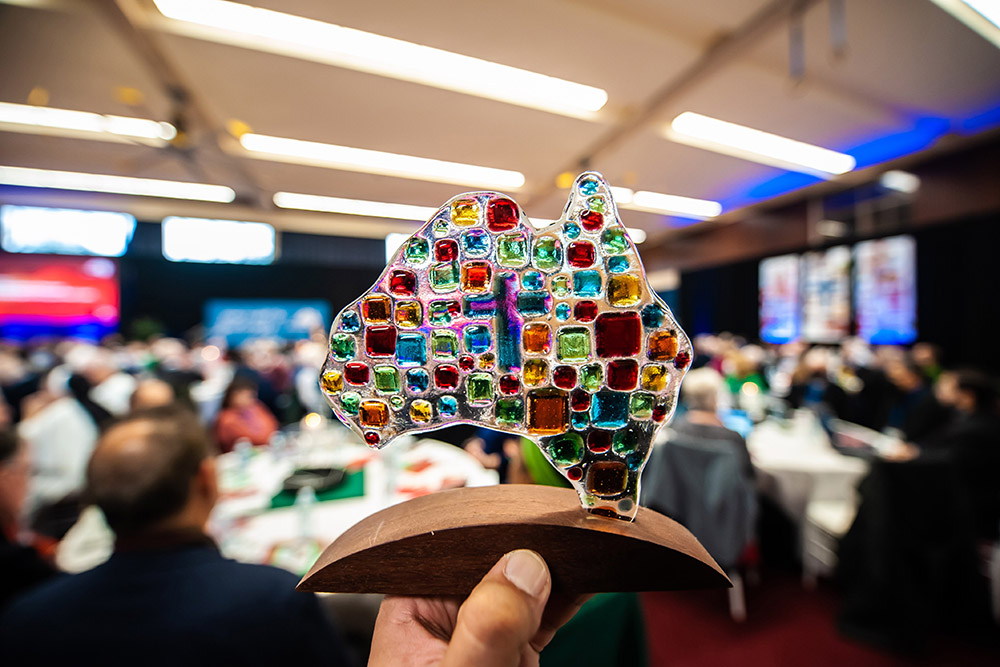 A person in Sydney holds a memento of the Plenary Council of Australia July 4. (CNS/The Catholic Weekly/Giovanni Portelli)

A second thing is that you need the right kind of leadership at the right time. As I look back across our Plenary Council journey, I can see how at different times the Spirit raised up different leaders — not all of them ordained — to meet the needs of the moment.

Some were called to the leadership that brought the council to birth; others guided the process of preparation and the consultation it involved; others shaped the time of fermentation between the sessions; others guided us through the second session with its moment of crisis; and others again will lead us through the phase of implementation we have now begun.

I presume it will be no less true of the global synod: that the Spirit will raise up the right leaders at the right time. There is already evidence that this is happening.

When I heard that Francis had decided to extend the Synod into 2024, I was pleased and a little relieved. The experience of the Second Vatican Council, the 2014 and 2015 synods and the Australian Plenary Council suggests that this is another sign of the Holy Spirit at work in this process, which seeks to change the way we are as the church at a time when we may have thought that real change was behind us.

But real change takes time, which, as the pope insists, is greater than space. To accept that time is greater than space, he says, "enables us to work slowly but surely, without being obsessed with immediate results. It helps us patiently to endure difficult and adverse situations or inevitable changes in our plans" (Evangelii Gaudium).