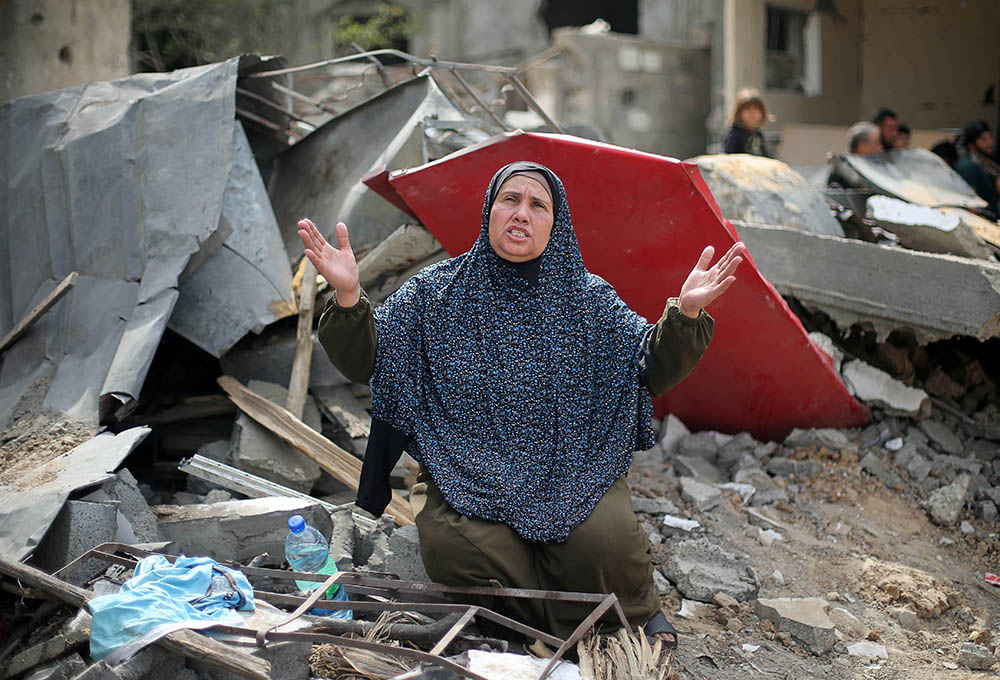 A Palestinian woman reacts after returning to her destroyed house in Gaza May 21, following the Israel-Hamas truce. The May 21 truce followed more than a week of fighting that claimed hundreds of lives. (CNS/Reuters/Ibraheem Abu Mustafa)

With Pope Francis, I "thank God for the decision to halt the armed conflicts and acts of violence" and pray for "dialogue and peace" in the Holy Land. In solidarity with the church of Jerusalem, I pray for "justice and peace."

As I contemplate the current crisis, I remind myself that violent conflict does not erupt in a vacuum. Repeated conflicts are evidence of a cycle of violence that needs to be broken. A cease-fire is only a first step on the long journey toward breaking the vicious cycle that has terrorized Israelis and Palestinians alike.

There has been a lot of focus on the immediate events that precipitated the latest Israel-Gaza war. In many ways, Jerusalem lies at the epicenter of the ongoing conflict. Sacred to Jews, Christians and Muslims, Jerusalem is a city that must be shared by two peoples and three faiths, but is increasingly claimed by one.

The church in the Holy Land identified two key precipitating factors that ignited the latest violence: Israel's denial of access to Al-Aqsa Mosque and its threatened home evictions in Sheikh Jarrah.

On May 9, the Latin Patriarchate of Jerusalem declared: "The violence used against the worshippers [at Al-Aqsa Mosque] undermines their safety and their rights to have access to the Holy Places and worship freely. The forced eviction of Palestinians from their homes in Sheikh Jarrah is also an unacceptable violation of the most fundamental human rights, the right to a home."

The patriarchate went on to declare: "Our Church has been clear that peace requires justice. Insofar as ... the rights of everyone, Israelis and Palestinians, are not upheld and respected, there will be no justice and therefore no peace in the city."

This insight is a key to understanding the ongoing conflict between Israelis and Palestinians. The recent Israeli provocations in Jerusalem lit a match, but the fuel for the fire was provided by longstanding injustices, systemic violations of human rights, and the daily acts of inequity and occupation. 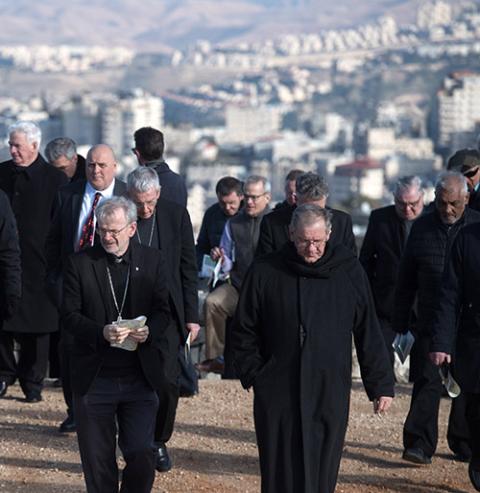 Members of the Holy Land Coordination visit East Jerusalem Jan. 14, 2020. The bishops convened virtually in 2021 for their annual meeting, under COVID-19 restrictions. (CNS/Bishops' Conference of England and Wales/Marcin Mazur)

From 2005 through 2018, I accompanied bishops of the U.S. Conference of Catholic Bishops on solidarity visits to Israel and Palestine. We met with the local church in the Holy Land and with Israelis and Palestinians. We also gathered with bishops representing episcopal conferences of Europe, Canada and South Africa.

The Holy Land Coordination, as our annual gathering was known, witnessed deeply disturbing instances of systematic discrimination against the Palestinian citizens of Israel and the terribly troubling realities of Palestinians living under occupation in East Jerusalem, the rest of the West Bank and Gaza. We also witnessed the security concerns of Israelis and the courageous work of some Israelis and Palestinians building bridges of understanding.

In 2008, the bishops of the Holy Land Coordination issued a communiqué that described the harsh consequences of separation and occupation:

The separation wall through which we passed was a vivid reminder of the security concerns of Israel as well as the deepening division between ordinary Israelis and Palestinians who lack the human contact that can help foster justice and reconciliation. We heard moving stories of how the wall compounds suffering and compromises human dignity by separating families, devastating the Palestinian economy and exacerbating the humanitarian crisis. We are particularly concerned for the dire humanitarian situation in Gaza, which has worsened since we visited there a year ago.

Tragically, the same is true today, only the situation is worse. The expansion of Israeli settlements in the West Bank, the stifling blockade of Gaza, the denial of building permits to Palestinians in East Jerusalem and the corresponding home demolitions, the humiliation of numerous checkpoints, the harsh police actions in Jerusalem and throughout the West Bank, and the increasingly frequent and violent attacks of radical settlers, together with the reprisals they engender, all have made a bad situation worse. And the Palestinian citizens of Israel suffer as well.

The occupation must end, and respect for human rights must grow, if Israelis and Palestinians are to break the cycle of violence.

In 2018, the Catholic bishops of the Holy Land warned that the Nation State Law passed by Israel's Knesset would "provide a constitutional and legal basis for discrimination among Israel's citizens, clearly laying out the principles according to which Jewish citizens are to be privileged over and above other citizens."

Instead, the bishops demanded that "Christians, Muslims, Druze, Baha'i and Jews" be "treated as equal citizens." This law provides a legal basis for discriminatory practices in employment, education, housing and land ownership.

Throughout the years, I have repeatedly reminded myself that Israeli Jews and Palestinian Arabs both have compelling narratives. Both have profound and historic connections to the land. One need only visit Yad Vashem, the World Holocaust Remembrance Center, for a vivid reminder of Israeli fears; or the impoverished homes of Palestinians in Gaza or the West Bank who fear occupying forces.

The United States bears a special responsibility, together with the international community, for helping Israelis and Palestinians to resolve the conflict. A recent report of the Congressional Research Service documents that "Israel is the largest cumulative recipient of U.S. foreign assistance since World War II," most of it in the form of military aid. This reality gives our nation enormous influence. 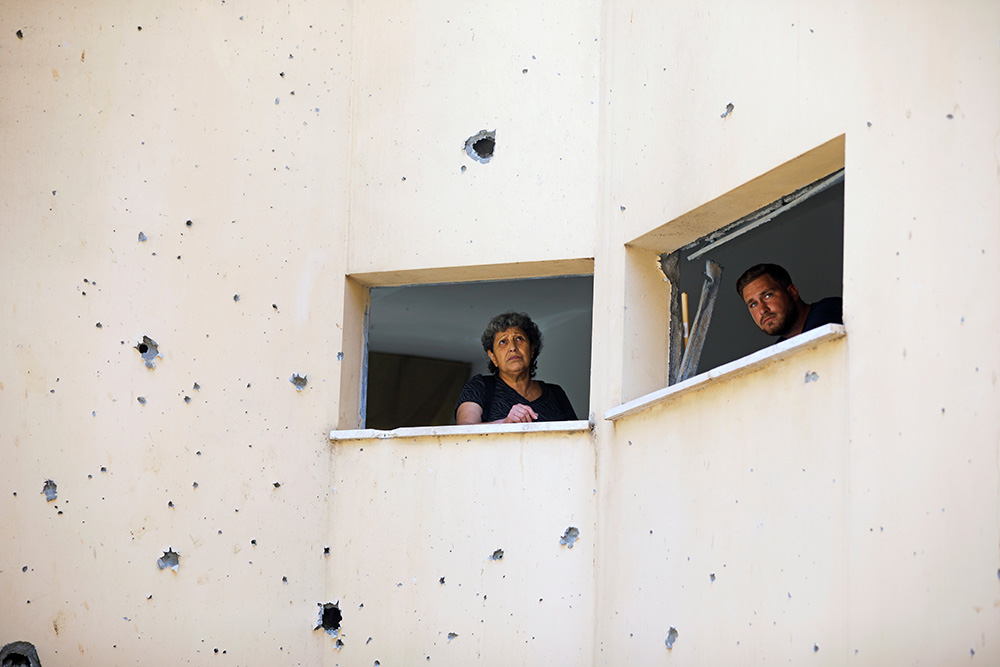 People look out May 20 in Petah Tikva, Israel, from a building damaged after a rocket fired from the Gaza Strip landed nearby. (CNS/Reuters/Nir Elias)

Unfortunately, our nation has not always played a helpful role. In 2017, the patriarchs and heads of churches in the Holy Land wrote a letter to President Donald Trump warning that changing the U.S. view on the status of Jerusalem as Israel's capital would "yield increased hatred, conflict, violence and suffering in Jerusalem and the Holy Land." They were right.

For decades, the Holy See and the U.S. bishops' conference have supported a secure and recognized Israel, living in peace alongside a viable and independent Palestinian state. Facts on the ground have called into question the viability of a two-state solution in the eyes of some, but regardless of the shape of a final status, the fact remains that the status quo is unsustainable. The only way to foster peace is to dismantle systemic injustices and to protect the human rights of all.

In what I considered a prophetic 2016 message, the Holy Land Coordination argued: "The right of Israel to live in security is clear, but the continuing occupation eats away at the soul of both occupier and occupied. Political leaders across the world must put greater energy into a diplomatic solution to end nearly 50 years of occupation and resolve the ongoing conflict so the two peoples and three faiths can live together in justice and peace."

Beyond the cease-fire, the occupation must end, and respect for human rights must grow, if Israelis and Palestinians are to break the cycle of violence.