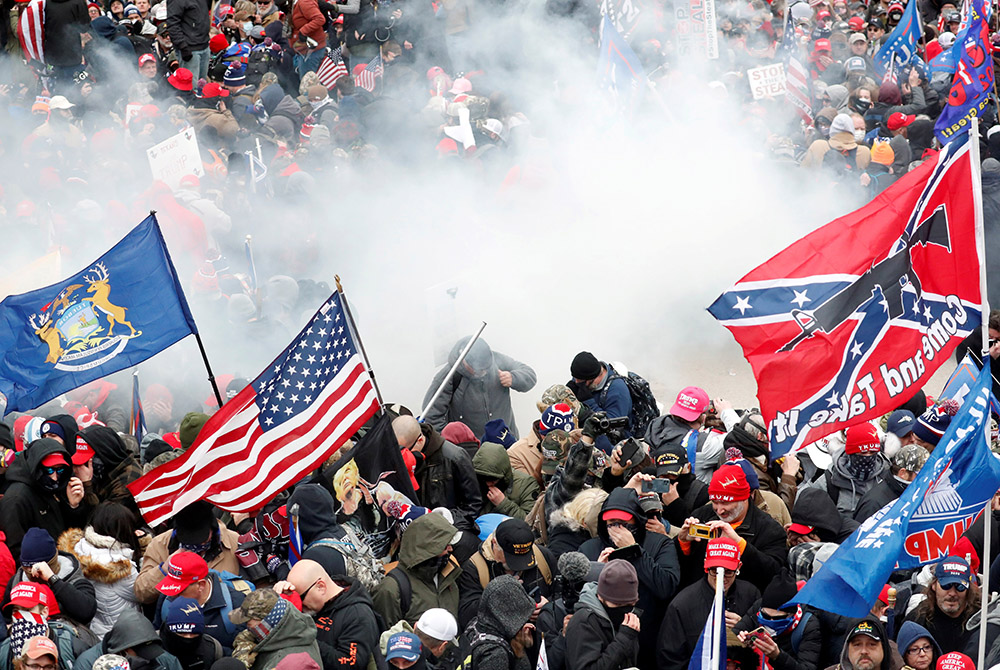 Tear gas is released into a crowd of demonstrators protesting the 2020 election results at the U.S. Capitol Jan. 6 in Washington. (CNS/Shannon Stapleton, Reuters)

I was deeply affected by our democracy coming under attack one month ago, with the storming of the Capitol by people wielding flags that proclaimed Trump, civil war and Jesus. I was traumatized by hearing people gleeful about the destruction, who were happy that members of Congress were terrorized. Listening to some people in those moments, I felt like I was face to face with evil.

Then, I realized, I have met them before.

I grew up in Oak Park, Illinois, one of eight children of white parents were who involved in the civil rights movement. My parents moved from the South Side of Chicago to this suburb because it was nationally known for its integration policies. However, the Catholic school we attended was not integrated. When riots burned through Chicago after the Rev. Dr. Martin Luther King Jr. was killed, my family took in a Black single Mom and her kids who lost their home, until they could get back on their feet again. When my parents enrolled the kids in our school, parishioners boycotted the church collection and sent threatening messages to my mother. The pastor asked my father to take the kids out of the school. I have met them before.

When a series of circumstances put me back on the Southwest Side of Chicago as a young adult, I was horrified to see the American Nazi Party headquarters across the street from our Catholic parish. When I walked a baby stroller through Marquette Park, I tore down signs on lamp posts and light poles that said, "N----- Keep Out," and "No Afros Allowed." I learned that it had not been long since the Ku Klux Klan marched through the park. I heard the priest at our parish supporting those who wanted to keep the Western Avenue color line from being crossed. I have met them before.

When living in the Marquette Park neighborhood and my children were small, I was mugged returning from the grocery store one night. The mugger tried to pull me down my front stairs as I was carrying groceries into my house. No one heard my yelling and it was not until the groceries fell and glass broke that the mugger yanked my purse from my arm and took off. Being locked in a bear hug by a mugger was very scary and I called the police. When the officer who came to take the report found out that the mugger was Black, the street was suddenly filled with police cars and the officer asked me, "When we catch him, do you want us to string him up in the tree in front of your house?" The mugger scared me. The police officer terrified me. I have met them before.

When I worked as a young mother to try and change things in my neighborhood and in the church, I did a lot of research about the local area. I read books that recorded stories of Catholics demonstrating against Dr. King when he marched and was attacked in the park. I found a document written by church leaders of different denominations in the Marquette Park neighborhood who were trying to keep the area white. The list of names in this document included the name of the priest who would baptize me as an infant some years later. The people I have met before have been here long before me.

During recent weeks, there has been action taken to hold President Donald Trump accountable, and calls to also hold accountable other politicians who participated in inflaming the people I have met before. Those in law enforcement who proclaim the need for law and order for some people but not for others, and those in Catholic and evangelical churches who proclaim respect for life but only for the unborn, should also be held accountable. All of us need to take stock of how we participated in what happened at the Capitol, through our action or inaction. Otherwise, we are like the people I have met before.