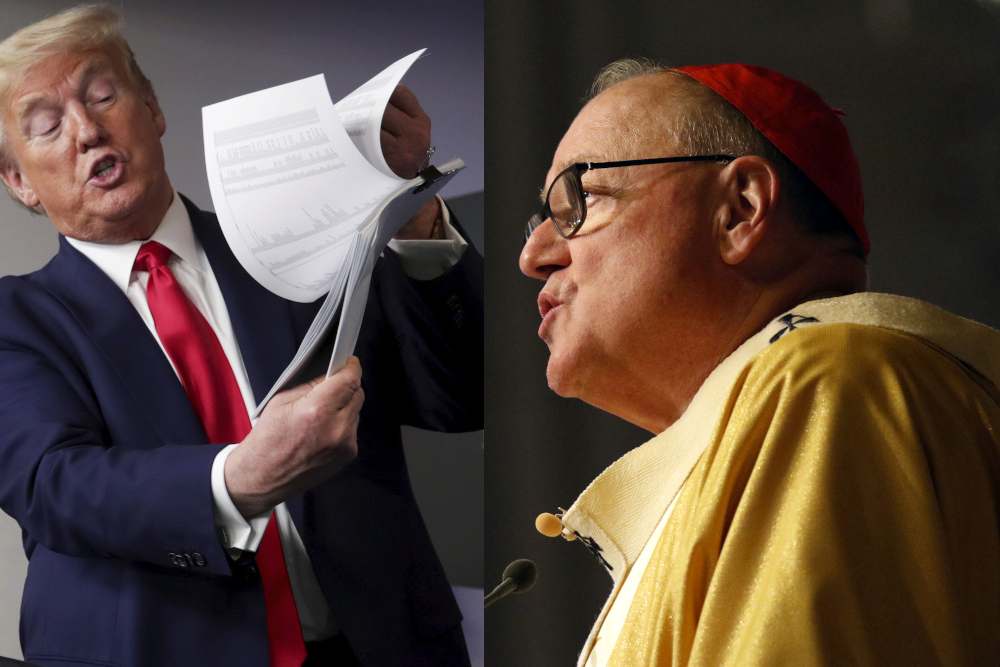 Editor's note: This article was originally published by U.S. Catholic magazine and then taken down without notice. With the author's permission, we are republishing the article in full with its original headline.

I wonder whether the U.S. Catholic bishops have crossed a sort of Rubicon recently.

When their Roman predecessor, the general Julius Caesar, brought his army illegally over the Rubicon River, he set in motion the events that ended the Republic and saw him presented with a crown. "The die is cast," he is reputed to have said as he marched his army toward Rome: there was no going back. What he had done could not be undone and it would change the shape of history.

I do not think that New York Cardinal Timothy Dolan is in any danger of being crowned emperor (or, anything else). But I do believe that his public flattery of President Donald Trump from the pulpit of St. Patrick's Cathedral and on Fox News may prove to be a moment from which American Catholicism cannot turn back.

Smart analysts have interpreted the cardinal's blandishments as a savvy effort to smooth-talk the president into devoting stimulus funds to help Catholic schools that, no doubt, will struggle in the post-pandemic environment. Maybe that is what the cardinal thinks he is doing. Maybe it even looks smart from one point-of-view. But it seems to me that we have to overlook a lot to see how smart the cardinal is being.

Dolan praised Trump's sensitivity to the "feelings of the religious community" on Fox News. Think about that.

Then, think about this. "I think Islam hates us," or, "The children of Muslim American parents, they're responsible for a growing number for whatever reason a growing number of terrorist attacks," or think about what Trump said after the Supreme Court struck down his first travel ban that fulfilled his campaign promise of a "total and complete shutdown of Muslims entering the U.S." — "Put a commission together. Show me the right way to do it legally."

Americans know that Muslims are members of the religious community. Certainly, so do Catholics. Dolan appears to have forgotten that, at least for a moment, while he was being so savvy.

Dolan forgot other things, too. He forgot children separated from their parents at our border, being kept in cages and sleeping on cold, concrete floors. He forgot the physical and sexual abuse that many of those children have suffered because of the Administration's disinterest in policing the foster care system they made necessary. He forgot the racist and xenophobic language that Trump deploys routinely to do the other thing that Dolan forgot: Trump's main preoccupation is not to build up the political community toward the common good, but to divide us so he can conquer.

What's regrettable is that those of us who attended the same Catholic schools that Dolan may have been trying to save do remember those things. And, we see why it is problematic for a Catholic bishop to forget them. Being formed in our faith, we see the ugly transaction at work here.

The U.S. bishops have attempted to engage in a transactional politics with Republican officials over abortion for decades now. I have written extensively about the history of how and why that happened and the role that the bishops have played in our national polarization because of it. That history can be read elsewhere.

But here at this Rubicon moment, we have to ask about the costs of these transactions. The U.S. bishops have gone so far down this transactional road with the Republican Party and with this president, now finally we have to ask whether they possess the moral credibility to function as religious leaders at all.

Actually, things are much worse than that.

Young people have abandoned the churches. Catholic or Protestant, Jew or Muslim, it is consistent. There is a crisis of religious disaffiliation. Perhaps 40% of U.S. adults under 40 report no religious affiliation at all. And now, while we all are isolated in our homes, in some sense none of us is religiously affiliated. For most Catholics, religious participation now means watching a television program. And, who is the central figure on their television screens? More often than not, it is someone who looks exactly like Cardinal Timothy Dolan.

What's regrettable is that those of us who attended the same Catholic schools that Dolan may have been trying to save do remember those things. And, we see why it is problematic for a Catholic bishop to forget them.

I like to think that this plague and its lingering trauma in our lives could have at least one lasting, beneficial impact. Perhaps many of us will rediscover why belonging to a religious community is important. From where we are in all this terrible suffering right now, perhaps that one good thing is something we can look forward to.

But put yourself in the position of a young person who has not gone to Mass for many years, who has formed doubts about the church because of the corrosive effects that these transactions have had on our politics and on us. And, imagine how that person might receive the things that Dolan has said these past couple of weeks. Do you expect to see that person at your local parish when we all go back to Mass? I do not.

Dolan and his brother bishops who worry about their schools are right. This crisis threatens to devastate Catholic schools and Catholic parishes. The Roman Catholic Church, hobbled already by its covering up sexual abuse and by the disaffiliation crisis, never will regain its former stature in our lifetimes. But now, I think, Dolan has made it much worse.

I wonder: is there anything any Catholic bishop could say at this point to make it better? In candor, I despair that so far not one even has tried.

There is a poem Trump reads during rallies. He uses it as an allegory for his immigration policy. A woman finds a wounded snake and heals it. Later, like Aesop's fable of the scorpion and the frog, she is startled when the snake repays her the only way his nature will permit — "Instead of saying thanks, the snake gave her a vicious bite."

Trump should never teach literature. But like the woman in the poem, I am worried that Dolan and the bishops soon will learn how their transaction must end.

[Steven P. Millies is associate professor of public theology and director of The Bernardin Center at Catholic Theological Union in Chicago. His most recent book is Good Intentions: A History of Catholic Voters' Road from Roe to Trump (Liturgical Press, 2018).]