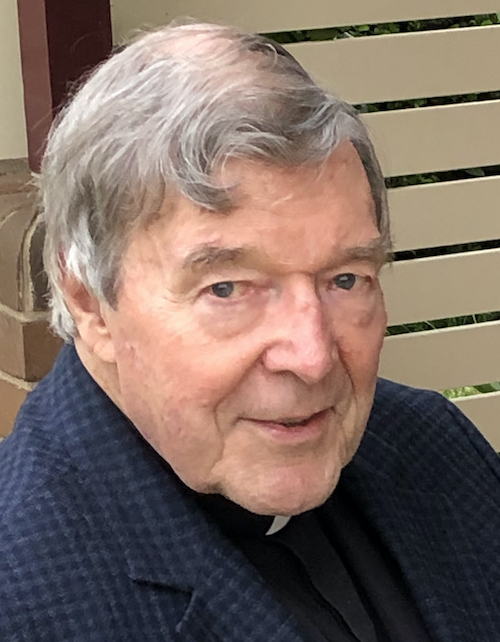 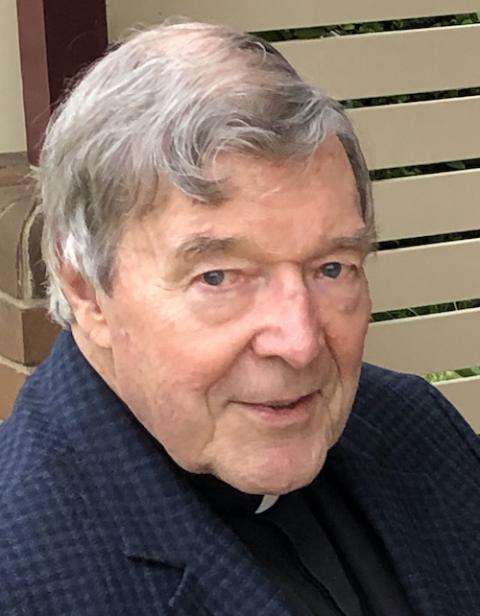 George Pell is a cardinal in the Catholic Church. And that is where the problem lies. It lies as well in the institution. The two are inextricably intertwined so that the fate of one informs the other.

Some, like Pope Francis, say, "I would like to pray today for all those persons who suffer an unjust sentence because someone had it in for them." The Vatican News reported that the pope made this statement at his morning Mass in Santa Marta, shortly after the news broke that the High Court of Australia had quashed the convictions against Pell.

The Vatican is understandably relieved that the final appeal of their erstwhile No. 3 in command has been successful. But the church cannot reasonably take comfort from the high court's decision because, if the cardinal's appeal had failed, they would not have taken the blame for his actions. They never do. When one priest is caught, he is simply a random "bad apple"— nothing wrong with the rest of the barrel, we're told.

Whoever translated the papal statement (accanimento, Italian; hounding, English) got the idiom just right for some. The cardinal has staunch defenders: commentators Andrew Bolt, of Murdoch television's "The Bolt Report," Greg Craven, vice-chancellor (just resigned) of the Australian Catholic University, and Fr. Glen Tattersall of Melbourne's Latin Mass parish, who are given to thunderous outpourings on the theme of witch hunt. For example, Tattersall's most recent article, "The Power of the State was Recruited to Destroy Pell."

The cardinal's supporters believe that the Victorian Police, the director of public prosecutions, the committal hearing magistrate, the unanimous jury, the county court judge, the majority of the Victorian Appeals Court, the Australian Broadcasting Commission, and sundry wrong-headed journalists and faithless liberals "had it in" for Pell. Just as they have always had it in for the Catholic Church. The same beliefs were more calmly delivered by Bernadette Tobin, director of the Plunkett Centre for Ethics and associate professor of philosophy at the Australian Catholic University. Her assessment is that Pell "is an innocent man, caught in a maelstrom of anger." As a family friend of 40 years, she says, "I know he's innocent." Loyalty to friend, spouse or offspring is admirable but often results in devastation for wife or father when the truth is revealed. Even Francis had to recant his charges of "calumny" and "scandal" when the truth about the Chilean episcopacy finally emerged.

The cardinal has detractors. They might be in the majority. By the end of 2017 nearly 5,000 persons in Australia had accused personnel of the church — mostly clerics and religious — of sexual abuse. While those are just the brave souls who have reported, that number has surely increased in the intervening years. In addition, we can add to the numbers of detractors the family and friends and neighbors and work colleagues of the complainants. They believe, just as passionately, that though the convictions against Pell have been quashed, he is not innocent. The night of the High Court acquittal, the words "Rot in Hell" were spray painted on the walls of St. Patrick's Cathedral in Melbourne. Death threats have been made against him at the Sydney seminary where he is currently staying. A maelstrom of anger, indeed.

So the church is riven by two groups: One claims it can't be possible, the other that of course it's possible because it happened to me, which is, of course, the source for the maelstrom of anger. Both groups inhabit a totally opposing mindset. The supporters all argue that the institutional church is always hounded, witness how unfairly it was treated by the Royal Commission into Institutional Responses to Child Sexual Abuse. For this group, Pell simply got caught up in this anger because he is such an outspoken conservative and divisive figure.

Pell's detractors, on the other hand all argue, in line with the findings of the Royal Commission, that the church engaged in massive crime and systemic sin in relation to the abuse of children and its cover-up. For them, Pell is at the heart of it all because of his action or inaction as a priest in Ballarat, and archbishop in Melbourne and cardinal in Sydney. At least one book has been written on the subject. The first accusation of sexual abuse by Pell was made by a young man named Phil Scott, for an incident occurring in 1961. He was believed by the investigating judge, but "there was no corroborating evidence." Similar accusations have been made every decade since then until the current charges, the locations being swimming pools, surf clubs, presbyteries, orphanages, cinemas and sacristies.

In all, 26 charges have been laid. "The Bolt Report," Sky News TV, conducted the first interview with Pell post-release on April 14, and the report noted there have been 26 accusations against Pell overall — until the Victoria Police announced they were beginning an investigation into a 27th for alleged criminal behavior relating to sexual abuse of a child in 1970s. In the current case, "multiple" charges were dismissed at the committal stage, one due to death of the accuser, another later in the proceedings. In a different case, six criminal charges were dropped when it was decided that the complainant was medically unfit to proceed, others for lack of admissible evidence, while still others will re-emerge as civil actions. For his detractors their doubts about the cardinal didn't begin with the five charges just dismissed on appeal. 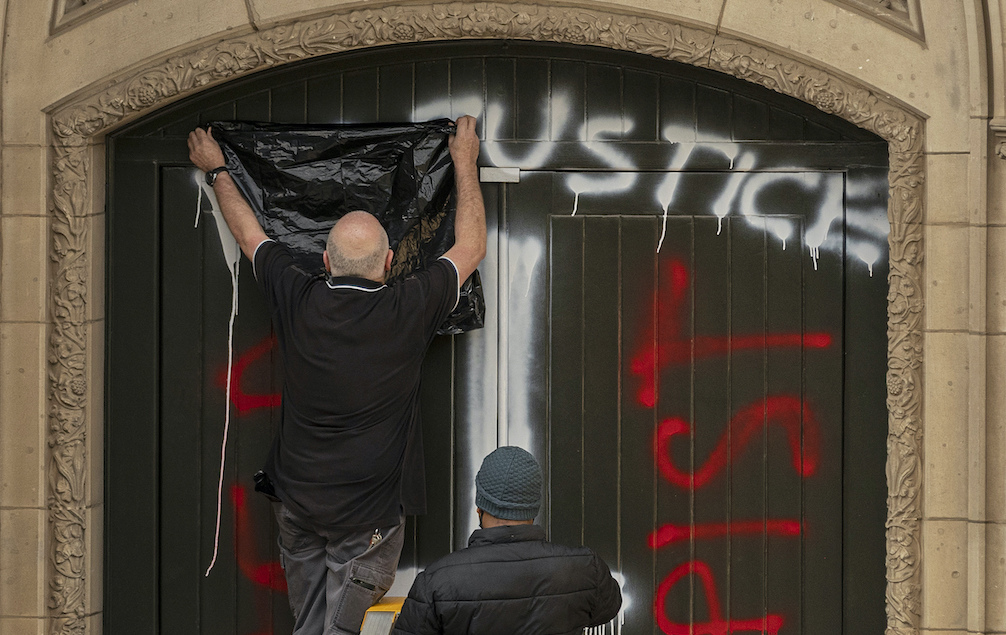 Workers cover graffiti at the entrance to St. Patrick's Cathedral in Melbourne, Australia, April 8. The cathedral was vandalized after Cardinal George Pell was released from prison the previous day; the High Court of Australia overturned the December 2018 jury verdict that found him guilty on five counts of molesting two 13-year-old choirboys in 1996. (CNS/AAP/Reuters/Daniel Pockett)

Pell has come out of prison fighting, lodging complaints about the press following his car as he drove from his Melbourne jail to Sydney, and contemplating seeking compensation for wrongful imprisonment or suing for defamation. He is entitled to do all of those things, but if he pursues that course the running sore in the body of the church will continue to fester. Today, only about 10% of Australian Catholics regularly attend Sunday Mass.

As of the time of writing, there are eight civil actions pending against Pell and the Catholic Church by people claiming to be survivors of sexual abuse. These cases will produce much bad publicity for both the cardinal and the institution, and the damages to be paid are potentially huge. It really comes down to this: Is the cardinal aiming to re-establish the church or himself?

None of this can be considered a win for the Australian Catholic Church, yet. There is a plenary council, postponed due to COVID-19, but still coming in 2021. This is the time to move beyond the life and times of Pell. There is a window here to focus on renewal and reform, and it would be wise for the bishops' conference to be seen to be doing it before the civil actions against the cardinal find their way into the courts and the media.

If the bishops would lead by letting go of power and control, have faith in the faithful, allow us to be part of the selection of our parish priests and bishops, and use all the theological degrees owned by the laity to reform the seminary training to reflect the world of now. Never mind the inclusion of women into the permanent diaconate and the priesthood; even the pope is speaking of the evils of clericalism. Of most immediate importance is the need for a nationwide protocol for the reporting of sexual abuse, run only by lay people, for the protection of children and vulnerable adults.

It would arguably be a far, far better thing for the Australian Catholic Church if Pell took his resounding victory and slipped quietly into the shadows. At least until such time as he will have to sit, not this time in the dock, but at the bar table with his lawyers as the multiple civil actions are processed. Because as he has said himself, somewhat opaquely, on his release: "The only basis for long term healing is truth and the only basis for justice is truth, because justice means truth for all."

We have yet to discover where the whole truth lies. As Oscar Wilde said, the truth is rarely pure and never simple.

[Gail Grossman Freyne, LL.B., Ph.D, lives in Australia. She is an author, psychotherapist and mediator. Her most recent book is The Curious Case of Inequality: A Journey for Justice with Dorothy L. Sayers (ATF Press: 2017).]