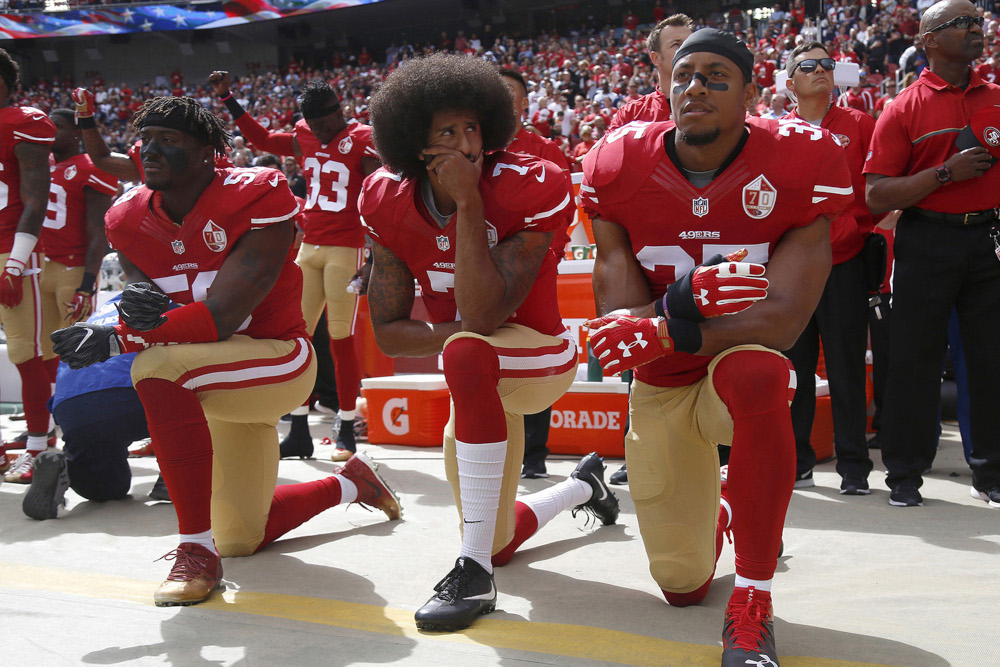 From left, Eli Harold, Colin Kaepernick and Eric Reid of the San Francisco 49ers kneel during the national anthem before a game against the Dallas Cowboys on Oct. 2, 2016, at Levi's Stadium, in Santa Clara, California. (Newscom/TNS/Bay Area News Group/Nhat V. Meyer)

When the kneeling protests led by former San Francisco 49ers quarterback Colin Kaepernick began in 2016, like many other Catholic school superintendents, I scrambled to respond. In the first year, the protests drew attention but our Montana Catholic schools weren't impacted. In the fall of 2017, however, the protests became highly politicized, it was hard to ignore. I wrote a blog piece in Catholic School Matters and sensed a growing anxiety about the protests.

For most of our Catholic schools, the responses were local. Figure out what your community needs and how to tailor a response to your school, school leaders were advised in the spirit of subsidiarity.

But I didn't hear then and I can't find anything now that is a clear statement of support from any bishop or superintendent. There were no kneeling superintendents or bishops, no public statements of support for Black Lives Matter.

We were wrong. It's time to change the narrative about the protests.

The narrative was corrupted from the beginning. When Kaepernick began his protests, he sat down. But after meeting with NFL player and veteran Nate Boyer, he decided that kneeling would show respect for the flag while still drawing attention to police brutality and racial injustice. It's important to note that Kaepernick's words define his action. Yet his protest has (wrongly) come to be defined as anti-American, anti-flag, disrespectful toward the military and first responders, etc. President Donald Trump has been the agitator-in-chief leading the charge to define the kneeling protests as disrespectful up to the present moment.

Words matter. Kaepernick took a stand and told us why. We didn't believe him. We, Catholic school leaders and bishops, overwhelmed by the outcry of our white alumni and parents, opted to not make any statements of support for the protests. We had alumni and donors threatening to pull their support for the schools. With our schools and dioceses so strapped for funds, those threats are heard.

Let's consider two scenarios. First, as sports journalist Bill Simmons imagined, how would people have reacted if Kaepernick kneeled to promote breast cancer research? Do you imagine it would have drawn condemnation? Of course not. After all, in most situations kneeling is seen as a sign of reverence. Why did kneeling in this situation come to be seen negatively?

Second, how would the church have reacted if the protests would have advocated for the end to abortion? Would we allow each individual school to respond? Of course not. There is no ambiguity and no need for subsidiarity. But when actions and reactions garner racist reactions, we defer to local customs and norms.

Stop it. We need to claim our moral authority and lead our church to a better future.

Turned out, Kaepernick was right to protest. As we have seen the protests swell these past weeks, it occurs to me that we lost a few years by not acting. Our responsibility as a school system is to educate all of our students about injustices in order to form better citizens. Kudos to Chicago Cardinal Blase Cupich for mandating that all Catholic schools will teach about George Floyd and racial justice. We have a criminal justice system that is treating African Americans with disproportionate cruelty and our students deserve to know this in their classes and they deserve to hear from our Catholic school leaders and bishops.

Our responsibility as a school system is to educate all of our students about injustices in order to form better citizens.

There have been consequences to our inaction. Two years after their diocesan policy outlawing kneeling, an outcry at Camden Catholic High School led to an exodus of African American students from the school due to perceived unfair treatment of African Americans. It is certainly possible that resentment over the kneeling ban contributed to the walkout. At Lansing Catholic, they changed their policy in 2018 after protests continued and the diocese formed a Task Force on Race and Catholic Schools, which issued a final report in 2019. The diocese was under fire for unequal treatment of African Americans and had to work very hard to rebuild trust.

Pope Francis had a great reflection on leadership in his apostolic exhortation, Evangelii Gaudium (Joy of the Gospel). A shepherd sometimes leads from the front, showing the way. However, it's easy to lose track of the straggling sheep. If you lead from the back, you'll catch the stragglers and respond to every crisis, but there won't be a clear direction for the flock. If you lead from the middle, however, you can walk alongside the sheep and work toward influencing the direction and catching all the sheep.

For too long, our church and schools have led from the back, allowing the prejudices and institutional racism of our society to dictate the direction. We need to get out front and lead.

We were wrong. It's time to make things right. Whenever sports comes back, you'll find me kneeling alongside our students drawing attention to injustice.