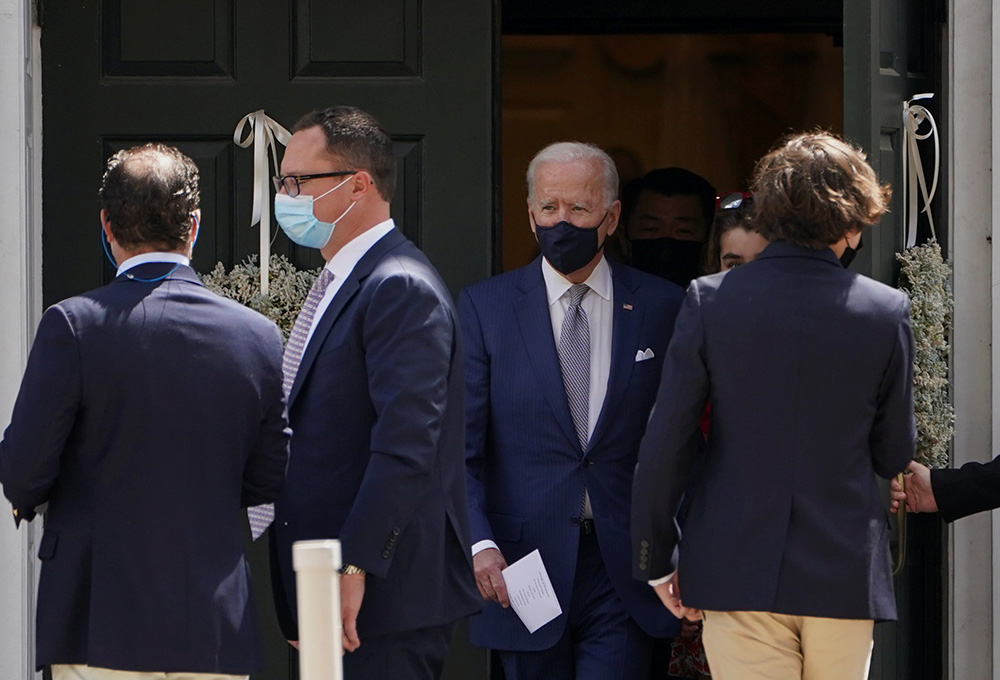 President Joe Biden departs church after the confirmation of his grandson Hunter at St. Joseph on the Brandywine Catholic Church in Greenville, Delaware, April 18. (CNS/Reuters/Kevin Lamarque)

The U.S. Conference of Catholic Bishops will meet in June, its first meeting since Joe Biden became America's second Catholic president. Some bishops are urging a committee of the bishops to draft a document for consideration by the conference that could direct the withholding of Communion to the president and other Catholic political figures who are deemed insufficiently supportive of church doctrine on human sexuality.

The die was cast for such a potential confrontation at Biden's inauguration. While millions of Catholics watched that day with pride, Los Angeles Archbishop José Gomez, the bishops' conference's president, issued a statement challenging the president's views on "abortion, contraception, marriage and gender," although other bishops questioned Gomez's ad hominem rebuke.

When the bishops convene in June, Vatican rules suggest that no binding position for the American church will be embraced unless two-thirds of the assembly agrees — and it still needs Vatican approval, which it is unlikely to get.

Still, even an unsuccessful effort to mandate the withholding of Communion from American public officials could lead more bishops and priests to freelance and deny Communion in their own dioceses and parishes.

Related: After Vatican warning, US bishops have limited options for planned text about Biden

As a Catholic senator, I was not surprised by the inaugural attack on Biden. I've seen this tension in my own public career, working closely with my own bishops and the conference on many items but also disagreeing over laws regarding abortion, contraception and LGBTQ equality. Recently, I cast a vote in favor of the Hyde Amendment, restricting any federal funding for abortions except in the limited instances of rape and incest, or to protect the mother's life. But I did not follow the bishops' recommendation that I vote against the entire American Rescue Plan because it lacked Hyde language.

Every day brings these challenges whereby Catholics in public life wrestle with our own consciences, the demands of representing diverse constituencies, and legislation often filled with real benefits for needful Americans mixed with other provisions that are not ideal. These struggles are not unique to Catholics — everyone in public life grapples with the same questions.

Just as I don't believe Catholic clergy should dictate how I do my job representing a pluralistic society, I don't presume to suggest what church doctrine should be. But I offer a simple suggestion: The American hierarchy should heed the words of Pope Francis and recognize Communion as an opportunity for healing rather than an occasion for judgment.

In a civic sense, the same First Amendment that protects the rights of American Catholics to believe and worship as we choose also protects others who resolve moral questions differently based on their own faith and ethical deliberation. And there are few moral issues more personal and fundamental than those concerning human sexuality. Different faiths have different views about Gomez's four preoccupations.

Of course, any church can set conditions on the behavior of its members. So Biden and most of us do our best, as imperfect people, to follow church rules in our own daily lives. But bishops demanding that Catholics in public life not only live according to church doctrine but additionally shape the law, even to include the threat of criminal prosecution and punishment, to enshrine church doctrine on sexuality as mandatory for all Americans is contrary to our basic liberty. Why would government require that Catholic sexuality doctrine, or Sharia law, or Orthodox Jewish rules about Sabbath observance, be followed by all?

Turning to the spiritual dimension, a decision by U.S. bishops to elevate issues of human sexuality, however important, above all others seems contrary to the Gospel. No reading of the life of Jesus would suggest these issues as his primary, or even secondary, concern. His towering message is about love of neighbor as oneself with a special focus on the poor, sick, hungry, marginalized.

It would represent a narrow and impoverished reduction of Jesus's ministry to withhold Communion to politicians purely because of their voting record on marriage, contraception, abortion or the treatment of LGBTQ people. Such a resolution would be much more political act than expression of faith.

But I am most concerned by the bishops' flirtation with redefining the meaning of the sacrament itself. Every priest or bishop celebrating Mass anywhere in the world, and every Catholic parishioner attending Mass, says these profound words immediately before receiving Communion: "Lord, I am not worthy that you should enter under my roof, but only say the word, and my soul shall be healed."

Bishops contemplating a declaration that some public officials are unworthy to receive Communion should recall that, by church doctrine, no one is worthy to receive Communion, even those in the hierarchy who administer it! None of us is worthy, but through the grace of God, we seek the sacrament to be healed and grow stronger in our faith. A decision to deny Communion to some public officials would convert a sacrament of, by and for the unworthy into an indulgence, whereby a self-elevated clergy decides who to confer with favor at the altar.

I return to Francis (echoing St. Ambrose and St. Cyril of Alexandria): "The Eucharist, although it is the fullness of sacramental life, is not a prize for the perfect but a powerful medicine and nourishment for the weak."

The theology of Communion begins with an acknowledgement of weakness. Biden, all Catholic politicians, all who worship as Catholics and the Catholic hierarchy itself need the "powerful medicine" that the sacrament provides. If we believe the words we say as we receive Communion, why would we transform the spiritually healing moment into yet another earthly and divisive one?

This story appears in the Bishops, Biden and Communion feature series. View the full series.
A version of this story appeared in the June 11-24, 2021 print issue under the headline: A Catholic senator's view on Biden and the bishops.