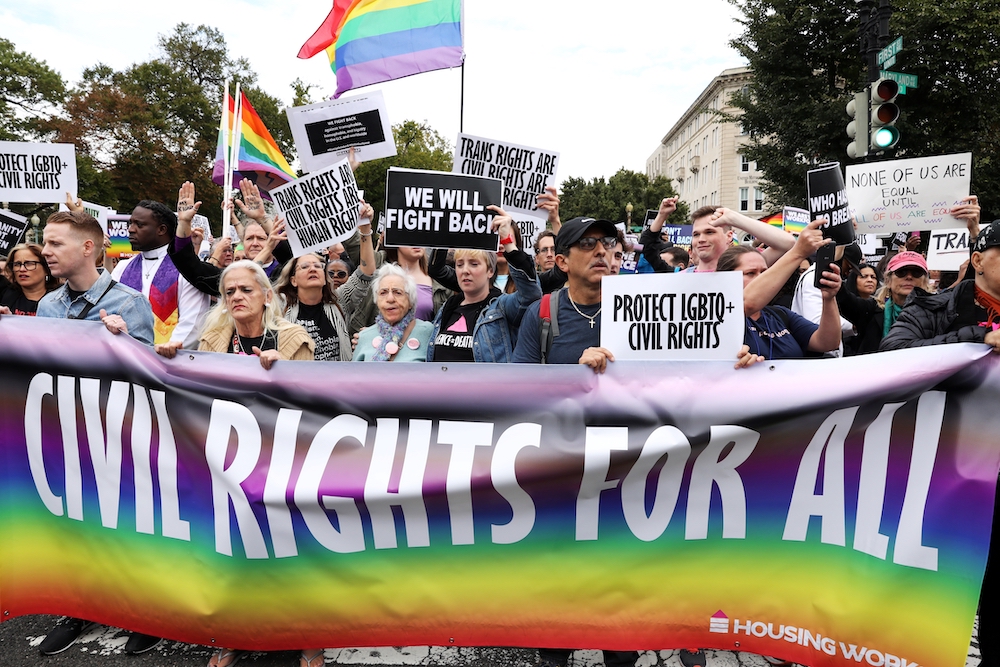 Activists and supporters block the street outside the U.S. Supreme Court in Washington Oct. 8, 2019, as it hears arguments in three major employment discrimination cases on whether federal civil rights law prohibiting workplace discrimination on the "basis of sex" covers gay and transgender employees. (CNS/Reuters/Jonathan Ernst)

For the second time in U.S. history, a Catholic person has been elected to lead the highest office in the land. The U.S. Conference of Catholic Bishops has been readying itself to collaborate with President Joe Biden wherever possible, while challenging the areas where the church's position might differ. Biden's record shows he highly values Catholic social teaching, and it is in social teaching that we will find common ground.

As a lay minister and leader in inclusive LGBT ministry, I believe this presents a valuable opportunity for Catholics to discern how we can push — and collaborate with — the Biden administration to build a common future that includes sensible policies toward LGBTQ persons, a part of the body of Christ.

During his papacy, Pope Francis has made several positive remarks about LGBTQ persons that have shocked the world. Without changing any doctrine, he has emphasized a welcoming approach and has encouraged pastoral care of LGBTQ persons that is inclusive. With his own example, Francis has also encouraged Catholics to approach LGBTQ persons with a merciful heart, to listen to their lived experience and to start a process of discernment on this topic.

LGBTQ persons are, have been and continue to be a vulnerable group, a part of the body of Christ that is hurting. While only 7% of youth in America are LGBTQ, as many as 40% of homeless youth are LGBTQ. LGBTQ youth are 120% more likely to experience homelessness than non-LGBTQ youth. This high level of homelessness is the result of family rejection, abuse and poverty. Once homeless, LGBTQ youth are also at an increased risk of being targeted by human traffickers.

Family rejection is detrimental to the overall emotional, physical and mental wellbeing of LGBTQ persons. Even if an LGBTQ person does not experience homelessness or family rejection, they are still likely to experience discrimination in housing, education, employment and healthcare, which impedes their ability to "attain and maintain economic security" in the long run. In the worst of cases, LGBTQ persons are still targets of hate crimes and killings. Much of this pain could be prevented if sensible policies are enacted.

Catholic social teaching's principle of the dignity of the human person tells us that all human beings are created in God's image and likeness regardless of race, sex, age, national origin, religion, sexual orientation, employment, economic status, health, intelligence, achievement or any other differentiating characteristic. Because we are all created in God's image and likeness, we all possess an innate human dignity that must be acknowledged and respected.

The successful application of this principle revolves around one operative word, the word person. We cannot treat someone with dignity unless we treat them as persons, full human beings made in the image and likeness of God. We are all more than just our sexual orientation, identity, race, religion or any other differentiating characteristic. LGBTQ persons are full persons born with God-given gifts, with full capacity for self-knowledge and self-determination, with virtues and shortcomings, with life goals and spiritual yearnings, with interests and needs beyond sexual orientation and identity, born in community and with full dignity that must be respected.

LGBTQ persons are dehumanized when we frame their lives and life experiences solely as a political agenda, when we fail to see the human being in front of us and to recognize their needs. In the parable of the good Samaritan, Jesus tells the story of a man assaulted by thieves, a man in need of care and protection. Several persons saw him, yet they failed to truly see him, to recognize his need, and they failed to care.

Policies that allow everyone to see LGBTQ persons, to recognize their need and to care for their wellbeing should be encouraged. Biden has promised to account for LGBTQ people in all federal data collection such as the census and the American Community Survey. This is one way in which we can start seeing LGBTQ persons and their needs, as the lack of data is often the first problem in addressing policy that tends to the needs of the LGBTQ community. A change in rhetoric and tone from the highest office in the land will also be essential in recognizing the humanity of LGBTQ persons.

It is also necessary to restore U.S. leadership on LGBTQ issues. One way to do this is by restoring the special envoy for the human rights of LGBTI persons that promotes the recognition of LGBTQ human rights across the world. With inhumane bill proposals such as Uganda's "kill the gays" bill reappearing periodically, American leadership becomes essential in promoting human rights across the globe. The church, with its international presence, also has a unique opportunity to be prophetic in speaking out against this type of incitement to violence.

Biden should also create an office of LGBTQ affairs to promote awareness of the needs of the community and should appoint LGBTQ federal officials and judges whenever possible to increase visibility, participation in government and representation.

Closely tied to the principle of dignity is the principle of respect for human life. All life is sacred from the moment of conception until natural death. Killings motivated by the orientation or the gender identity of LGBTQ persons are seldom accounted for and seldom prosecuted as a hate crime. 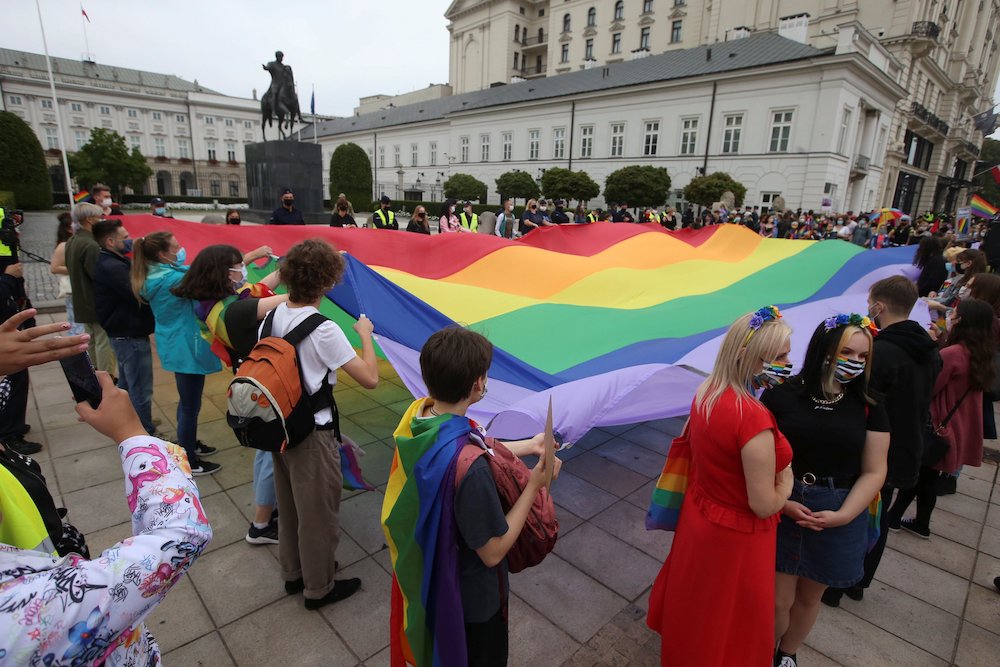 Demonstrators hold a giant rainbow flag during a protest against hatred toward LGBT people in Warsaw, Poland, Aug. 30, 2020. (CNS/Agencja Gazetas via Reuters/Kuba Atys)

Transgender people, in particular, suffer even more discrimination, violence, social marginalization, economic marginalization and abuse, with transgender women of color being more likely to be murdered in the United States and worldwide. The LGBTQ Essential Data Act would improve data collection that can help determine leading causes of violent death among the LGBTQ community. In addition to collecting data, Biden has committed to directing federal resources to prevent violence against transgender women and prioritize prosecutions against offenders. Increased funding for anti-bias and hate crime investigation training is also a must.

A consistent life ethic, however, requires more than that. Respect for human life goes beyond the act of defending the right to be alive in support for a right to a dignified life, such as making sure people — especially the poor and vulnerable — have adequate access to health care, housing and coverage of basic needs. As such, any and all federal rules that make it possible for federally funded entities — such as homeless shelters — to discriminate against LGBTQ persons must be reversed.

The church also recognizes that hatred, harassment and discrimination of LGBTQ persons must not be tolerated and that "every sign of unjust discrimination in their regard should be avoided," as it says in the Catechism of the Catholic Church (#2358).

Based on these two principles, Catholics should be able to encourage Biden to pass comprehensive nondiscrimination protections for LGBTQ people in employment, housing, credit, health care and education. The Equality Act does such a thing.

LGBTQ persons are a vulnerable group, but we often fail to recognize the vulnerability because we have failed to walk close enough beside them, and we have failed to listen to their life experiences the way Jesus would.