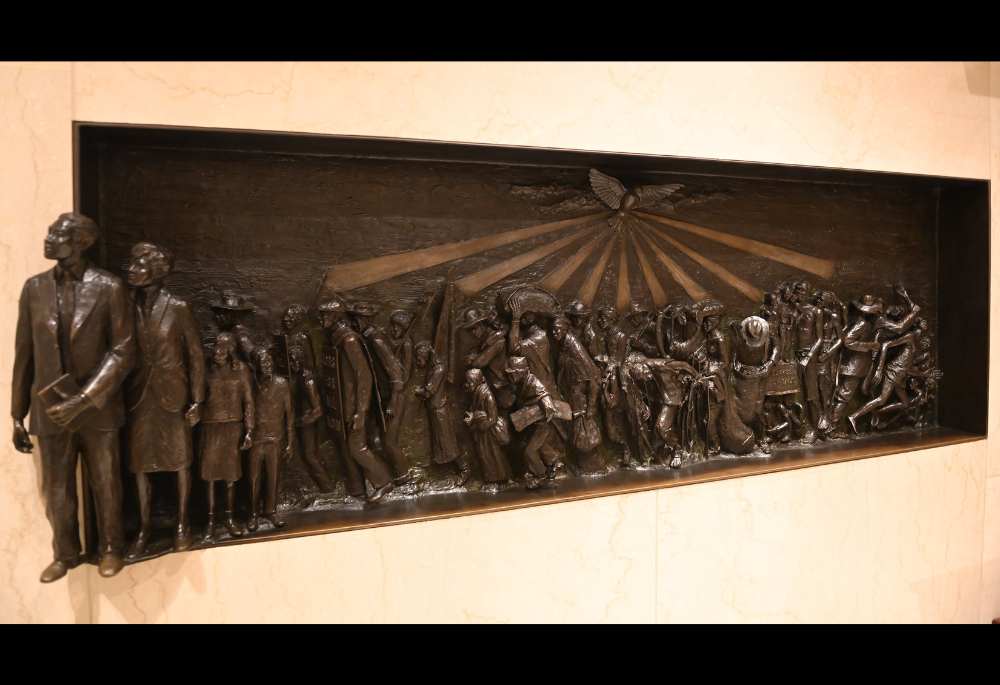 A bas relief sculpture seen Sept. 17 on the wall of the Our Mother of Africa Chapel at the Basilica of the National Shrine of the Immaculate Conception in Washington depicts the African American experience from slavery to emancipation and the civil rights movement. The figures are guided by the Holy Spirit, seen above in the form of a dove, as they marching toward Jesus on the cross, symbolizing ultimate freedom. (CNS/Patrick Ryan for the National Black Catholic Congress via Catholic Standard)

That was a catchphrase for the 1961 Freedom Rides. And it also is a current call to pilgrimage.

Recently, I returned from what is called a Sankofa Journey that is hosted by the Love Mercy Do Justice initiative of the Evangelical Covenant Church. It is a four-day, prayer-filled visit to civil rights sites in the South that also includes relationship building and reflection as individuals, partners, and small and large groups. Although most Catholics have probably never heard of them, this denomination is engaged in some of the most effective work in racial justice in the U.S. today.

The Evangelical Covenant Church calls this an "immersive discipleship experience" and it's similar to what we Catholics call a pilgrimage. It is four days where the participants leave ordinary time and enter into a liminal space where transformation can occur through journeying as a community in God's presence. The idea is that God has been, is and will continue to be working for racial justice and reconciliation. And this discipleship journey is a deep dive into both the horrific evils wrought by white supremacy over the past 400 years, and the countless creative ways in which people, mostly Black people and some white accomplices in the South, have flowed with God's Spirit for resistance, liberation and a measure of salvation in this world.

In a way, the journey is an entrance into the paschal mystery, especially Good Friday and Holy Saturday. Similar to the Freedom Rides, the mode of transport is a bus and each participant must be paired with a partner of the same gender but different racial background for the four-day journey. Through visiting the National Center for Civil and Human Rights in Atlanta, the Equal Justice Initiative's Legacy Museum: From Enslavement to Mass Incarceration (which caused me a full-body lament, aka, ugly crying and wailing), and the National Memorial for Peace and Justice in Montgomery (aka, the national lynching memorial), my fellow sojourners and I followed the Via Crucis and descent into hell that African peoples were forced into as they were stolen and racialized into enslaved property.

We followed the boundary crossing among suffering, death and new life that Christ demonstrated in the paschal mystery as we engaged in a prayer walk across the Edmund Pettus Bridge in Selma that spans the Alabama River. This was the ground for Bloody Sunday, Turnaround Tuesday and the starting point for the subsequent successful march from Selma to Montgomery that eventually spurred the passage of the 1965 Voting Rights Bill. 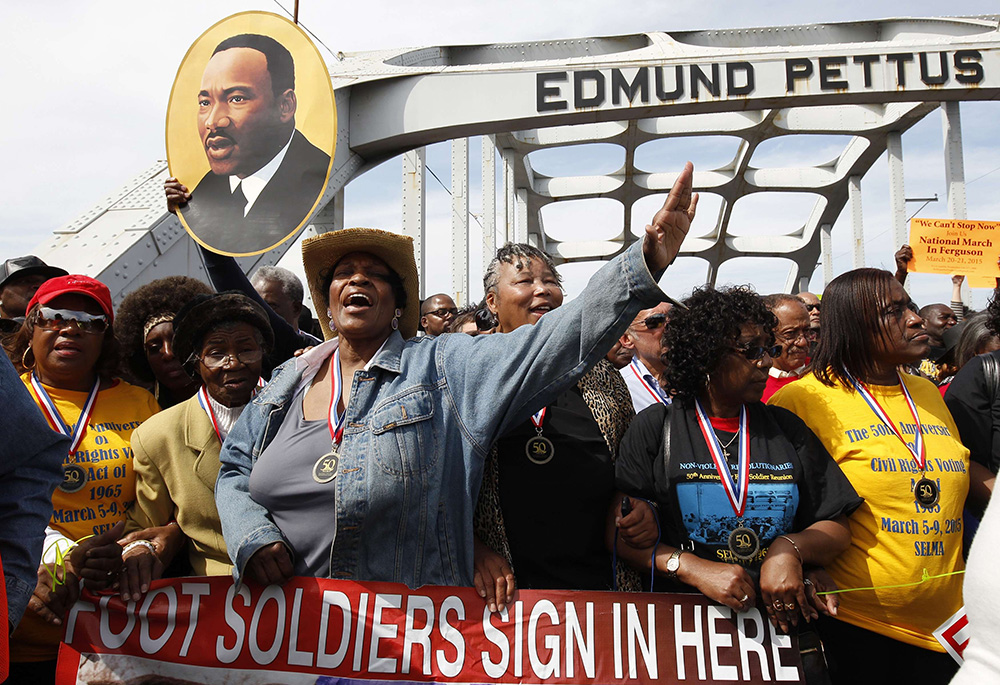 Dorothy Tillman Wright, center, one of the original "foot soldiers" who marched on Bloody Sunday in 1965, shouts March 8, 2015, during a prayer on the Edmund Pettus Bridge in Selma, Alabama. Wright was among thousands who participated in a commemoration of the 50th anniversary of the civil rights marches from Selma to Montgomery, the state capital of Alabama. (CNS/Reuters/Tami Chappell)

Similarly, walking through Kelly Ingram Park in Birmingham, Alabama, was a kind of Stations of the Cross that commemorates the trials and tribulations freely undertaken by Black men, women and mostly young people and children to break the back of segregation. The participants in the nonviolent movement did so voluntarily and were trained in the hard discipline of nonviolent resistance as a "weapon of love" that could disarm the oppressor and in which freely undertaken, innocent suffering was known to have a redemptive quality to it.

The suffering hastened the federal government to pass the Civil Rights Act of 1964. And then came the memory of crucifixion, while visiting 16th Street Baptist Church, where four little girls were murdered as a bomb planted by white supremacists detonated at the east side of the church in 1963. Later that same day, in the same city, two Black teenage boys were shot to death.

The next stop was Memphis, where Dr. Martin Luther King Jr. gave one of his most powerful sermons, "I've Been to the Mountaintop," and was assassinated at the Lorraine Motel, which is now the National Civil Rights Museum. The day ended with a tour of Black Memphis that included a stop at Slave Haven, a station in the underground railroad that is a museum telling the story of the long history of resistance by enslaved Africans against their white enslavers.

Then, since the Freedom Riders in 1961 could not stop anywhere to rest, we slept on the bus for the long drive from Memphis back to Atlanta. We finished the journey in the church where we began — with prayer, sharing a final meal and offering final reflections.

Too many white Catholics do not want to encounter the terrifying magnitude of the wound inflicted by "those who think they are white" (to use a phrase from James Baldwin) against all others in the racialization process that went part and parcel with enslavement and colonization. The horrors of the enslavement of African peoples in the transatlantic slave trade and the subsequent domestic political economy thoroughly beholden to and disfigured by this evil, paired with the genocide of Native peoples, has left us all disfigured and wounded, albeit in different ways.

A paschal pilgrimage, prayerfully in an ecclesial community, that retraces the path of those who were forced into centuries of torture, crucifixion and hell on earth, is not easy. But it is one way of letting God's Spirit flow where it will and learning to become Christ's hands and feet in the world. And, yes, there is the hope of the resurrection and empowerment for participating in God's ongoing work of racial justice in it all.

For the paschal mystery is a story in which ultimately God triumphs over evil, despite all evidence to the contrary. But the triumph occurred in a way that no one expected and that created a new future for anyone who freely chose to follow Christ.

The hour is late, the effects of great sin that has bred evil are tearing us apart as a nation, as communities, as a religion, as families and as disciples of Christ. Yet we are called to remain faithful to the triune God of Jesus Christ in such times and to one another in Christ's name. We as Christians are called to become small sacraments of salvation in this world.

So, what are we to do? How are we to do it? Open our eyes to the racialized lives we lead.  Embrace the yoke, offered by Christ, of anti-racist discipleship and practice. Follow a "little way" to subvert white privilege with fellow sojourners as an ecclesial community within your context. Trust that God will be with us as we enter into this paschal mystery of racialized suffering.

And, above all, get on the bus.