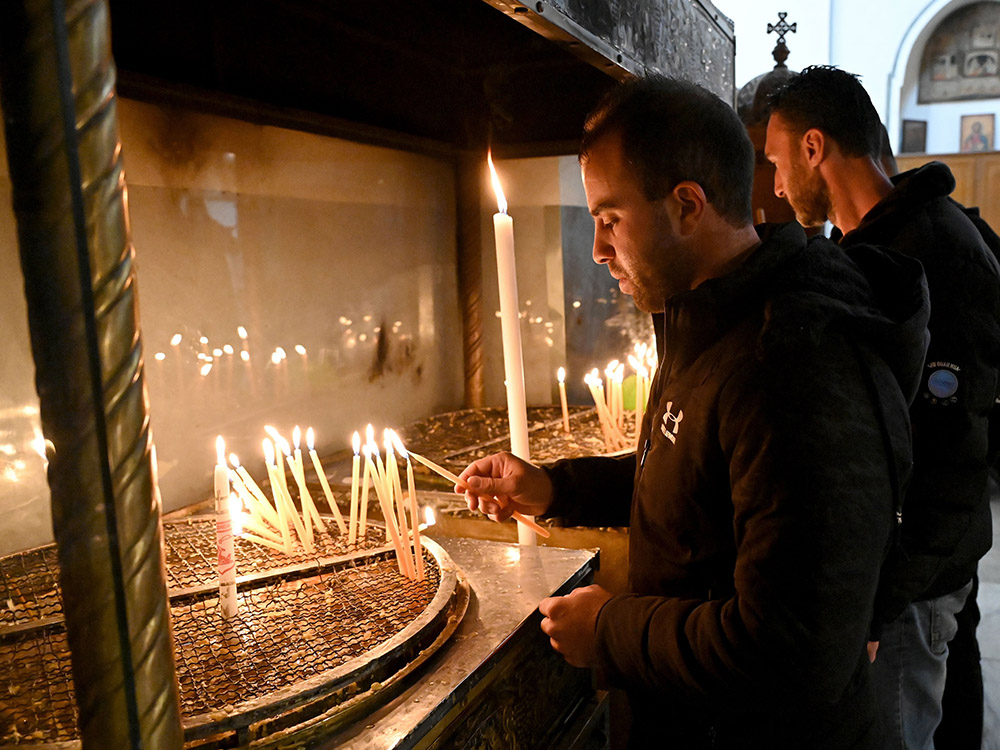 Palestinian Catholic Andrew Bannoura from Bethlehem lights a candle in the grotto of the Church of the Nativity in Bethlehem, West Bank, Dec. 15. (CNS/Debbie Hill)

As Christmas approaches, our hearts naturally turn toward Bethlehem. As was true at the time of Christ's birth, Bethlehem is an occupied city. This time it is not occupied by Romans, but rather by the modern state of Israel. Bethlehem lies in the occupied West Bank that was captured by Israel in the war of 1967.

I have visited Bethlehem many times. The visits were always both sobering and joyful experiences. Sometimes passage through the imposing security barrier or separation wall that divides Bethlehem from Jerusalem, a scant 6 miles away, was relatively routine. At other times, it was harrowing, as armed Israeli soldiers boarded our bus or required us to take a circuitous route through armed checkpoints into David's City.

Of course, the journey always had its joyful aspects: the visit to the Church of the Nativity and meetings with the local Palestinian Christian community. The resilience of the Christian community in Bethlehem and throughout the Holy Land awed me.

During the recent November 2022 plenary assembly of the U.S. Conference of Catholic Bishops, Patriarch Pierbattista Pizzaballa addressed the full body of prelates. The remarks and presence of the Latin patriarch of Jerusalem were not widely reported. The press release that recapped the meeting made no reference to the patriarch. After the assembly, the bishops' official account tweeted an "in case you missed it" video of the patriarch's remarks.

The patriarch's public address to the bishops' gathering was pastoral in tone and content, and focused on the "reality of the Holy Land." His talk was also a blinking red light of the dangers facing the Christian community and the deteriorating politics of the Israeli-Palestinian conflict.

Pizzaballa observed that Christians are about 1% of the population now (down from about 10% in 1948). The main reason for the continued decline in the Christian population is the lack of economic opportunity, a consequence of the political situation.

The patriarch argued that the declining presence of Christians is making it more and more difficult to make the "Christian character" of the Holy Land visible.

Pizzaballa bemoaned the lack of Israeli-Palestinian peace negotiations and of prospects for such talks. He said the failure of past "so-called agreements" has led to a lack of trust needed for negotiations to succeed. 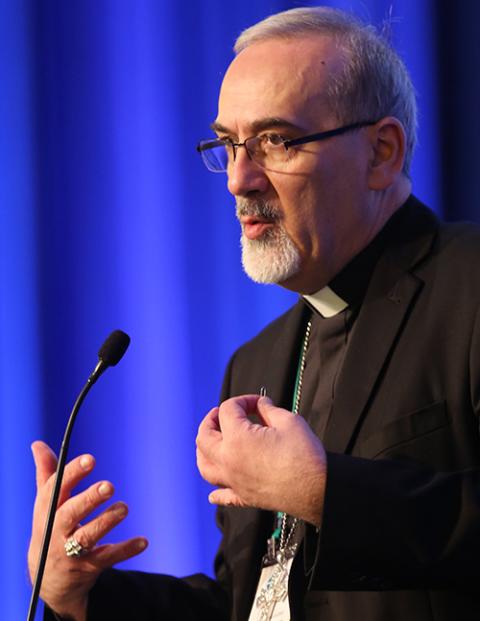 Archbishop Pierbattista Pizzaballa, Latin patriarch of Jerusalem, speaks during a Nov. 16 session of the fall general assembly of the U.S. Conference of Catholic Bishops in Baltimore. (CNS/Bob Roller)

He contrasted the fact that Palestine has not had a presidential election since 2005 with the reality that Israel has had five elections in less than four years.

The patriarch was candid about the weakness of the Palestinian side as a negotiating partner. He described the incoming Israeli government as the most "right-wing" government in Israel's history, with Benjamin Netanyahu, a staunch conservative and the likely future prime minister, being considered the most moderate partner in the coalition. Pizzaballa singled out the existence of "very right-wing religious Zionist parties." This rightward tilt has potentially catastrophic consequences for Israelis and Palestinians, and for the church in particular.

The patriarch declared: "The future of Jerusalem is not a Jerusalem for Jews, or for Muslims, or for Christians, but to be the city where Jews, Christians and Muslims are at home with the same rights."

He closed imploring the bishops "not to forget Jerusalem." The church in the United States must not forget the Mother Church of Jerusalem.

The context of the patriarch's remarks to the U.S. bishops is significant. Last December, the Patriarchs and Heads of Local Churches in Jerusalem issued a statement on the "Current Threat to the Christian Presence in the Holy Land."

The statement began with this sweeping declaration: "Throughout the Holy Land, Christians have become the target of frequent and sustained attacks by fringe radical groups."

The church leaders cited "physical and verbal assaults" on clergy, attacks on churches, vandalization of holy sites, "intimidation" of local Christians, "underhanded" property transactions to displace Christians from the Christian Quarter of Jerusalem, and disruption of the "historic pilgrim routes between Bethlehem and Jerusalem."

"These tactics are being used by such radical groups in a systematic attempt to drive the Christian community out of Jerusalem and other parts of the Holy Land," they said.

The statement did acknowledge the "declared commitment of the Israeli government to uphold a safe and secure home for Christians in the Holy Land," but noted the "failure of local politicians, officials and law enforcement agencies to curb the activities of radical groups." These are the "right-wing" radicals, settler and extreme Zionist groups to which the patriarch alluded.

Vatican News reported on the statement under the headline "Church leaders warn against threat to Christian presence in Holy Land." The Vatican article singled out the public support for the besieged church in the Holy Land offered by the World Council of Churches and the U.S.-based Churches for Middle East Peace.

Since the threat to the Christian presence was named a year ago, there have been other high-profile incidents. The Patriarchs and Heads of Local Churches in Jerusalem condemned:

This Dec. 12, the Assembly of Catholic Ordinaries of the Holy Land issued a statement expressing their concern "about the gradual deterioration of the general social and political situation in the Holy Land."

The last time the U.S. bishops issued a statement on Israel and Palestine was in May 2021. The chairman of the Committee on International Justice and Peace responded to the eruption of violence near the Al-Aqsa compound in Jerusalem, located on the Temple Mount. The bishops' statement called for "upholding the Status Quo of the Holy Places" and affirmed the "equal dignity of every people."

Shortly after the bishops' November 2022 assembly, there was a brief reaffirmation of support for a "just political solution — a secure and recognized Israel living in peace alongside a viable and independent Palestine" in a statement by the Committee on Ecumenical and Interreligious Affairs on the Jewish community and antisemitism.

The Christians of the Holy Land need the church in the United States to urge our government to insist that Israeli authorities confront the actions of radical actors and extreme settlers who threaten both the Christian presence and the possibility of a just peace. Only then can Jews, Christians and Muslims prosper together in the land that is sacred to all three faith communities. Only then can Israelis and Palestinians achieve a just peace that respects the rights of all.