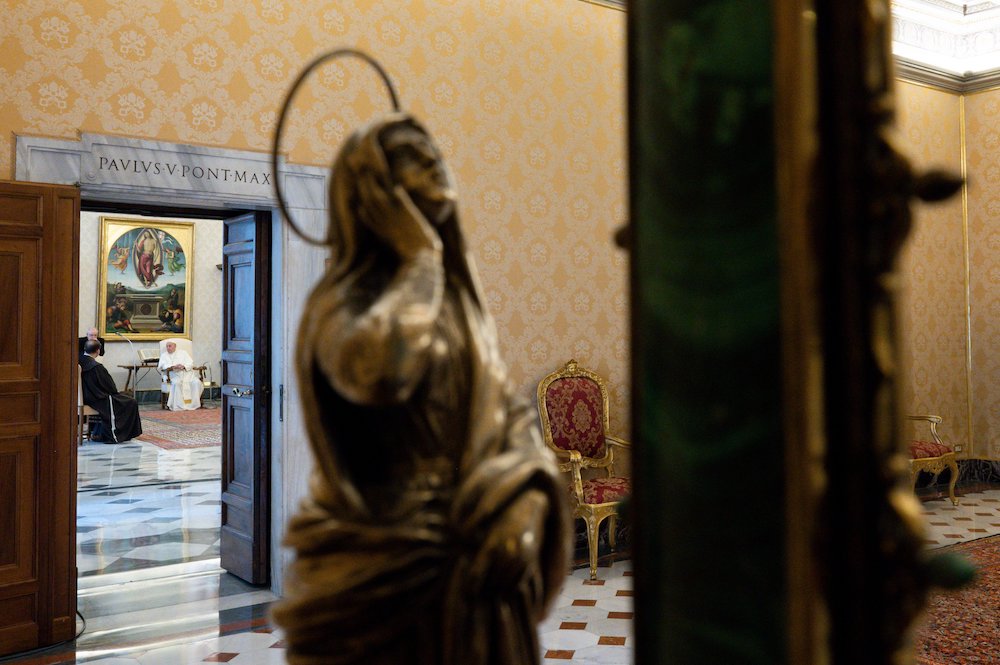 Pope Francis leads his general audience in the library of the Apostolic Palace at the Vatican Nov. 4. The weekly papal audience returned to being closed to the public as COVID-19 cases increase in Italy. (CNS/Vatican Media)

A couple weeks ago, we learned that the pope supports same-sex civil unions. This is good news for LGBTQ Catholics and their allies, even though the Vatican Secretary of State has since clarified that the pope's words were spliced out of context. Whatever the final outcome, I release a sigh of consternation every time Pope Francis speaks about LGBTQ issues. I know there will be a blizzard of pundits — some secular and some religious, some smart and some not-so-smart — interpreting his words according to their own ideological predispositions.

Those who dislike the pope will probably dislike what he has to say; those who admire him will probably be full of praise. LGBTQ people rejoice when Francis seems to take their side; traditionalists celebrate when he toes the party line. It's all well-rehearsed by now.

More problematically, however, everyone reads the pope's words as if they are tea leaves revealing the future of LGBTQ Catholics. The survival of queer folks appears to depend on what comes out of his mouth.

Now, don't get me wrong. My own work in LGBTQ ministry and advocacy has profited a great deal from the cottage industry that has sprung up around papal commentary. But the perennial brouhaha around Francis's public statements on LGBTQ issues, whether from progressive or traditionalist quarters, strikes me as wrongheaded and dangerous for a number of reasons.

First, it obscures Francis' own track record on LGBTQ issues. As others have pointed out, the Holy Father's support for civil unions goes back nearly a decade to his time as the Archbishop of Buenos Aires. So, too, does his opposition to same-sex marriage. His opinions on civil unions (or any number of LGBTQ issues) should come as no surprise in 2020.

Neither are his words divine revelation. Rather, they are a pragmatic and pastoral response to rapidly-changing social and religious mores. Francis is a man of his age, an Argentinian Catholic patriarch who is both enabled and limited by his understanding of the world.

Second, an obsessive focus on Francis turns our attention away from the rest of the church. Catholicism is rife with clericalism, an abusive and manipulative religious culture that privileges the perspectives of a few ordained (men) over the church's many lay members. This leads to a warped understanding of the body of Christ. With so much attention paid to the head, we have lost our ability to perceive what other parts of the body feel.

In the United States, for example, 61% of run-of-the-mill Catholics support same-sex marriage. To our own peril, Catholics often disregard this sensus fidelium, the church's collective sense of discernment as understood and expressed through all of its members. We turn away from the complexity and beauty of God's work among ordinary believers for the naïve yet malignant belief that God speaks more through the powerful and famous.

When we only talk about the pope, we also forget about the struggles that grassroots LGBTQ Catholics face showing up to Mass every Sunday. It is impossible to recognize how God is moving in families and parishes to purge the church of its homophobia and transphobia if we are constantly preoccupied with the Holy Father.

Indeed, the church's ongoing conversion to the affirmation of LGBTQ dignity is a grace that originates among the prophetic, if marginalized and often-excluded, LGBTQ people of God. As Latin American liberation theologian Jon Sobrino made clear, "There is no salvation outside the poor."

It is a fool's errand to place our hope in Pope Francis.

A third reason stems from my own experience as a gay Catholic. For years, I have struggled to love and accept myself as much as I trust that God loves and accepts me. For the most part, church teaching and bishops' rhetoric have been a hindrance, rather than a help, to my pursuit of spiritual and sexual wholeness.

Over time, however, I have discovered and taken back the power that I once gave them to define my sexuality as "intrinsically disordered." Oppressive religious authorities cannot stop me from experiencing the love and holiness of intimate same-sex relationships. Church leaders have no power to revoke the God-given dignity that I possess.

When I see LGBTQ Catholics and allies clamoring over what the pope says, I worry that we are once again submitting our spiritual well-being to a man who should have little say in the matter. We must never substitute the words and actions of a capricious pope — however affirming he may seem at times — for the security that comes from knowing that we are loved and embraced by our Creator.

The pope's public statement on civil unions is, indeed, good news for LGBTQ Catholics and allies, but we ought to live and believe in such a way that the pope's words are unnecessary for our spiritual health. LGBTQ Catholics are a gift to the church because we help other believers identify and root out the homophobia and transphobia that sicken the Body of Christ. The pope may seem important, but queer believers are instruments of grace and healing who bring sense to the rest of the body.