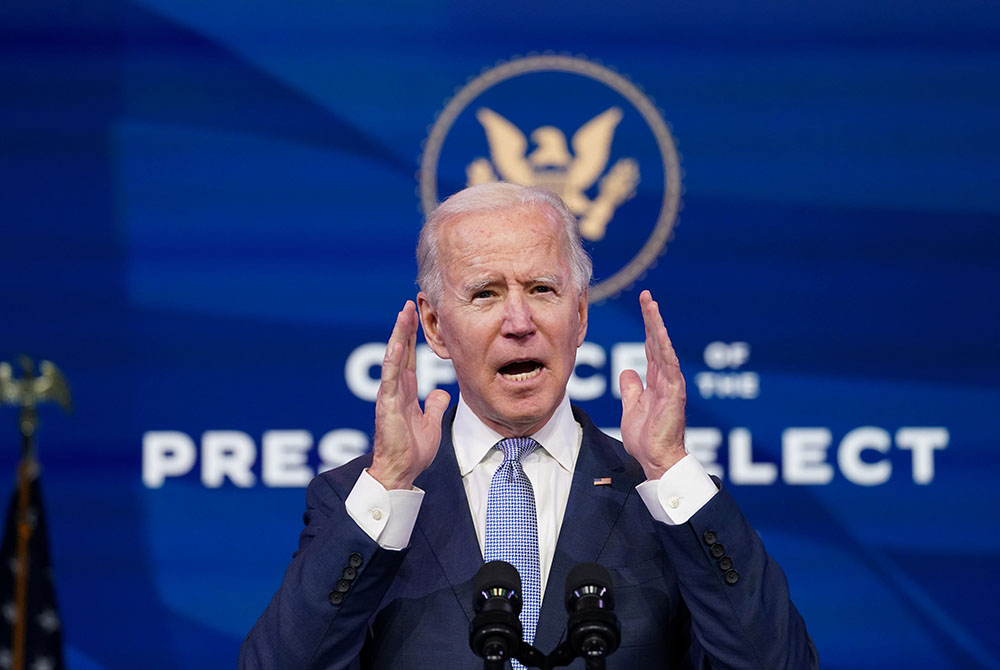 President-elect Joe Biden, speaking at a news conference at his transition headquarters in Wilmington, Delaware, Jan. 6, 2021, addresses the protests taking place in and around the U.S. Capitol in Washington as the Congress held a joint session to certify the 2020 election results. (CNS/Kevin Lamarque, Reuters) 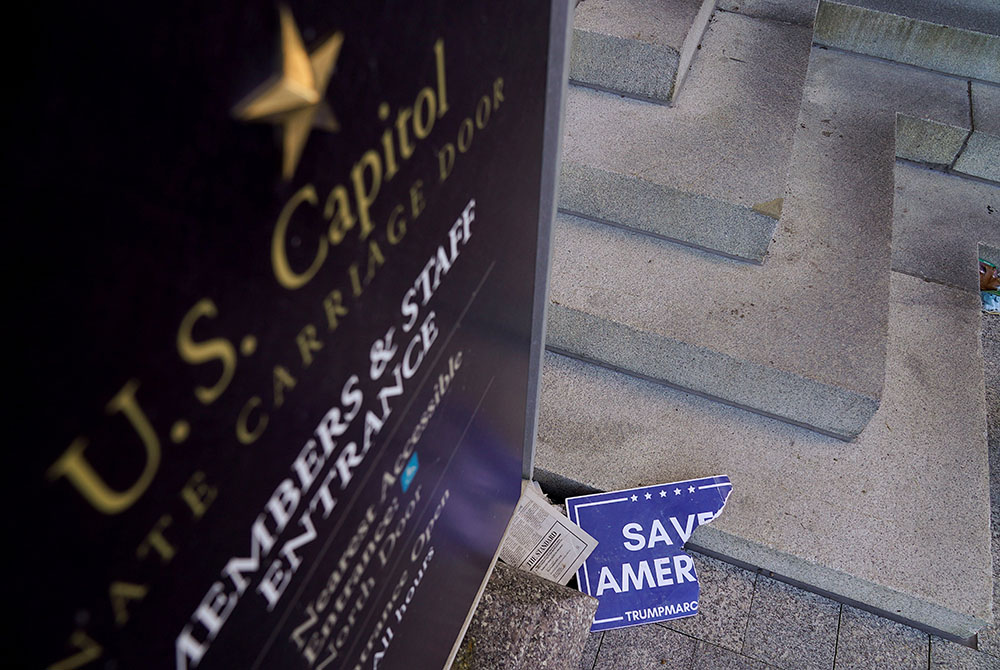 Scraps of a demonstrator's poster lays near the Senate Carriage Entrance of the U.S. Capitol in Washington Jan. 7, 2021, a day after hundreds of supporters of President Donald Trump occupied the Capitol. (CNS/Erin Scott, Reuters)

Earlier this week, there was an attempted coup d'état in the United States. It took place when rioters and insurrectionists stormed the U.S. Capitol, occupying the Senate chamber, and various offices — including the office of the Speaker of the House. A woman, later revealed to be one of the insurgents, was shot and killed; and three other people died because of "medical emergencies." The Confederate battle flag was carried into the Capitol. Robert E. Lee didn't even manage that. The attempted coup took place just two weeks before Joseph R. Biden Jr. is scheduled to be sworn in as president.

The first 100 days of a new presidential administration have never been more crucial.

First coined by former President Franklin D. Roosevelt, this benchmark for both the new president and the new Congress is arbitrary; nevertheless, it sets a legislative and policy tone for the remainder of the president's term with consequences extending far beyond U.S. borders.

The Biden administration will begin at one of the most pivotal moments in U.S. history.

In addition to the coup attempt, the COVID-19 pandemic has killed more than 363,000 Americans. The student loan crisis is an over $1.5 trillion national albatross that includes debt owed by millions who did not finish a degree. Climate change disasters have left many displaced, part of what experts describe as a looming catastrophic crisis. As of 2018, there were 2.1 million incarcerated Americans giving the U.S. the highest per capita prison rate in the world. The number of people held in immigration detention centers has grown exponentially since 2017.

Disproportionately affected by these various crises are people of color. 2020 shone the brightest spotlight we have seen in more than a half century on the ways systemic racism impacts our institutions and systems globally. The Biden administration must tackle systemic racism with the same urgency we would apply to rescuing someone who is drowning — people of color are in immediate, daily danger — from Native Americans, Blacks and Latinos being more likely to die of COVID-19, to women of color making up the majority of student loan debt holders, to Black women being more likely to die giving birth. 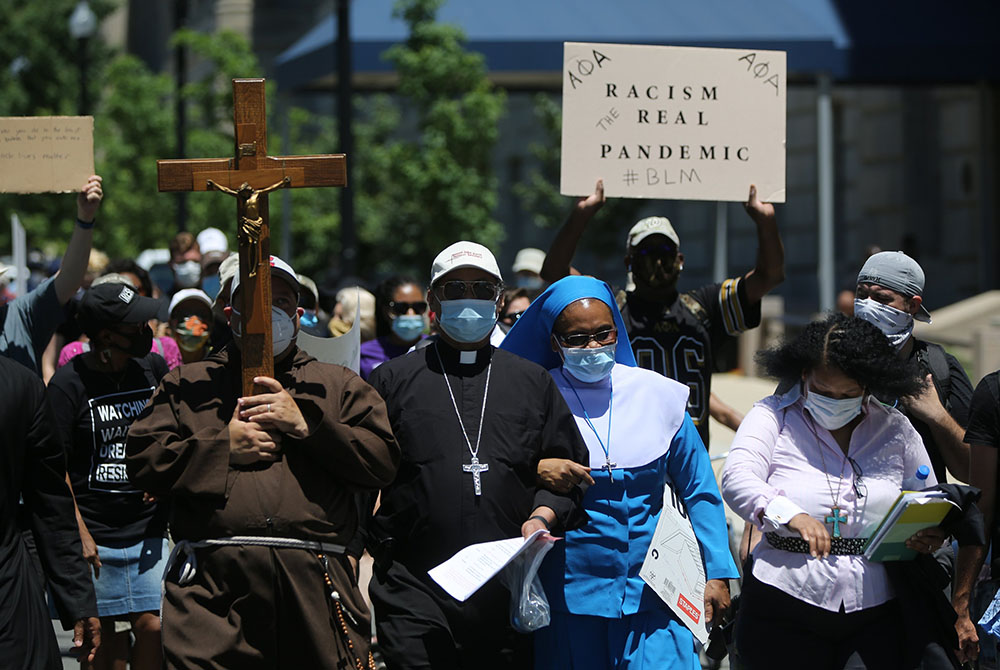 Washington Auxiliary Bishop Roy E. Campbell and a woman religious walk with others toward the National Museum of African American History and Culture in Washington during a peaceful protest June 8, 2020, following the death of George Floyd, an unarmed Black man in Minneapolis who has killed in police custody. (CNS/Bob Roller)

Systemic racism cannot be dismantled with one-off gestures that only placate those who benefit from systemic oppression in the United States. Such actions do not end systemic racism and their placating nature are at the foundation of what we saw on Jan. 6. The next presidency must take concrete action by canceling student loan debt, ensuring just wages and access to equitable health care, commuting Draconian, nonviolent prison sentences and working to create policies that offer protections from further destruction due to climate change.

This means thinking about all of these issues in new ways that benefit the whole of society. If we do that, we'll find that healthy people with good-paying jobs contribute to a tax base for schools and infrastructure. Freedom from the yoke of student loan debt increases spending potential and can lead to increased home ownership which is the primary way people in our society build wealth. A focus on climate change will address air and water quality, the needs of coastal communities, increasingly intensifying wildfires, and so much more.

These policies are a manifestation of the principles of Catholic social teaching. Seeing a Catholic president doing comprehensive anti-racism work while creating an understanding of systemic racism that is nuanced and transformative will force white people to understand the collective weight they bear for the damage systemic racism has done, and their collective responsibility to repair that damage. White Catholics in particular will see a president who shares their religious tradition but does not perpetuate the white supremacy that plagues our church. Rather, they will see a Catholic president who shatters it!

A crucial component of Biden's work in dismantling oppression must be centered in doing anti-racism work properly and sustainably and must be ready to push white people out of their comfort zone.

Solidarity means much more than engaging in sporadic acts of generosity. It means thinking and acting in terms of community. It means that the lives of all are prior to the appropriation of goods by a few. It also means combatting the structural causes of poverty, inequality, the lack of work, land and housing, the denial of social and labour rights. It means confronting the destructive effects of the empire of money.

In the weeks since the election concluded, President-elect Biden has shown that his Catholic faith is not divorced from the decisions he makes as a leader. He has indicated his desire to work with Pope Francis on shared concerns including climate change and immigration as well as his "appreciation for His Holiness' leadership in promoting peace, reconciliation, and the common bonds of humanity around the world." Heeding these words of Pope Francis requires the Biden administration to be authentically transformative in its approach to systemic racism. And the transformation can't just be in comparison to its immediate predecessor. The Biden administration must lead a transformation in how our society thinks and collectively speaks about racism.

Too often our society is stuck thinking about racism at a personal level, defining it solely as a prejudiced action one individual does directly to another. Focusing exclusively on the use of racist slurs, racist graffiti and the like allows white people to tell themselves and everyone else (but only themselves convincingly) that if they do not engage in these behaviors, none of this has anything to do with them. Viewing racism strictly as personal, individual discriminatory acts perpetuates the culture of white supremacy we see in our church and nation, and demonstrates yet another instance of a failure of imagination. More importantly, it lets white people off the hook and doesn't push them out of their comfort zone. The latter is essential if our society is to break down the barriers to inclusion, equality, and equity that are rooted in systemic racism.

A transformative societal mindset is a prerequisite for the transformative societal action we need. Using this lens, we can start to do the essential, painstaking work of examining societal systems. The absence of that work is one reason we saw Capitol police posing for selfies with insurrectionists. If we do the hard, honest work, what we will find is that some of our systems are so corrupt and so harmful that they cannot be fixed. Rather, they must be dismantled and rebuilt.

My own anti-racism work is an additional layer to my academic research on systemic racism in the Catholic Church and how that racism impact African American Catholic identity. The #BlackCatholicsSyllabus, which I launched this past summer, "prioritizes the work of Blacks in order to center the voice of Black Catholics in the creation of their own narrative." I also do speaking engagements and consulting for organizations around institutional structures in order to dismantle systemic racism and rebuild social structures with the foundational equity that is needed. However, everything I've discussed here is anti-racism work because systemic racism is everywhere. As the Biden administration prepares to lead, the system for running the country that the President-elect has built must operate with this transformative mindset. If not, we will just continue to move in the same loop that we've been in as a society for generations. We haven't come to this moment in history only to turn the page and end up back where we started.

If the Biden administration is truly to be transformative, it must lead our society toward thinking about racism at the social and systemic level and understanding the difference between that and personal-level racism. Until then, any anti-racism work done by the Biden administration will be weak and ineffectual. When we, as a society, start to really, deeply think about racism in terms of societal systems, we will be compelled to think about the ways our social systems are harmful and destructive.

If we don't do this work and do it now, what we saw on Jan. 6, 2021, will not be the last time we see insurrectionists at the Capitol.