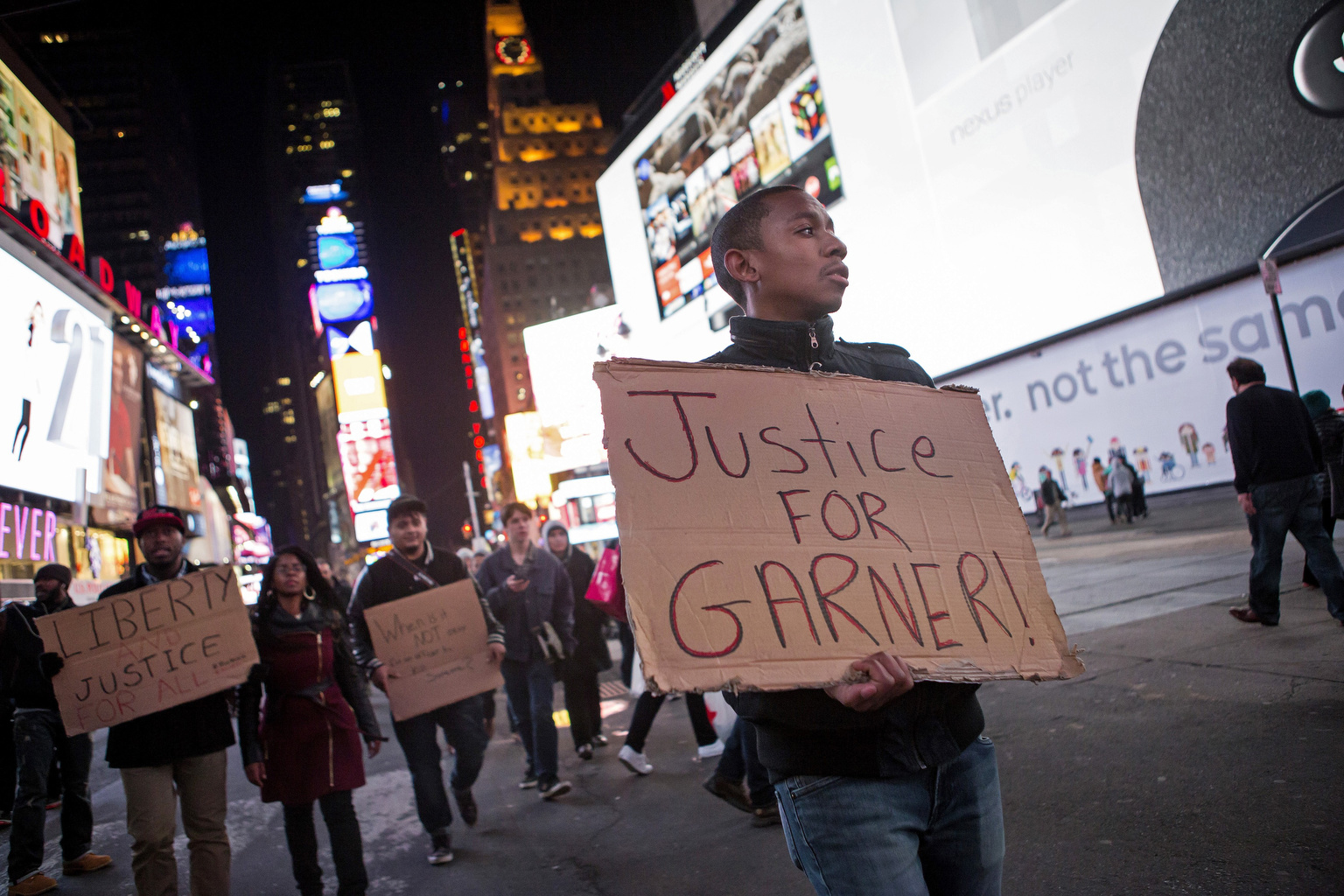 People protest against the death of Eric Garner in the Manhattan borough of New York Dec. 3, 2014. Thousands of protesters shouted at police and clogged streets of Manhattan, angered by a New York City grand jury's decision not to charge white Police Officer Daniel Pantaleo in the chokehold death of the unarmed Garner. (CNS photo/Reuters/Eric Thayer)

Last week marked the 5th anniversary of the homicide of Eric Garner, as ruled by the New York chief medical examiner on August 1, 2014. It was also the week when it was announced by the Justice Department that there would be no federal charges against the officer, Daniel Pantaleo, who used the chokehold that led to Garner's death, as it could not prove that the officer "acted willfully."

Meanwhile, Ramsey Orta, Garner's friend who had recorded the cellphone video of the encounter with NYPD, has been in prison since October 2016 and has at least six more months left on his term. Orta's story and how he lost his freedom after making his recording, is perhaps best told by Chloé Cooper Jones in her article, "Fearing For His Life,"which lays out the disturbing series of events that have plagued Orta ever since that day on July 17, 2014. In the final lines of the article, Jones asks Orta if he would have done anything differently if he had the chance to go back in time, such as not filming what happened to his friend. He responds, "What does it matter?"

What does it matter? It's perhaps the most honest, most revealing, and most pressing question that Ramsey Orta could have posed. It's a question that people of color or anyone else on the margins of our foundationally racist republic have been asking since the first "divide and conquer" tactics were deployed by the elite upon poor African and European indentured servants in the Thirteen Colonies during the 1660s-70s, before all Africans in the colonies had been permanently enslaved. Thus, the classification of "whiteness" was born to differentiate these groups who together had a common enemy and posed a threat to the aristocracy of the time (before this, people of European descent didn’t refer to themselves as white). The history of the United States — mostly told through a white lens or filter — demonstrates only partially how people of various backgrounds have been victims of marginalization and discrimination. For example, the Catholic Church in the United States has contended with racism internally (e.g., discrimination against Black Catholics) and has also been victimized by religious prejudice and nativism in the larger society. Still, the broader story of marginalization and its systemic effects as experienced by people of color is too often overlooked in society as these struggles continue.

As a Capuchin Franciscan, the repairing and rebuilding of relationships is critical to our charism. We have the example of St. Francis of Assisi crossing enemy lines during the Crusades and meeting with Sultan Malik al-Kamil in 1219. In 2019, this story opens doors for us all, who too often live as if they’re forever closed. The dialogue between the two men of faith did not end the Crusades. However, the encounter and their mutual respect of the other is both timeless as well as timely. As Gaudium et Spes reminds us, "Respect and love ought to be extended also to those who think or act differently than we do in social, political and even religious matters. In fact, the more deeply we come to understand their ways of thinking through such courtesy and love, the more easily will we be able to enter into dialogue with them." (28) Being able to recognize God in the other, realizing that one does not have the full story, nor will we ever in this life, are all critical lessons we need to recover in these times of polarization and racial demonizing of "the other" in society.

Ramsey Orta asks, "What does it matter?" This white friar (who has benefited from centuries of recycled privilege), hears it as a deafening cry for racial justice, for systemic equality, for the ability to not have to beg for the legitimacy of one's existence. It's a cry as old as the hills; it's a cry that St. Francis heard from lepers —and he answered. It's also a cry that both St. Francis and the Sultan heard amid the horror and destruction of war — and they answered. It's a question about when the crushing effects of racism will finally relent so the Eric Garners, Ramsey Ortas, Kalief Browders, and so many millions more who look like them can finally rest from having to plead (literally or figuratively) both in this life and from beyond the grave — "I can't breathe!"

The question remains, "What does it matter?"

Do we have an answer?

[Capuchin Br. Mike Dorn is chair of the Province Justice Peace and Integrity of Creation Commission for the Capuchin Franciscan Province of St. Joseph, based in Detroit.]