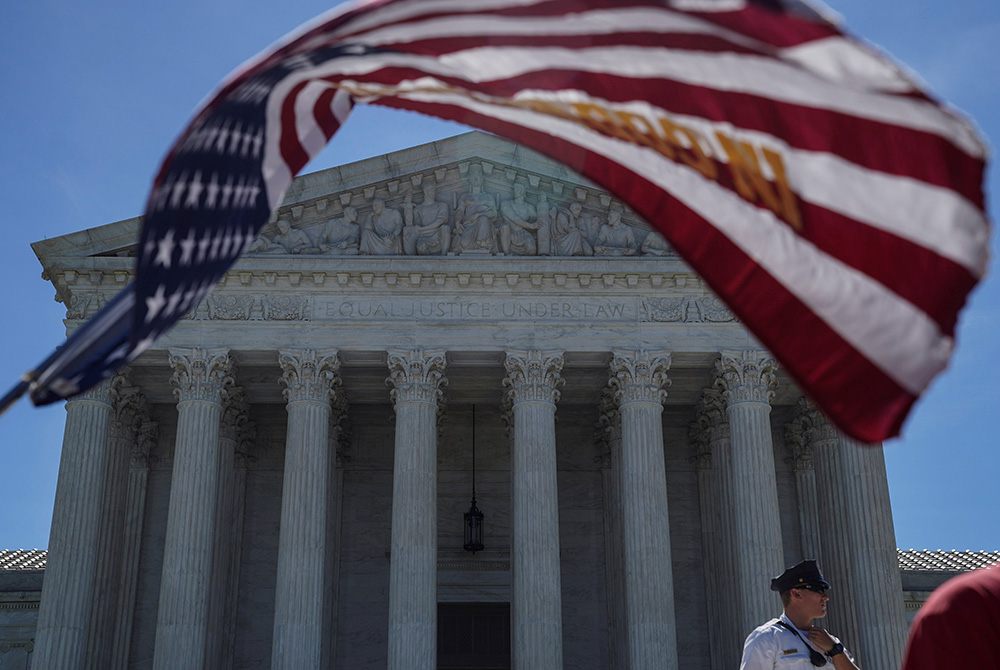 A U.S. flag flies in front of the Supreme Court June 25, 2018, in Washington. (CNS/Reuters/Toya Sarno Jordan)

U.S. courts are increasingly leaving to religious believers and institutions the decision whether or not to obey certain laws that apply to most everyone else. One way to view this trend is as an overcorrection on the part of judges who are striving at all costs to avoid entangling courts and churches. But another perspective — not incompatible with the first — is to see an opportunity for believers to hash out some of the most important moral and ethical issues of our time within, and not just outside, religious spaces.

How did we get here? In the past few years, the U.S. Supreme Court has handed down a series of rulings that represent a laissez-faire approach, dodging the biggest questions or else deferring to religious institutions in controversies involving faith. First, in 2018 the justices decided Masterpiece Cakeshop Ltd. v. Colorado Civil Rights Commission, dismissing a civil rights complaint against a Colorado baker who refused to make a custom cake for a same-sex couple celebrating their marriage. The court's reasoning, 7-2, was that the state civil rights commissioners who originally heard the case had been hostile to the baker's beliefs.

Then in 2020, the court decided, again 7-2, that two Catholic schools in the Archdiocese of Los Angeles were exempt from laws prohibiting discrimination in employment on the basis of age and disability. In Our Lady of Guadalupe School v. Morrissey-Berru, the court found that two grade-school teachers were "ministers," and therefore, under the First Amendment, the government could not enforce antidiscrimination laws because to do so would interfere with the church's right to choose who teaches the faith.

In the fall and winter of the pandemic, after Justice Amy Coney Barrett replaced the late Justice Ruth Bader Ginsburg, the court invalidated several sets of state COVID-19 regulations because they treated religious institutions disfavorably in comparison to what majorities of the justices believed were counterpart secular businesses.

And then two weeks ago, as it neared the completion of its annual term, the court unanimously concluded that the city of Philadelphia could not require Catholic Social Services to place foster children with same-sex couples. In a narrow opinion, Chief Justice John Roberts wrote that because the Philadelphia law at issue allowed case-by-case exemptions, the city had to grant exemptions for religious reasons too.

Lower courts have followed suit with similar decisions, including one involving a Catholic university whose faculty attempted to unionize.

Overall, this line of cases represents a worrisome trend within some corners of the U.S. judiciary. Some judges believe that courts are obligated to stay out of many disputes involving religious institutions. Believers and their shepherds should be the ones to sort out their differences using whatever internal processes might be available, even when disputes involve secular considerations like employment and labor relations, defamation and personal injury, or discrimination in the provision of goods and services.

This laissez-faire approach has not gone without criticism. And rightly so: It is not clear that all, or even most of, the framers of the Constitution believed the First Amendment deprived the judiciary of the ability to decide quite so many cases involving religious institutions. Some of the most influential early U.S. leaders, including Thomas Jefferson and James Madison, insisted that despite what Jefferson famously dubbed the "wall of separation" between church and state, government must hold religious institutions accountable when their actions affect the "peace and good order" of society at large.

It is important for advocates and legal scholars to attempt to persuade judges that the Constitution does not mandate a laissez-faire approach whenever a case has even a modest whiff of theological significance. But that will likely not be enough. The combination of precedents recently laid down and like-minded judges recently appointed means that changes in legal doctrine will be slow in coming.

Catholic social teaching has long held that just because something is legal does not mean it is moral.

So for religious progressives, it may be necessary to find another, perhaps more productive way to respond to some courts' hands-off approach. And that is this: by stepping back from many disputes involving religion, courts have opened space for religious believers and institutions to decide for themselves what is ethical and just.

To put it more bluntly, just because courts have given permission for religious institutions to behave in ways that would normally violate the law does not mean institutions must avail themselves of that freedom. Catholic social teaching has long held that just because something is legal does not mean it is moral. That principle applies to the church's policies and practices just as much as it does to the government's.

So what are the questions Catholics need to be asking within the church? Looking back at the kinds of cases courts have recently decided, here are just a few:

These and similar questions, as Craig Ford has recently argued in NCR, are fundamentally theological rather than legal. They ask how the church and its institutions should live out Catholic social teaching in our complex, messy present. They require careful reflection on what is and is not moral, what is and what is not the church's role in a pluralistic democracy. And as a result, they are questions that judges and courts are not especially well equipped to answer. The church, meaning the whole people of God, needs to answer them for ourselves.

To take just one example, discrimination in employment, the analysis might start from the principle that the church must manage its internal affairs justly. In 1971, the Synod of Bishops wrote in its powerful document "Justice in the World" that "[n]o one should be deprived of his ordinary rights because he is associated with the Church in one way or another" (Paragraph 41). There may be room for reasonable people to disagree about what baseline qualifications, religious or otherwise, the church should require of its employees. But the synod's document simply does not authorize, as the editor of America put it last year, an "indiscriminate purging of church employees simply because they hold unorthodox views or have made life choices that do not accord with Catholic teaching."

This kind of analysis — a dialogue of parrhesia, as Pope Francis might put it — belongs and should be cultivated in church spaces of all kinds. Where members of the hierarchy are unwilling or unable to lead these conversations, it belongs to all God's people "to hear, distinguish and interpret the many voices of our age, and to judge them in the light of the divine word" (Gaudium et Spes, 44).

So while attorneys and public policy advocates push uphill against the laissez-faire stance that some judges appear to be taking, all believers have work to do inside our churches and other religious institutions. Let us urge faith leaders not to seize every immunity the law might make available. Let us make clear that, if the church is to regain its credibility as a witness to the reign of God, the way its institutions operate must reflect its deepest convictions about what is just.